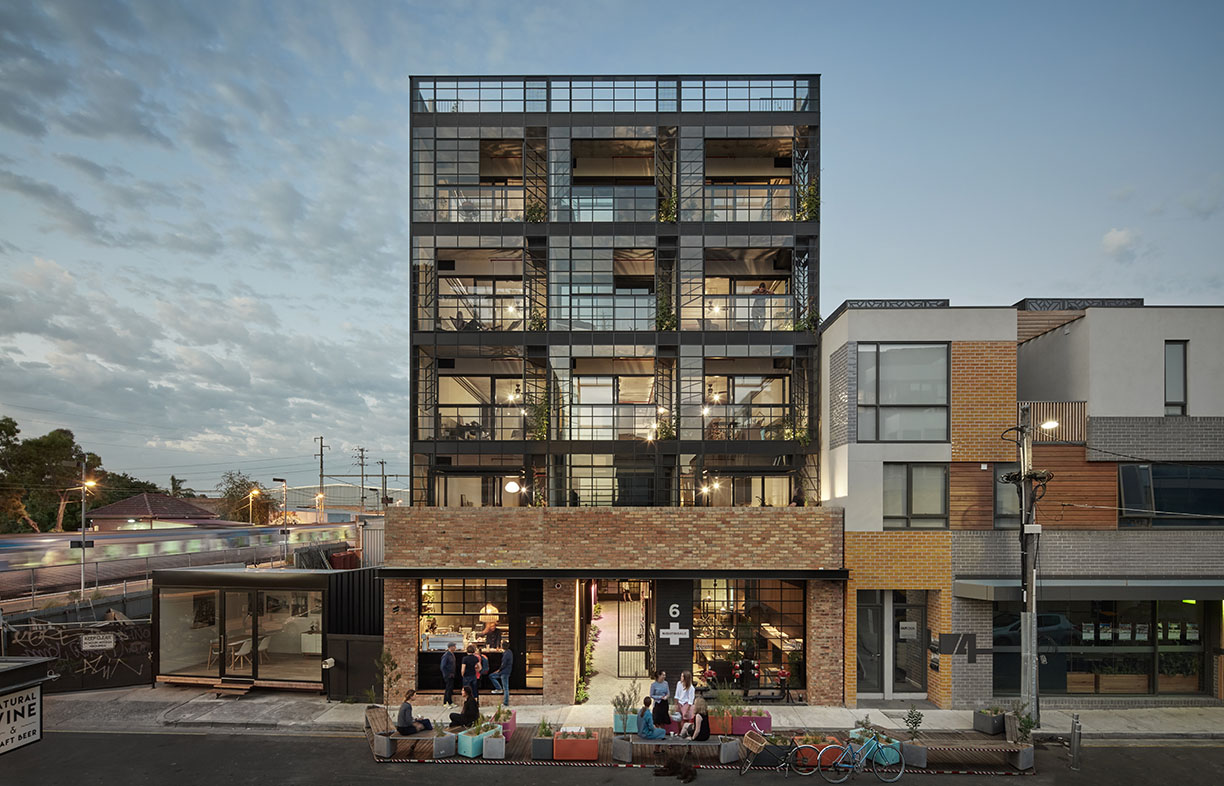 The first development built under the model, Nightingale 1 features 20 one and two bedroom apartments, with cafe space and office space for small businesses at ground level. It connects generously with Florence St. Photo: Peter Clarke

Nightingale Housing skips over the traditional, profit-driven property development model to instead deliver affordable and beautiful apartment communities that people are clamouring to live in. So, what’s their secret for success?

Have you heard of the Nightingale model? It’s no surprise if you have, given the buzz around this innovative, architect-led approach to apartment development that has a firm triple bottom line for success: social, environmental and financial sustainability. With its first building complete and a further dozen under construction or in the planning stages, the model is taking giant strides in showing how sustainable, mid-rise living can be done in Australia – and proving that it can be popular: there are currently several thousand people on the waiting list for a Nightingale apartment. We last looked at the model three years ago in Sanctuary 33, when Nightingale 1 was still campaigning for planning permission; how has it evolved since then?

The initiative of Jeremy McLeod of Breathe Architecture (he’s now also managing director of Nightingale Housing), the project that led to the development of the Nightingale model was The Commons, a well-known 24-apartment community built next to the Upfield train line in Brunswick in Melbourne’s inner north. Designed with input from the future residents, The Commons has impeccable environmental credentials and also deliberately fosters a sense of community, with features such as a rooftop garden, shared laundry, and cafes at street level. Access to transport was a big priority in site selection, and there is no car parking provided; instead, there’s parking for 72 bikes, and two carshare cars right outside. 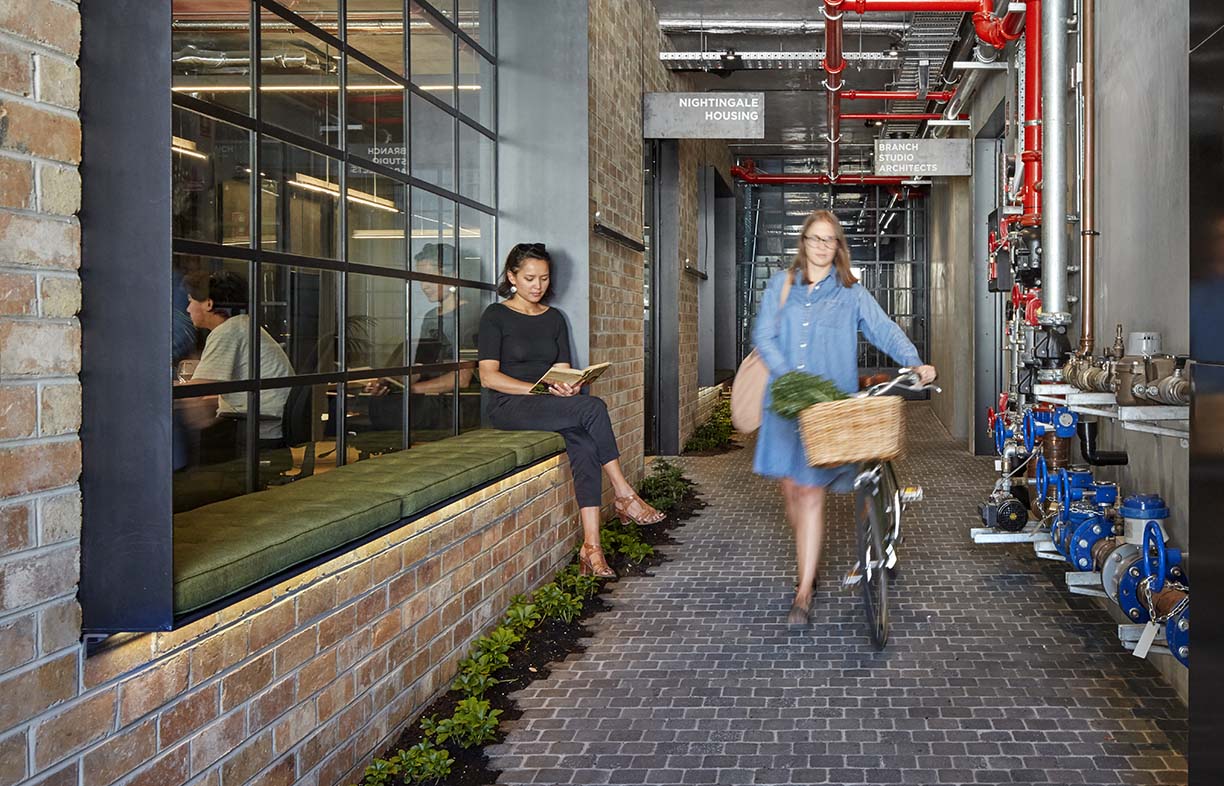 The entry at Nightingale 1 is open to the public during the day and offers access to toilets and a place to sit out of the weather. It’s all part of the commitment to social sustainability and engagement with the local community. Photo: Peter Clarke

The main learnings from The Commons project were financial. Having had to bring in an ethical developer to get that project over the line, thus relinquishing some control over the design and delivery, Jeremy and his team realised that “the answer to achieving the triple bottom line is in the design of the finance, not the design of the building. By designing the financial model, we’ve taken control of the outcomes: environmentally sustainable, community-driven housing effectively at cost.”

Unlike the traditional developer model, Nightingale projects are crowd funded by ethical investors – including architects – and future residents. Profits are capped at 15 per cent, helping to keep the purchase price of apartments affordable and removing any incentive for the development team to cut corners on the build. The popularity of the model means that each project is completely pre-sold via a ballot from the waiting list, meaning huge savings on a display suite, marketing and real estate agents. It’s a win for the lucky purchasers: Jeremy calculates that the 20 apartments in Nightingale 1 – a mix of one and two-bedroom, compact but well-designed spaces – sold for around $100,000 less than the general market price in the area, and in fact $109,000 of unspent construction contingency money was recently returned to the apartment owners, not something you often see in the property industry.

Getting the future residents of the building on board early is important for other reasons, too. They are able to give input into design decisions, such as whether to include car parking. “We survey residents on issues like these,” explains Jeremy. “At Nightingale 1, most of our purchasers didn’t own a car; around a third didn’t even have a licence. The extra $37,500 per apartment it would have cost to excavate for an underground carpark just wasn’t a priority for them.” At Nightingale Brunswick East, though, currently under construction on Nicholson St, the demographic is different and the vote was for car parking.

Encouraging the purchasers to be heavily involved in the whole process also allows for an important kernel of community feeling to develop early. Kate and Jason live with their baby daughter Henrietta in a light, bright north-facing two-bedroom apartment with a generous covered balcony on Nightingale 1’s fourth floor. They were renting in The Commons when Jeremy launched his next project, and immediately expressed interest in buying an apartment. (The Nightingale 1 ballot gave priority to renters in The Commons; a way of bringing a ‘starter culture’ from one building to the next, explains Jason.)

“Having lived at The Commons, what we loved most was the sense of community,” says Kate. “Everyone looks out for each other. We’ve only been here since December, but we already know everyone in the building because we’d already met plenty of times and had community input into planning decisions.” She adds that before The Commons, she’d never known her neighbours. “I didn’t even know I wanted it, but it’s really wonderful.” 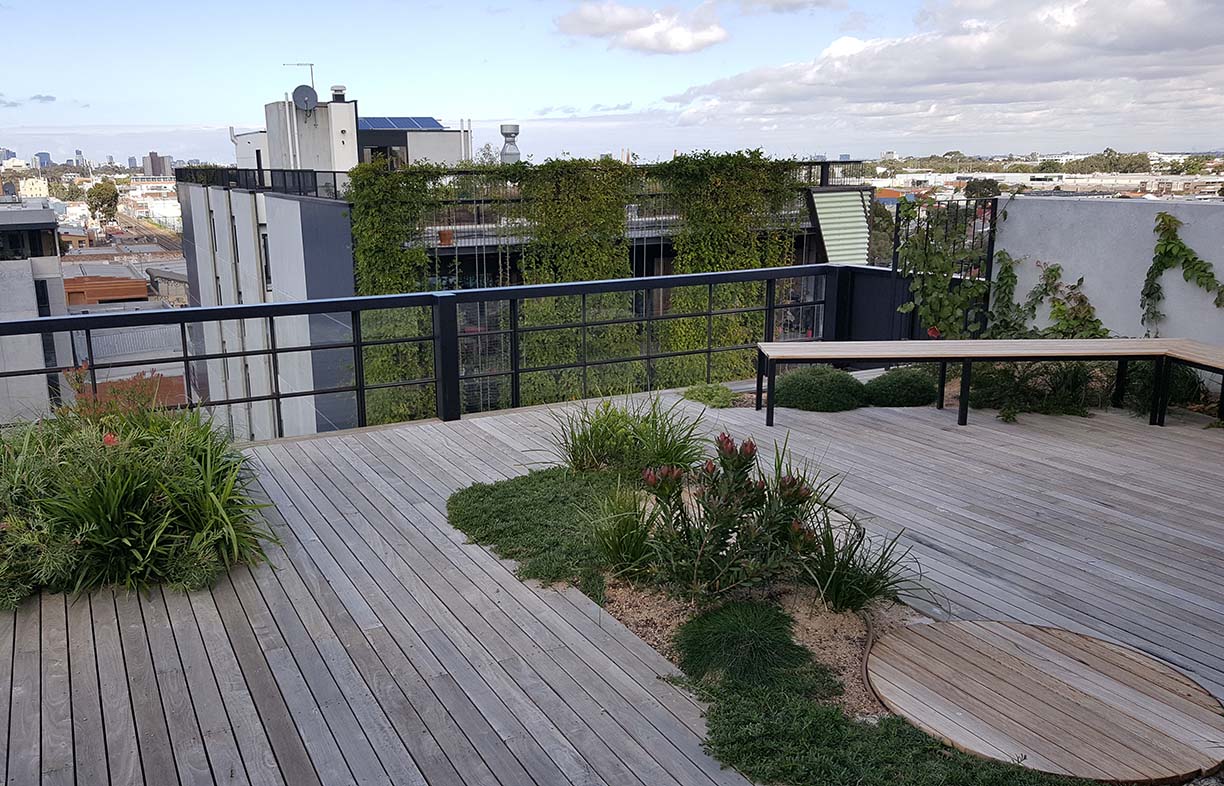 Nightingale 1’s shared roof garden is a focus for community interaction. Lawn, decked areas (with sandpits under circular covers) and a roofed BBQ and eating area make up one end, and a shared laundry, washing lines and extensive planter boxes for communal vegie growing occupy the other. Residents can wave to their neighbours at the Commons, the prototype for the Nightingale model.

The apartments at Nightingale 1 are entirely owner-occupied, something that the Nightingale model tries hard to ensure. “We’re building housing for people to live in, to have a good life in, to build a community,” says Jeremy. A ‘restrictive covenant’ on resale of apartments is one of the newer key elements of the model: purchasers undertake that should they want to sell, they will accept a price capped at what they paid plus an indexed amount based on median apartment prices in the suburb, and the apartment will be offered first to the Nightingale Housing waiting list. This discourages investors interested in property speculation, promotes owner-occupancy and a sense of community, and is vitally important in keeping the apartments affordable even as awareness of the advantages of the Nightingale approach – and demand – grows. (The Commons doesn’t have the covenant, and a 72 square metre two-bedroom apartment recently sold for the considerable sum of $755,000 on the open market.)

Mia and Nic also bought at Nightingale 1 after tasting the lifestyle at The Commons. They love living in a building that’s achieved such high sustainability standards. “We have such low bills, and our space is warm in winter and cool in summer without us really having to do anything,” says Mia. She feels that the model really works to keep housing more affordable. “If we worked full time, we could have afforded to buy a more expensive place, but we both wanted to work part time while our daughter Wren is small. Nightingale meant we could buy and still do that.”

She’d like to see such apartments accessible to as wide a range of the community as possible. “We need more supply, and better prioritisation of the ballot so that true low-income earners get a decent look in.” Jeremy agrees, and says that the ballot process is constantly evolving, most recently to give greater priority to people in essential service roles like teachers and nurses.

Set up on the back of the success of Nightingale 1, Nightingale Housing is the entity that handles the legal frameworks that allow the development of other projects under the model. “There’s a formal licensing process for architects interested in doing a Nightingale building,” explains head of business development Lola Digby-Diercks. “As well as capping profits, they must undertake to meet certain environmental benchmarks, including no gas in the building and a minimum 7.5 Star NatHERS rating. Their design must also have a social sustainability focus, responding to the local community and adding to the streetscape.” Once the architect is licensed and the purchasers are balloted, Nightingale Housing hands over the project to the architect for delivery.

There is no shortage of interested architects, and Jeremy says ruefully that Nightingale Housing’s biggest challenge at the moment is keeping up with demand. There are currently 10 live Nightingale projects around Melbourne and one in Fremantle, WA – which has just received planning permission – plus another seven licensed architects around the country getting ready to launch into their projects. 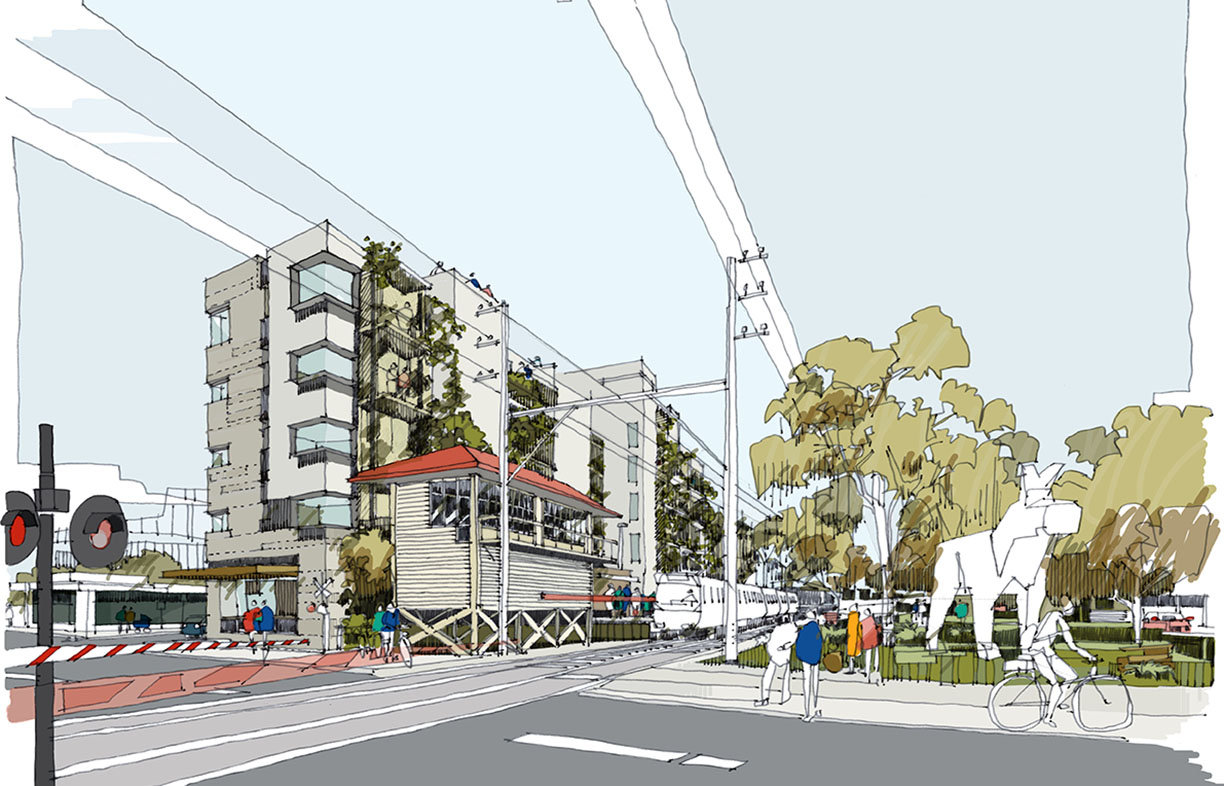 Nightingale 2 is currently under construction next to Fairfield station in Melbourne’s inner north. Designed to the Nightingale model by Six Degrees Architects in collaboration with Hip V. Hype, the development consists of 20 apartments and three ground floor retail tenancies designed to help with street activation and improve the amenity of the station precinct. The apartments have an average NatHERS rating of 8.6 Stars. Artwork: Simon O’Brien, Six Degrees Architects

Seven of the Melbourne buildings belong to Nightingale Village, a precinct-sized application of the model just a short hop from The Commons and Nightingale 1. It’s a chance to push the boundaries of affordability even further: “We’re planning to include studio apartments under 30 square metres,” says Lola. “They would cost around $200,000, which for a first home buyer is a completely different proposition to waiting until you can buy a $400,000-$500,000 apartment.”

Monique Woodward is a director at WOWOWA, one of the architecture firms designing a building for the Village. She’s excited about the collaborative design opportunities afforded by the larger-scale project: “The collective is a diverse mix of older more established firms, celebrated medium scale firms and ambitious emerging practices. We have a peer review process, which is incredibly rewarding – it’s a great example of multi-generational teams working together, supporting emerging practices to gain experience with bigger projects.”

“As the youngest, we’re passionate about providing a truly affordable product that appeals and is accessible to Generation Y,” she goes on. Their project, NGWOW, will be offered under the German-developed ‘baugruppen’ financial structure, essentially a further tweak to the Nightingale model that gives purchasers the ability to invest their funds in the development, allowing GST and stamp duty savings and thus even further reductions in purchase price (up to 30 per cent lower than market value). [See the Nightingale website for more information on baugruppen: www.nightingalehousing.org.]

Monique believes the Nightingale model is a robust one that will be “an incredible game changer. It will change the way all apartment projects are delivered in Melbourne and Australia by proving that people want a different product – something designed with love and with a focus on social amenity, sustainability, affordability and community.”

The latest development in this remarkable story is the establishment of a $300 million finance fund, which will give Nightingale Housing surety of finance. “Land acquisition is one of the main limiting factors for us at the moment,” says Lola, “so this fund will really help the full scalability of the Nightingale model.”

So it’s all systems go for Nightingale. “We think of it as building housing, not as development,” says Jeremy. “Until the market corrects itself – until everyone has the chance to buy their own more affordable housing – we’ll keep going.”

What’s in a name?

Getting its start on Florence St, Brunswick, site of The Commons and Nightingale 1, the Nightingale model takes its name from visionary nursing campaigner Florence Nightingale; its founders imagined it as the ‘Florence Nightingale’ of housing, transforming the way we deliver affordable, sustainable shelter in the way that Florence transformed nursing in the second half of the nineteenth century. 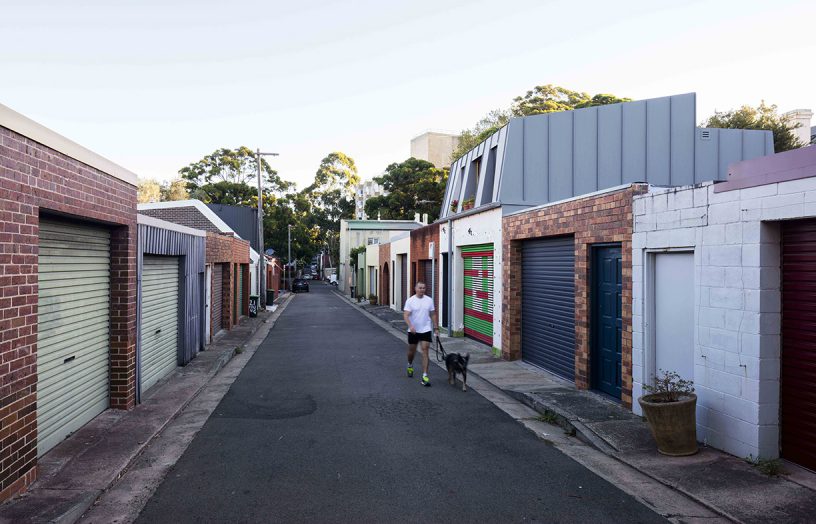 A better way up

This studio dwelling above a laneway garage in inner Sydney is both a comfortable, compact place to live and a benchmark for this type of development. 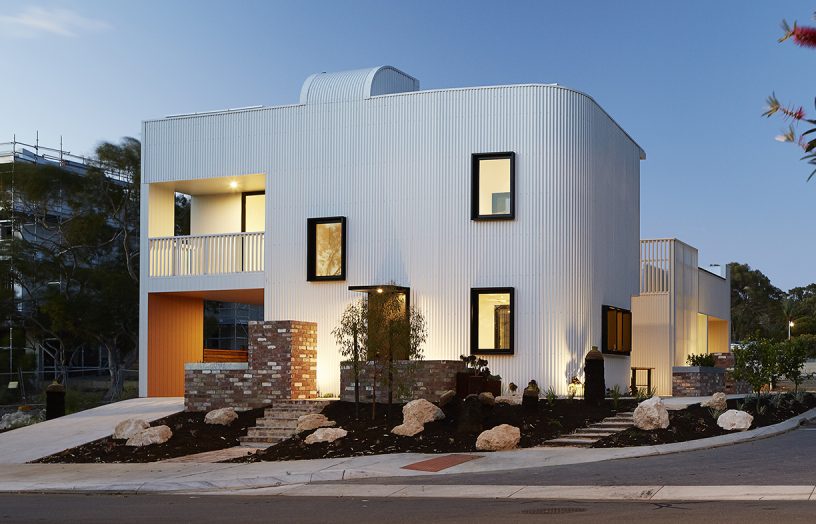 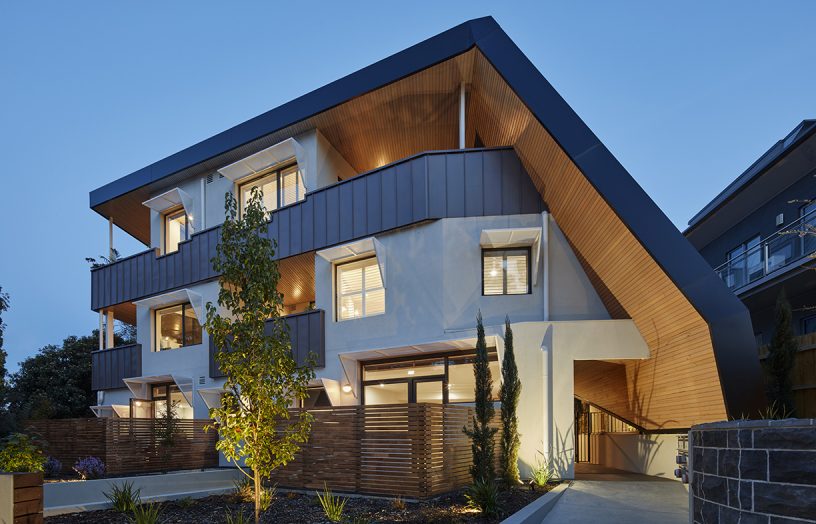 With abundant natural light and ventilation, this new 8.6 Star apartment building is an exemplar of urban densification done well. 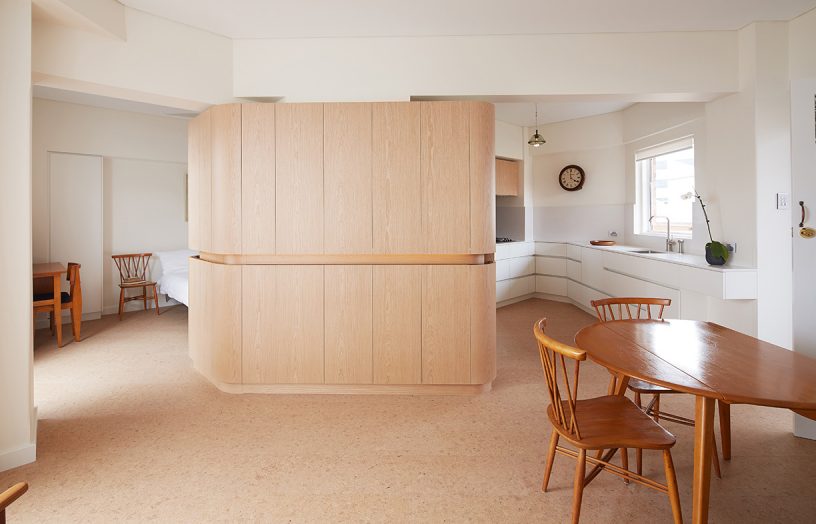 Downsizing can be an emotional as well as logistical challenge, but such a mega transition can be made easier when the new home is designed to last a lifetime.