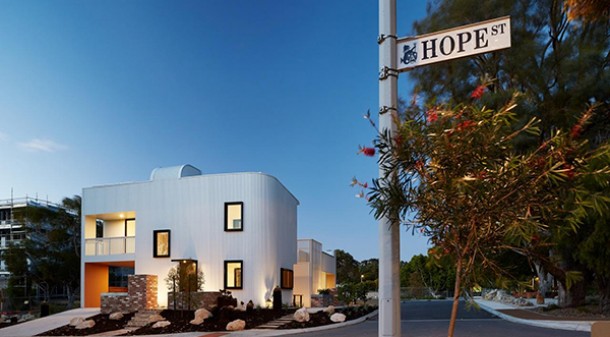 The development’s location on the White Gum Valley estate, within easy reach of many services and close to central Fremantle, is an important part of fulfilling the brief of targeting the needs of 'Generation Y'. 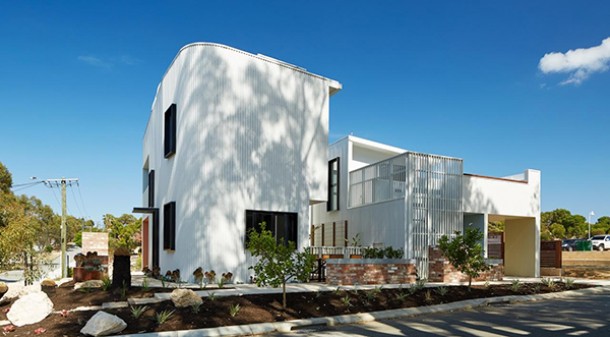 Clad in Colorbond for its durability and low maintenance requirement, the Gen Y House is actually a compact complex of three strata-titled apartments. 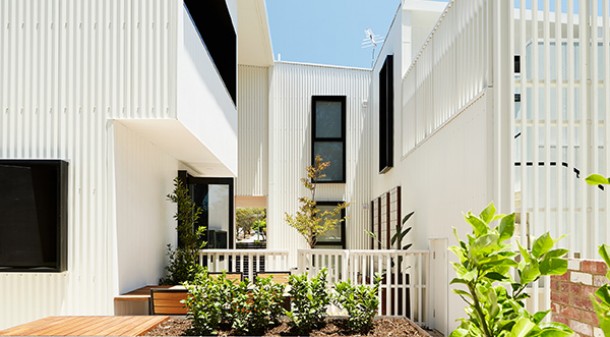 The layout of the three apartments allows for northern sun access and cross ventilation to each, and they all have their own private outdoor space.
< 1 / 3 >

At a glance, the Gen Y House in the White Gum Valley estate a stone’s throw from central Fremantle is just that: a two-storey house. In fact, it’s a cleverly designed three-apartment strata complex specifically designed to “reconceptualise what is achievable when community, sustainability and cost are prioritised equally,” as its designer David Barr explains. It was the winning entry in Landcorp’s Generation Y competition, which called for an affordable housing solution accommodating 3 to 6 adults on a single 250-square-metre residential lot.

“We studied a variety of requirements in depth,” says David. “We aimed for a balance: delightful spaces to live in that were still attainable for someone buying for the first time.”

To keep costs down, David and his team opted to keep the apartments small: at 44 to 50 square metres each, they have a combined internal area that is less than the average Australian home. Each has its own kitchen, bathroom and laundry as well as a generous private courtyard or balcony; they also have access to shared outdoor space. “We compensated for the smaller interior spaces with larger windows, visual connections to the outdoors, and carefully planned layout,” says David. “And the location has its own compensations: the White Gum Valley estate offers parks and it’s an easy bike ride from Fremantle.”

Other cost-saving measures included choosing pre-finished materials that wouldn’t require maintenance, such as Colorbond cladding on the exterior, melamine for cabinetry, and prefabricated roof panels. The kitchens and bathrooms in the three apartments are identical, to take advantage of economies of scale. “There wasn’t one magic solution, rather a number of things that all helped to minimise tradespeople’s time on site and keep the cost down,” David explains.

Sustainability was never compromised, though. All apartments have access to northern light and cross ventilation; the complex has 10,000 litres of rainwater storage that is plumbed to the laundries and toilets, and share a 9kW solar PV system with battery storage. David and his team had a life cycle analysis of the building completed using the Etools software, and determined that it would have a 98 per cent reduction in operational carbon footprint over its life compared with a standard home.

The Gen Y House was completed in December 2016 and is currently open to the public for tours before the apartments are put on the market this autumn. Once it’s occupied, Landcorp is planning to run a ‘living laboratory’ project, monitoring energy and water use and interviewing residents about the experience of living there, and sharing the results.

David is very pleased with the finished project especially as the building is meeting needs beyond the brief. “It’s had a lot of interest from baby boomers wanting to downsize, and it’s also good for intergenerational living. It addresses the ‘missing middle’: a housing type in between single housing and large multi-residential developments.”