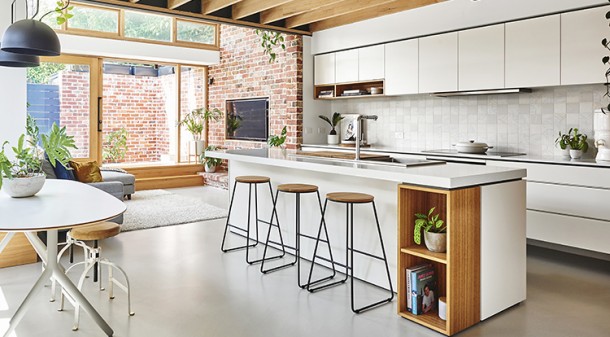 The compact but appealing living space sits at the back of the house, with large sliding glazed doors to the north. For the kitchen, Leanne and Scott chose benchtops made from 75 per cent recycled glass, mirror, porcelain and earthenware. 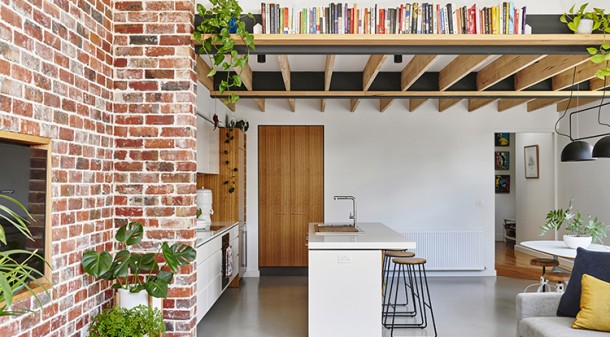 The living room’s brick feature wall, rich in thermal mass, was created from the pavers that Leanne and Scott had salvaged from the house’s original courtyard. The 40 or more indoor plants are an important part of the interior design strategy. 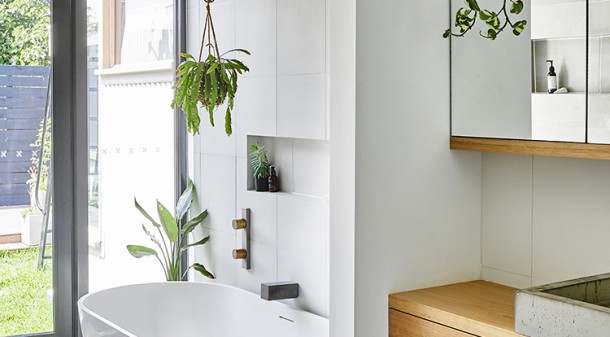 The plants were selected for their air filtering capacities, and the house is even equipped with a gadget that monitors VOCs and lets the residents know when they should ventilate. 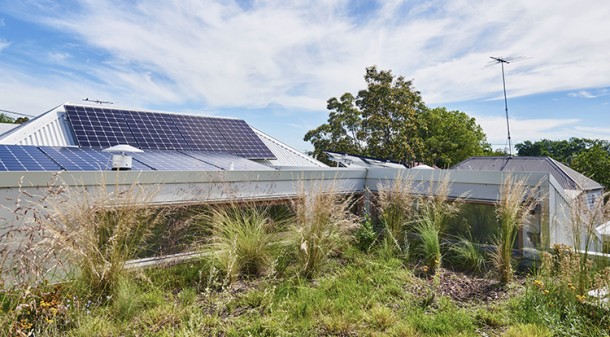 Planted with water-wise natives the green roof offers surprising green glimpses through the clerestory windows, and also boosts the insulative effect of the roof. A 4.5kW solar system helps power the house; timers turn on appliances to make efficient use of the solar electricity. 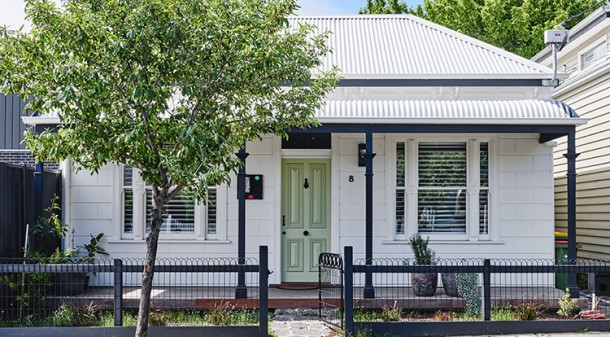 Leanne and Scott’s painstaking renovation of a 100-year-old, lean-to cottage in Melbourne’s Yarraville held enough painful lessons to defeat a less resilient couple. Instead, it converted these two from sustainability stalwarts to environmentally sustainable development evangelists. At Sustainable House Day 2017 the couple was humbled by the level of interest in their small home and have responded by opening the house to the public on scheduled dates to offer “some great ideas, useful contacts and the confidence to get going on your own sustainability project”.

At their first open house event in January this year, Leanne and Scott shared their philosophy of ‘abundant sustainability’. They aspire to make sustainable design so irresistible (“it’s not always about giving up something”) that the unconverted are inspired to adopt its principles. “If we can’t get the masses on board, we can’t solve the climate crisis,” notes Scott, who says they want “to do for houses what the Tesla Model S does for vehicles.”

The couple spent a year laboriously partially demolishing the small house by themselves and “uncovering its history”, says Leanne, who salvaged and hand-cleaned 800 Melbourne red brick pavers from the courtyard as part of this endeavour. With the help of local building designer James Goodlet at Altereco, they mindfully designed the renovation to “be here in another 100 years, for whoever comes after us.”

At a mere 100m2, the footprint is “nothing ambitious in scale,” says James, “but Scott and Leanne were happy to work with the space they had. It’s rare to get clients with that much passion about being sustainable.”

The house’s passive solar properties are impressive by any yardstick, but what makes it more Tesla S than GM EV1 is the couple’s meticulous attention to detail.

Their green roof was universally admired at January’s open house. Planted above the kitchen/living area with water-wise native plants, it creates outdoor space on the tight site and offers surprising glimpses of greenery through highlight windows. It also insulates the kitchen and living area from above, although, says James, it created a design challenge because “it needed a fair bit of loading, but we also wanted to expose the structure and beams in the lounge room beneath it. The green roof was a feat of engineering!”

In a 21st-century twist on the adage that a passive solar home requires active participation, Leanne and Scott’s house is run (in part) on auto-pilot. Electronic timers turn on the dishwasher, sprinklers, washing machine and water heater to take advantage of solar energy. Their thermostat is voice- and sensor-enabled, and the couple has set up geofencing which uses GPS to automatically respond to their movements. Scott and Leanne have also embraced off-the-shelf smart tech from some of the world’s best-known tech brands. Apple’s virtual assistant Siri turns on the hydronic radiator panels at different times in specific rooms. On a recent trip to the United States, the couple picked up Amazon’s virtual assistant Alexa which integrates with their smart LED lights and air con. Via a discreet monitor on the kitchen bench, “you can say ‘turn on light in kids room’, but you can also ask it to call Uber, or convert Fahrenheit to Celsius,” says Scott. Another gadget the couple picked up in the US “monitors VOCs in the house, and lets us know when we should ventilate”.

Disconnecting from gas and living in an all-electric house was always on Leanne and Scott’s agenda. But the high electricity draw of their heat pump (which supplies heat for hydronic heating and potable water) caused unplanned headaches when they were advised that the local power supply wouldn’t meet their needs. Reeling from the distributor’s quote of $10,000 to rewire the house to bring in three-phase power underground, the couple “did our own research and found out you can have overhead wires,” says Scott. Eventually, after daily phone calls and “stalking the director on LinkedIn”, the utility company agreed to connect overhead lines for just $1000. While most houses won’t require three-phase power, the experience provided Scott and Leanne with another key learning: “Do your own research and be resilient in the face of setbacks”.

Scott and Leanne are admirably transparent about “the tough stuff – we want people to be aware so they can approach their renovation with a realistic mindset.” They have disclosed the cost of their build (including professional fees) at $470,000, and share their energy consumption data to demonstrate that their ‘abundant’ lifestyle is both environmentally sustainable and cost effective (summer utility bills $45, winter bills $203). Their project website (melbournevernacular.com.au) offers kudos to tradespeople and suppliers who “worked with us to find solutions”, and is notably discreet about the builders they hired who, sadly, were sustainable “only in name”.

Shortly after they bought the house, an astonishing coincidence occurred. The couple learned that the house had once been the family home of a woman who was now caring for Scott’s ageing grandmother. The woman came to visit during Sustainable House Day last year. In spite of the house’s transformation, she immediately recognised the provenance of the brick wall in the living room. “I used to play on those bricks when I was a little girl”, she cried. The time invested by Leanne and Scott in endowing the house with a new life could hardly have had a more rewarding pay-off.