Many happy returns: 21 years of solar 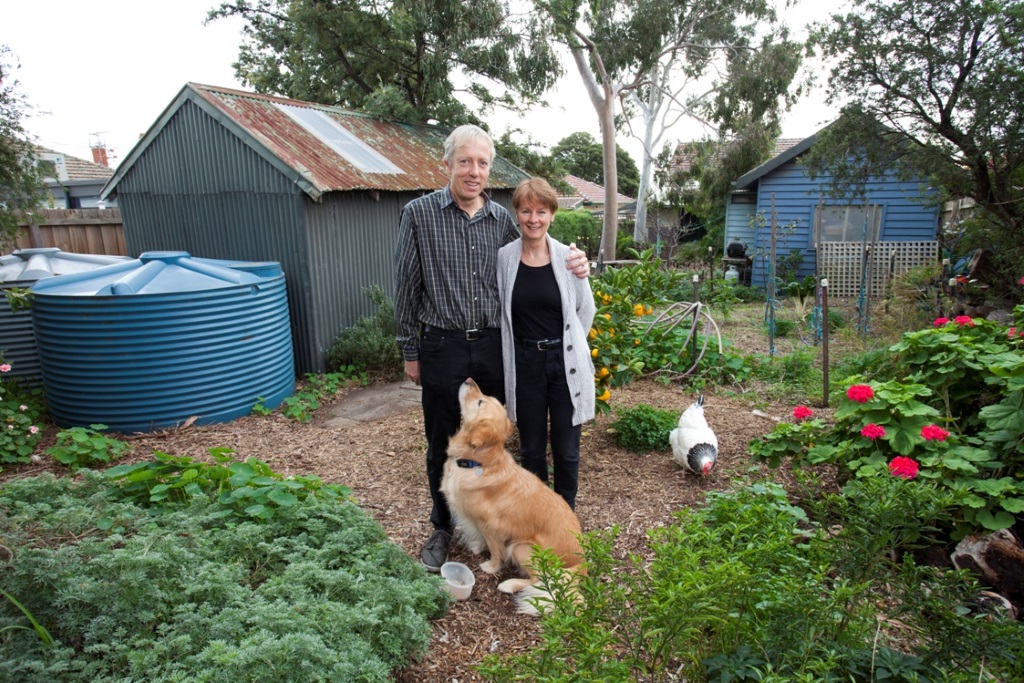 Stuart McQuire and Wendy Orams were second in Australia to install a grid-connected rooftop PV system and haven’t paid an electricity bill since 1996. Twenty-one years on, they speak to Kulja Coulston about their unflagging commitment to sustainability, and the solar snowball they helped start rolling.

Solar PV systems are now so ubiquitous in Australia it’s strange to think back to the time when they were a cutting-edge novelty. And yet recently when I visited Stuart McQuire and Wendy Orams’ West Brunswick house, my mind was taken straight back to the turn of the century. The last time I was at their place was 2002 – John Howard was prime minister and the Kyoto Protocol remained unratified. Like half of the other adults in the country, I still didn’t have a mobile phone.

Outwardly, their unpretentious 1929 Californian bungalow hasn’t changed much. The house is attractively surrounded with a mixture of native and productive trees. And the original 2kW of PV panels – the first to be connected to the electricity grid in Victoria – are visible on the red-tiled roof, albeit with a trim of lichen. This time though, instead of the sustainability features setting it apart from others on the street, just being a single freestanding house is what makes it conspicuous. Recent planning changes have rezoned heights in the area to four storeys.

“This street’s definitely in transition,” says Wendy. “My dad can remember catching the tram in the 1920s and this area was market gardens. It then became a suburban residential street with single house lots with garden around them. When we moved in there were already a lot of flats and units, but progressively the houses have disappeared and now there only a few on each side of the street.”

They originally bought the house with like-minded friends with a shared interest in environmental activism. Their central lounge room, now a quiet haven naturally lit through double-glazed skylights, became a meeting place for the couple’s various campaign interests, including the Rainforest Action Group through which they’d met in the 1980s.

“For a while our house was a hotbed of environmental and nonviolent activism,” laughs Wendy. “I had a new baby and it was great; I wasn’t one of those isolated young mums, we were having meetings all the time.”

Rainforest Action Group was part of the movement to halt tropical rainforest deforestation through disrupting the importation of timbers for use in the building industry. The global campaign successfully led to the establishment of the respected Forest Stewardship Council in Germany in 1993, and a range of other consumer transparency measures for paper and timber building products. “At that point pretty much every house in Australia was using rainforest timbers. The idea was to draw attention to that,” says Stuart.

How they came to be the second household in Australia to connect solar panels to the grid is really a story of serendipity. They’d heard of grid-connected solar via ReNew magazine, and in 1994 jumped on board with the local Brunswick Electricity Supply Department’s Aurora Project, which was experimenting with PV at CERES Environment Park. It had advertised for households to take part in a partly-funded trial.

Stuart and Wendy made contact and negotiated to pay a quarter of the 2kW system’s $20,000 price tag, a deal that was honoured when power retailer CitiPower compulsorily acquired the progressive Brunswick ESD the following year. “Even though we didn’t pay the full cost, the $5000 we put up was about 20 per cent of our family income that year,” says Wendy. “We didn’t own a car and could have bought one with that money, but we preferred to have solar panels.”

The panels were installed in September 1995, but generated nothing for the first six months. “They actually started operating on 4 April 1996,” says Stuart. “We went through the whole summer without them operating because there was no Australian Standard for the grid connection. CitiPower needed to work out how to do it, basically, and make sure their engineers were happy with how it was done.”

As part of the trial, they committed to opening the house to the public six times a year for three years. That sounds onerous enough, but they actually kept the tours going for many years beyond what they’d agreed. “We wanted to live in a way that matched our values so it made sense to make our home more environmentally sustainable,” says Wendy. “And, from an activist point of view, it was way easier doing open houses than getting arrested and locked up!”

Over the next decade thousands of people saw the house and its solar PV and hot water systems. Through Victoria’s drought years, public interest turned towards their water efficiency expertise. They have a beautiful permaculture garden, 20,000 litres of rainwater storage and a customised greywater system that, for a time, allowed them to all but disconnect from mains water.

“When we were doing publicity in the early days, the biggest question was ‘how long until the solar will pay itself off?’. It made sense, but we never considered that was important at all. You buy a new car and you don’t expect it to pay for itself. Or carpet. You decide on the quality and what you want it to do,” says Wendy.

“But it’s actually turned out to be something that has paid for itself. This really hit home in the global financial crisis when a lot of people lost a third of the money they had, and we had put our money into water tanks, water recycling and all these solar panels and so we had very few bills and all that investment was paying for itself.”

While the number of residences with solar remained small between 1996 and 2008, Australia soon started to experience a PV boom. The global retail price suddenly halved from the $12 to $14 per watt for the early solar power systems, to around $6 per watt. The plummeting solar cost curve coincided with the introduction of feed-in tariffs. Until then, early adopters had effectively received the standard retail price for electricity when their mechanical meters ran backwards.

The chart tracks three trends in solar energy system pricing and installation in Australia. The black line shows the major shifts in the price of installed solar PV in dollars per watt from 1996 to 2017. The green shading indicates the cumulative number of residential rooftop systems since the first were installed around 1996. The red shows Victoria’s feed-in tariff rates in cents per kilowatt-hour (the dotted line indicates when meters ran backwards, effectively delivering a feed in tariff at the retail rate).

When Victoria introduced a feed-in tariff of 60 cents per kilowatt-hour in 2009, Stuart and Wendy installed a second 1.5kW system, in case they wanted to run an electric vehicle in future. With the two systems combined, they began to earn a modest income. “We get the premium feed-in tariff for both systems. In the last 12 months we received a $1400 credit, after the supply charges,” says Stuart.

Even for those that came in late, the economics of solar in 2017 has never been better. In some states a quarter of homes already have rooftop solar systems and current installed prices range from $2 to $1 per watt (and lower for really large home systems). After years of dropping steadily, on 1 July 2017 Victoria’s feed-in tariff increased again. Other states are already starting to follow suit, including many retailers in NSW that have recently doubled what they pay for solar exports, heralding a second solar boom.

Damien Moyse, ATA’s policy manager, says continuing technology cost reductions and increases to the wholesale price of electricity are driving new investment, and the trend now is towards much larger systems. “With feed-in tariffs going back up over 10 cents per kilowatt-hour and prices for electricity from the grid jumping by around 20 per cent in the past six months, the economic value of solar PV is now less sensitive to how much solar electricity is exported to the grid,” he says. “We are finding three and four year payback times on 10kW residential systems, providing tens of thousands of dollars worth of value over their lifetimes.”

To mark their 21 years with solar energy and the rooftop revolution they helped get started, Stuart and Wendy are having a celebration, of sorts. For the first time in years, they are opening to the public for Sustainable House Day 2017, on Sunday 17 September.

The house has never been fully renovated but Wendy and Stuart have continued to update appliances, lighting and other fittings as new technology has become available, in line with their values and commitment to energy efficiency. They’ve reinsulated, replaced the old windows with double glazing and installed an efficient reverse-cycle system for heating. Well before incandescent globes were phased out, they’d moved over to compact fluorescents, and now to LEDs.

ATA CEO Donna Luckman says what they have achieved demonstrates the cumulative benefit of small improvements, and reflects the journey of many ATA members. “You don’t need to build a new home or do a major renovation to have an impact. Wendy and Stuart are a great example of this and what we all can do by making incremental changes.”

The ATA used the experiences of solar pioneers like Wendy and Stuart to advocate to government, industry bodies and energy retailers to provide guidelines, codes and regulations to simplify the process of grid connection. “We’re now on the way to two million households in Australia with rooftop solar that will have benefitted from their experiences,” says Donna.

The personal has always been political for Stuart and Wendy. They haven’t let themselves be distracted by Australia’s dizzying number of energy policy changes and uncertainties that have held back climate action for years. The very same panels and inverter that were operating when the mandatory renewable energy target was introduced in 2001 are still going strong today as Professor Alan Finkel’s proposed clean energy target is debated. Thinking back, would they do anything differently?

“I would have liked to connect the house better to the back garden,” laughs Wendy. “But it’s been clear to us for a while now that if we move out of here this house and land will be bought by a developer and the house will be bulldozed, so it’s not worth over-capitalising in the house. But we still want to continue with making it a house that we love living in,” she says.

“Not everyone can do things for the long term and we couldn’t have predicted for sure we’d be here together after 25 years. But for us the whole journey’s been a really good example of how thinking and investing in the long term is generally beneficial and worthwhile.”