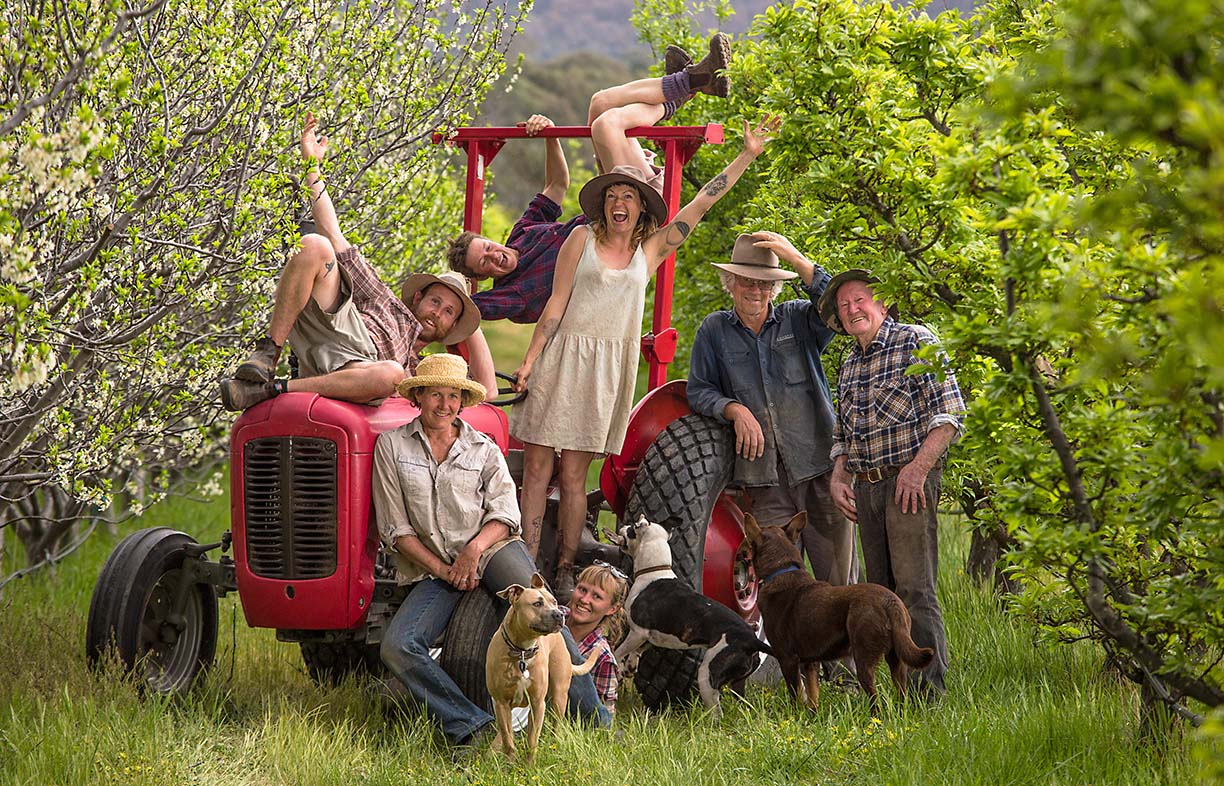 Ant of Tellurian Fruit Gardens and Mel and Sas of Gung Hoe Growers are part of the Harcourt Organic Farming Co-op, a group of farmers who lease land on a single farm. Community-supported agriculture is a core part of the co-op’s model for sustainable food production. Image: Oliver Holmgren

People subscribe to magazines and newspapers, so why not food? With community-supported agriculture, you can do just that. This model of food production and distribution connects farmers and eaters, supports local and small-scale enterprises and offers financial, social and environmental benefits, and it’s gaining ground around the country.

Community-supported agriculture (CSA) as we know it today was born out of Japan’s teikei system, dating to the 1970s, in which consumers purchase directly from farmers. It’s a model based on relationships, not just transactions: the details differ according to the scheme, but the fundamental idea is that people purchase shares in a farm’s projected harvest in advance and for a set period (a season, or a year) and receive regular food deliveries. In this way, the economic risk is shared between farmer and shareholders, who in return for their upfront investment receive fresh, seasonal produce and the ability to be more involved in where their food is coming from.

Duang Tengtrirat, who now calls Chewton in central Victoria home, was instrumental in setting up one of the first CSAs in the USA. In 1979, she was living in Seattle and working with Hmong, Mien and Lao refugees from the Vietnam War, many of whom were farmers. After receiving a grant, the refugee advocates leased a large plot of land and the refugees began to farm. “We hadn’t thought of what we were going to do with the produce,” Duang says. “We decided that we would start selling shares of the produce to people.” It worked. Locals bought shares and picked up a weekly box from Pike Place Market, a well-known Seattle institution. “We didn’t even have the term CSA in those days,” she recalls. 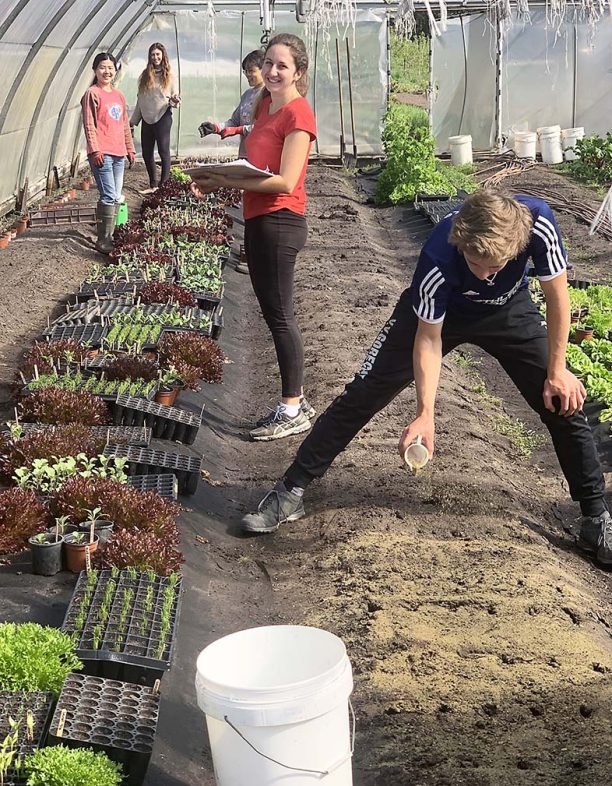 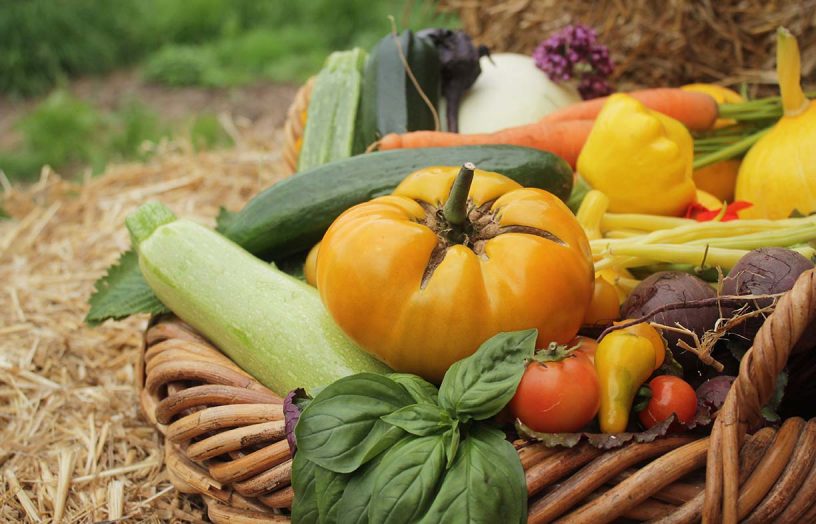 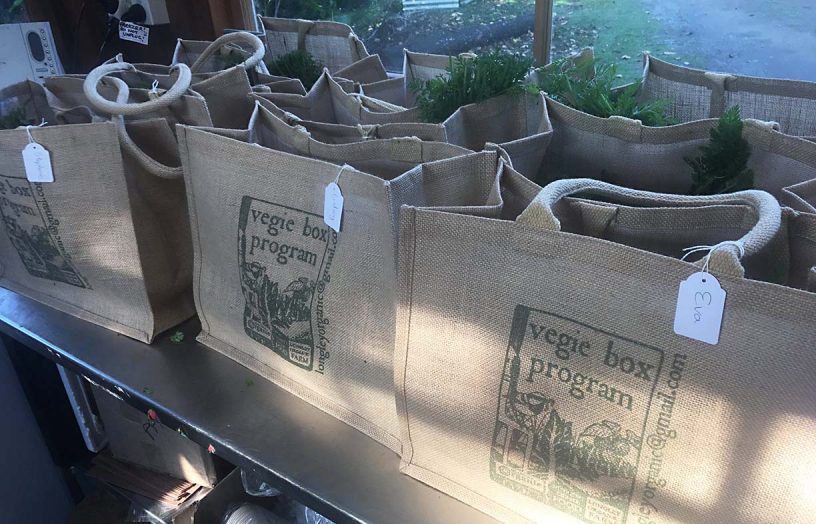 Duang travelled to the US last year and what she found was encouraging: “There are now 1300 CSAs in the Pacific Northwest alone!” And the model, popular in the US and Europe for decades, is now gaining traction across Australia, with examples in every state and territory. Depending on where you live, you can join a CSA for your vegetables, fruit, dairy, meat, eggs, flowers and even bread.

It is a busy picking day when I turn up to Gung Hoe Growers at Harcourt, near Castlemaine, north-west of Melbourne. Mel Willard and Sas Allardice have been farming here since 2015 and started a CSA scheme soon after. Last year, more than 50 shareholders received weekly boxes of organic vegetables and herbs.

Mel and Sas are driven by issues of food security; they want people to be able to access good food, even if they are on a low income, and they offer an option for people to volunteer on the farm as part payment for their vegetables. They are also proponents of local food. “Bendigo [32km] is the furthest our produce goes,” Sas says. “95 per cent goes straight to Castlemaine.” For Mel, it is about “food going straight to homes and meeting the people eating our food. Educating not in a top-down way but through genuine conversation.”

For many farmers, the ‘community-supported’ part of the model is a boon, as it offers financial security and an ability to plan ahead. Longley Organic Farm in Tasmania is based on the minimal-till biointensive market farming model of Quebecois farmer Jean M Fortier, an advocate for ecological, human-scale agriculture. Owner James Hutchinson says the practice is about “soil first”, and sequestering carbon to improve soil health in the long term. “This brings multiple benefits including soil microbial capacity, retention of nutrients, temperature buffering, water-holding capacity, and ultimately mitigating climate change as suggested in the Paris climate agreement,” he says. His CSA connects members with a more regenerative agricultural system and the guaranteed income he receives means that he can focus on his wider ecological goals. “Everything becomes a lot more manageable and it increases long-term economic viability.”

In the west, Roly Poly Farm started trading in the Perth hills a year ago. It was structured as a CSA scheme straight out of the gate because the farmers, Declan McGill and Melissa Charlick, had spent years working on farms around the world and had seen the benefits of the model up close. Declan says the advance payments from their CSA “allowed us to make infrastructure investments up front before the season began.”

Roly Poly Farm has social, health and ecological goals. Declan points out that the better supported small-scale farms are financially, the better protected their workers’ rights will be. Roly Poly Farms aims to employ full-time staff who are paid a living wage, annual leave, sick pay and superannuation. “They’re not just hired labour, they are skilled workers. People need to be able to look at agriculture as a legitimate career.” 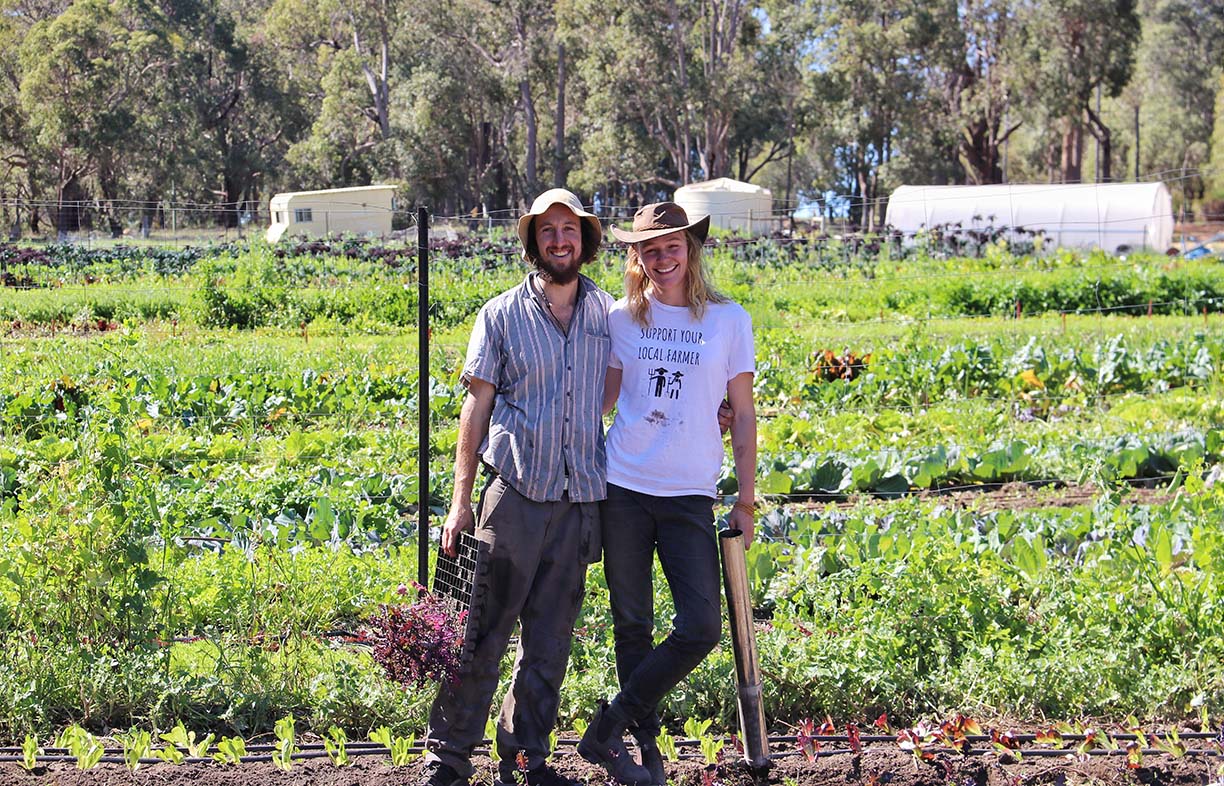 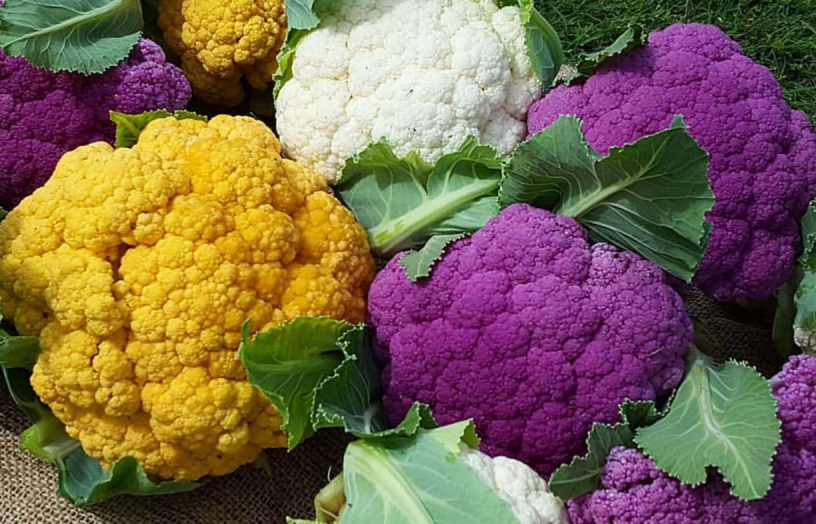 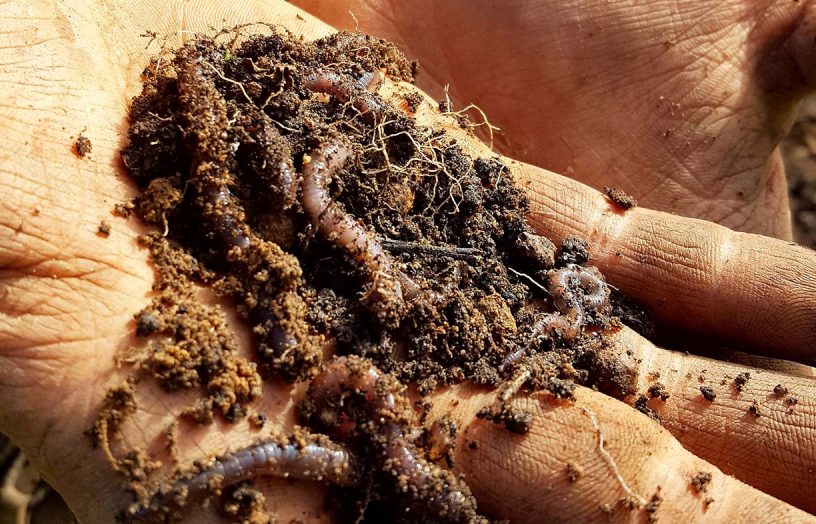 Declan McGill and Melissa Charlick run Roly Poly Farms in the Perth hills, which embraced the community-supported agriculture model from the beginning.

Ant Wilson runs Tellurian Fruit Gardens, a CSA enterprise in Victoria. What makes his setup interesting is the sliding scale for payment. Through his “solidarity economy”, shareholders who can afford to pay more can help people with less money to access the same food. “I did that because I’m trying to create opportunities for people on lower incomes to access healthy, nutritious food that is grown in sustainable ways.”

For people accustomed to the wide range and year-round availability of produce at the supermarket, participating in community-supported agriculture can take some getting used to. Michael Pollan, a food politics author, writes that the CSA is “less like shopping for food than going out in the garden to see what’s ripe.” The contents of the regular boxes fluctuates depending on what is in season, and at the start of a growing season they tend to contain less produce than later on when the boxes are overflowing.

These days, Duang is a shareholder in Gung Hoe Growers and Tellurian Fruit Gardens and is on the waiting list for the Sellar Farmhouse Dairy CSA. She sees CSA membership as fundamentally about supporting the farmer: “You actually share the risk with the farmer. If I become a member and pay $400 up front, I don’t ever want that $400 back even if a bushfire came through and the farm is burned down, because I feel that my contribution to the farmer is in order for them to stand on their own two feet.” 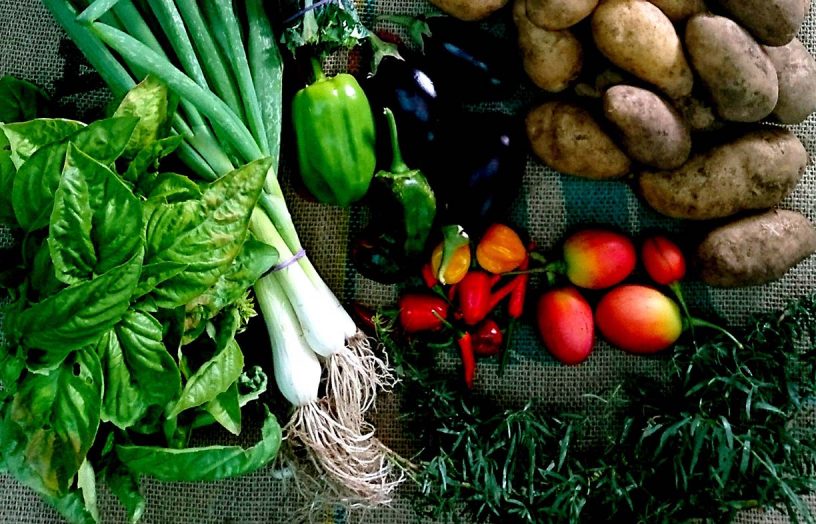 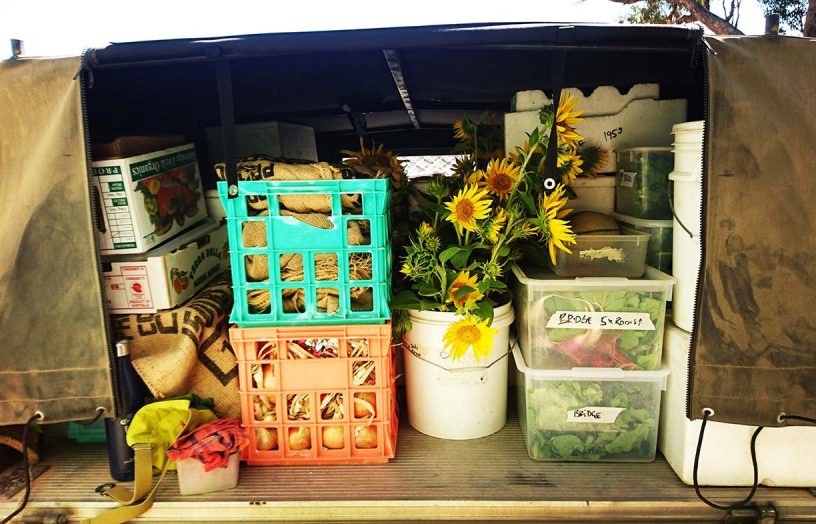 Gung Hoe Growers’ farm ute all loaded up to head into Castlemaine for restaurant deliveries and the weekly pickup of CSA boxes; the contents of the boxes varies through the growing season. Images: Melissa Willard

In this way, the model can play an important role in the expansion of small-scale sustainable agriculture, helping free the farmer from the vagaries of the free market and the downward pressure placed on produce prices by Australia’s supermarket behemoths. It also helps foster the ecological benefits of this kind of food-producing enterprise, including soil improvement, less chemical use, increased crop diversity, less food waste and decreased food miles to name a few.

Airlie Morris from Ingliston, between Melbourne and Ballarat, subscribes to Tellurian Fruit Gardens and Angelica Organic Farm and is on the waiting list for Jonai Farm. “Initially it was the lure of buying direct from the farmer. CSA is a great way to buy healthy, organic food,” she explains. But Airlie’s reasons for being a CSA subscriber have broadened over time. She uses CSA to teach her children about alternatives to shopping at the supermarket and about having respect for food. “We take the kids to CSA open days. They meet the farmers and see exactly where their food is coming from. They are truly thrilled when they see carrots and potatoes unearthed.” Airlie is also enamoured by the CSA community. “I love knowing the farmer who is producing the food we consume. It’s great going to those farm days and meeting the community of wholefood eaters. We talk passionately about the produce and share recipe ideas.”

Duang is optimistic about the possibilities of community-supported agriculture in Australia: “I feel that the people here are similar to the people that I worked with in Seattle all those years ago. They are community-minded.” To find a scheme near you and get involved, a good place to start is the CSA Network Australia and New Zealand website (csanetworkausnz.org).