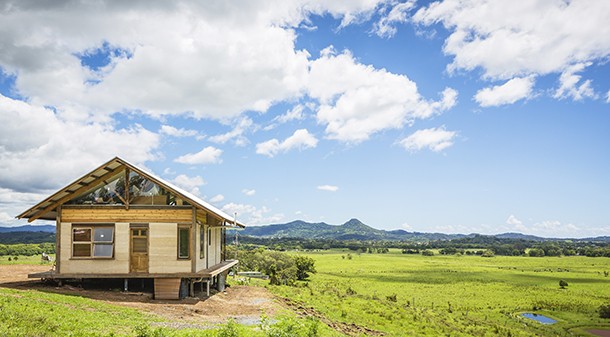 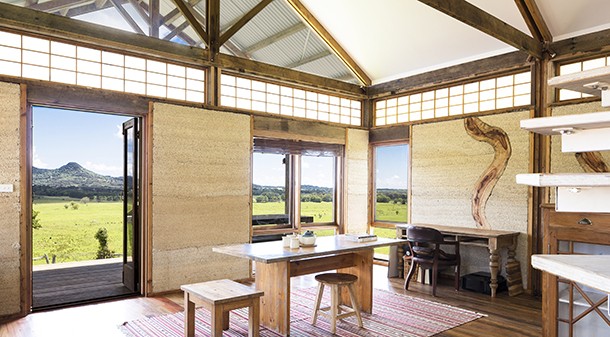 The home's walls are of hempcrete inset with a whimsical tree trunk detail, and Japanese-inspired translucent shutters at the top let light flood in. Care was taken to make sure all materials and finishes were as natural as possible. 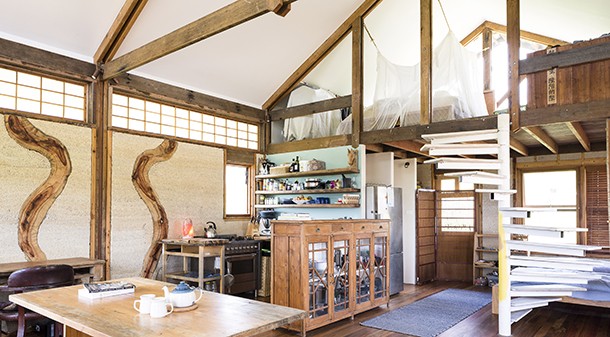 With the exception of the bathroom tucked under the mezzanine, the cottage's ground floor is one big open space containing a kitchen, living area with study spot, and a sleeping space for the kids behind the stairs. NB: This photograph was taken before the banister was installed!
< 1 / 3 >

Since losing her father to mesothelioma (a cancer caused through exposure to asbestos) Tiffany Gee has been passionate about healthy living environments. And when the opportunity arose to build a studio-house in rural New South Wales, she was determined to select building materials that would be safe for her growing family. “Sustainability was right up there but health was primary,” said Michael Leung, architect and Tiffany’s husband. “She was absolutely adamant we were not putting any toxic materials in.”

The studio was to be no steel shed; instead they had a modest but characterful design in mind, which attracted an incredibly passionate team. “Michael had his own ideas but was very open to suggestions. He wanted to bring out the best in everyone.”

Friend Luke Wrencher had suggested hempcrete construction, which appealed to them aesthetically and ticked all of Tiffany’s boxes: it’s a product that is sourced locally from the Hunter Valley, is rendered with non-toxic lime and clay, and has excellent thermal insulating properties. “Tiffany really strongly wanted the healthy building, carpenter Ture Schmidt was really strong on chunky recycled hardwood construction, Luke brought creative magic with the hemp, I was drawing and holding the project together and we were all collaborating on the details,” explains Michael. The project, which took three months to design and build, was so fulfilling that the team subsequently established a hemp design-build company, Balanced Earth.

The beautifully crafted studio hovers above the ground on a timber platform (elevated to reduce mould) which extends beyond the walls as a perimeter deck. The structure uses recycled hardwood post-and-beam frames with infill panels of 200mm-thick hempcrete. The translucent awning shutters at the tops of the walls are a Japanese reference which provide light from above whilst preserving wall space for the building’s future as an art studio. Broad eaves above protect the hemp walls from driving rain, important for this type of build.

The hemp panels took only two weeks to build, “a communal effort with everyone putting their love and energy into the house,” said Ture. The family did a lot of the rendering themselves – lime render externally and clay inside – with friends joining in the fun. Even the children rendered the walls to their sleeping nook themselves. The 200mm-thick walls have breathable, natural renders and act as thermal mass; the heat lag of 21 hours is an attractive feature of hemp construction. “The hemp has been brilliant on this westerly wall. It’s hot on the outside and the inside is still cool,” said Tiffany.

At 60 square metres, the cottage is cosy for four but the family has adapted happily to living in close quarters with less stuff and are in no rush to upgrade. “We were only going to be in here for six months and we’ve been here nearly two years,” said Tiffany. “This size of house is great up to the kids being 8 or 9 years because they want to be in your space. As a family home, it’s really sweet to live all together. The issue is if you have hobbies. There’s no space for hobbies.”

The small building is brimming with beautiful, natural details, many of which Michael and Tiffany will transpose into their main house, and after their time in the cottage they are questioning if they really want four times as much house, as originally intended. “I think the Tiny House movement is really powerful,” says Michael. “It starts to strip down to what is important.”