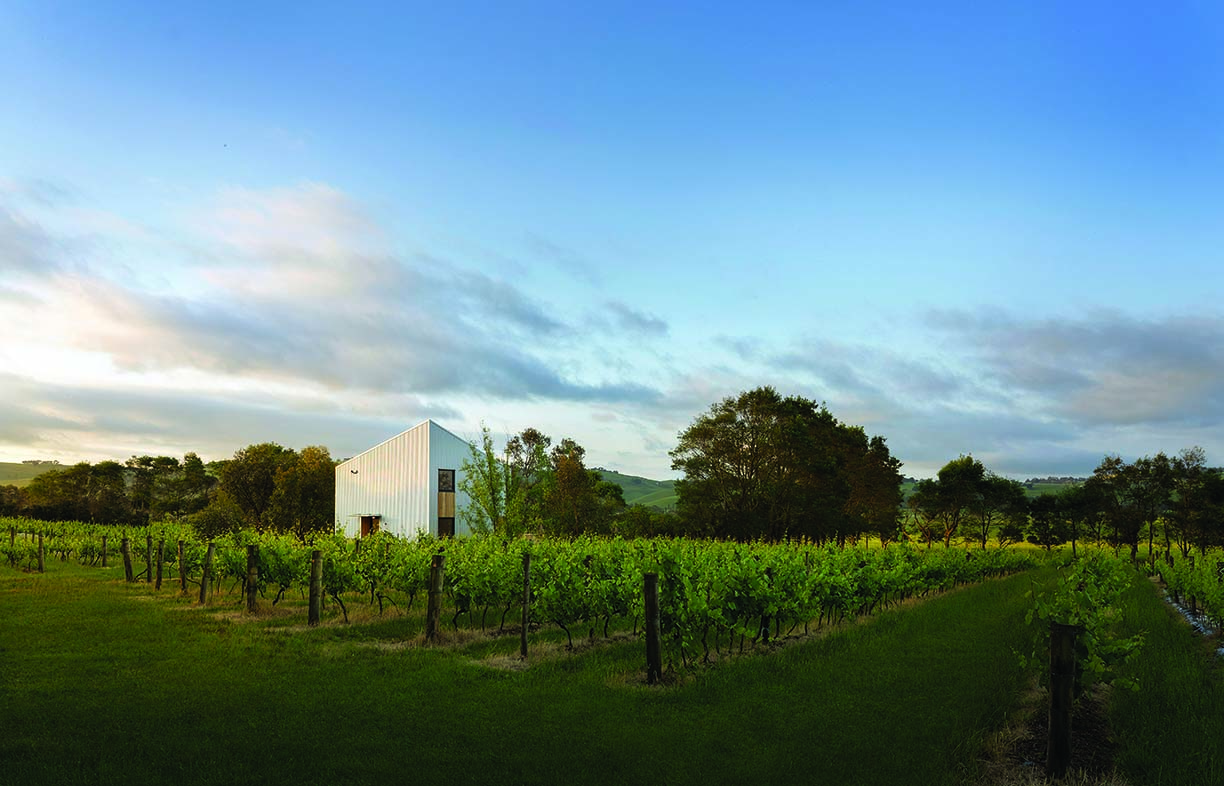 The house is named Issan, after a region of Thailand. Viyada grew up in Thailand, as did the wife of the couple's winemaking partner. The wine made from the grapes grown here is known as Issan Vineyard wine.

When Eddy and Viyada Tirtaatmadja retired, they took advantage of their newfound freedom by spending more time at their vineyard, a ten-acre plot of land planted with pinot noir and chardonnay amid Gippsland’s gorgeous rolling hills. They found that after a long day working outdoors the last thing they wanted to do was drive two hours back to their home in Melbourne’s suburbs, so they decided to build some modest accommodation on site.

The couple began looking at kit homes, but nothing they found sparked their interest. They wanted a simple place to stay, built with a minimal environmental impact and at a reasonable cost – a tough ask in a regional location. When they were introduced to Maxa Design, they found the team’s practical sustainable focus was a perfect fit to help create their studio. The couple’s budget for the house was below what Sven Maxa usually works with, but he was intrigued by the idea of building a small, sustainable off-grid home in such a striking location. 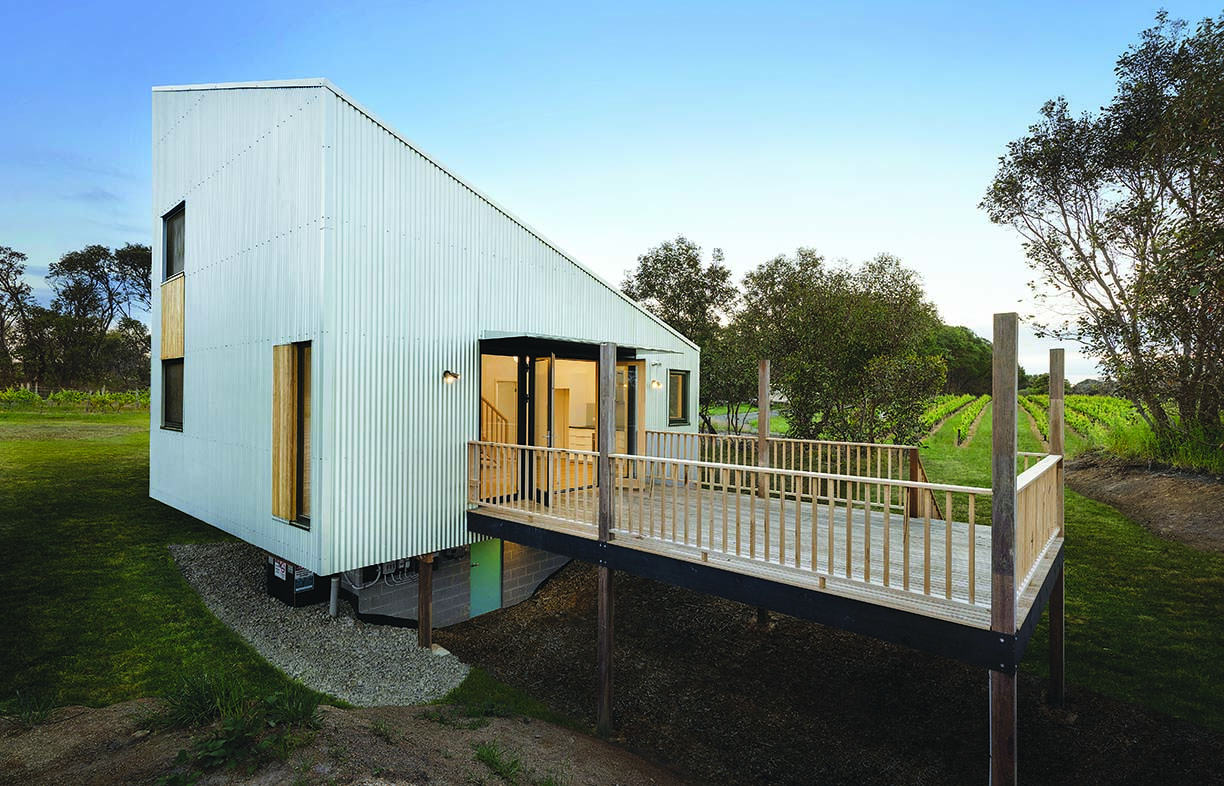 Meeting Passive House standards with such a small home was challenging. "There’s more focus on the membranes and the taping because there’s more of it [compared to the internal volume]. To get a small house over the line is a real achievement,” Sven says.

Sven and the owners decided the best place for the house was on top of an old dam, a perch that overlooks the rest of the site. The dam had been dry since Eddy and Viyada bought the property. “Interestingly, once construction started, the dam filled with water. We were all a bit shocked,” Sven laughs. With some quick excavation, disaster was averted. The site dried out, and the water was directed elsewhere.

Sven presented the owners with a design for a minimalist, all-electric studio that would run entirely off a 4.5-kilowatt solar PV system with battery storage. He also proposed something the couple hadn’t considered: building the studio to achieve Passive House certification.

“I said that looks complicated and expensive,” Eddy remembers over a cup of tea on the studio’s completed deck. “But the concept looked very good.” 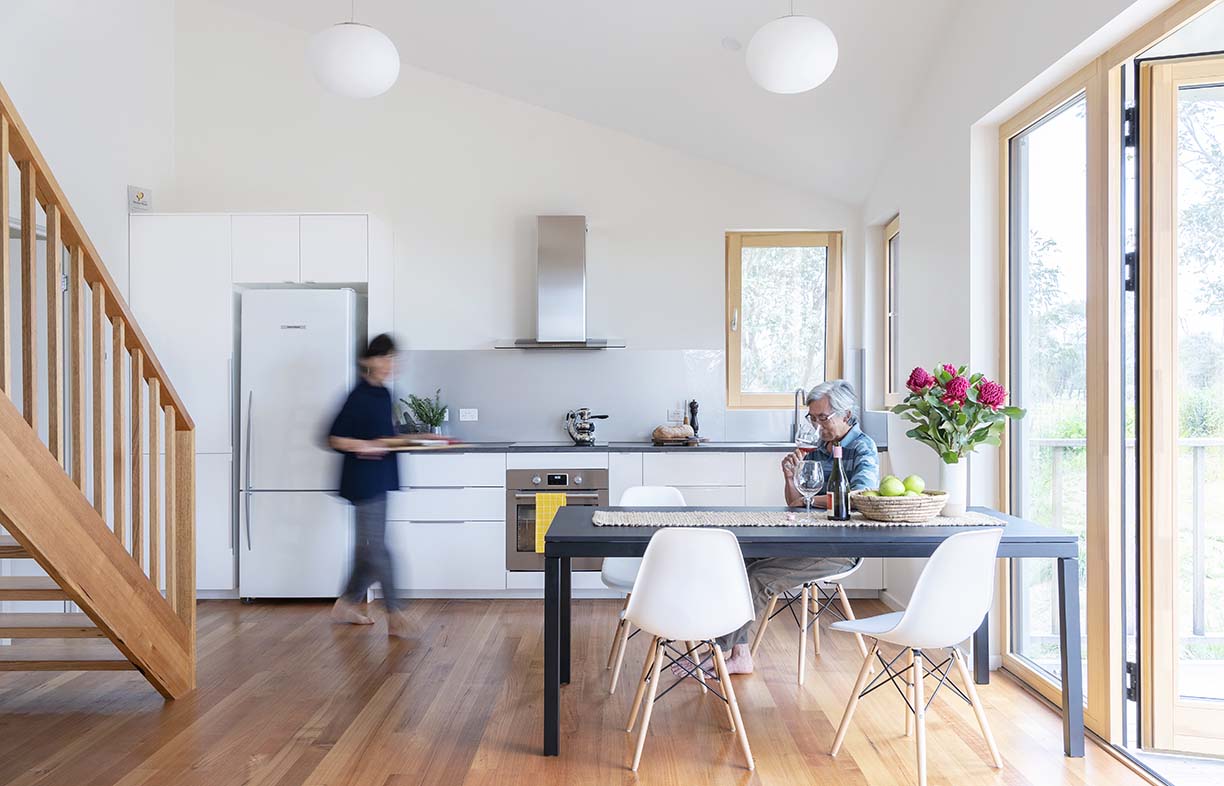 High-performance triple-glazed windows and doors contribute to the well-sealed building envelope. The couple did pare back some of Maxa Design's suggestions to save on costs, including replacing a proposed glass stair balustrade with timber.

The couple decided they’d try for Passive House certification, but would be happy with the resulting improvements to the house even if it didn’t quite qualify. Though the builder had limited experience with Passive House construction, the completed house ended up making the cut with ‘PH Plus’ certification, including an airtightness result of an impressively low 0.6 ACH (air changes per hour).

In an effort to maintain their minimalist approach and save on costs, Viyada and Eddy pared back several of Sven’s suggestions. For example, they eliminated some planned retaining walls, and replaced a proposed glass balustrade on the stairs with timber, reducing the need for cleaning and maintenance. “We come here to work in the vineyard, we don’t want more work in the house,” Eddy says.

The studio has four exterior walls and a mono-pitched roof that slopes up to a high point at the south-east corner, giving its otherwise basic design an element of novelty. “It’s simple in terms of concept: four walls and a roof. But it looks terrific,” says Eddy. When he’s working in the vineyard, he enjoys seeing the house look different from every angle. 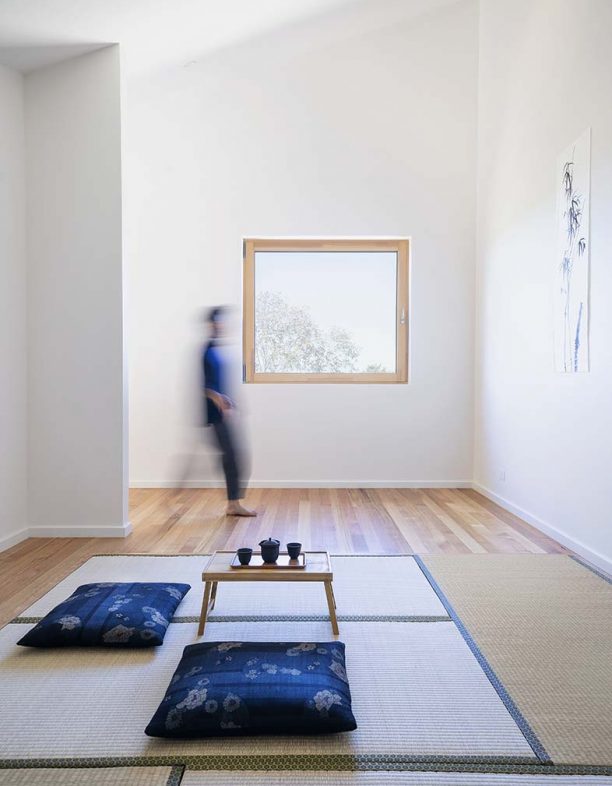 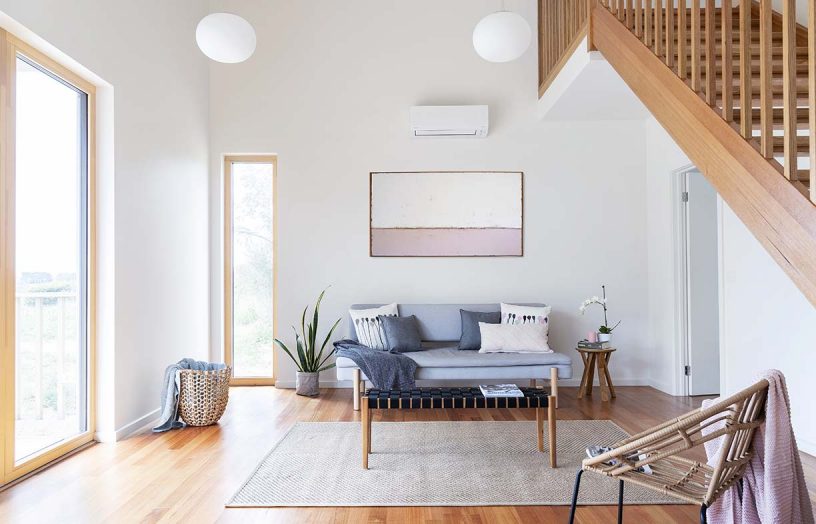 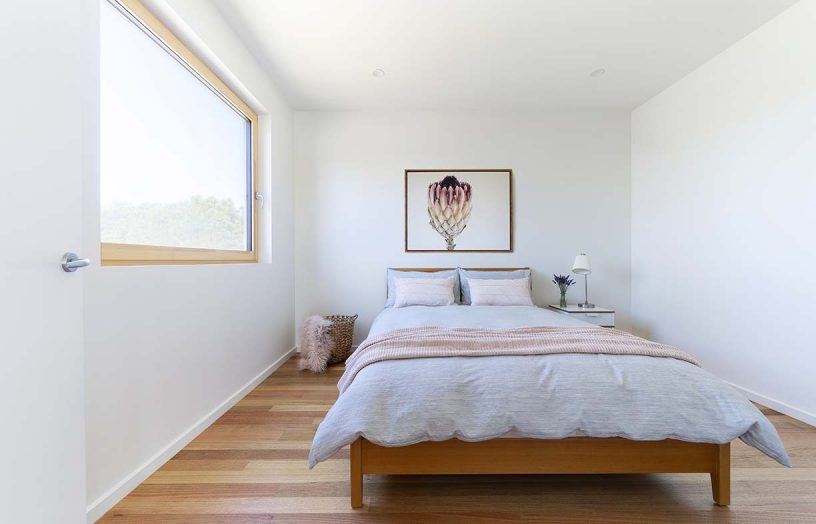 The small house features an open-plan kitchen and living space and a single bedroom downstairs, and a multi-purpose loft room floored partly with Japanese tatami mats. There is also a large storage space and plant room upstairs.

Behind the house, a generous deck overlooks the vines. French doors open into the timber-floored living space and kitchen, with a bedroom and bathroom tucked beyond, peacefully removed from the rest of the home.

In the living space, a staircase ascends to a loft outfitted with tatami mats in the style of a traditional Japanese room. The loft can sleep friends and family or serve as another space to relax. There’s a generous separate storage space in the loft as well, with plenty of room for extra mattresses or a visitor’s belongings.

Below the house is a wine cellar that will eventually be accessible by outdoor stairs and surrounded by retaining walls.

For its compact 100-square-metre area (including the cellar) the house feels impressively spacious. The high ceilings and north-oriented windows give it an airy quality. “When Sven showed us the plan, I couldn’t imagine it feeling this big,” Eddy marvels. 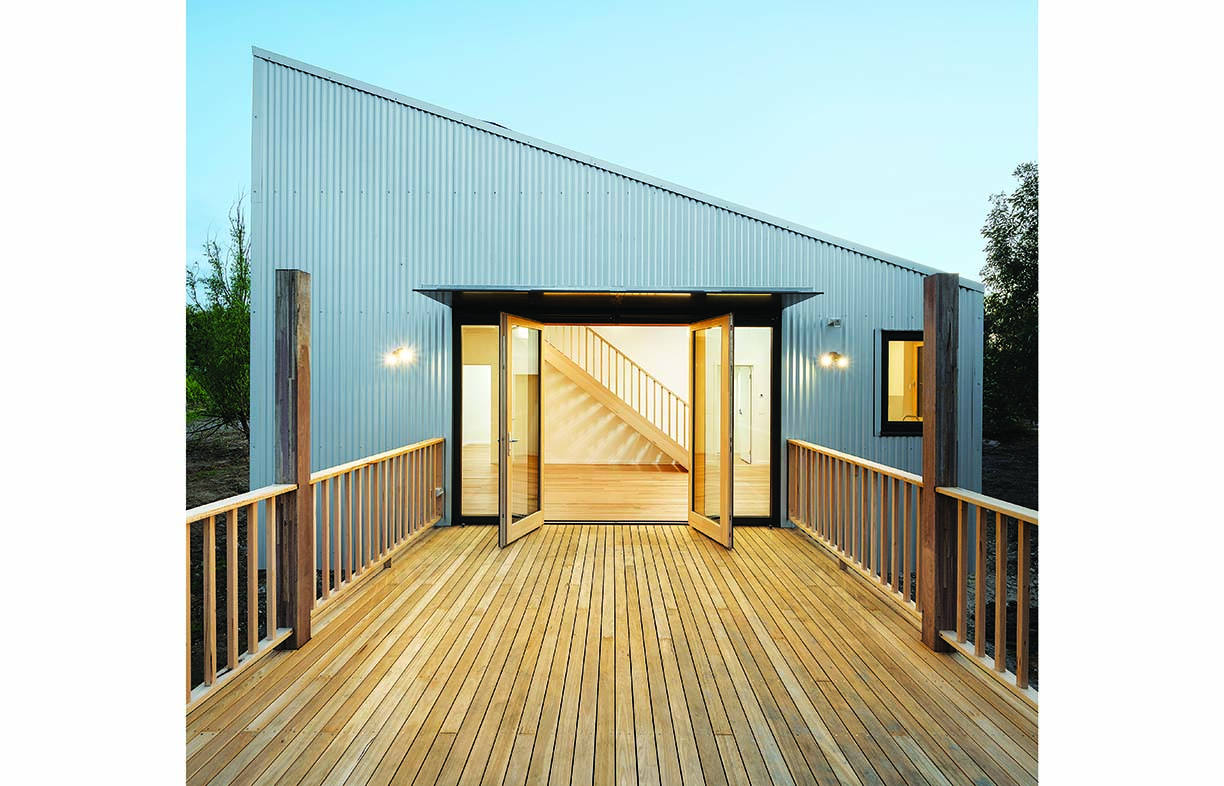 To keep the home’s electricity needs from surpassing the PV system’s energy output, Sven and his team had to get creative and Eddy and Viyada had to accept some compromises. The kitchen includes a refrigerator, induction cooktop and oven—and that’s it. There is no microwave or dishwasher, and the couple use a hand grinder to grind the beans for their coffee. “It’s just a matter of learning to do things slightly differently,” Viyada says.

A year after its completion, the house looks like it’s been there forever. With its corrugated iron cladding, the studio blends in nicely in a landscape dotted with farm sheds, beautifully reflecting the changing light throughout the day.

The couple are glad they went for the Passive House design. They luxuriate in the studio’s comfortable indoor temperature compared to their draughty Melbourne home and they don’t mind the minimalist amenities. In summer, they plan to spend more time here, hosting their children and grandchildren and visiting the nearby beaches.

“You start wondering, why would I ever need a bigger house?” Eddy laughs.