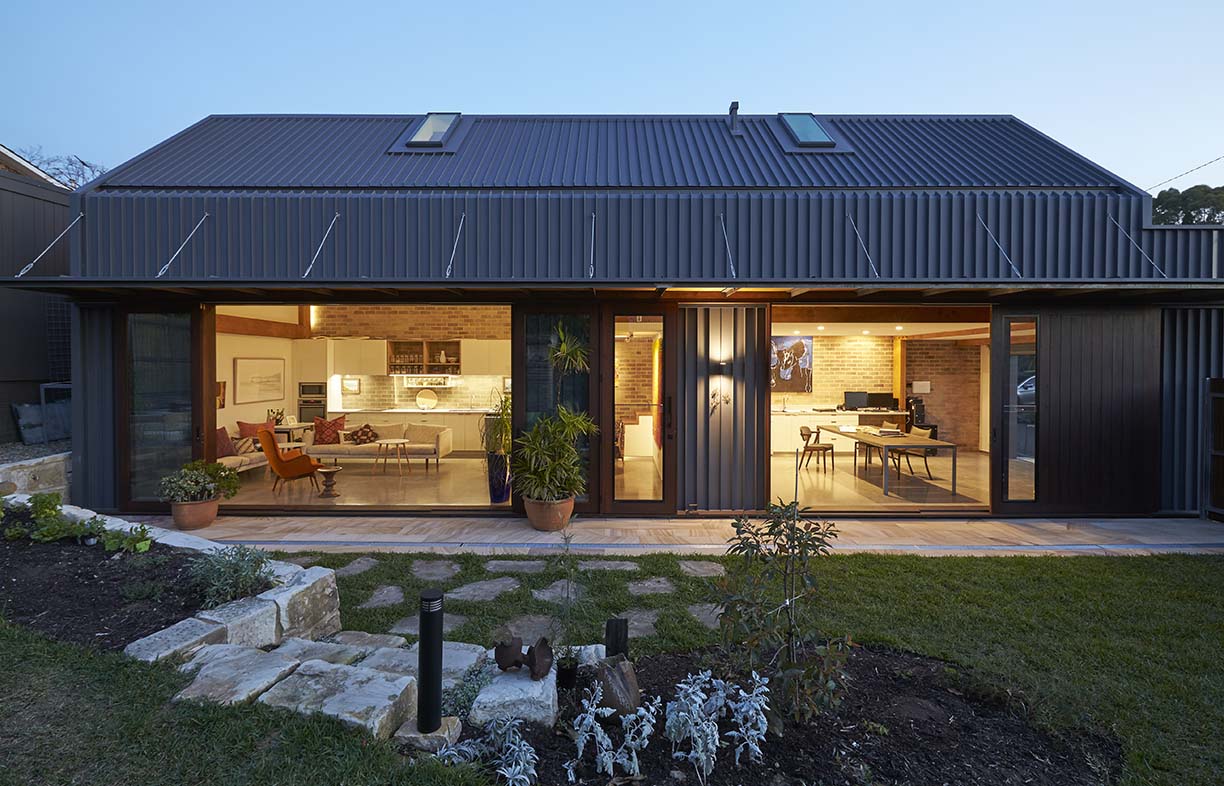 Expansive northern glazing, with fixed horizontal shading to keep the hot summer sun out, is a key part of the sustainable design of Louise Sullivan’s compact home in Naremburn, Sydney. At right, the garage takes up a third of the footprint and doubles as a home office.

Passive solar, 8.8 Stars and tucked neatly into the backyard in place of the original shed, this light-filled secondary dwelling on Sydney’s North Shore is an exemplar of sustainable downsizing.

It’s a fresh and sunny winter day when I visit interior designer Louise Sullivan at her home, The Shed, in Naremburn, Sydney. The large north-facing glass doors are wide open, and the afternoon sun reaches much of the way inside the narrow plan to heat the concrete slab floor. This northerly aspect is the key sustainability principle in the 8.8 Star energy-rated climate-resilient house.

Wishing to downsize, Louise engaged Anderson Architecture to create a secondary dwelling on the property of her family home. Louise’s initial plan was to transform a large existing shed into a studio-garage, but later learned a secondary dwelling was possible on the substantial inner-suburban block. “It was a far more viable proposition, and if I had the opportunity to start from scratch, then it was a no brainer to do it sensibly and sustainably,” she says. With the secondary dwelling approved, the project evolved into a long, slim building on the southern boundary with north-facing glazing opening the house up to the sunlight and garden. The old shed was not to be forgotten; its exposed hardwood beams and brick wall inspiring the material palette, LVL (laminated veneer lumber) portal frame and barn-like form. This is the first time Anderson Architecture used LVL for the structural portal frame and they will do so again.

Sixty square metres is the maximum footprint for a secondary dwelling, however it can be combined with other structures, and in this case, it’s a 30-square-metre garage. One side of the house comprises a kitchen, dining and living area. While compact, the six-metre-high pitched ceiling and upper level makes it feel much larger than it is. “It’s small in footprint but big in volume,” says Louise. In the other part of the house, the garage serves as a multipurpose space that also accommodates home office, laundry, powder room and storage under the stairs. The bedroom and bathroom are above the garage and dining area, utilising the pitch of the roof.

Several factors influenced the roof profile. The council envelope control stipulated the height limit and slope on the southern side so as not to overshadow the neighbour. Mirrored on the northern side, the 40-degree slope provided the ideal orientation for retrofitting solar panels in the future. “It is always a wrestle to open up a house to the north and produce a north-facing roof that is at the right angle for solar panels. They’re contradictory in some ways, because a lot of houses tilt the roof to bring light in,” Simon Anderson, director of Anderson Architecture, explains. Skylights are set into the roof: northern skylights bring in light, and operable southern skylights allow for cross ventilation.

“I think it’s a sign of good architecture when there are a lot of reasons for something to be the way it is,” Simon says. 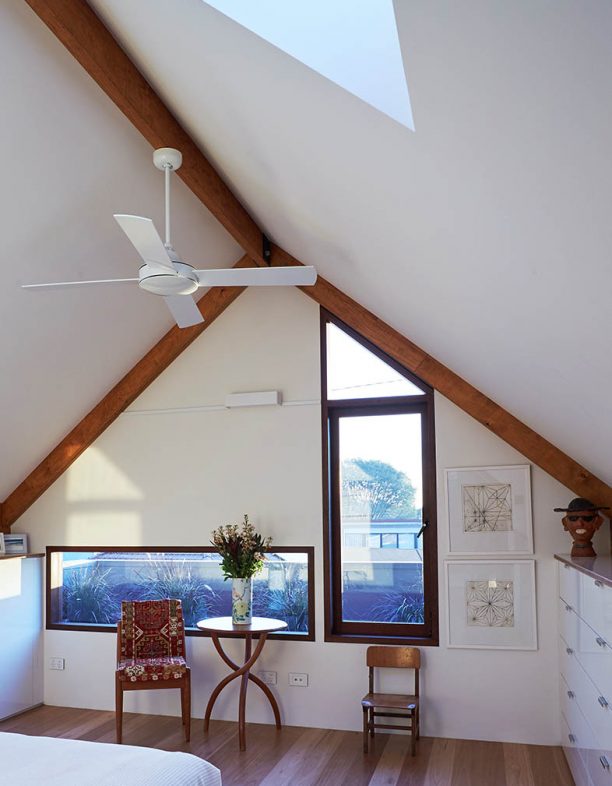 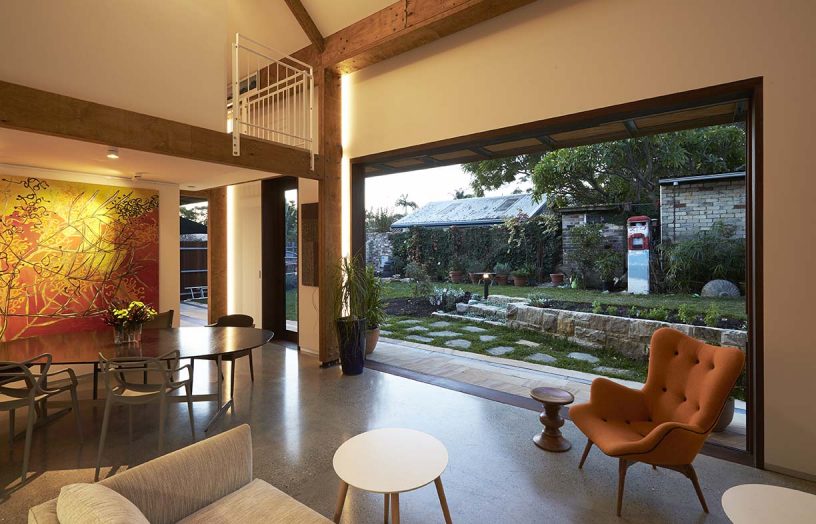 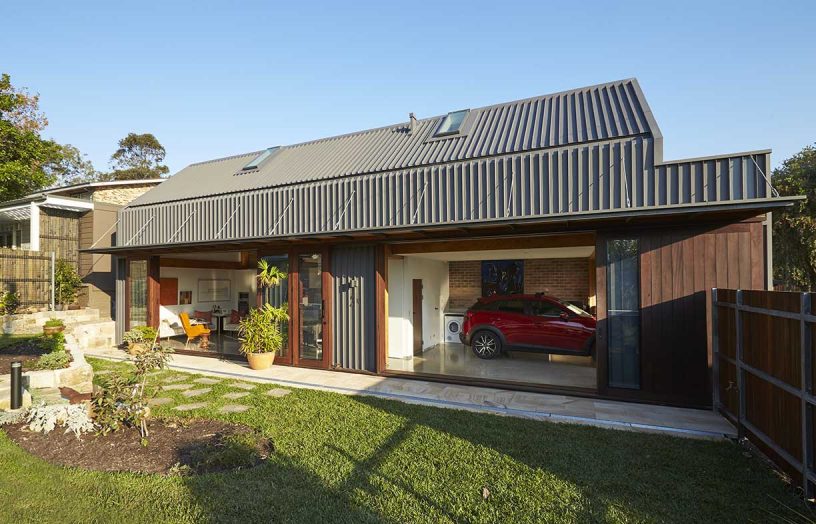 The northern pitch of the roof has been angled appropriately for a solar system, coming soon. The design makes space above the garage (at right) for the green roof. And for Louise, the sliding glazed doors opening to the garden are a central feature of the house, creating freedom and flow between indoors and out.

The north-facing wall has 2.7-metre-high sliding glass doors that open the house to the garden and create freedom and flow between indoors and out. “Which is how I want to live,” says Louise. “Most of the time I have the doors wide open.”

The insulated concrete-slab floor receives plenty of winter sun from this northerly aspect, storing the heat during the day and radiating it at night. The builder, Ole from More Than OK Building, meticulously measured and tested the depth of the 1.1-metre awning to block summer sun yet allow winter sun inside.

The insulated southern brick wall also provides thermal mass. The bricks are a nod to the former shed and the remaining outhouse buildings in the garden. “I have recycled a few things that were here because the building had an interesting history,” Louise says. This includes the timber powder-room door from the original shed.

The upstairs level is set in from the structural walls. The bathroom is light and spacious, and the bedroom looks out to a roof garden, which provides additional insulation and blocks the view of the laneway buildings.

Other passive solar design features include high insulation and double-glazed windows with film to reduce heat loss, and a 10,000-litre underground water tank connected to the toilet and washing machine.

Moving from a five-bedroom family house to a one-bedroom home required Louise to downsize but the result is a more sustainable and resilient approach for the environment, climate and life. “It’s very calming to live life more simply and sustainably. I have shed so many things,” says Louise.