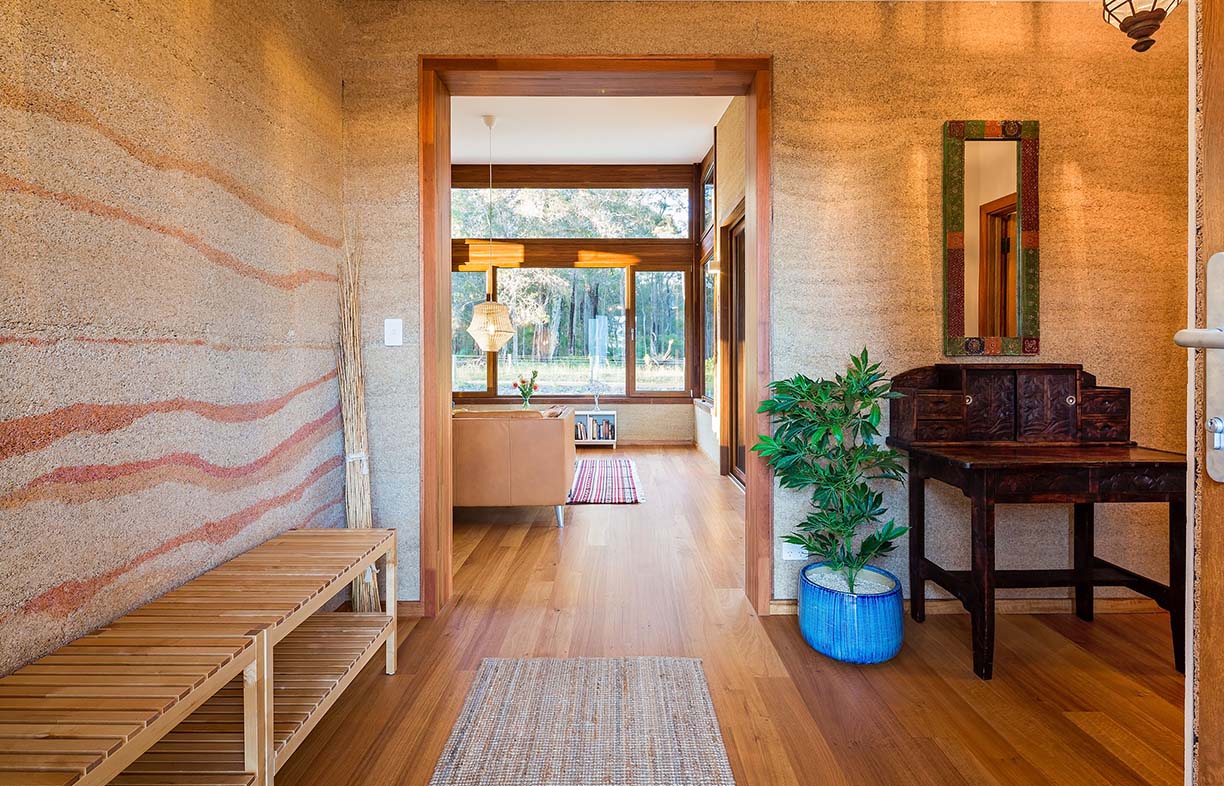 Holger and Andrea chose hempcrete for their retirement home, and couldn't be more pleased with the result.

Built with a focus on natural materials including hempcrete, this small home near Margaret River will provide a Perth couple with a comfortable, healthy, low-bills retirement.

They engaged a friend – James Shaw of Ecotect Architects – to design their new house. “We’ve known James for 25 years; our kids went to playgroup together,” Andrea says. “He’s super passionate about passive solar design and when we told him we’d bought the block, it turned out he’d already looked at the block next door, so he designed the house on a napkin.

“James said: ‘It needs to be small; to offer protection from the wind coming from the south-west and south; to have high windows to the north for winter sun, and you should consider windows to the south and west for breezeways’,” Andrea recalls. “Initially we wanted three bedrooms but we couldn’t afford that, so we built two bedrooms and two bathrooms, one of which has an integrated laundry.”

All of the major elements from James’s initial sketch were realised: the only big departure was the use of hempcrete, which was suggested by the couple’s adult daughter. She sang the praises of the termite- and vermin-resistant, breathable, renewable material, which also provides good thermal mass. 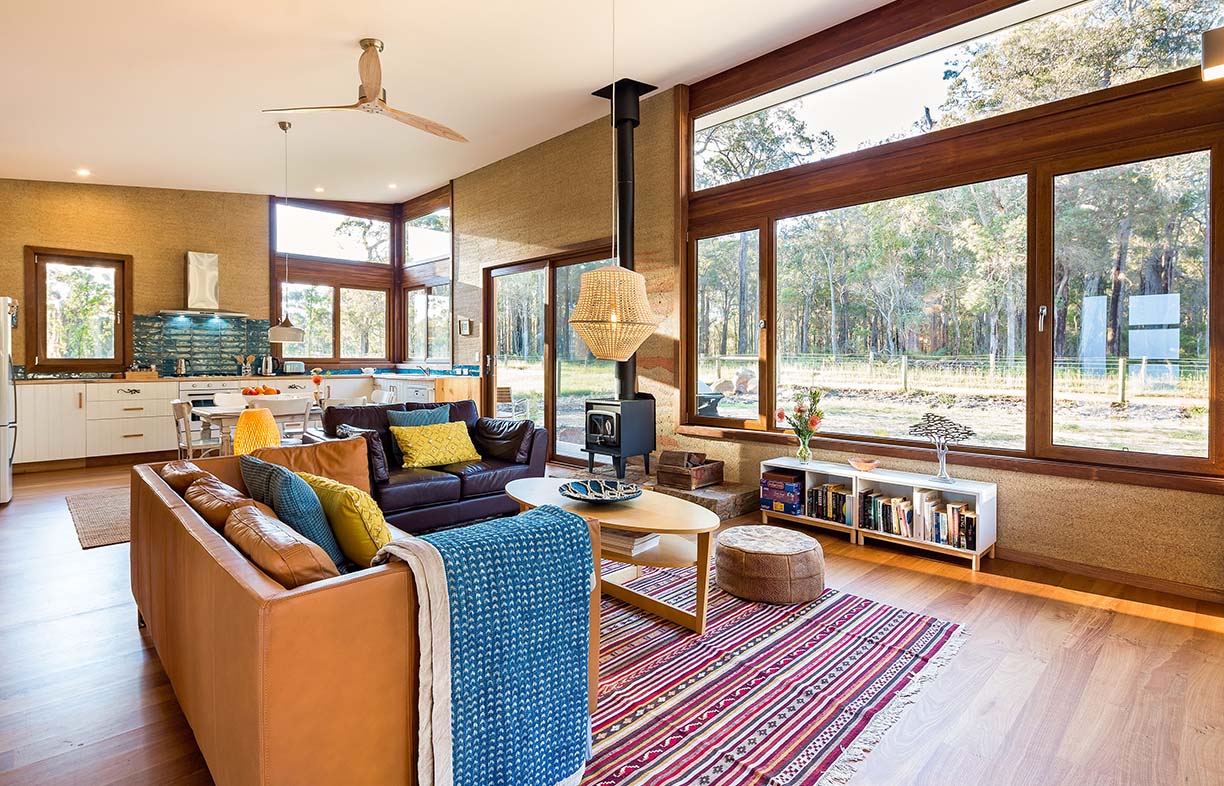 Modest in size, the house consists of just two bedrooms and a single open plan living space with views to the neighbouring bushland. Cross ventilation and ceiling fans provide the only cooling needed.

“We looked at the first hempcrete house being built at Margaret River, and Holger was worried that it wasn’t a proven technology and didn’t have official R-ratings; he’s an engineer and wanted to understand the numbers,” Andrea says. “But we visited that house during construction when it had a roof and walls but no windows. It was a wet and windy September day, and it was three or four degrees warmer inside than outside – and the scent from the hempcrete was beautiful.”

Further research via books and Irish hempcrete expert Steve Allin convinced them to proceed, and James adjusted the plans, having initially designed the house using strawbale and rammed earth. Andrea and Holger engaged local specialist Gary Rogers of Hemp Homes Australia to build their home, and he has recently completed two further projects in the region with plans to expand further afield.

Gary says that hempcrete offers many advantages, both for the builders who work with it and the people who live in the finished homes. “A few years ago, I took a good look at the whole building industry, which can be toxic in the way it treats employees and doesn’t tend to look after the environment. For me, working with hempcrete is a no-brainer, it’s that simple because it ticks all the boxes,” he says, noting that the material provides long-term benefits as hemp houses improve with age. 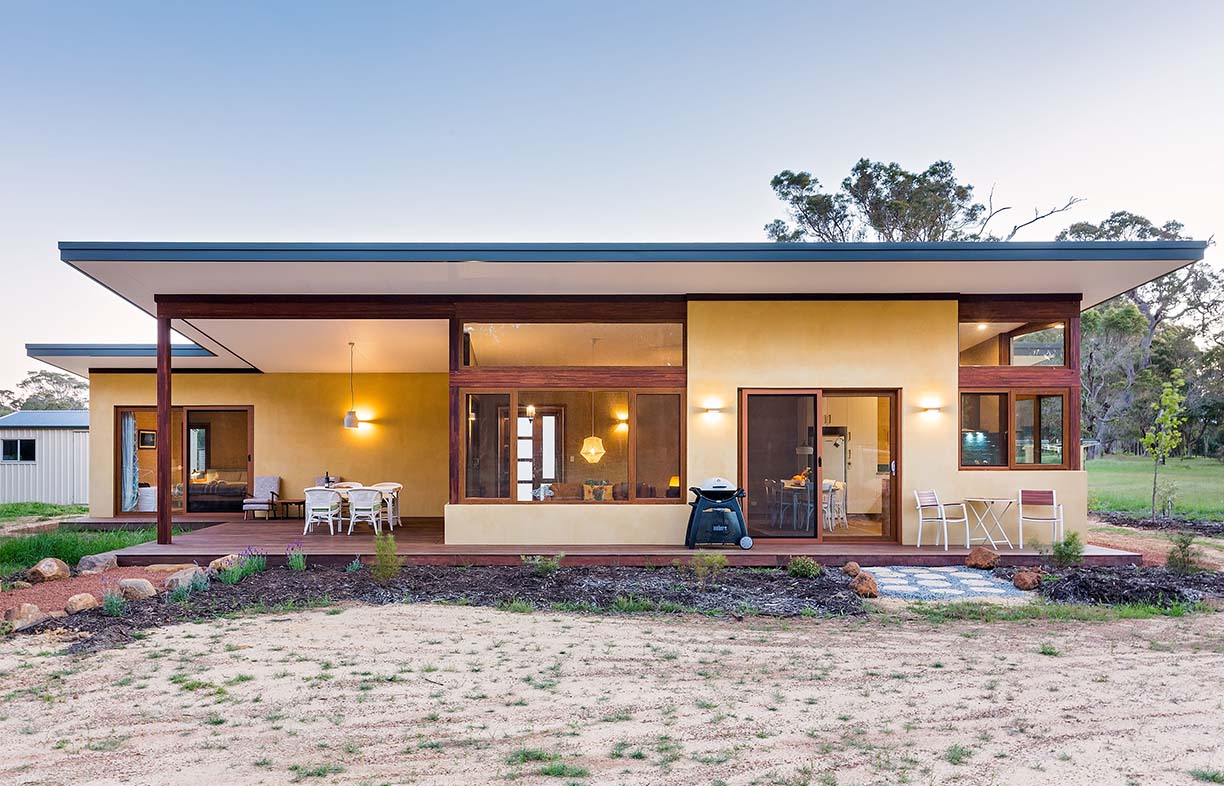 Andrea and Holger are enjoying watching their plantings mature. “We believe in a natural ecosystem, and therefore most of the plants in the garden (excluding the fruit orchard) mirror the bush on the other side of the fence," says Andrea. "We hope to attract and sustain the natural flora and fauna of the region.”

Along with making the move to hemp construction, he’s put in place other measures to reduce waste and prioritise natural products: “We are now taking just one skip bin of waste off our home sites; we’ve reduced the plastic wrapping around materials such as timber by using reuseable tarps instead, and we don’t use paint in any of our homes,” he explains. He also tends to use tadelakt render in bathrooms to avoid the need for tiles and grout, which can require harsh chemical cleaners to maintain.

James is another convert to hempcrete after seeing the successful completion of this house. “The great thing about hemp – and I’m totally sold on it after this project – is that a hempcrete building will not generate the mould that a sealed building does over time, because the product is breathable,” he says. “Artificial ventilation systems are not required, so you can keep the construction simple. The hemp is also fantastic for minimising reverberation, so it’s very peaceful and quiet inside.”

Even though hempcrete is not yet widely used in Australia – and is seen as experimental by some – this was an efficient and economical house to build, mainly thanks to Holger keeping tight reins on the budget.

“He produced a spreadsheet and priced up every item we would need, down to mortice locks, doors and hinges,” Andrea recalls. “We set a budget and the maximum cost of various items, and allowed $30,000 for variations, but in the end we had $20,000 left. We were really strict about what we spent, and the only items that were more expensive than the budget were light fittings.” 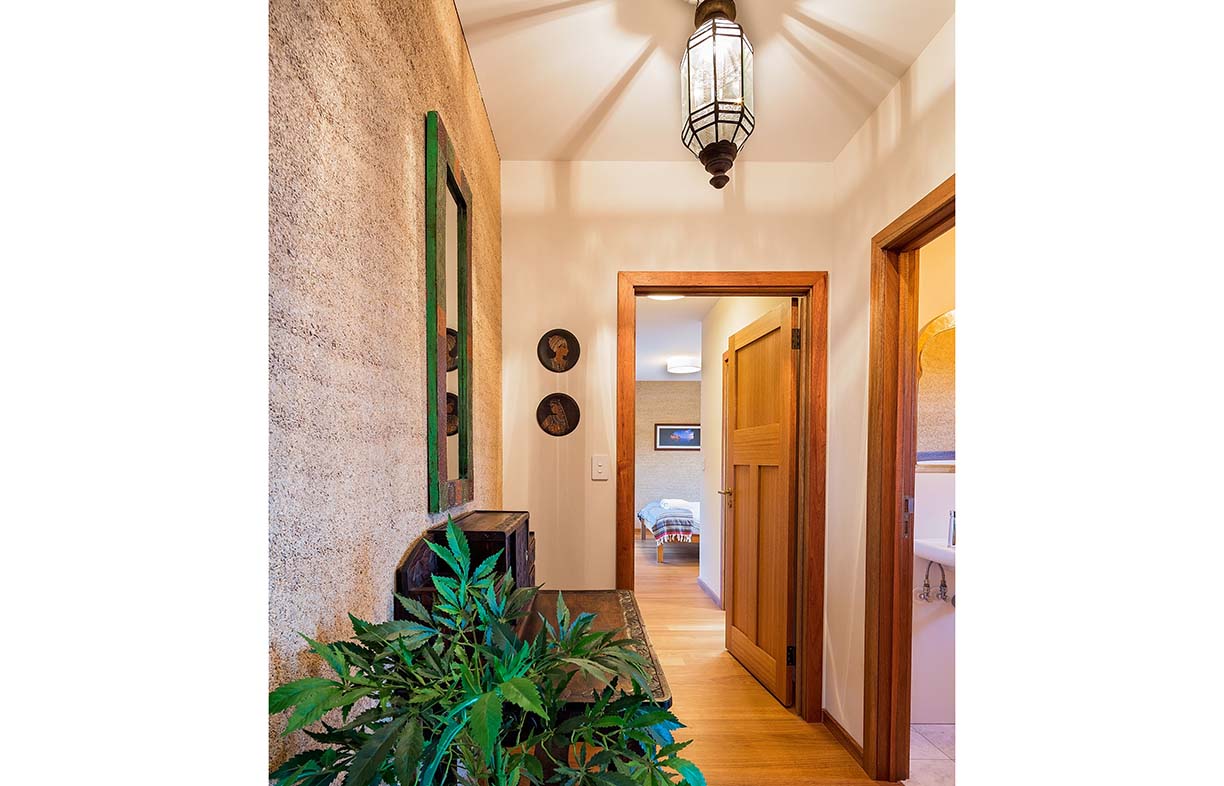 In keeping with the focus on healthy, natural materials, Osmo natural oils and waxes were used on the timber floor, internal doors, architraves and skirting boards.

The couple’s major splurge was the use of German double-glazed windows. “We used uPVC frames which are fitted into timber surrounds, because timber-framed windows were too expensive,” Andrea says.

She offers just one word of caution to others considering building with hempcrete. “You can’t chase a hempcrete wall open later, so you need to be very careful to plan and install sufficient light switches and power points.”

The couple will go off-grid for power when they retire and move into the house, building the carport that James has already designed with its north-facing roof for PV panels. They also prepared for ageing in place by incorporating universal design principles such as wider doors and hallways, and hobless showers. Andrea’s mum recently visited from Germany, and her wheelie-walker was easily accommodated. “She was the guinea pig for our vision around barrier-free design, and it really worked well,” says Andrea.

With retirement still a few years away, the couple rent out their house for holidays, which enables guests to experience the natural materials and passive solar qualities for themselves. They also opened for Sustainable House Day in 2019, and have welcomed a group developing a new eco-village in Witchcliffe. “We are more than happy to show it to anyone and everyone,” Andrea says.

“People come into the house and they are in awe,” she goes on. “The front faces south – so there are small windows in that wall and only modest street appeal – but when you come in you see the forest through the glazing, it’s beautiful.”

Andrea and Holger have planted 300 trees and bushes on their property, attracting more and varied birdlife, and they plan to move a beehive from their Perth home to the block. “I think the bees will make amazing honey from that forest,” Andrea says. 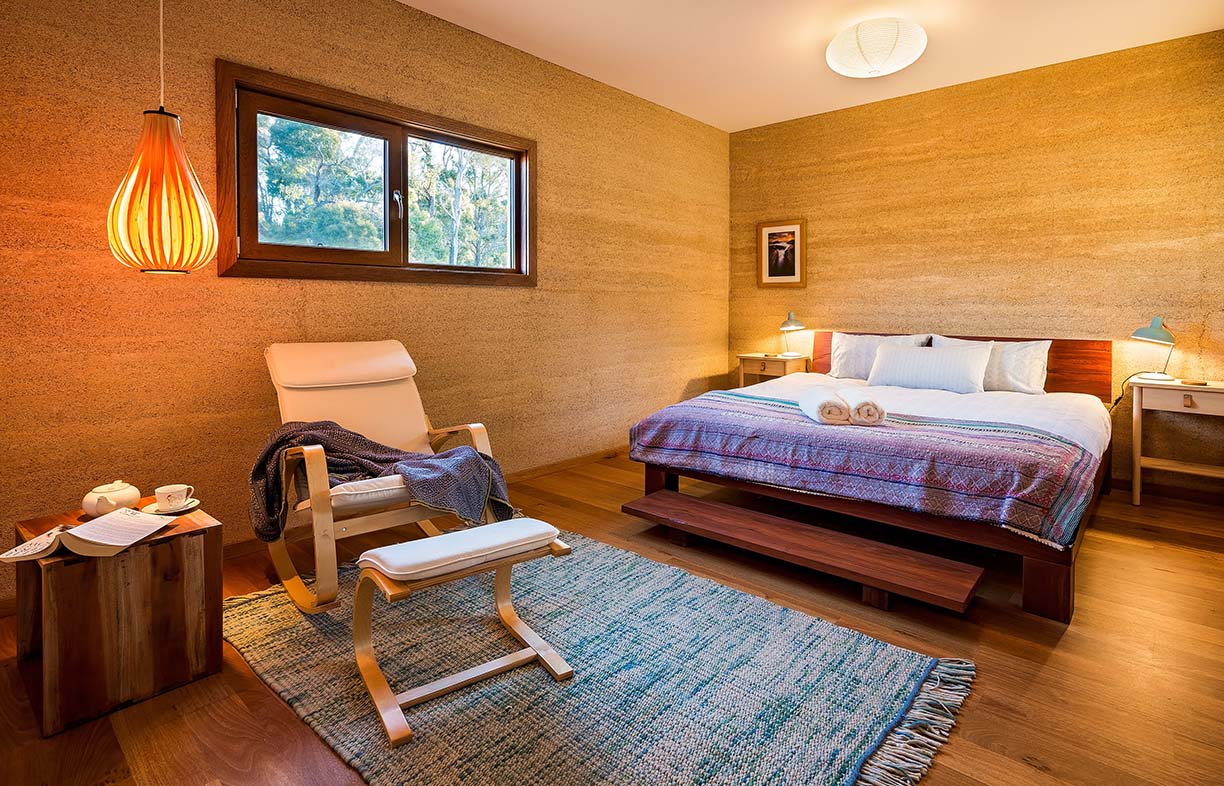 “If you spend just two nights in the house you feel like you have been on holidays, because we look out into the forest, you can’t see a neighbour,” she explains. “We wanted it to be as healthy as possible, and you can feel it in the house. It has a real sense of tranquillity and serenity.”

Having worked with hempcrete for many years, even Gary was pleasantly surprised when he visited Andrea and Holger’s completed home at handover. “It was like they’d been living there for 20 years: there were no VOCs, it didn’t have that ‘new house’ smell,” he says.

Since completing this project, Gary has acquired the machinery needed to process hemp crops for various purposes – building, medicinal and textiles – and intends to commence commercial production in 2020. He envisions a future when all homes are made of locally grown, renewable, healthy, breathable hempcrete.

“People are currently importing it to build homes in Perth, but that generates a higher lifecycle embodied energy cost, when we have the ideal growing conditions and lime deposits here in WA,” he says. “Hempcrete houses will be carbon negative, and I think people should be rewarded under a carbon pricing scheme for building this kind of house: that’s where I see the industry changing in future.”