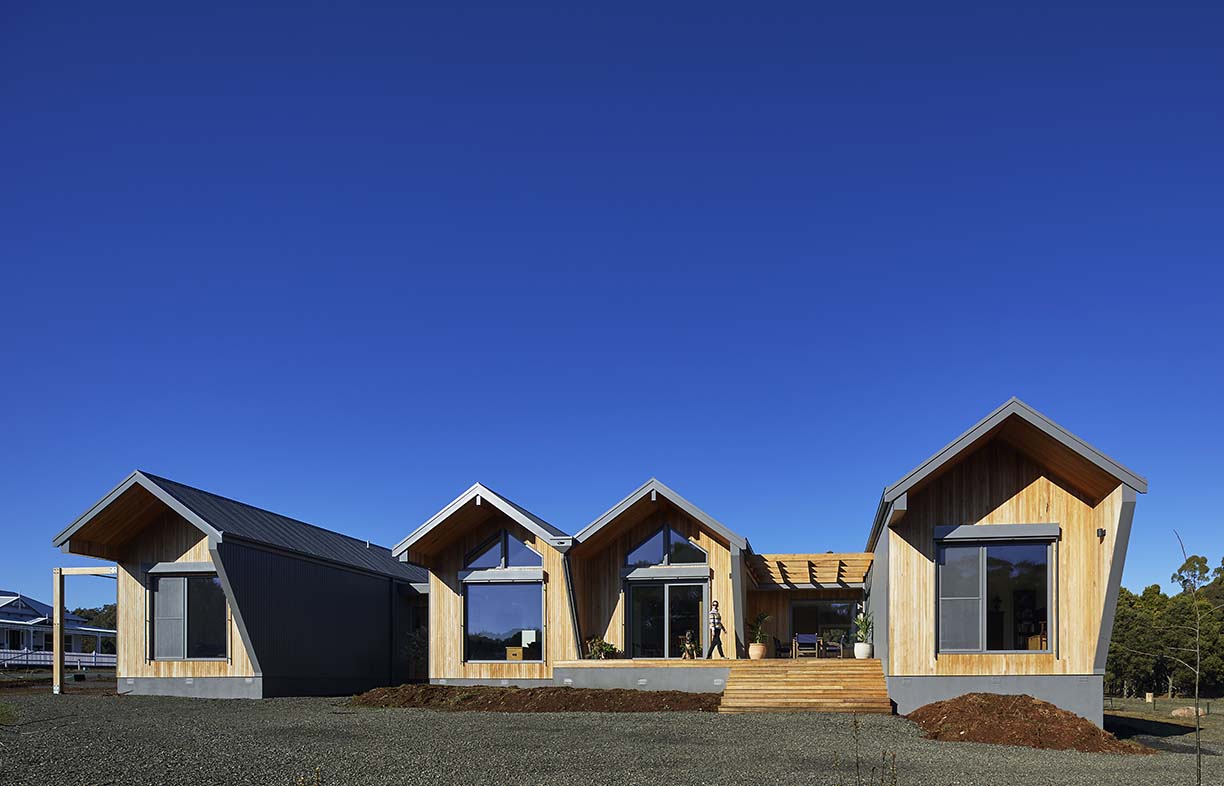 This treechange home in central Victoria didn’t start off as a Passive House project, but evolved into one through close collaboration between the owners, architect and builder.

David and Yvonne always planned to return to country living, having both grown up in small villages in the UK. After many years of living in Melbourne while putting their children through school, in 2017 they started looking outside the city for a place to settle, and decided on the peaceful village of Trentham, about 75 kilometres to the north-west.

They approached Ballarat-based architect Talina Edwards about a new sustainable build, and immediately felt excited by her passion. Together they found a suitable 2500-square-metre block with the right orientation. The brief was for a house that was “just enough” in terms of size, and also provided flexibility and privacy. The couple often have family and visitors staying, and David needed a separate office as he works from home. Maintaining privacy from neighbours was a priority, and they also wanted to take advantage of the views.

Talina created a 200-square-metre single-level home that “stretches into the landscape and really embraces the outdoors.” To reflect Yvonne and David’s rural upbringing, she designed it to feel “like an English village – a bunch of little houses rather than just one big house,” she says. Named Owl Woods, the house has a bedroom wing at each end, with the secondary bedrooms designed for flexible use. They are connected by light-filled passages to the compact central living space, which has vaulted ceilings and large windows overlooking the garden. David and Yvonne loved the design.

Talina initially integrated a range of sustainability features such as passive solar design, biophilic principles and use of local trades and materials. But it was their builder who suggested that a Passive House could meet the brief. Stuart Lee, from Craftsmen Quality Builders, is an expert in sustainable building and a certified Passive House tradesperson. However, he didn’t push the idea: Talina emphasises that Owl Woods evolved into a Certified Passive House (CPH) project through collaborative discussion. It achieved its official certification in December 2019, only the 10th standalone home to do so in Victoria, and the 20th in Australia. 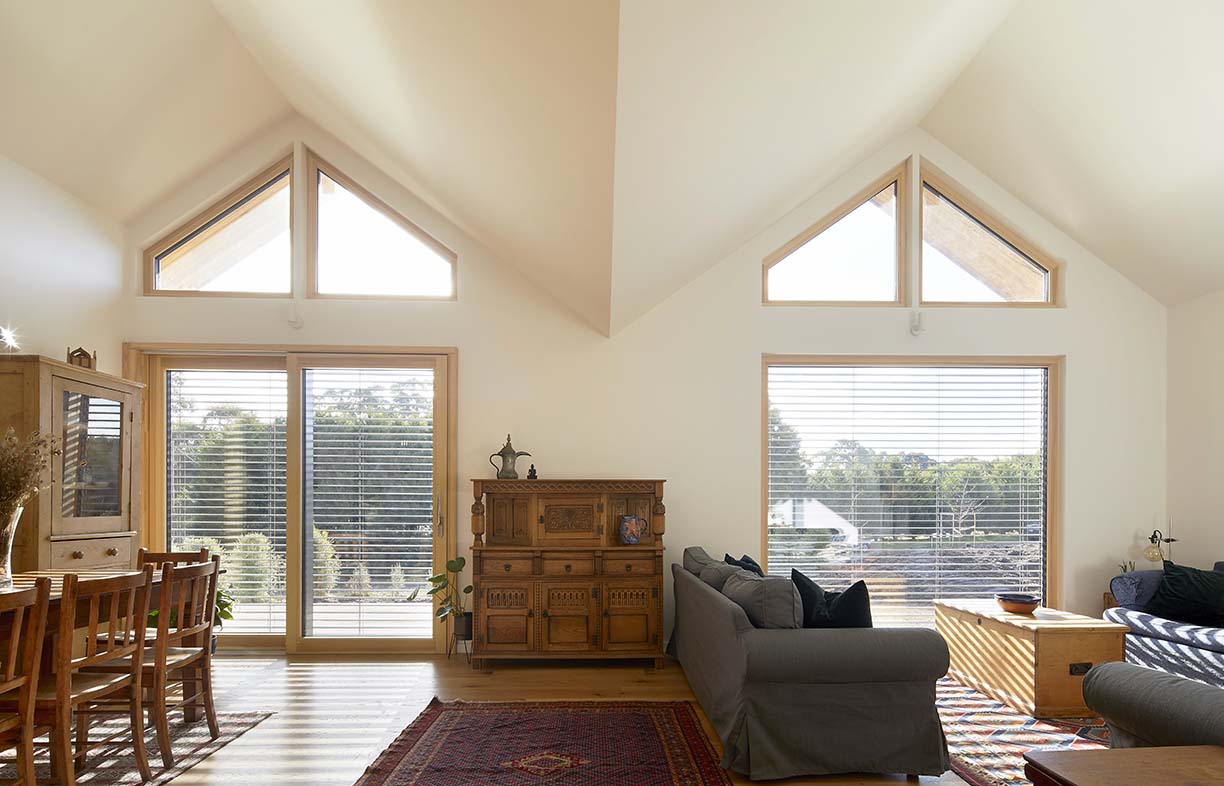 Architect Talina designed the house to resemble "a bunch of little houses rather than just one big house". It is orientated to allow winter solar gain, with fixed eaves and operable blinds to exclude summer sun.

“Usually a Passive House is designed that way from the beginning, so you try to have a compact box-shaped house, which is the easiest way to be thermally efficient and meet the certification requirements,” she says. However, while David and Yvonne liked the Passive House concept, they were emphatic that they wanted to keep the original design.

So Talina worked with a CPH consultant to fine-tune her design. As it had a high surface-area-to-volume ratio and many corners and edges, achieving the required thermal performance was challenging. But the modelling showed that it could meet CPH standards by using strict airtight building techniques, extra insulation and triple-glazed windows.

Owl Woods also had to meet stringent bushfire regulations, as the site has a Bushfire Attack Level of BAL-29. “Meeting the BAL criteria is really about good quality construction: smart decisions about suitable materials, and sealing up the building and blocking up gaps so that embers can’t get into the building fabric. Because a Passive House has to be well sealed and built with strict attention to detail, it actually works hand-in-hand with the bushfire regulations, rather than being in conflict,” says Talina.

David and Yvonne have been living in Owl Woods since March 2019. The house is quiet, comfortable, spacious, light-filled and homely. The combination of CPH and passive solar design features, including orientation and controlling solar gain through triple glazing, eaves and external blinds, means that very little energy input is required. “It provides a very high level of thermal comfort, while using 70 to 90 per cent less energy than a conventional home,” says David. Overall, the cost of building Owl Woods stayed under 10 per cent more than a conventional build for a comparable home. 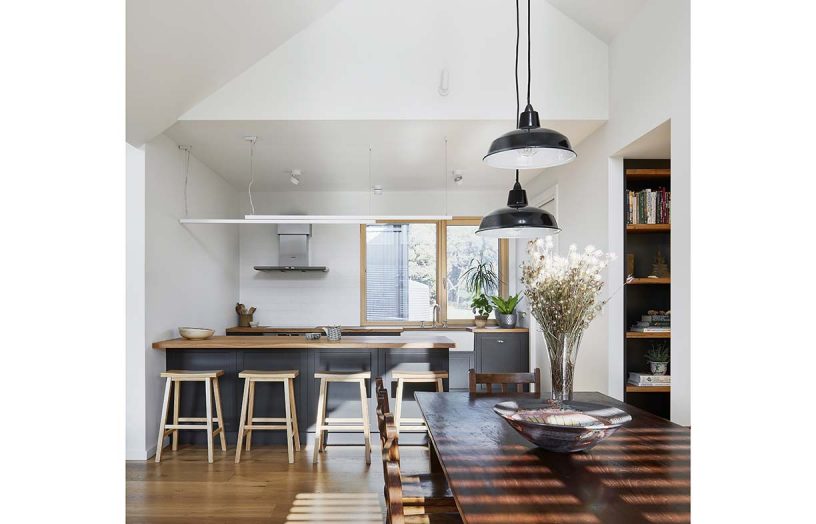 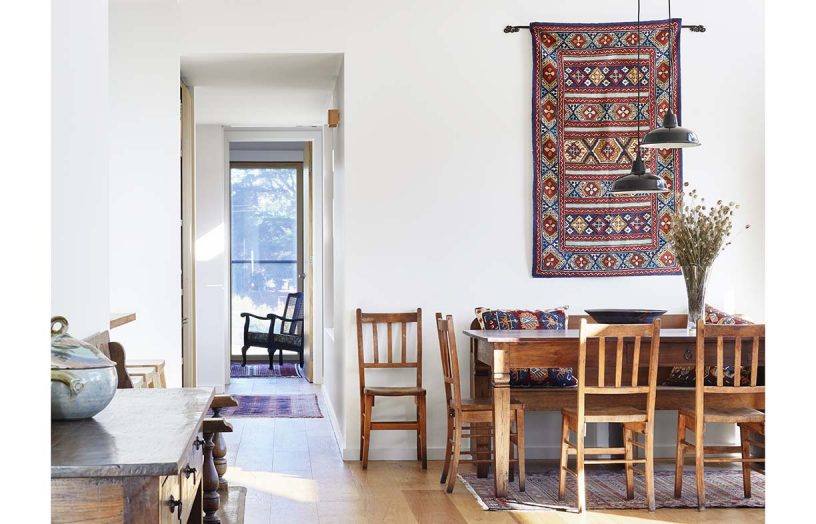 The house is all-electric, with an induction cooktop and recirculating carbon-filter rangehood. Fresh air is provided by a mechanical ventilation with heat recovery (MVHR) system integrated with a Daikin 3.5kW reverse-cycle air conditioner unit.

Trentham is 700 metres above sea level, and the climate varies from sub-zero temperatures in winter to over 40 degrees Celsius in summer. Sensors placed around the house track temperature and humidity, and figures show that from April to December 2019 the house hovered around a comfortable 20 degrees Celsius with a healthy relative humidity level of 40 to 45 per cent, despite large fluctuations outside. The exception to this was when David and Yvonne were away for two weeks in October.

The benefits of a Passive House go beyond thermal comfort and energy efficiency. The constant air filtering provided by the mechanical ventilation with heat recovery (MVHR) system gives a dust, pollen and largely insect-free indoor environment, which means healthier air, no mould and less cleaning. David also points out that their washing dries easily on a hoist system in the laundry. “We’re using our dryer out in the garage to store beer and will never use it for clothes again,” he laughs. Passive Houses also perform well acoustically, due to the heavy insulation and sealing. This blocks out unwanted noise, but also cuts down natural sounds like wind, birds singing and rain on the roof. “I actually still miss that a bit, because I do like hearing the wind in the trees,” says David, who estimates that it took six months to get used to the silence. “So often when it’s windy, I’ll open a window.” 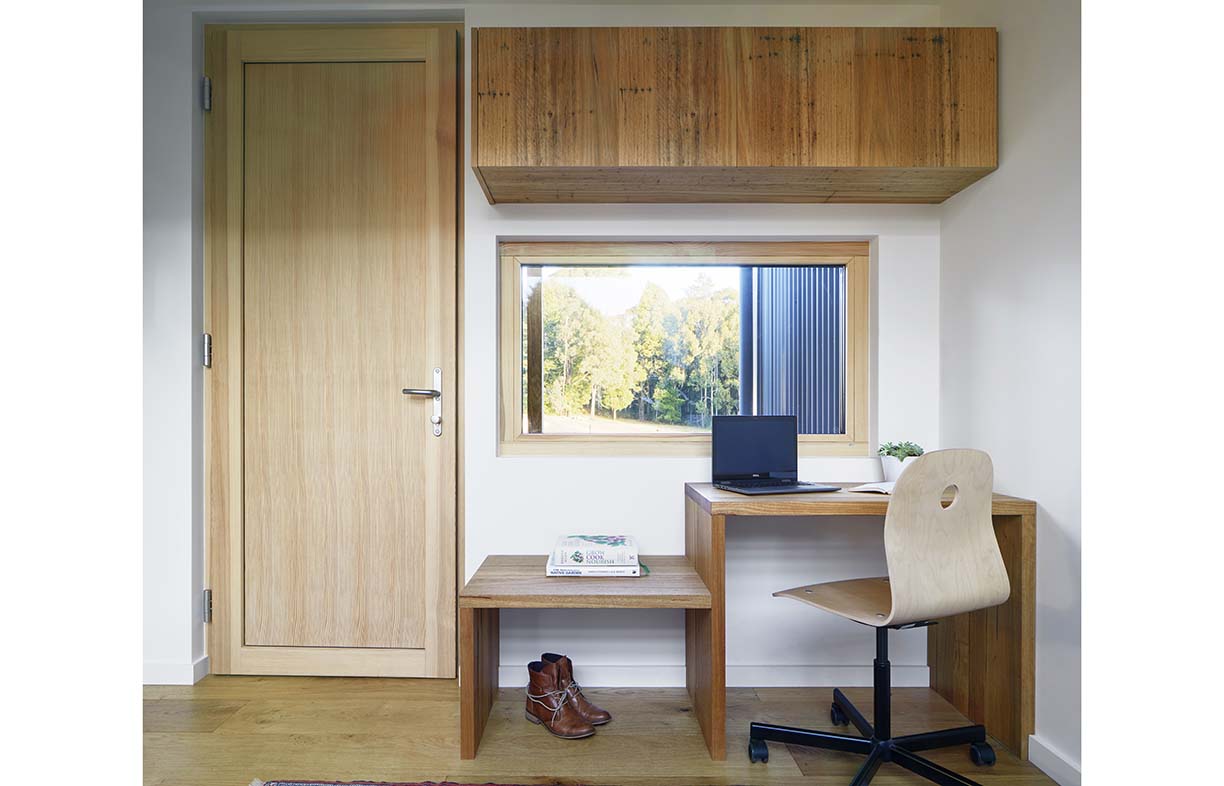 A study nook in the western link enjoys a treed outlook. Joinery is blackbutt, sealed with natural oils.

Another consideration is that it is beneficial to prepare at the time of the build for potential future alterations or additions, to avoid creating holes in the building envelope later on. David and Yvonne are waiting a full year before deciding whether installing solar power is cost-effective for their low energy needs, but the infrastructure was included in the build in case they do decide to go ahead.

Talina loved the project. “The best parts were the amazing collaboration we had with the clients and builder, and the fact that Yvonne and David are really happy,” she says. She has recently completed training to become a Certified Passivhaus Designer, and Owl Woods won her firm the 2019 ArchiTeam Sustainability Medal.

David and Yvonne are thrilled with the outcome. “We’re really pleased and very lucky,” says David. “We found the right architect and the right builder and it all worked.” 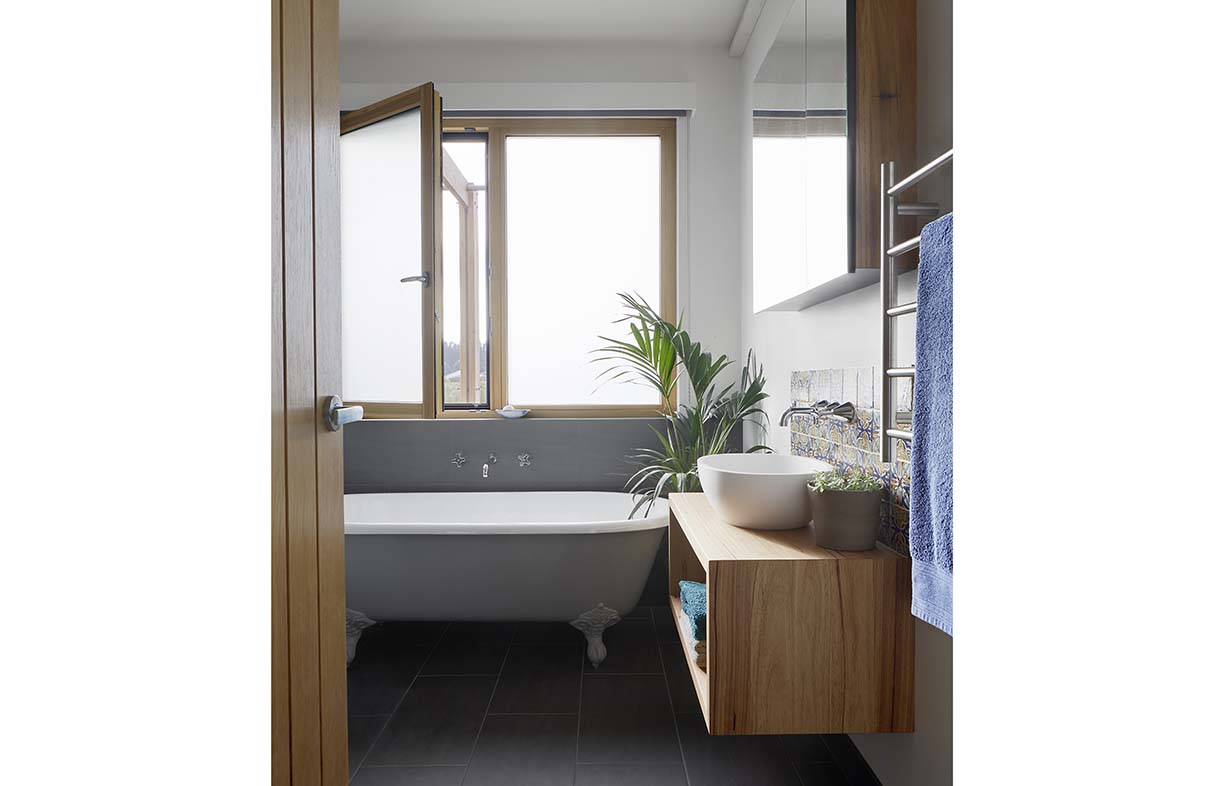