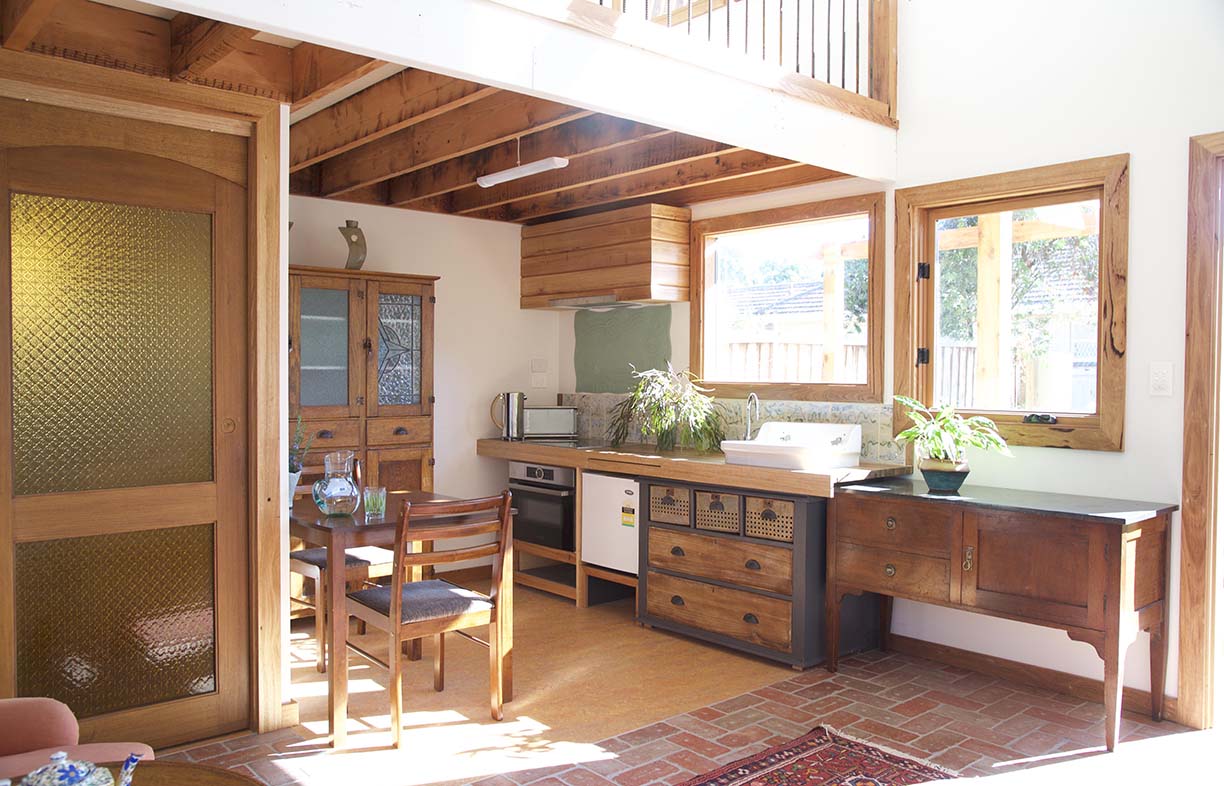 The project achieved a 7.2 Star energy rating, but the expected ‘as built’ will perform even better, which will be confirmed with 12 months of energy monitoring. Heating, cooling, and energy use are kept to a minimum due to the home’s compact size and high energy rating.

Subdividing her backyard to build a small-footprint house for herself has allowed Vicky Grosser to show how appropriate development can improve the sustainability and affordability of our cities.

Vicky Grosser has let out rooms in her three-bedroom Geelong West house for years. Along the way she’s forged enduring friendships and saved on resources by sharing her space. But as she neared her 60th birthday she began to think about how she could downsize into something smaller and more efficient, and free up the house for other people to share the double lot in a sustainable way.

“I originally thought about building a Tiny House or granny flat in the backyard,” she says. “After chatting with a cousin who is a town planner I decided it was best to build something more permanent.” This decision had pros and cons. Vicky was forced to subdivide, adding cost, as Victoria’s restrictive secondary dwelling laws still require a dependency relationship between granny flat residents and the main house. But by setting her ‘tiny’ house on foundations (rather than wheels) the project could be useful to demonstrate how to increase density without sacrificing greenspace.

“I wanted to share the experience of doing things differently – with this project we had the chance to build small and high quality and use local suppliers and materials,” says Vicky, who is a potter and a carbon manager, working with individuals and businesses to reduce their energy use. “Most of us live in large homes to store stuff we hardly use, and really it’s just extra space that has to be heated and cooled.”

Fortunately, the 650-square-metre block was ideal for subdivision. The backyard faces north, and the rear right of way made it easy to divide the land to keep Vicky’s large pottery shed (in which she’ll park her car and store items she uses occasionally) and the magnificent eucalypt tree on her side of the fence. Architecture graduate Dan Prochazka – her friend and a former tenant who has experience building tiny houses on wheels – became the designer. 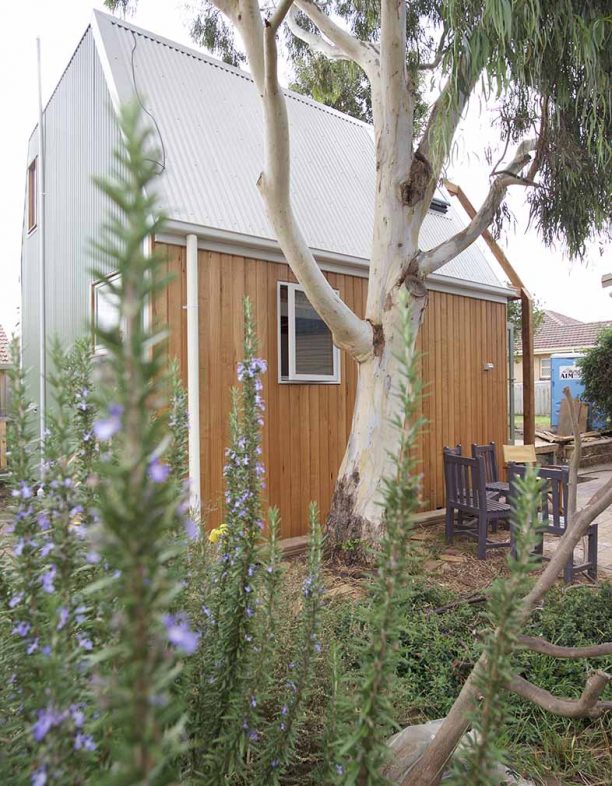 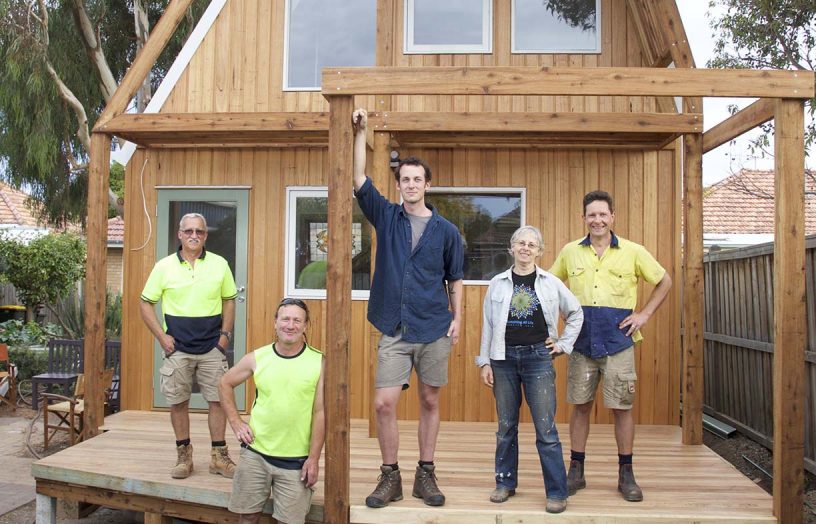 (Left) “The shape would have been just a square cube, but it’s been shaved off by the planning code and trimmed back because of the tree,” explains designer Dan Prochazka. (Right top) The project was a genuine collaboration between owner Vicky Grosser, designer Dan Prochazka, local builder Mark Lane and carpenters Duff Swanson and Pete Baird. (Right bottom) The structure is highly insulated and oriented to the north to optimise solar gain in winter; custom-built timber shading devices exclude direct sunlight from the north and west in summer.

“The brief was very detailed. The main part was to make the small space feel big and liveable. Vicky also gave me a list with the dimensions of her existing furniture she wanted to keep,” says Dan. “I’ve taken a few tricks from the tiny house movement, like not segmenting the space into rooms and instead leaving the bedroom and living spaces partially open.” The resulting split-level design is as charming as it is efficient. Extensive glazing to the north and east ‘borrows’ space from outside; the double-height ceiling and open mezzanine make the interior feel spacious, and the second-hand materials and furniture are welcoming and attractive.

Building something low-carbon was also important to the brief and materials were chosen for their low embodied energy; to the extent where even the double-glazed units were made without argon gas: “I wanted to avoid greenhouse gases wherever possible,” says Vicky, who commissioned local company Pickering Joinery to instead supply DGUs with a wider-than-standard 12mm air gap.

The house is ideally oriented for passive solar design and sealed tight to avoid air leakage. Hand-crafted timber louvres are angled to shade the northern glazing fully in summer but allow maximum solar penetration in winter to warm the recycled red brick floor. The glazing has been well thought through: cute, reclaimed stained-glass windows prevent overlooking and are triple glazed for thermal performance, openable windows are located to capture breezes and there is no glazing to the west.

For the design of the building envelope they involved energy assessors Ecogenie and ecoMaster insulation expertise to help refine the all-electric home so it would be energy efficient enough to utilise just a 1.08KW solar PV system, perhaps with a battery addition after energy use has been monitored. Their modelling shows that with the extensive insulation, Vicky will need to use her reverse-cycle air conditioner only sparingly.

Vicky has been hands-on throughout the build, supervising trades, painting, cleaning bricks and installing insulation. “I am the trainee apprentice,” she laughs. The close bond between Vicky and Dan now extends to local builder Mark Lane and carpenters Duff Swanson and Pete Baird. Each of them contributed ideas above and beyond their ‘official’ role, drawing on years of outside the box expertise and, in the process, developing new skills in environmentally sustainable design.

“Everyone has been so supportive, it’s been a really empowering experience,” says Vicky. “I was big on the small details like insulation and filling gaps, and the team  have told me that this project is the first time they’ve been given the time to really do some aspects properly. I’ve chosen to spend money on labour and reclaimed wood, rather than new materials.”

“There’s not many projects around like this one,” says Dan. “It’s been pleasant to have a lot of cross-dialogue with the builders, with Vicky, with the building surveyor and the engineers. Normally the architect is the only one who talks to all of them whereas in this project everyone is talking to everyone.”