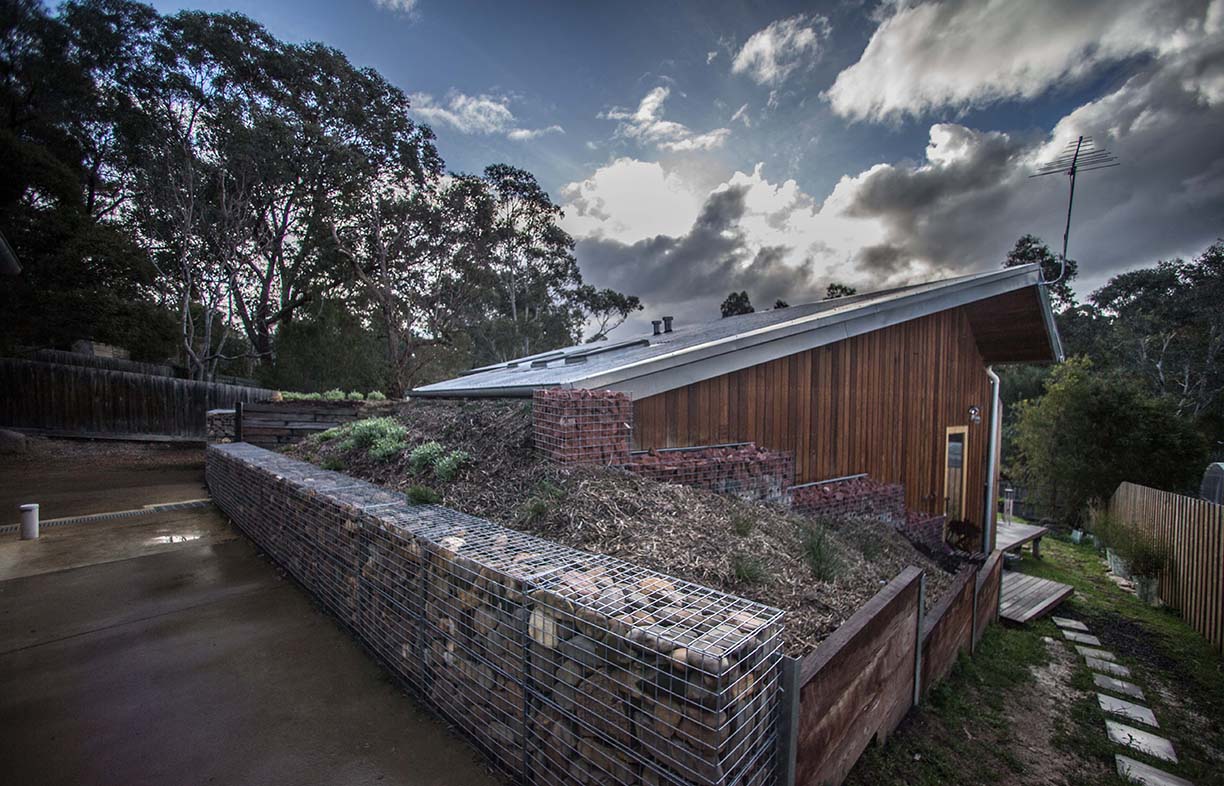 Natalie and Daryl's house is built into the north-facing slope of their block, with an earth berm around the rear for thermal mass.

This couple dived headfirst into the challenge of building their own Earthship-inspired self-sufficient home in outer Melbourne.

When Natalie Parcell and her husband Daryl Brooke decided to build a home in the outer Melbourne suburb of Hurstbridge, their aim was to push the limits of urban sustainability. Daryl’s dream was for the home to one day be completely off-grid, despite its location on a fairly modest-sized 575-square-metre block. The couple also wanted to use natural, recycled and locally sourced building materials wherever possible.

The couple enlisted the help of Craig Byatt, a Melbourne architect who had studied Earthships – the passive solar, recycling-focused building style originally devised by US architect and environmentalist Michael Reynolds. Using this approach as inspiration, the final house design draws on many of Reynolds’ principles including the use of recycled materials for construction, thermal mass provided by a rear wall connected to the earth, passive solar techniques and independence from the grid.

Built into the north-facing slope of the land, the house was originally going to use shipping containers for the structure, but that proved too challenging on the steep site with its tricky access via a shared driveway. Instead, Craig designed a reclaimed timber post-and-beam structure with gabion retaining walls filled with recycled bricks and masonry, faced with non-loadbearing mudbrick walls.

Many other recycled materials were incorporated, including corrugated iron for the carport, old window shutters, recycled-content insulation and Natalie’s grandfather’s old hand tools, which were crafted into door hardware by a local metal sculptor. Local, sustainably sourced products were also a big focus: the external cladding was milled from local fallen timber and the windows, doors and mudbricks were made by businesses in neighbouring towns. Earth excavated from the site during construction was used for the earth berm built up around the rear half of the house. 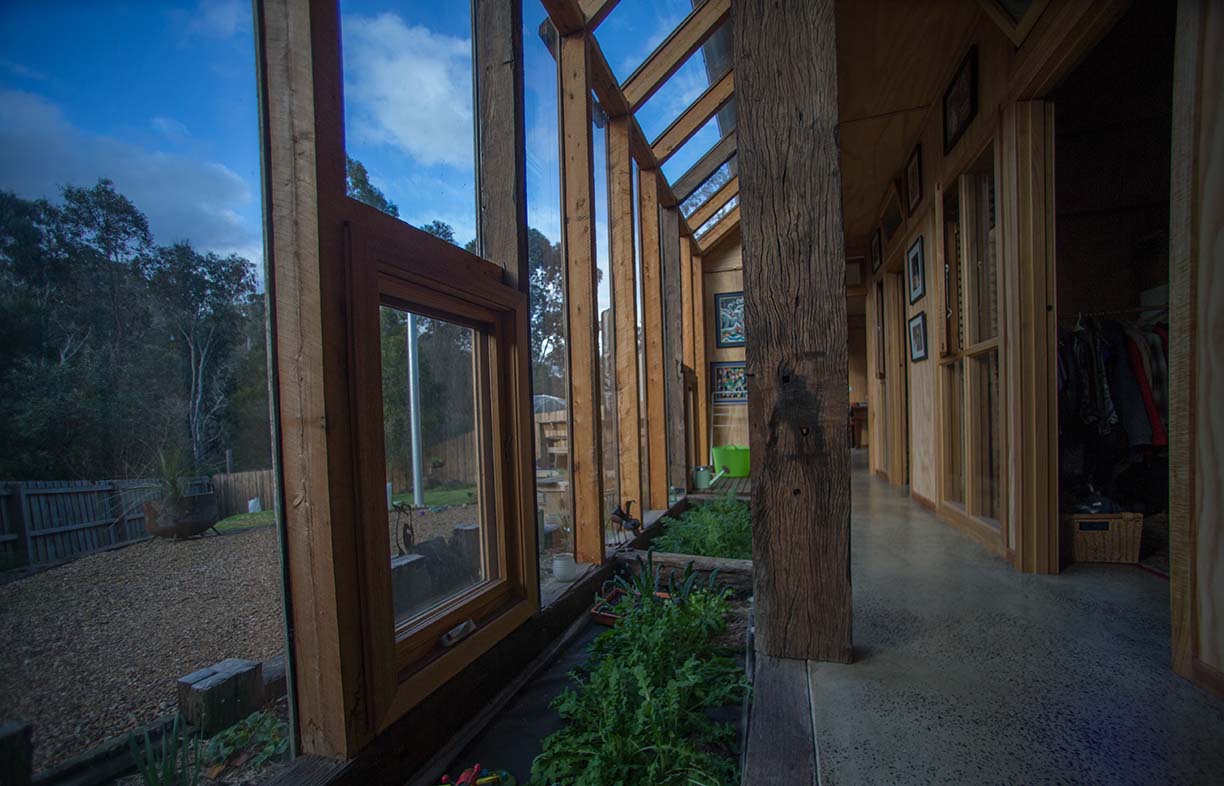 In a nod to Earthship design principles, a glasshouse on the north side of the house warms the interior space and provides growing space for winter vegies. 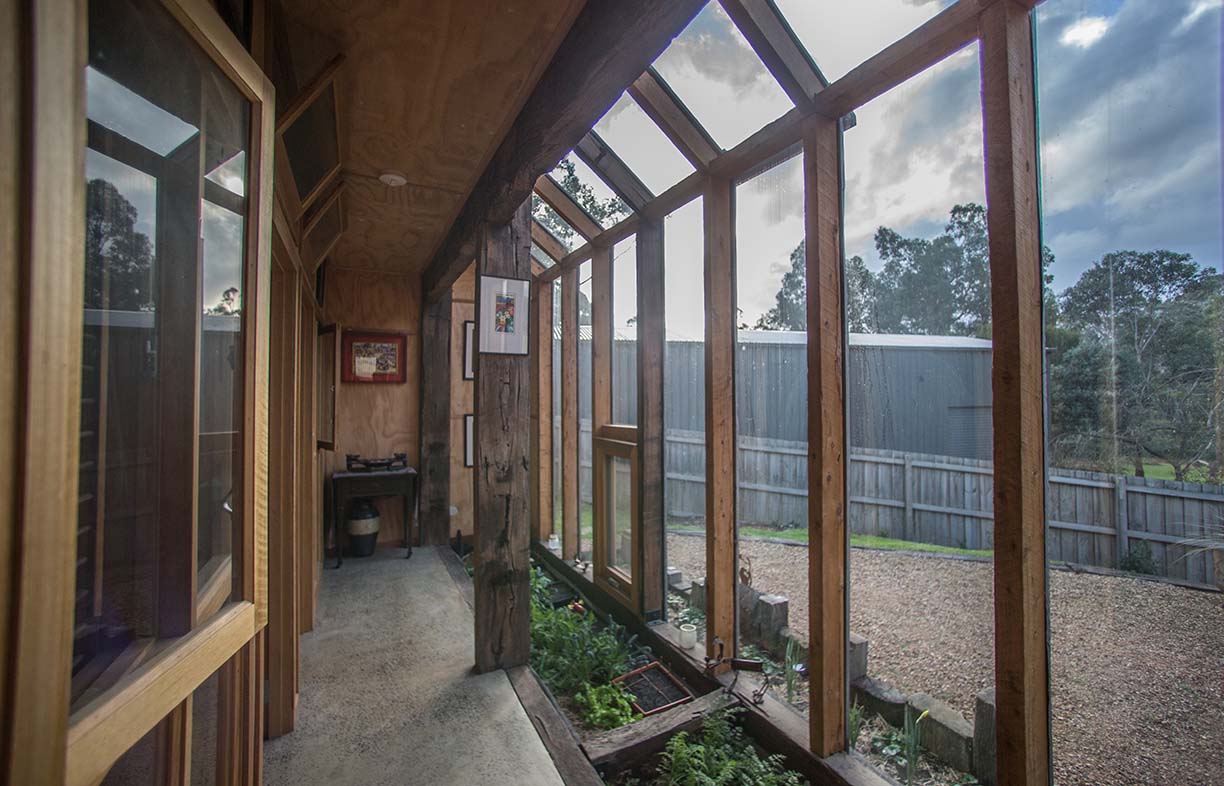 Daryl and Natalie made extensive use of recycled materials in their home, including salvaged redgum for the post-and beam structure.

The home’s layout also holds true to the intentional simplicity of Earthships, which are designed to be easy to build for beginners. It features two equal-sized bedrooms, one bathroom with a composting toilet, and an open plan kitchen, dining and living area facing north for optimal solar gain. A glasshouse on the north side captures the sun year-round, providing winter vegies. It’s an efficient design, and at 70 square metres it’s sufficient space for the downsizing couple.

Due to the unusual construction methods involved in the design, finding a builder willing to take on the project for a workable budget was difficult, and in the end Daryl and Natalie became owner-builders. Neither had previous experience building a home. “How on earth did I end up becoming an owner-builder?” Natalie remembers thinking. She was largely in charge of managing the house construction process, and found it surprisingly challenging. “It was a very big learning curve for me.”

As part of the construction process, Natalie and Daryl held several workshops at which participants learned about building with natural materials and helped create materials for the house. “There was an amazing quantity of ready-to-go earth bags when the workshops were done,” Natalie remembers. Some of the mudbrick walls were also built during the workshops, using locally made mudbricks.

Craig has worked with many owner-builders and says systemic impediments can make the process difficult. “Banks might not be as willing to give out loans to owner-builders, and building surveyors sometimes aren’t keen to work with them,” he says. His presence as a mediator helped shepherd the project through these hurdles. 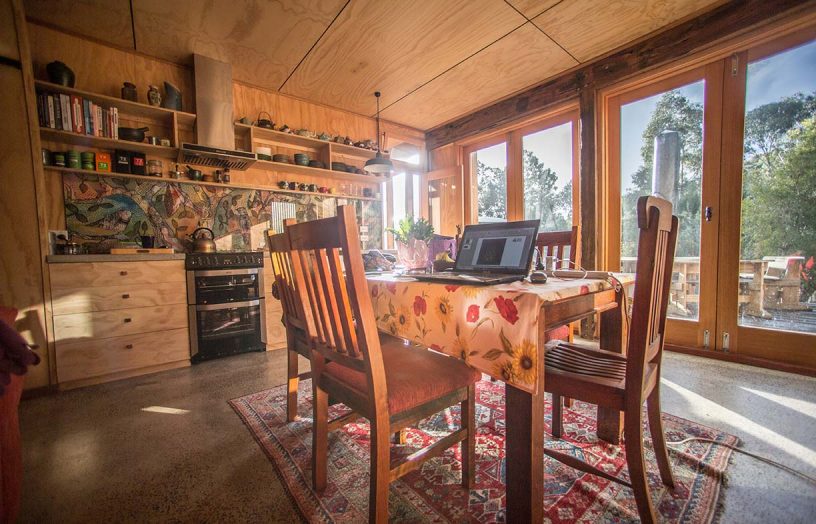 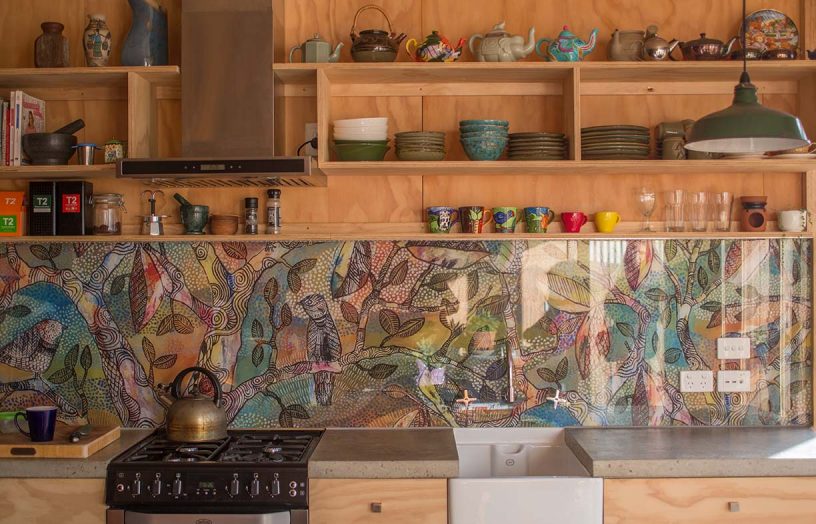 The glass kitchen splashback is printed with a colourful design by a local painter. 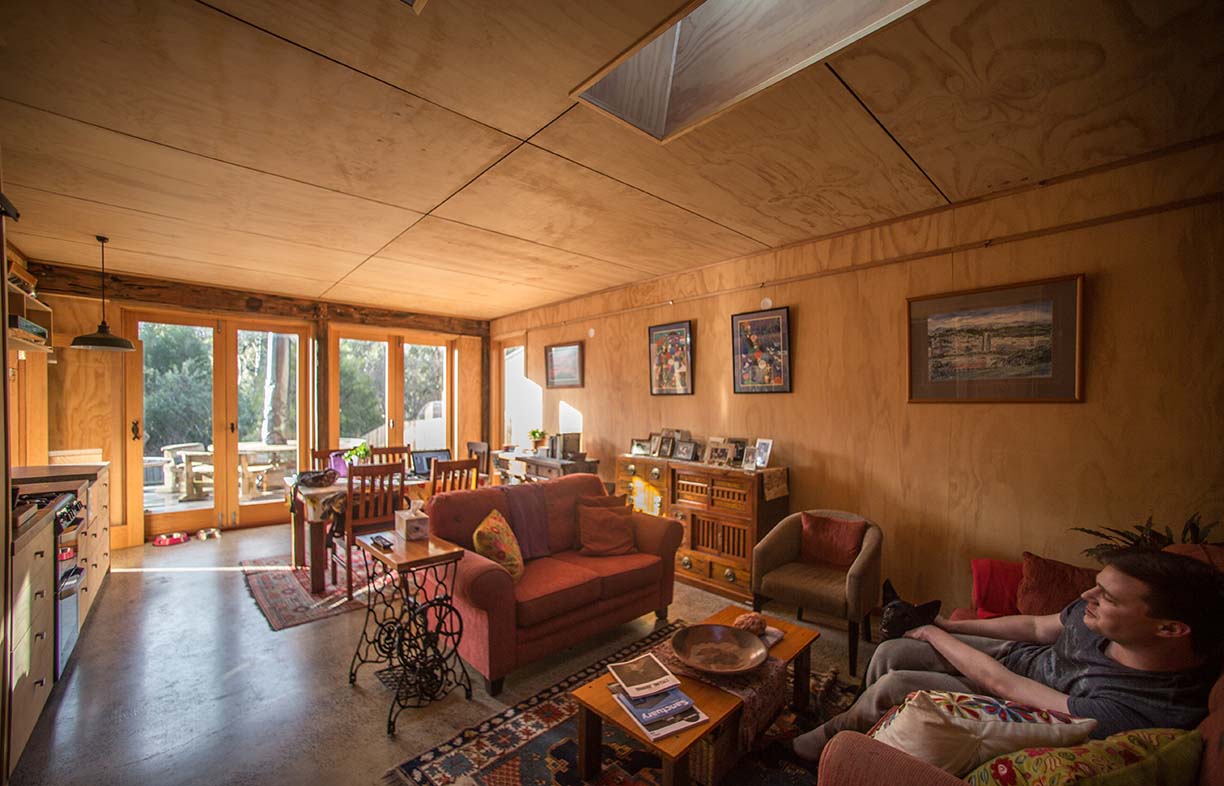 Operable double-glazed skylights towards the back of the house admit light and allow for ventilation. Interior wall and ceiling linings are low-VOC hoop pine plywood.

Natalie and Daryl have now lived in the house for three years. They say it has performed even better than they expected, using very little energy. As the earth berm has gradually warmed, they have been able to stop using any supplementary electric heating in winter; the internal temperature is a constant 17 to 23 degrees Celsius year-round. “Sometimes I go out on a winter morning and come straight back in to get another coat because I haven’t realized how cold it is outside,” Natalie says.

The small footprint of the house leaves plenty of outside space, and Natalie has transformed it into a permaculture garden, meeting another of the principles of Earthship design: growing food on site. She uses the glasshouse to propagate seed for the garden and for the small organic farm she manages nearby.

Though Natalie and Daryl’s house was designed to be completely off-grid, they are still connected for electricity for the time being as they monitor their energy use and save up to buy solar PV. They currently use bottled gas for water heating and cooking, but will move to a heat pump for hot water when funds allow. They are also waiting for the time when council regulations will allow them to transition to a biogas system for cooking. Natalie’s farm and garden produces a good supply of organic material; composted in a biogas unit it would generate enough biogas for their cooking needs.

Overall, the couple are thrilled with the home’s success, and feel the blood, sweat and tears they put in was worth it. “There’s something pretty special about knowing that we’ve gone through three years of winters and summers and have needed no heating or cooling in the house,” Daryl says. “It feels really good to live in a house that’s capable of that kind of performance.” 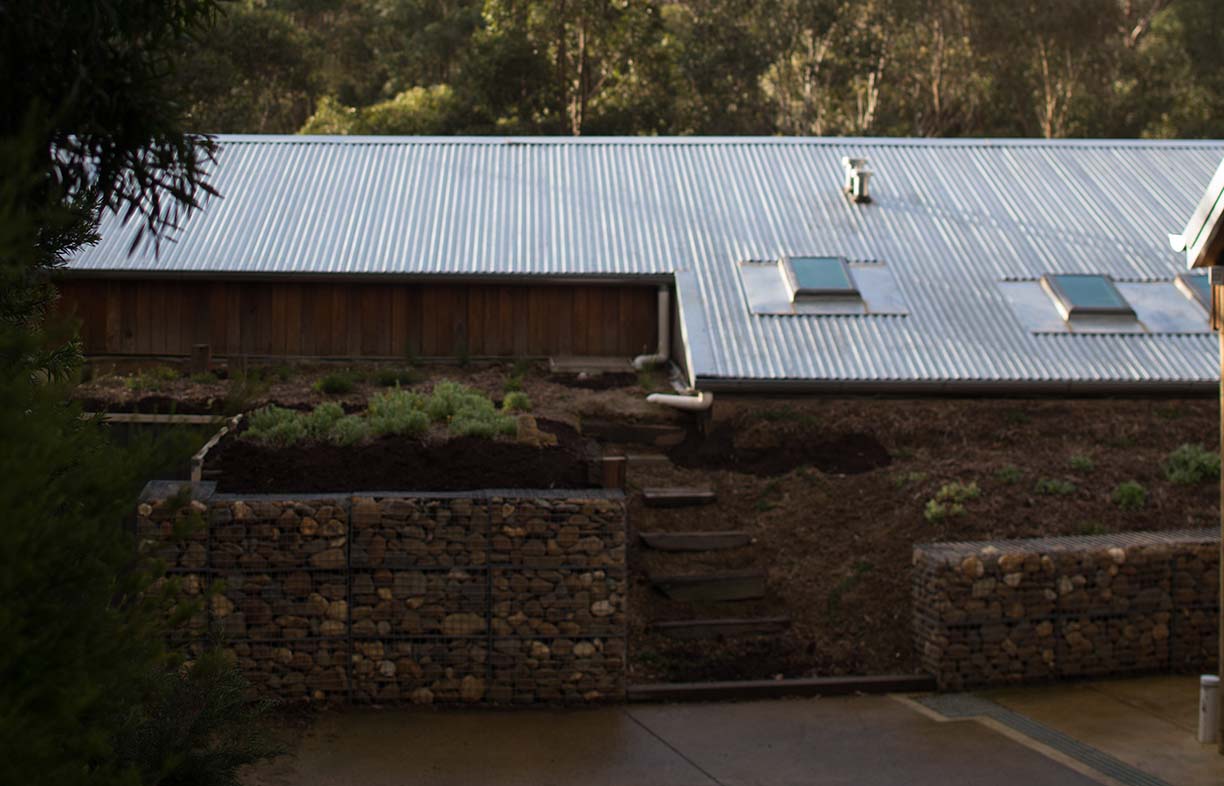 The orientation of the house makes the most of bushland views to the north and offers privacy from the road, as well as being ideal for passive solar gain.

Renew is a not-for-profit organisation dedicated to arming you with the unbiased advice and information you need to make your home and community more sustainable. If you enjoy our content, please consider supporting us by becoming a Renew member, buying our publications, or donating. Your support is critical to helping us achieve our goals.
Support renew