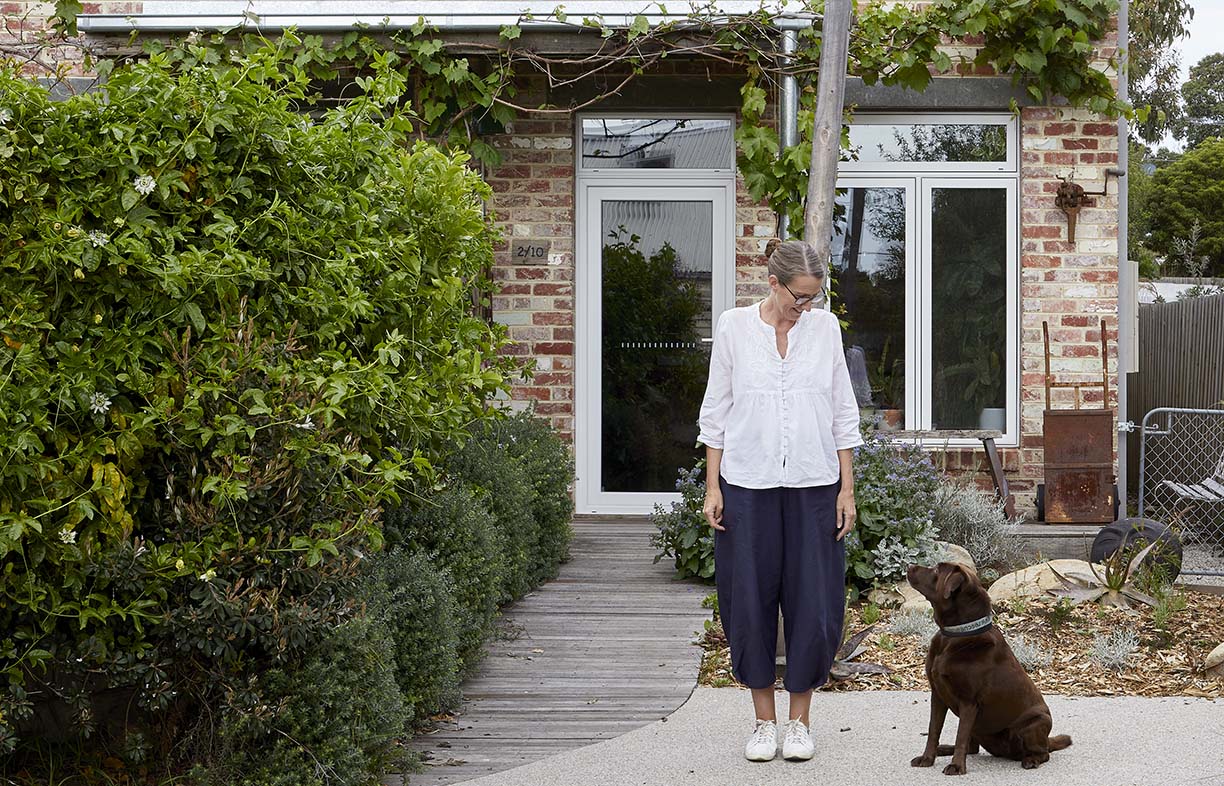 Building a new, highly efficient home in their backyard that’s tailored just for them has brought this Melbourne couple satisfaction and financial sustainability.

Arriving at Robyn and Jonathan Rich’s new home in Frankston, a bayside suburb in Melbourne’s south-east, the first glimpse the visitor gets is of a recycled-brick facade swathed in greenery, tucked behind the original house at the back of a deep block. Entering past flowering shrubs and under a small vine-covered verandah straight into artist Robyn’s studio, the self-contained yet welcoming impression continues with a quiet, sunny living space furnished with pre-loved leather couches and more plants. Robyn’s art is everywhere.

This meticulously ordered home is the couple’s bespoke creation: they designed it and project-managed the build, carrying out a lot of the work themselves. Veterans of several home renovations, in 2003 they bought this block with its 1920s weatherboard house, making the move from the Mornington Peninsula to be closer to public transport and schools. “It was a very rundown house – the best that could be said of it was that it had a nice front fence!” jokes Robyn. Though they improved it over the years, once their daughter was grown they turned their minds to their next step. 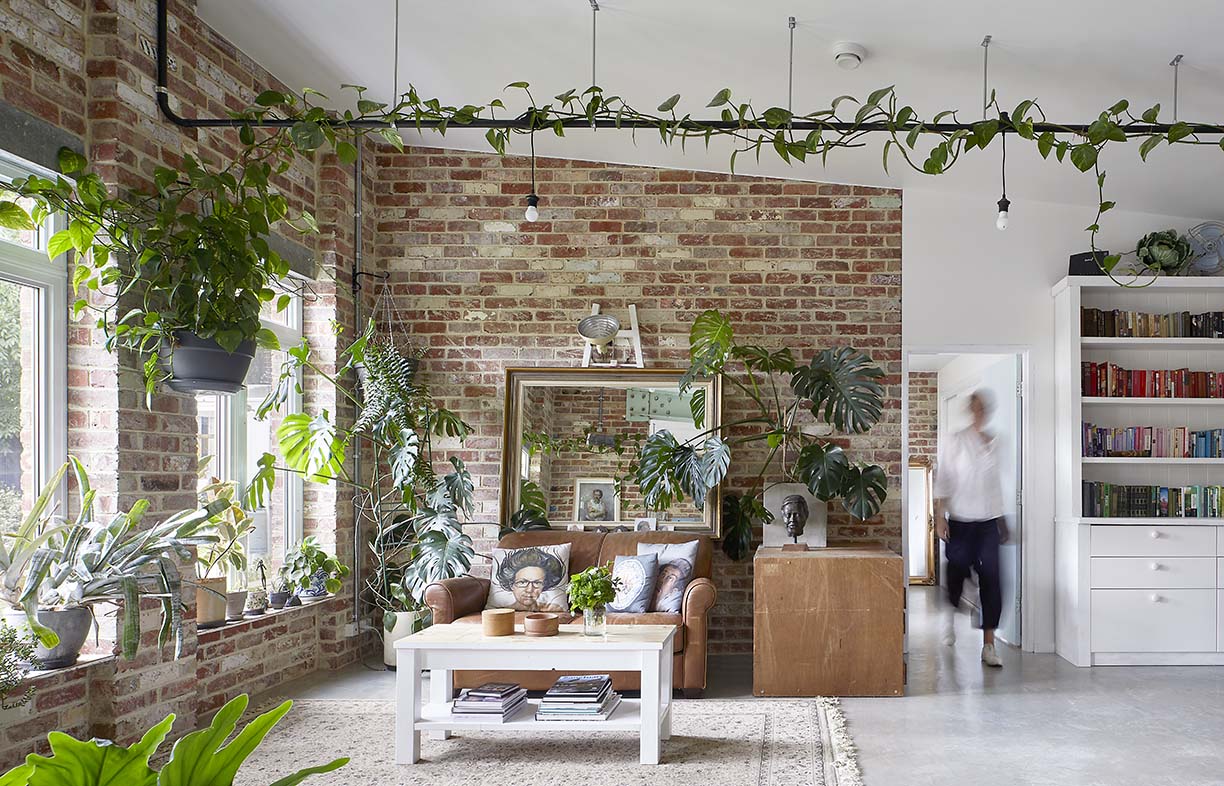 The house is full of greenery to help keep the internal air fresh. All the furniture is second-hand, salvaged or made by the couple, and even the industrial-style light fittings are handmade from electrical conduit found in a skip.

“While they have character, old houses just cost a packet to heat,” says Jonathan. “With climate change looming, we wanted to build something that was largely self-sufficient for energy or even net positive.” Another priority was a healthy home, as Robyn has had immune system issues. “We wanted a home that was nurturing, where we felt happy and healthy and knew that we were doing the right thing for the environment,” she says.

Blessed with a large backyard to work with, the couple subdivided the block and designed a simple, square house set close to the side and back boundaries at the southern end. This allowed for excellent northern orientation for solar access. The living space opens onto a private garden, and there is also room for two double garages between the two houses. Inside are two bedrooms, Robyn’s studio and a study for engineer Jonathan, an open-plan living space and kitchen, and a single bathroom. “It was important to have a home that both of us could work in without getting in each other’s way,” says Robyn of the carefully designed 150-square-metre space. “We could probably even have gone smaller than this.” 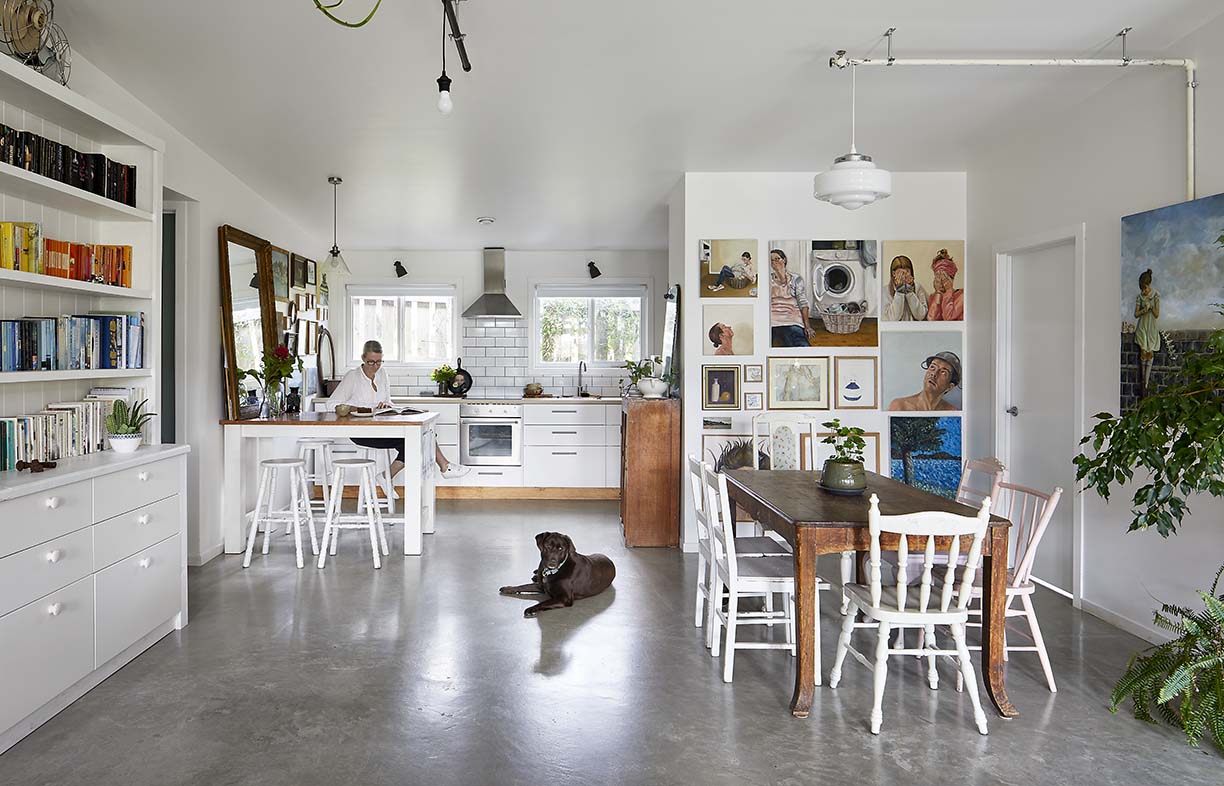 The house has less than one square metre of window on each of the east and the west walls. While the windows on the south are close to the boundary, opposite the kitchen Jonathan and Robyn have removed every second paling from their fence, giving them discreet glimpses into the park on the other side.

The main priorities for the structure were thermal efficiency and airtightness. A hand-trowelled concrete slab floor provides thermal mass and the walls are a combination of recycled red brick (used for both double brick and reverse brick veneer construction), insulated timber stud frame and rendered foam insulation, all coming in at over R4. The raked truss roof is insulated to R6.1. “We were very keen on the exposed brick for its aesthetic,” says Jonathan. They used 14,500 bricks in the house and the two garages, all from demolitions in the area. “Some have graffiti or kids have drawn pictures on them: a whole lot of homes have gone into this one,” adds Robyn. “Recycling is our thing, so knowing they’ve been used before and are getting another life is great.”

Jonathan and Robyn were very hands-on during the build, assembling the frame, installing insulation and making sure the building wrap was fitted and taped to avoid all gaps. “By being on site all the time we could make sure of the level of care and attention to detail,” says Robyn. They also found themselves doing a lot of teaching: “explaining to the tradies why they couldn’t just put a hole in the building wrap!” 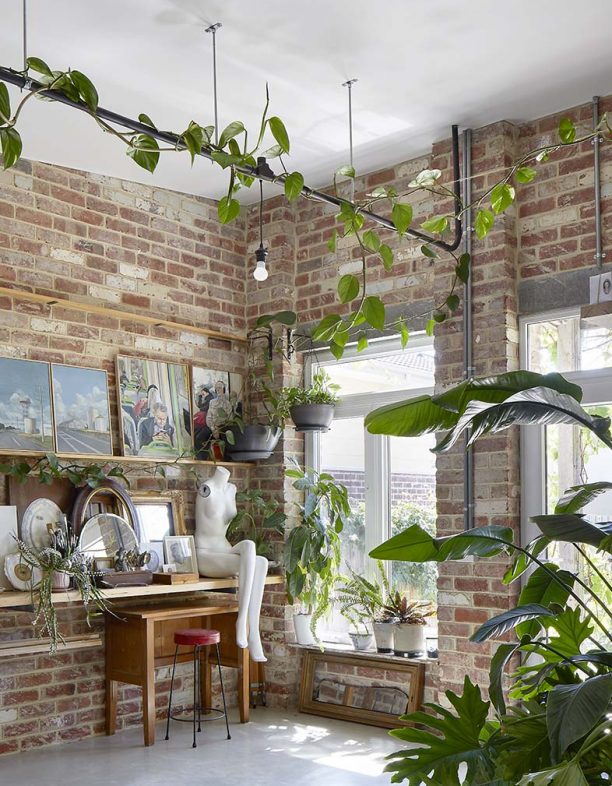 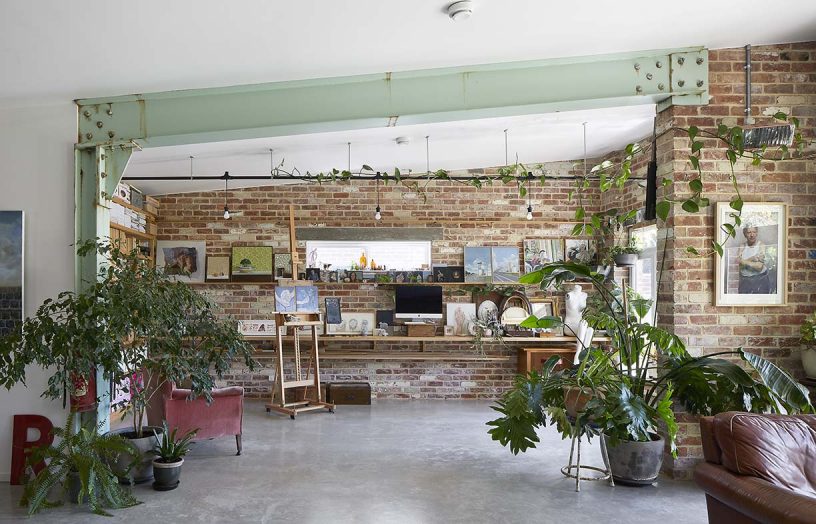 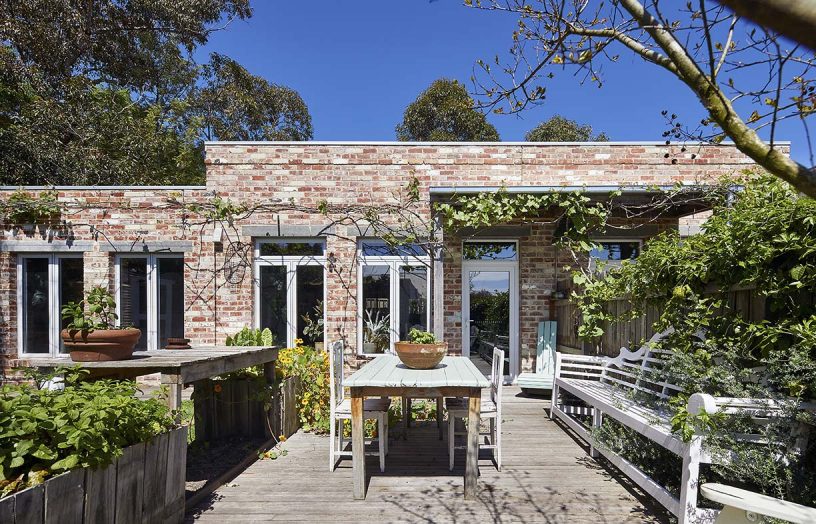 Left: The workbench in Robyn’s studio is crafted from the timber used as formwork for the concrete window and door lintels. Top right: The ‘steel’ beam that contributes to the home’s industrial aesthetic is not steel at all! Jonathan added timber flanges and Robyn cast plaster bolts and gave a clever paint job to what is really a timber laminate structural beam.

The result is impressive. Coming in at 7.9 Stars, the home performs very well thermally with minimal energy input. A mechanical ventilation with heat recovery (MVHR) system provides fresh air with minimal loss of internal warmth. It runs continuously, on low overnight and medium during the day, and uses well under a kilowatt-hour of electricity per day. Ingeniously, it’s coupled with a sub-soil heat exchange loop. A 65-metre-long pipe buried under the driveway contains a water/glycol mix that is circulated using a small pump, transferring the stable ground temperature to the air entering the MVHR system. “The ground loop tempers the outside air, all for the tiny cost of running the pump,” explains Jonathan. They also have one small efficient air conditioner for occasional additional heating and cooling, positioned in the kitchen where its conditioned air goes into the MVHR intake vents for distribution around the house.

The couple’s commitment to sustainability, recycling and minimal waste is evident everywhere in their home. All the furniture is second-hand, salvaged (often from hard rubbish) or built by them. The fencing and verandahs reuse timber from a demolished fence and woodshed, and Jonathan built the wicking beds for vegies from old bathtubs. Even the industrial-look light fittings are made from electrical conduit found in a skip and painted black. 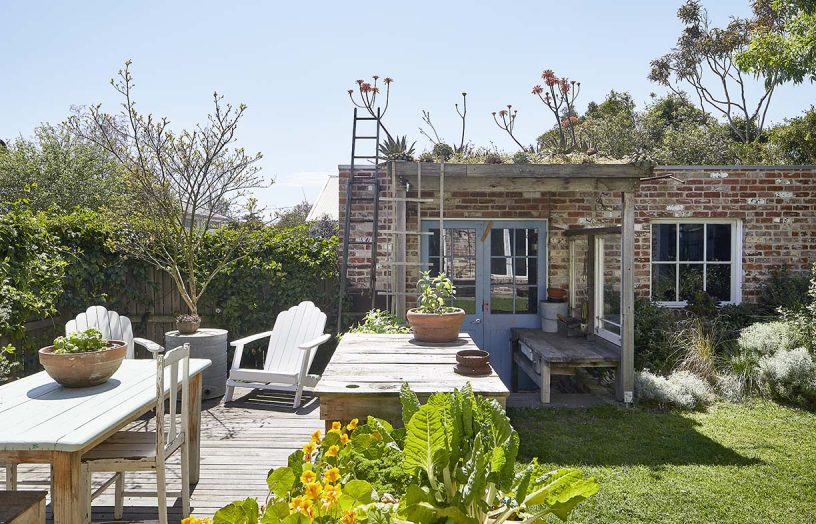 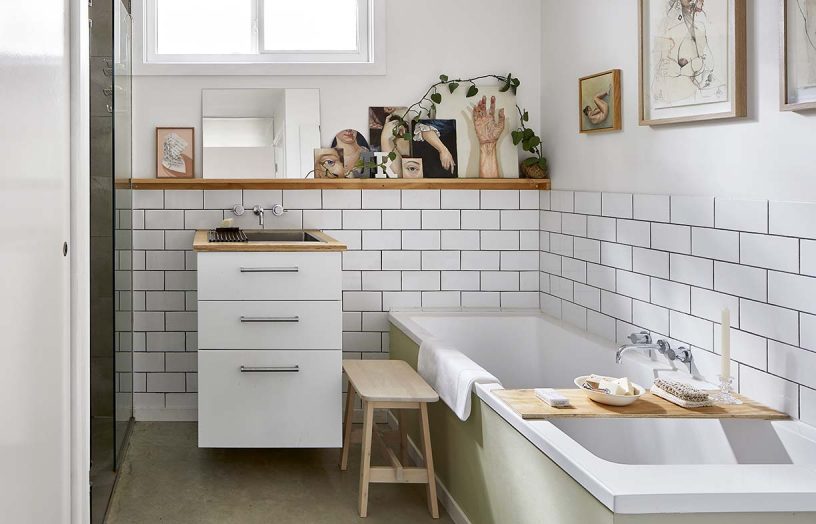 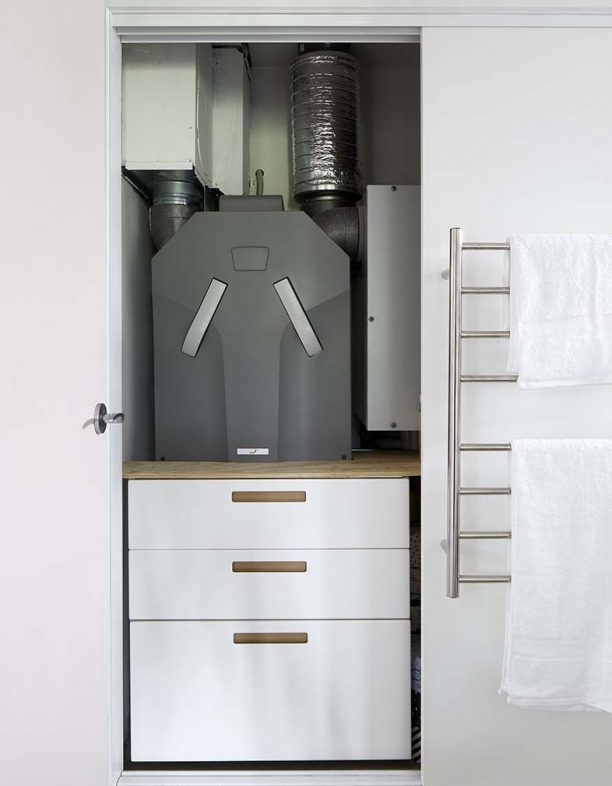 Top left: "We built the garage to look like another room, as we look out at it from the house," says homeowner Robyn. It's used for storage and as a workshop as well as housing the couple's new Nissan Leaf electric car and its Schneider Electric 7kW EVLink charging station. The doors to the garage from the garden came from an old church. Bottom left, right: The MVHR system is housed in a cupboard in the bathroom that also functions as the laundry. The hot water tank is here too – one thing Jonathan would do differently next time. “I was thinking old school, that we’d get some extra heat inside from the tank, but it’s too well insulated!” he laughs. “We should have put the tank outside. It’s a waste of space that could have been storage.”

Part of Jonathan and Robyn’s motivation for their project was financial sustainability for their older years – they now rent out the original house – and they made wise choices about where to invest money in their new home. “We spent money on the important things, the things that will affect the performance: the double-glazed windows, the ventilation system, the solar,” says Robyn. “Then the kitchen and bathroom fittings are the cheapest we could find!” A 5.2 kilowatt solar system more than covers the home’s energy use of around 13 kilowatt-hours per day, and they are net exporters of energy. They have recently bought an electric vehicle and have just installed more solar to help charge it. “So as well as no power bill, we now have no fuel bill either,” says Jonathan with satisfaction. “It’s lovely to be so well insulated from the financial pressures of using energy.”

Robyn is clearly very content with the house too. “We wanted it to be a house we can actually live in, where we can throw paint around, do woodwork,” she says. “I love the way it feels – it’s so tranquil.”