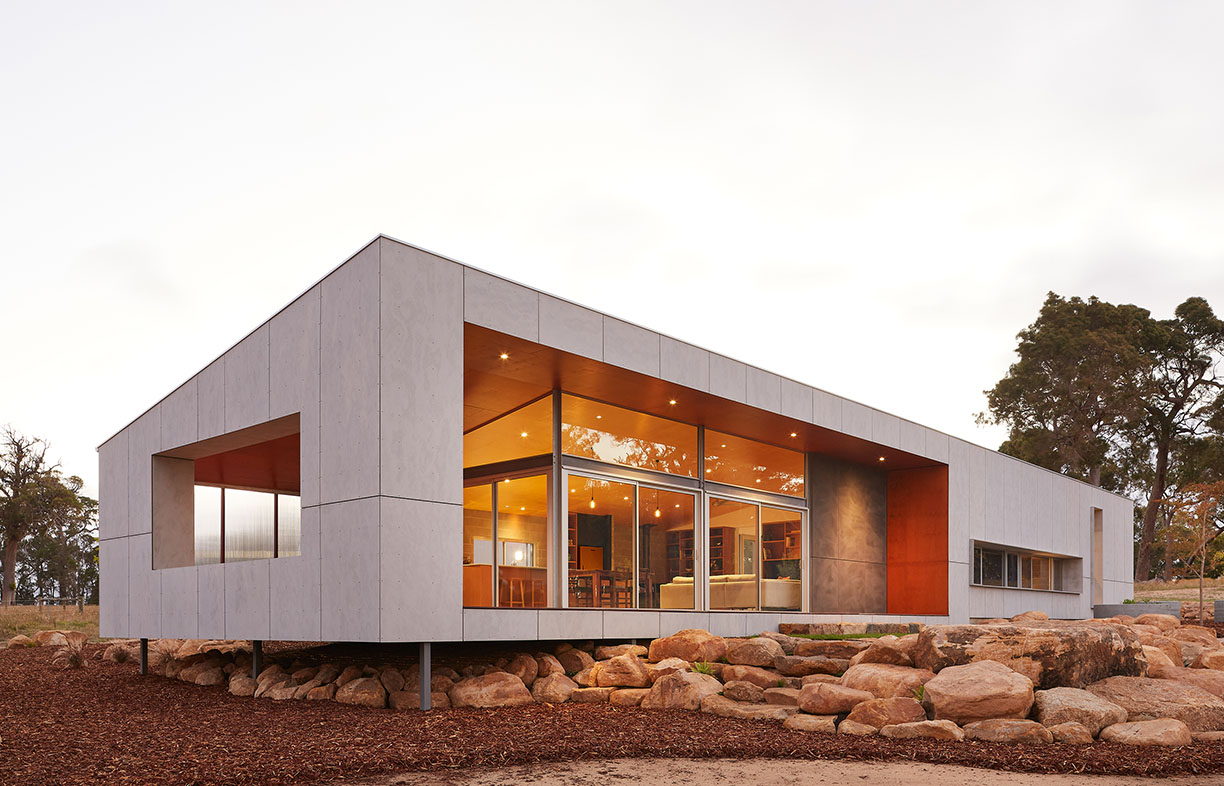 Perched on a rise overlooking grazing paddocks fifteen minutes’ drive from Margaret River, Jennifer’s house is far from your typical timber farmhouse. Rather, its simple rectilinear shape gives the impression of a solid mass with a house carved out of it.

Jennifer was living in town, in a largish house with too many rooms that took no advantage of the north-oriented block. “I was keen to have a smaller house, with no wasted space,” she says. “It feels like more of an achievement to go for less space and less stuff, than to go bigger.” She also had a preference for solid, raw materials with minimal finishes.

“I particularly wanted concrete block internal walls – solid walls so that you couldn’t hear from one room to the next, plus I like the look, the texture,” she explains.

Her preferences suited her architect brother Paul, recruited to design the house. “I like to specify materials that are in their natural state where possible – when a client is open to them. Unfinished and prefinished materials generally don’t need much if any upkeep or repainting, which is great from both a maintenance and a sustainability point of view.”

Paul’s design references the form of a farm building, with a sloped roof and no eaves.

“I started with a simple shed-like space, which is cost effective, and then extracted volumes out of it to achieve a glass box-within-a-box for the living areas.”

The house is aligned with its long axis east-west. The bedrooms are at one end and the living space, with study nook, at the other. At the eastern end of the building, a large space has been carved out to become a semi-outdoor living area. A large sliding polycarbonate-clad door to the south moderates summer sea breezes and protects against cold storms in winter, and there’s a framed view to a stand of trees to the east and expansive valley views to the north. 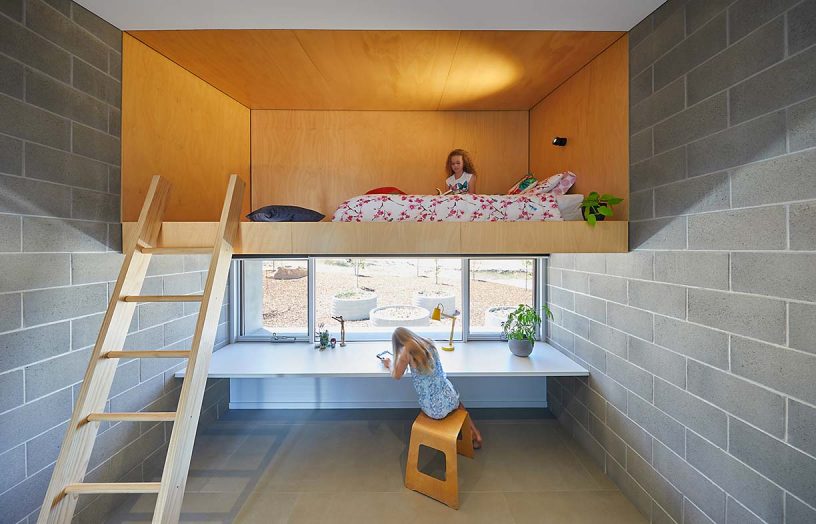 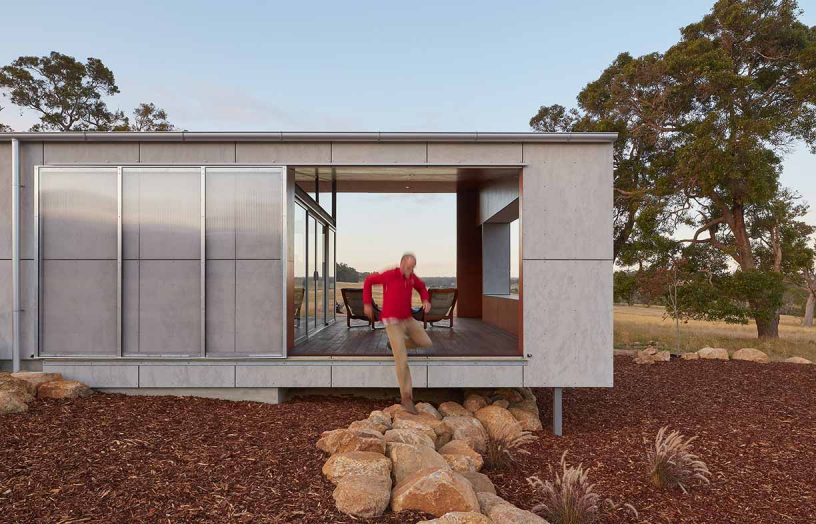 (Image 1) The kids’ bedrooms feature mezzanine sleeping platforms with built-in desks underneath, allowing the footprint to be kept small while still allowing for plenty of play space. “It’s an idea I had for my own kids’ bedrooms but never put into practice,” says Paul. “Jennifer’s girls are pretty active and I knew they’d love the above-ground spaces.” Jennifer has spent some time sourcing just the right safety netting for the platforms, which will be installed shortly. (Image 2) The semi-enclosed outdoor living space at the eastern end of the house is one of Jennifer’s favourite spots. A large sliding polycarbonate door to the south can be closed to block cold winter winds, helping turn it into an all-weather space.

The house is built on a concrete slab finished with porcelain tiles for durability and thermal mass. The construction is partially reverse block veneer: a timber stud frame on the outside of the concrete block walls holds batt and foilboard insulation with a total R value of about 4.8, and the cladding is pre-sealed compressed cement sheet chosen for its aesthetic and zero maintenance properties.

Inside, there’s lots of light thanks to extensive north-facing glazing. Good cross ventilation, plenty of thermal mass and appropriate shading to north and east windows combine to eliminate the need for an air conditioner. Hoop pine plywood ceilings, a small amount of plasterboard and built-in timber joinery marry with the block walls to create a neutral colour palette and an unfussy, low-key feel.

“For each material, each surface, I tried to source a sustainable version, and opted for Australian or New Zealand manufacture as much as I could,” says Jennifer. “That was what made the project exciting for me – each component is not what’s in fashion, but what made sense when it came to its origin and other sustainability factors.”

Having moved in with her two daughters in September last year, Jennifer is loving her new home. “It’s just an easy place to live. I particularly like sitting on the deck and enjoying the distant views from that slightly elevated spot.”

Paul is also very satisfied with how the project turned out. “The finished house form is very true to the initial thoughts and sketches that I had. It’s wonderful when that original idea can be followed all the way through to built form without being unnecessarily complicated.” 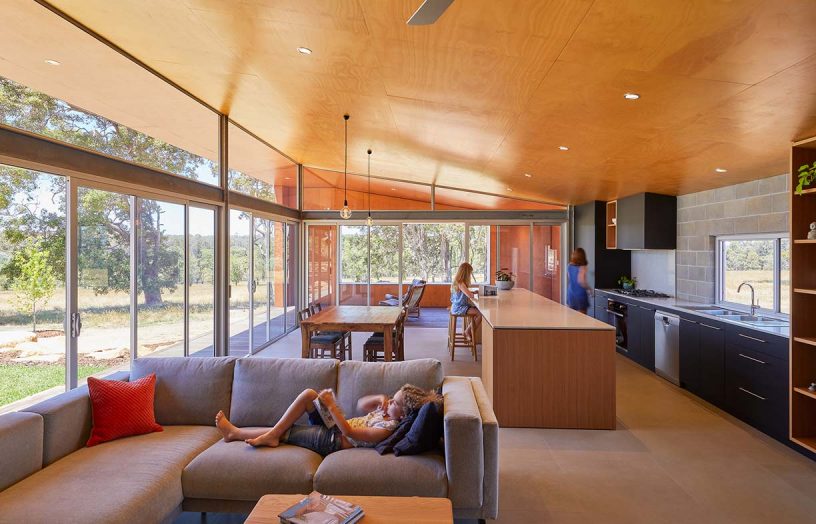 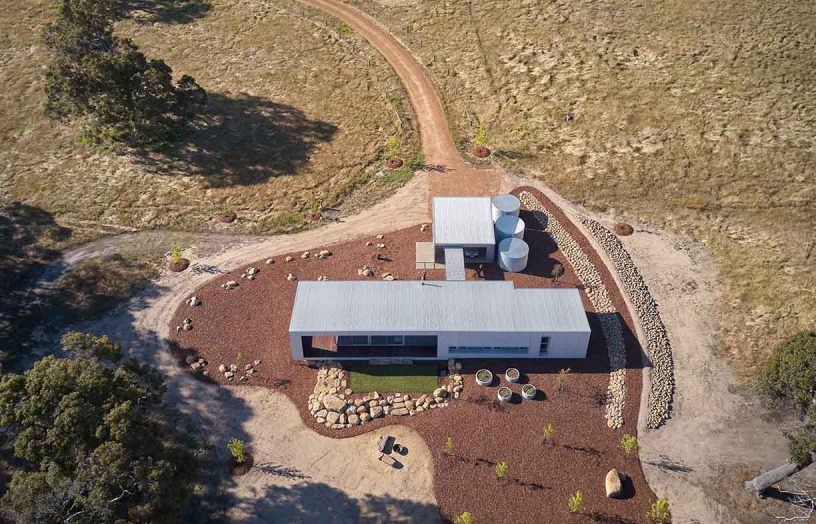 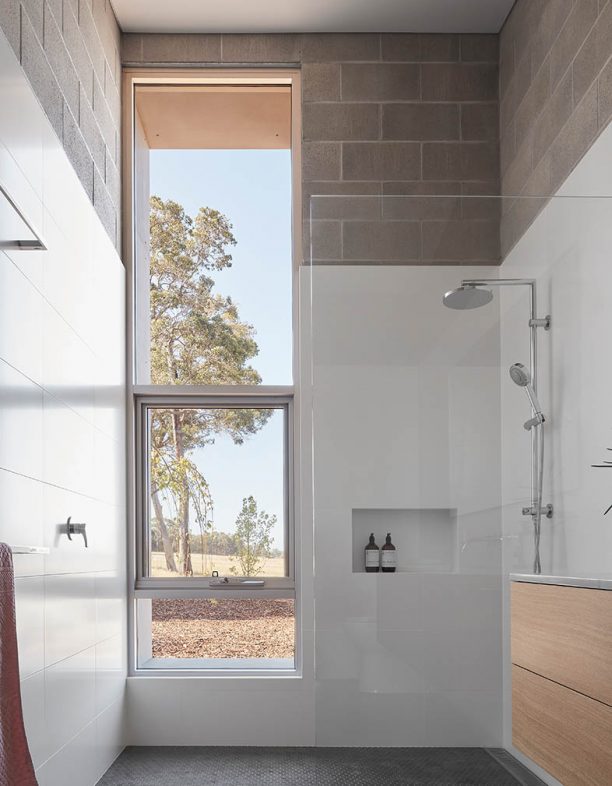 (Image 1) Interior plywood ceilings continue out to the eaves and ceiling of the covered deck, and high-level windows further blur the boundary between inside and outside, giving a sense of spaciousness to the modest-sized home. (Image 3) Jennifer particularly loves the house’s single bathroom. “I chose a natural bluestone mosaic for the floor that complements the concrete block and offsets the sleekness of the white wall tiles. And I love the full height window that Paul designed, as it frames the big redgum outside and floods the room with light.”
Designer
Archterra Architects
Builder
Cape Construction
Location
Margaret River, Western Australia
Size
House 170m2, Land 60.8ha