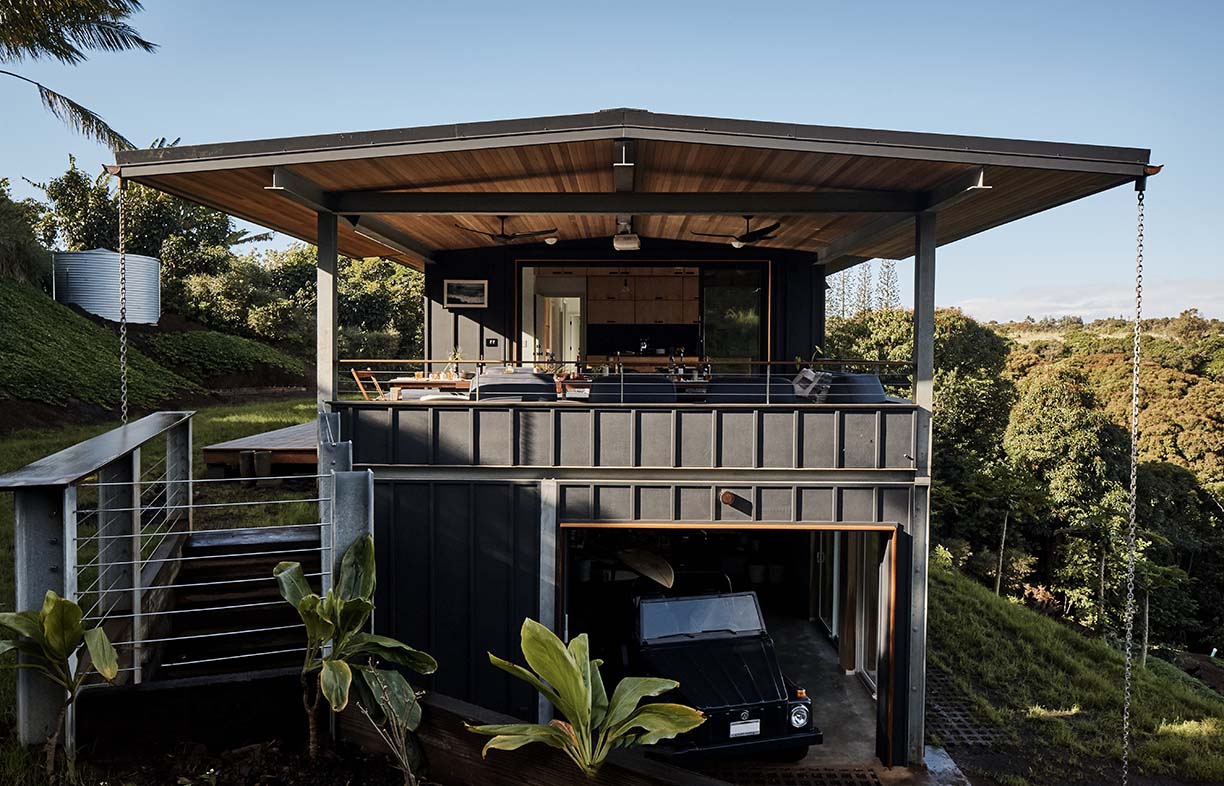 The living area is all on the upper storey, with a large garage and storage space underneath.

Set on a secluded site with ocean views, this off-grid house on the Hawaiian island of Maui demonstrates that a local size restriction needn’t get in the way of a functional, flexible, lovely home.

Graham Hill is no stranger to design challenges. Founder of small-space design consultancy LifeEdited, he’s been experimenting for years with smart concepts and technology allowing people to “live large in small homes or apartments”. These days he splits his time between his tiny (but very functional) New York apartment and Hawaii, where he has just completed a 93 square metre off-grid home in the hills on Maui’s north shore.

“There are building restrictions on much of the land on Maui – ‘secondary’ houses must not be larger than a certain size,” he explains. “On my piece of subdivided land, the limit was 1000 square feet [93 square metres]. So that was my challenge: let’s see what we can do with 1000 square feet, let’s make it off grid, and let’s make it a great place to live with the functionality of a much larger house.” 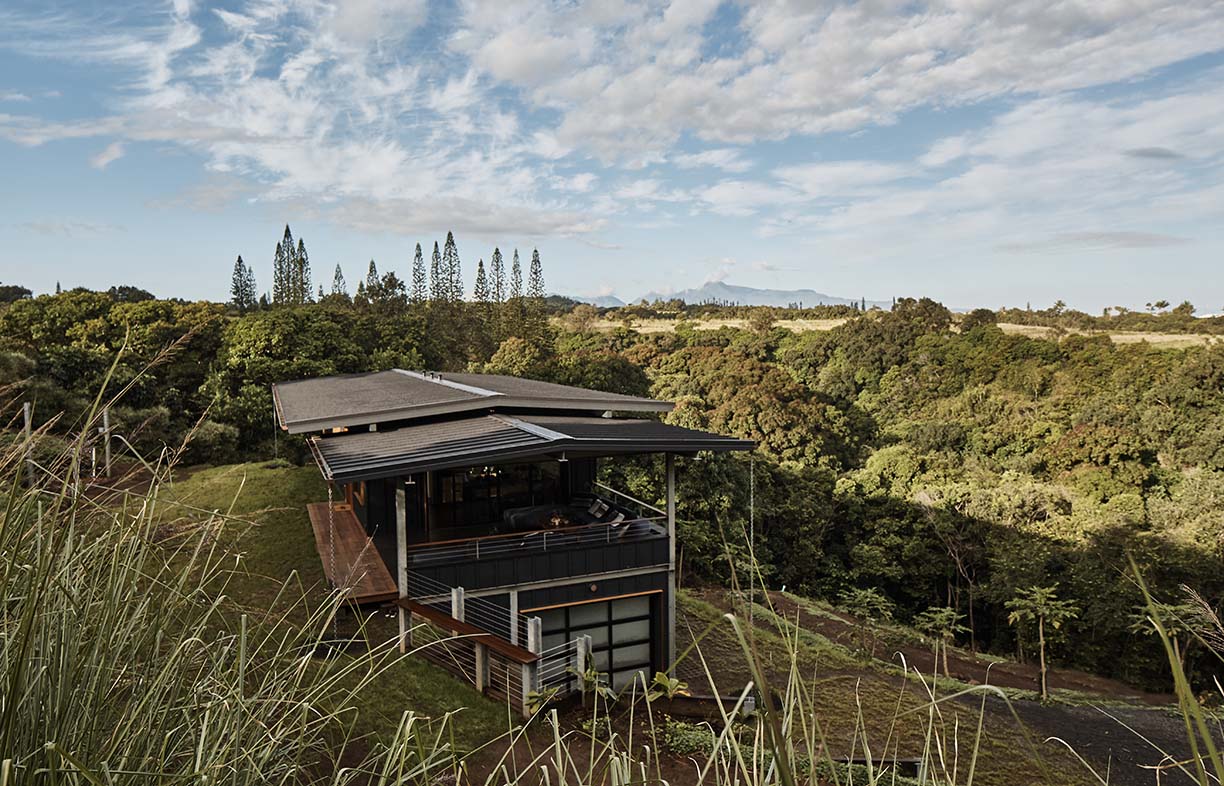 Graham’s house is built on a 0.9 hectare site, sloping down into a gully. “It feels very private, even though there are neighbours nearby,” he says. “There’s a great view of the water about a mile away, and of the West Maui mountains 15 miles away.”

The finished house is a useful demonstration of what can be achieved, especially for other landowners with the same size restriction. A simple rectangle, the house features four small bedrooms along one side, three of which transform quickly and easily into study, sitting or eating spaces with the help of neat fold-up ‘Murphy’ wall beds with attached folding tables from Resource Furniture. “Even though they are really small rooms, they have a secondary purpose,” says Graham. Along the other side, two bathrooms and extra toilets – all composting, waterless ones – cater for the possibility of a full house of guests.

A modest kitchen and interior dining area at the end of the house features a small lounging area, but it’s in the expansive ‘lanai’ (verandah) where most of the living is done. Here, modular outdoor furniture can accommodate up to 20 people for relaxing or meals. This semi-outdoor living space is ideally suited to the year-round mild warm microclimate here, 100 metres above sea level; wide roof overhangs shade the lanai and protect it from the sometimes heavy rains. 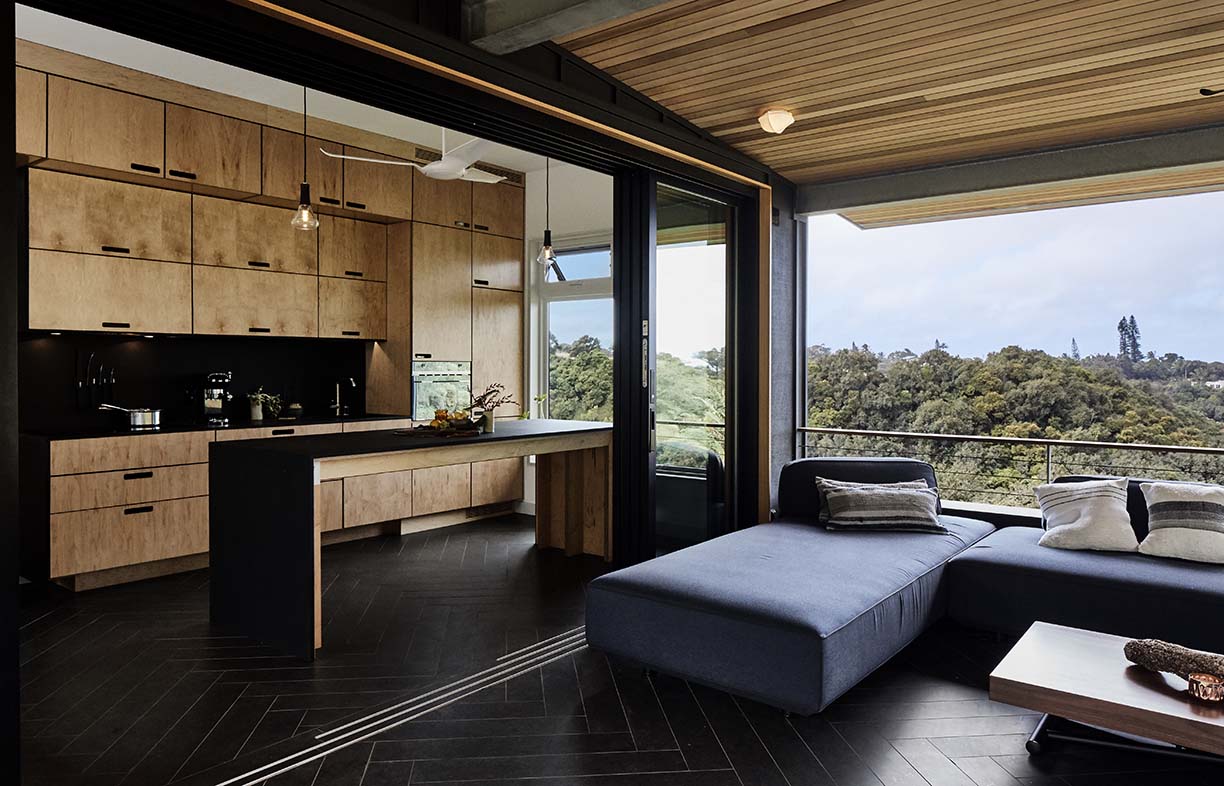 As you’d expect in a carefully thought out small home, storage is incorporated wherever possible – especially in the kitchen. The tiled floor here continues to the lanai, the covered outside living space that is the heart of the house. 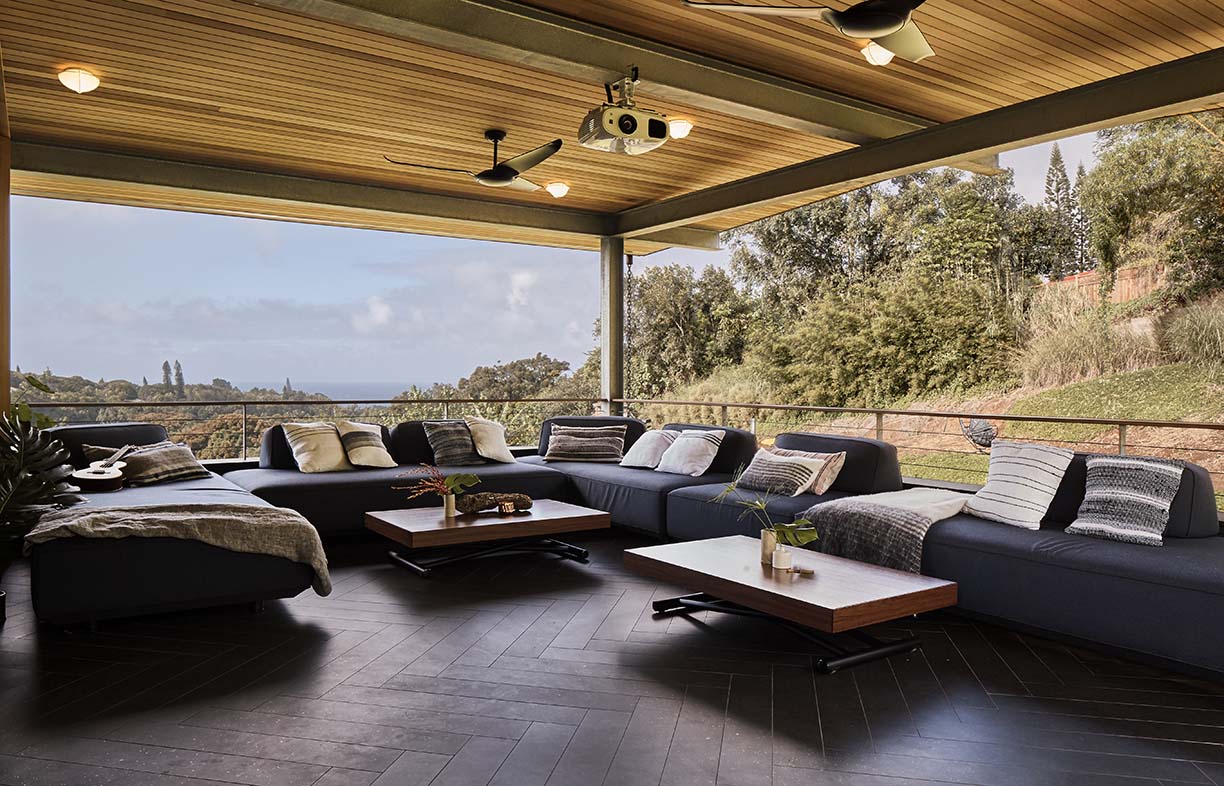 Adjustable-height tables and modular furniture make the lanai very versatile: it can accommodate up to 20 people for relaxing or for a meal.

Along with clever use of space, Graham was keen to make the build “very green”. “We recycled the beginning of a house that was already on the site,” he says, “keeping the retaining wall and polishing the existing concrete slab for the lower level garage.” The structure is galvanised steel I-beams infilled with timber framing, clad with plywood. “I like the efficiency of board and batten for cladding. It’s the simplest, cheapest thing you can do, but if you detail it nicely, it looks great.”

He took pains with the internal fitout, too. “A really good small space has to have nice design, nice materials, and be peaceful and quiet – just to feel right,” he explains. “It’s important to me to address acoustics.” In the bedrooms, he specified two layers of insulation and two of plasterboard, with Green Glue, an acoustic dampening product, in between layers. There is great cross ventilation and ceiling fans in all the rooms, but the three smaller bedrooms also feature extractor fans in the ceiling “so that you can shut the door and still have ventilation – important for privacy and comfort.” 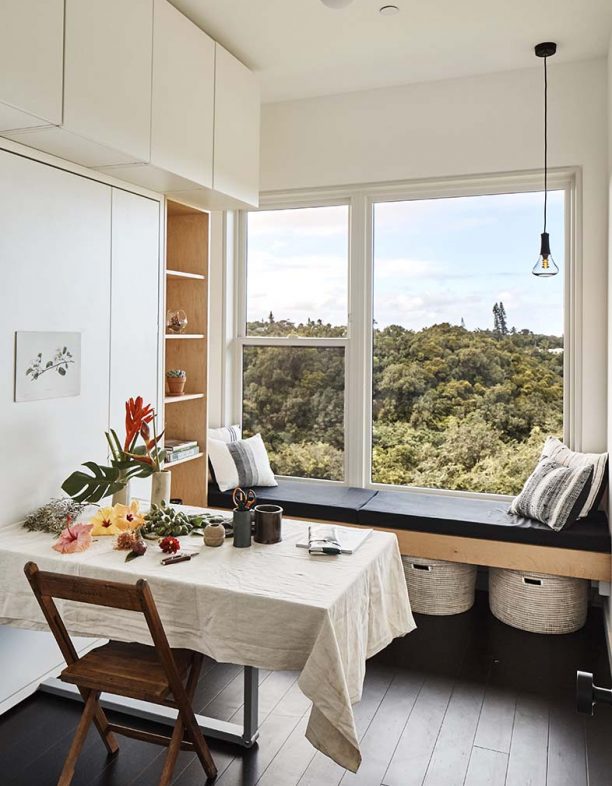 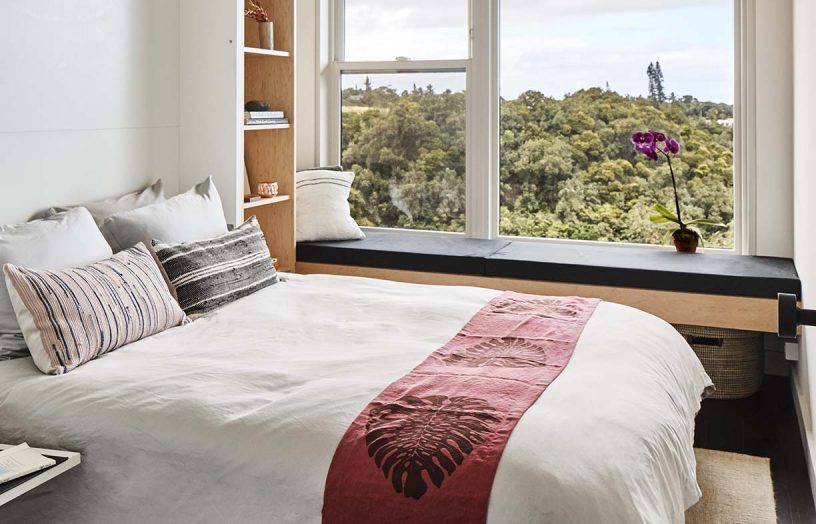 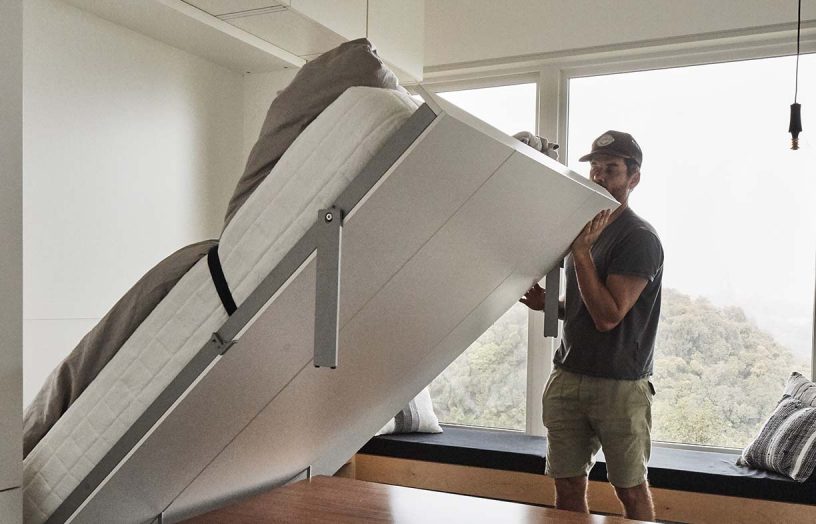 The small bedrooms are made multi-functional using ingenious fold-away Murphy wall beds from Resource Furniture, including bunks in the easternmost room. Tables and desks rise into place when the beds are put away.

There is no active heating in the house – it’s not needed in this climate – and no air conditioning either; 1.8 metre roof overhangs on all sides keep rain and sun out. The roof hosts a solar hot water system and 10.5kW of thin-film solar panels that are glued in between the standing seams; these, along with the Blue Ion 2.0 energy storage system in the garage, 75,000 litres of rainwater storage and a leach field for waste water treatment, allow the house to be entirely off-grid. The solar is also used to charge Graham’s beloved 1973 Volkswagen ‘Thing’, that has been converted to an electric vehicle.

Built as Graham’s base when he’s in Maui, the house is also likely to fulfil an important educational purpose via being rented out as short term accommodation. “From a ‘mission’ perspective, getting as many people as possible through the place to experience comfortable, flexible, small-space, off-grid living is the hope,” says Graham.