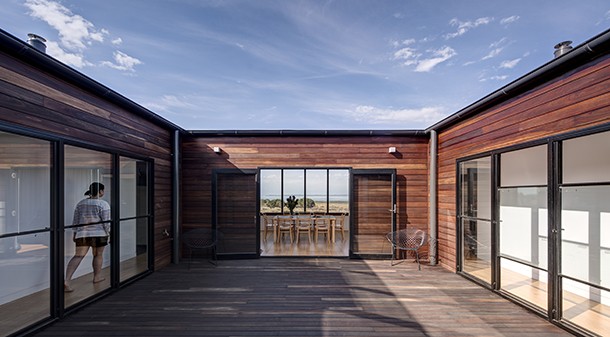 Instead of verandahs, an open-air deck at the heart of the home provides a protected outdoor space and lets natural light into all of the living spaces; the arrangement provides views outwards to the coast and inwards to the connected courtyard. 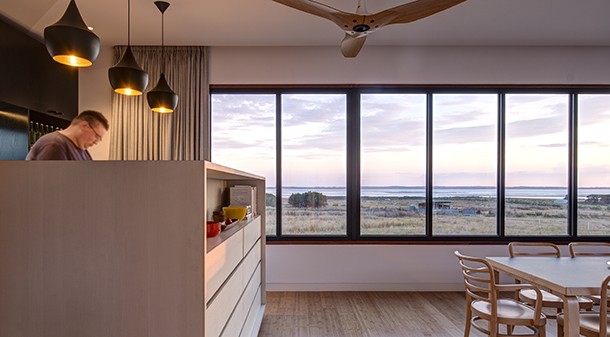 The south-facing double-glazed windows are fixed, and provide stunning views over the bay to Phillip Island. Split system air conditioners in the bedrooms are used for cooling in summer, while fans and selective use of cross breezes are sufficient for cooling the living space. 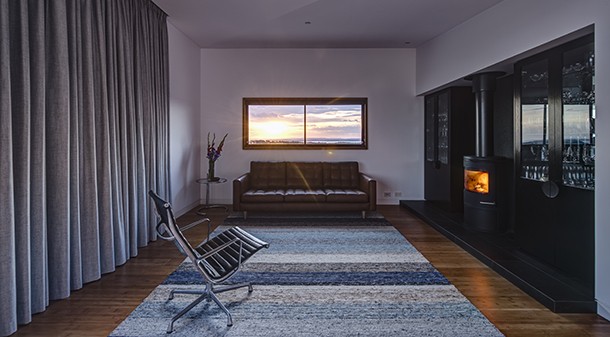 The south-facing, open-plan living room has minimal glazing to the west, and extensive glazing to the south for coastal views. Heavy-duty curtains are used in winter to help retain warmth; and walls, ceilings and floors are filled with insulation. 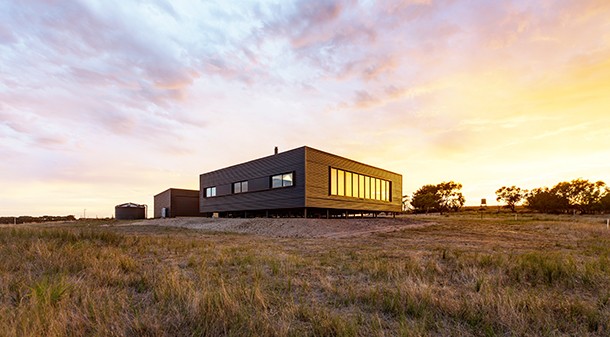 Stunning coastal views make sunrise worth waking up for! The farmhouse is clustered with the water storage and farm shed (which also houses the renewable energy system). Images: Jaime Diaz-Berrio 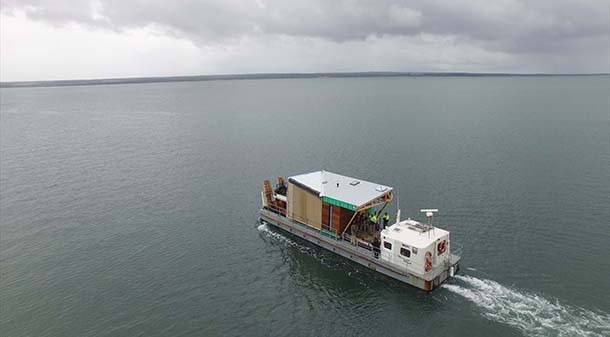 The prefabricated farmhouse was delivered as five modules, and over two days was transported by truck and barge to Helen and Ken’s remote French Island farm. The entire build pivoted on the size and capacity of the barge. 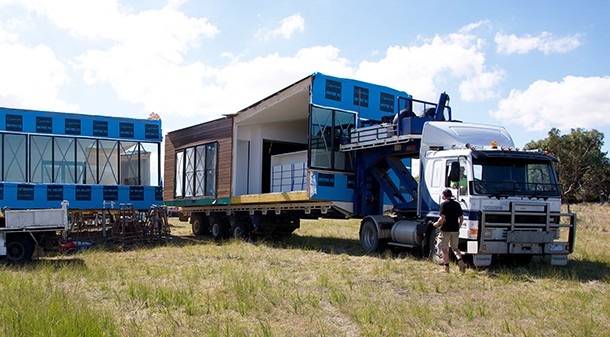 Unable to get a crane on-site, the modules were delivered by truck, backed up and clipped together. They arrived fully prefabricated with joinery, toilets and windows in place.
< 1 / 6 >

Designed to be transportable by truck and barge to French Island – one of Victoria’s most inaccessible places – this prefabricated farmhouse is no ordinary coastal retreat.

When looking only at a map, it’s hard to comprehend the remoteness of Helen and Ken Brown’s farm on French Island.

Located just 60 kilometres from Melbourne’s CBD it looks close, and even has a regular ferry and train service connecting it to the city. But unlike Western Port Bay’s more famous Phillip Island, there is no bridge link to the mainland. If the ferry can’t run, due to weather or maintenance, the island’s tiny community of 116 permanent residents can be isolated for days, and occasionally weeks at a time.

Add to this the reality of no local government or rubbish collection, no town water or power supply, and one general store, and it starts to make sense why it’s sometimes referred to as Victoria’s ‘forgotten’ island.

“It’s Australia’s remotest place within an hour’s drive of a major city,” laughs Helen, who bought the 43-hectare property on a whim decades ago, when the lot was part of a series of ‘fire sale’ auctions.

Half the island is national park and over the years they’ve camped on the property and spent time revegetating wildlife corridors with Landcare grants. They always nurtured the idea of building and living there permanently, and the right time arrived with retirement. “We wanted a change of lifestyle, a much more active one,” says Ken. They engaged Lai Cheong Brown – the architectural practice of their son Rowan and daughter-in-law Christina – to design their new home and manage the build.

It was clear from the beginning the project was going to be a challenging one. The house needed to be practical for a working farm, off-grid, suitable for retirement and flexible enough to cater for regular visitors who might become stranded. The site is exposed to winds from every direction and the views, although magnificent, are to the south. But most difficult of all was access: “Everything has to be brought over by barge from Corinella or on the passenger ferry from Stony Point,” says Rowan, “including houses.” The whole build would pivot on the size and capacity of French Island’s privately operated barge service.

It’s Australia’s remotest place within an hour’s drive of a major city.

After several months investigating alternative approaches, they dismissed a traditional build as cost prohibitive; they couldn’t accommodate builders on the island for months at a time. Instead, they settled on a geometric, modular design that could be prefabricated and delivered.

As luck would have it, the ideal prefabricator – Ecoliv – was located in nearby Wonthaggi and shared a passion for sustainability. “All of our own designs come 7 Star minimum with solar hot water, solar power, water tanks and double glazing as standard inclusions,” says building designer and Ecoliv owner Ashley Beaumont.

Working together, Rowan and Ashley carefully configured Lai Cheong Brown’s design into five transportable modules to fit the precise dimensions of the barge. The modules were designed to be clipped together on-site, requiring only a few weeks of on-site work to connect services.

At 140 square metres the house is modest and has a flexible floor plan. The modules are arranged around a central deck that Rowan says provides year-round relief from the elements. “We needed some protected outdoor space. Even a mild French Island wind is strong!”

The ‘donut’ pattern serves two other functions: it lets natural light into all of the rooms and makes it easy to create two separate bedroom wings that can be zoned. Rowan explains: “Glazing in the corridors is for circulation and to get some moderated north light into the rooms from the courtyard. A couple of doors allow different sections of the house to be closed off when people are not home, which reduces the load on the two heaters.”

Before delivery, each module was fully fitted out in the Ecoliv factory. The bamboo floors were laid, lights hung, and kitchen and bathroom joinery and fittings in place. “We had to leave the cladding off though, to allow us to get more width onto the barge – even down to 20mm was critical,” says Ashley.

With such precision in play, loading the modules from a truck to a moving barge was the most nerve-racking aspect of the entire project. It took two days to deliver all of the modules, and success relied on the inter-generational wisdom of the truck and barge operators. First, a primemover/tractor unit was shipped over on the barge ready to unload the modules, while another truck backed Helen and Ken’s house over the beach and effectively unloaded the trailer and module onto a moving target. “It’s the most difficult and exciting project we’ve been involved with,” says Ashley.

Cost and the unique access constraints led them to opt for a wholly lightweight timber-framed structure: “The fee to get concrete here is more expensive than the concrete itself,” says Ken. To compensate for thermal mass, the roof, wall and floor cavities are filled with insulation and all windows are double-glazed.

“One of the balances was between capturing the views and getting northern light into the house as well,” says Ashley. “If you turned your back on the views it would be a massive mistake, but that made it hard to get to 7 Stars even though we insulated everywhere we could.”

Helen and Ken moved into their house in earnest in September 2015 and have been comfortably producing enough electricity for their needs with their 3kW solar system, but have a generator and gas backup for the inevitable weeks of stormy weather and a house full of guests. “However, it was more about water management than power management,” says Rowan. “If you have to, you can bring a litre of fuel onto the island – but you can’t make it rain more. Fortunately we have 100,000 litres of water storage.”

French Island is a place like no other, but Rowan says the inspired design of Helen and Ken’s house is already generating interest from others with similarly difficult sites and they have had enquiries from people in New Zealand and Tasmania.

Ashley says Ecoliv recently shipped two halves of a prefabricated house over Bass Strait on the Spirit of Tasmania. “Once we managed to tick off the French Island project, we can pretty much do anything.” 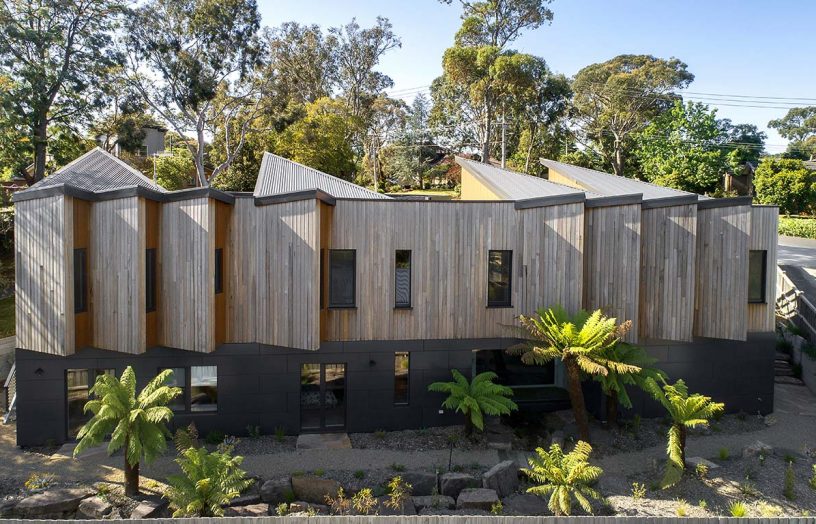 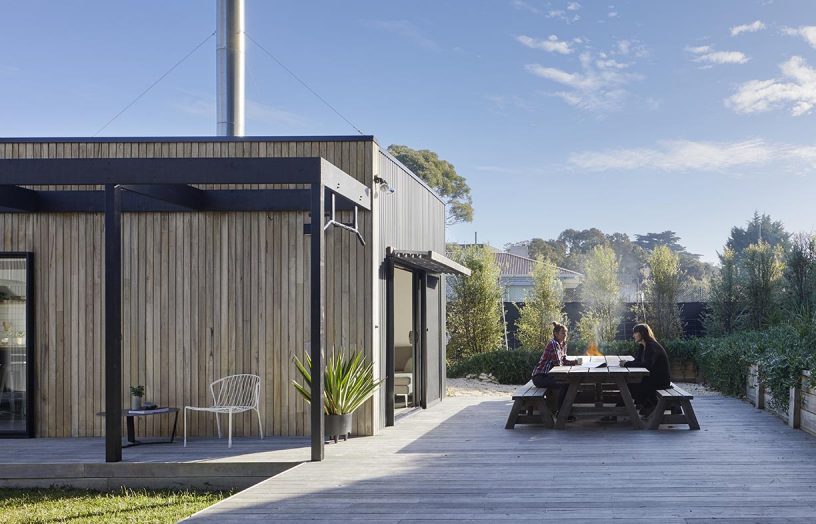 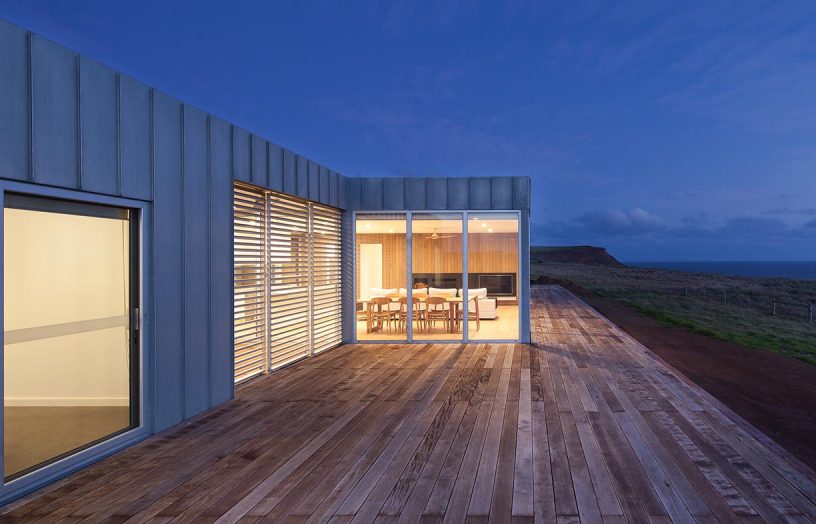 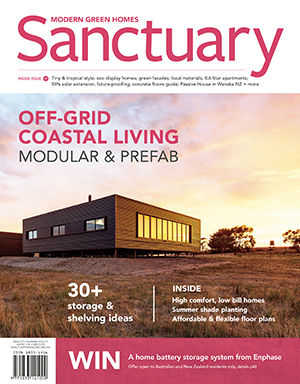