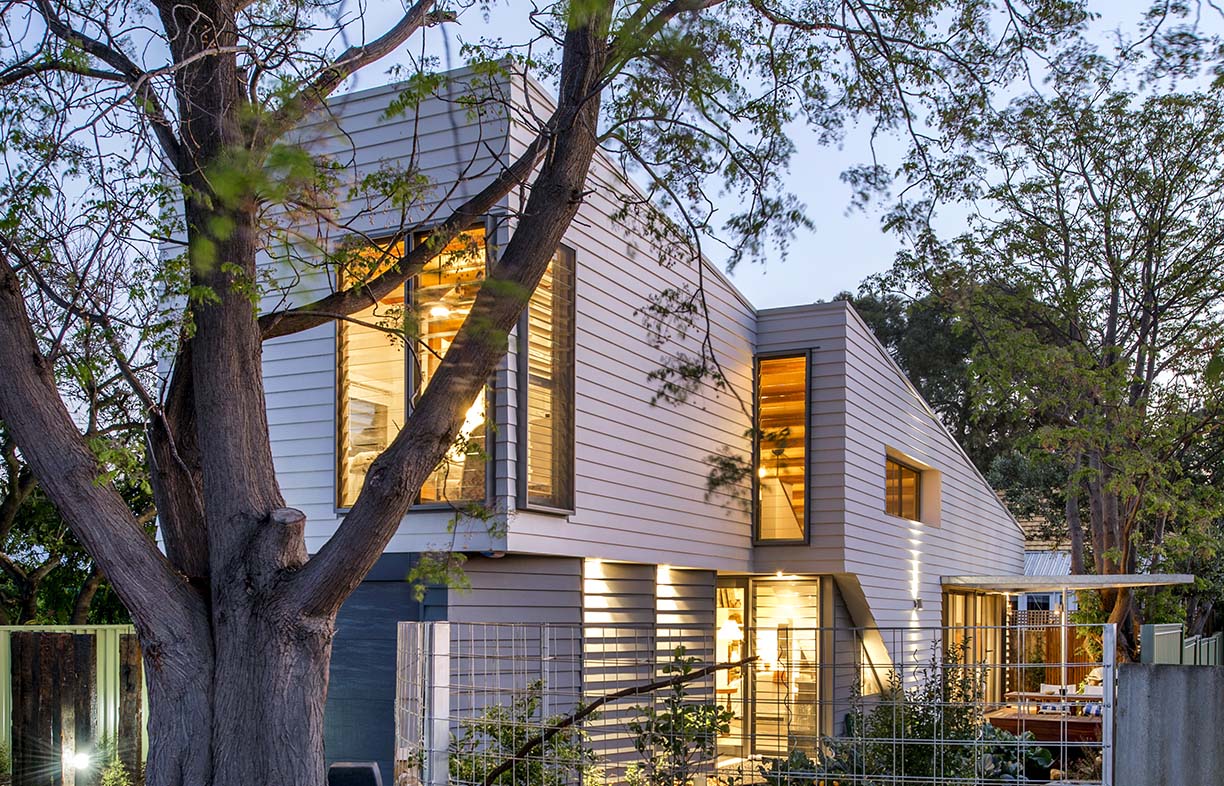 This house in Perth’s inner east – designed by Ben Mountford – provides a sustainable and efficient home for its recently retired owner.

Del is an avid reader and researcher – and member of the ATA – and even though she loved the idea of building her own home from scratch, she hadn’t seriously considered the possibility until she received some positive news from a real estate agent.

“I loved reading Not So Big House by Sarah Susanka and listening to [the late] Alan Saunders on Radio National, but I never dreamed I’d be able to build a house myself,” she says. “I lived in a townhouse in East Perth, and when I had that place valued and realised I could sell it and build my own house, I saw this as an opportunity to put a lot of the information I’d read into action.”

She bought a 295 square metre site in Maylands that had been subdivided from a backyard, but had its own street frontage, and boasted two large established trees. She engaged Ben Mountford – who had done some small alterations to her townhouse – and wrote a 1½ page wishlist. He designed it to be 160 square metres internally and it feels spacious and light-filled, thanks to a long northern orientation and the double-height volume of the main living area.

Ben designed the house with interactive 3D software which helped Del to visualise the various rooms and how they connected (there are no hallways or dead circulation spaces, which helped to keep costs down). “We use 3D tools on all of our projects, because we find that we can’t explain quickly enough all of the opportunities of a particular site without it,” Ben says.

The 3D renderings helped Del to make some tough decisions when the first costings came in. She considered reducing the ceiling height over the living room at that point, but opted to stick with the original plan, a decision that has paid handsome dividends.

Del wanted a house that would see her through her final years of working remotely, then active retirement, and into old age, so Ben included a bedroom and bathroom on each level to accommodate a future with potentially reduced mobility.

She also wanted to minimise her utility bills in a bid to stabilise future outgoings, so Ben employed a ‘fabric first’ approach, where he used first principles to achieve a high performing building envelope. This included orientating the main rooms to the north; incorporating louvres to capture cross-flow breezes for natural cooling; installing large fans to eliminate the need for air conditioning; providing thermal mass in the floors for winter warmth; and using lightweight construction with a gently sloping roof to maximise rainwater capture. 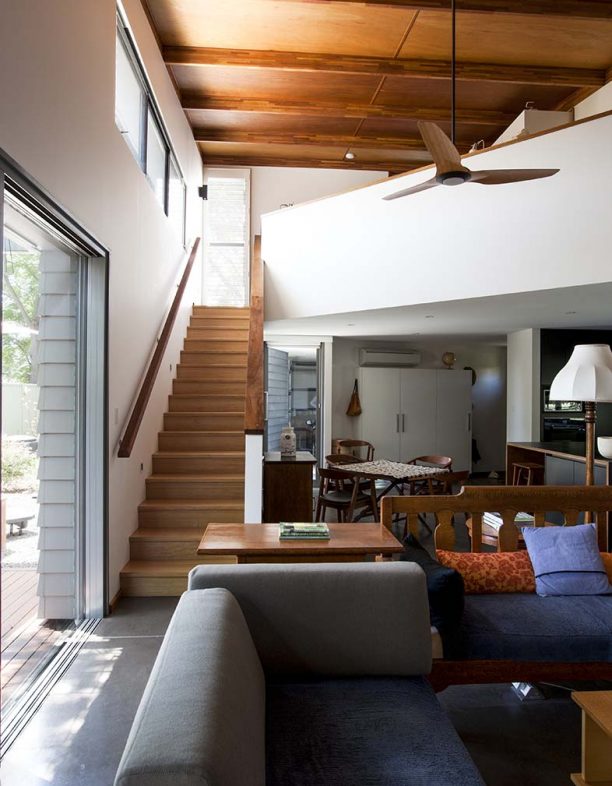 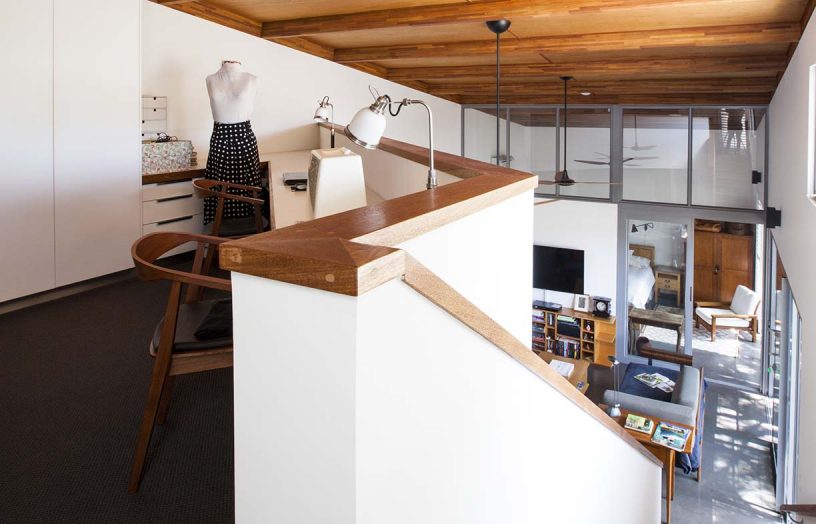 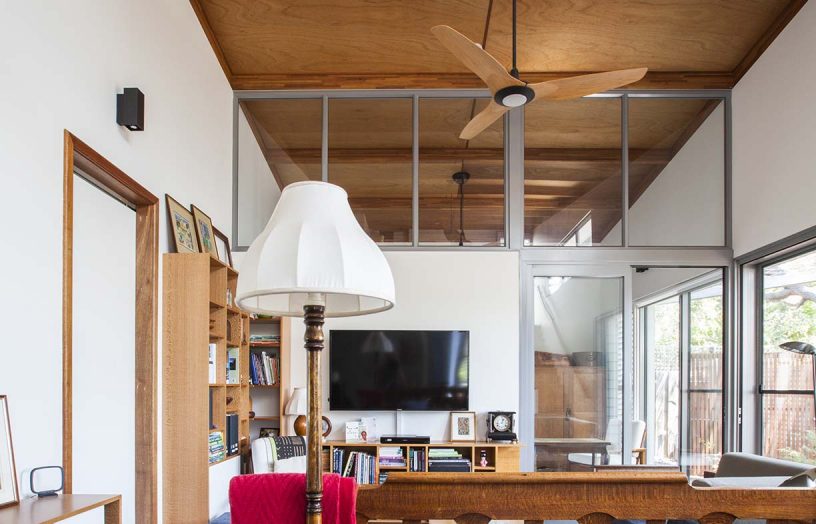 Left: The house opens to a deck and the productive garden that provides a substantial proportion of the owner’s food. Top right: The mezzanine-level study is designed as a multi-purpose area and currently used for sewing. Bottom right: A mostly glazed wall separates the lower bedroom from the living space – a neat trick to maintain visual connection and privacy.

Del pushed the envelope in terms of introducing Ben to greywater recycling systems (to water the garden), and she also installed photovoltaic panels for electricity production, solar hot water, and a 5000-litre tank which collects rainwater for use in toilets and the laundry. A dedicated storage space will accommodate the batteries that Del plans to install in the next few years.

Once the plans were finalised, Del built her own cardboard model from Ben’s drawings to observe how the house would respond to different seasons and times of day, by shining a torchlight through various windows to understand the play of light. She also referred to Ben’s solar modelling, which ensured the house was ideally sited on the block, between two deciduous trees that provide ample shade in summer.

Ben inserted mockups of Del’s existing furniture into the 3D model – including some items made by her grandfather, and a bookcase that Ben had designed for her previous townhouse – to obtain the correct dimensions for the living space.

With an eye on the budget, client and architect ensured that many of the built elements perform double duty: the kitchen island is slightly wider than usual to accommodate large swathes of cloth for Del’s sewing projects, and the mezzanine desk also doubles as a sewing station. The downstairs bathroom has an extra wide toilet that could easily accommodate a wheelchair, and the shower entry is level with the main floor for easy access. 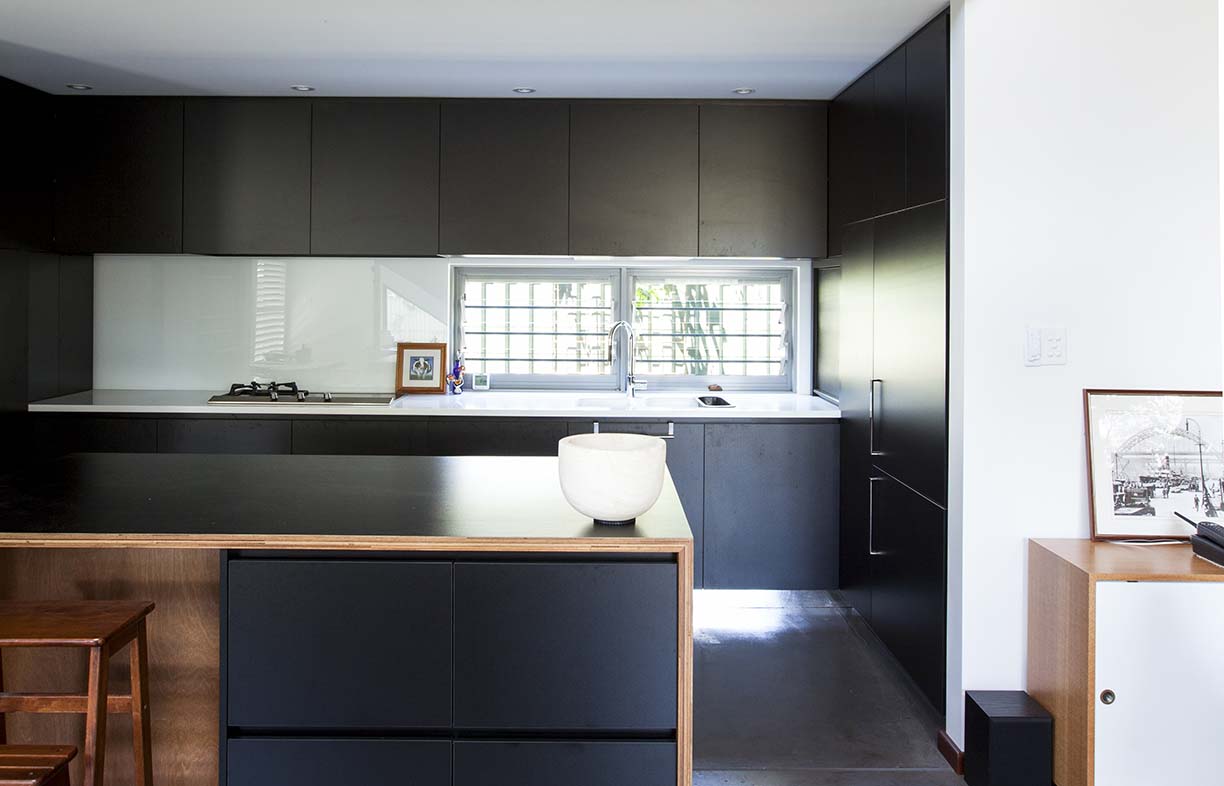 The house is characterised by the use of ‘off the shelf’ materials, such as black laminate plywood for the kitchen joinery. Appliances are efficient and electric, and the fridge is vented to reduce energy consumption.

The use of timber construction techniques – including laminated timber beams and plywood in the living room ceiling, and solid timber doorframes and handles – makes a sentimental connection to Del’s existing furniture and adds warmth to the interiors. Timber and lightweight construction materials also have a lower embodied energy than other materials such as double-brick, which is the norm in Perth.

“It makes sense to build timber houses in Perth especially when you have big trees to provide shade,” Ben says. “If you can maintain the tree cover, you can utilise the canopy for summer shade and in winter when the leaves come off, you get the sun inside. We employ basic low-tech, passive solar common-sense techniques, like not having any windows on the western side, and creating an alley on the northern side of the site, for the garden.”

As well as undertaking extensive research, and being so involved in the design that at one point Ben gave her his own pencil, Del worked on-site as a builder’s labourer – having received the all-clear to do so from the project team – when she was home from her fly-in-fly-out job, and her ‘wages’ were credited to the contract to reduce overall costs.

Now that the house is finished, and she’s retired, she works mainly in her prolific garden, and enjoys regular walks around her new neighbourhood, including to the local shops and library. “I wanted a garden so that I wouldn’t sit inside reading books all day, after I retired,” she laughs.

Having created an ideal home that is incredibly sustainable, comfortable and inviting, Del is keen to share her experience with others. She has opened the doors during Sustainable House Day twice: “I remember when I was looking for ideas, I’d attend Sustainable House Days and people were so generous with their time, and gave me so many ideas,” she says, “and I wanted to pay it back.”