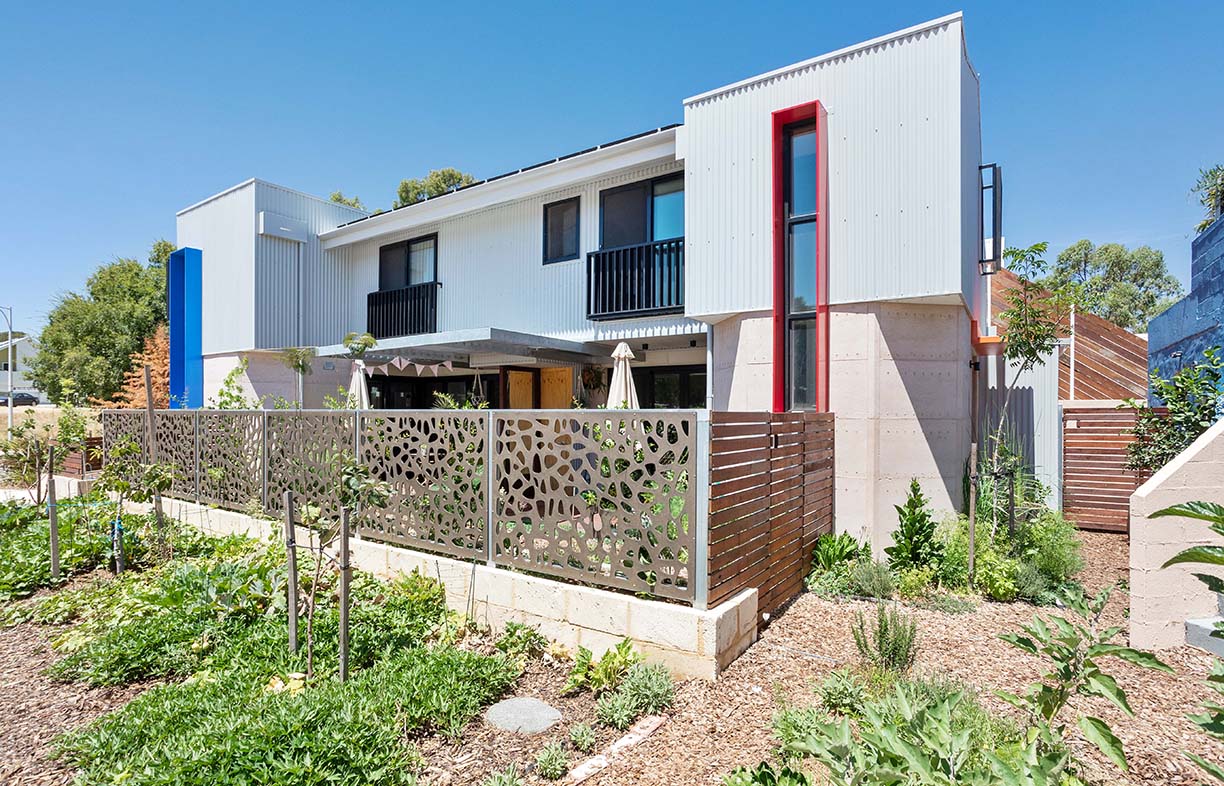 On a north-facing site in Fremantle's White Gum Valley residential precinct, these two double-storey apartments have been designed for best-practice sustainability. A shared garage with a rooftop terrace is tucked at the western end of the block.

Growing up in a town which has since become an outer suburb of Perth provided food for thought for this apartment owner, who used his professional knowledge and skills to demonstrate a sustainable alternative to endless sprawl.

Martin Anda has built his career around research and implementation of new technologies relating to sustainable energy, water management and waste reduction, and his own home puts much of that knowledge and experience to practical use – albeit at a small scale.

It also draws on ancient Indigenous knowledge, which Martin references in his work to create sustainably engineered systems. Before construction commenced, Indigenous elder Marie Taylor performed a smoking ceremony on the site, and the building has been christened Djildjit, the Nyungar word for fish.

Martin and his partner Joanne Wilson have lived in their one-bedroom apartment for just over a year, after he bought the land with friends Andy and Monica Kemp and commissioned architect Richard Hammond to design two apartments. Just 274 square metres in size, the north-facing site is within White Gum Valley (WGV) by Landcorp, a One Planet Living-certified residential precinct in Fremantle.

Richard had designed an earlier house for Martin – also in Fremantle – so the two had a good shared understanding of the local climate and the brief, which revolved around how to incorporate best-practice sustainability into two compact and affordable apartments on a tight site. 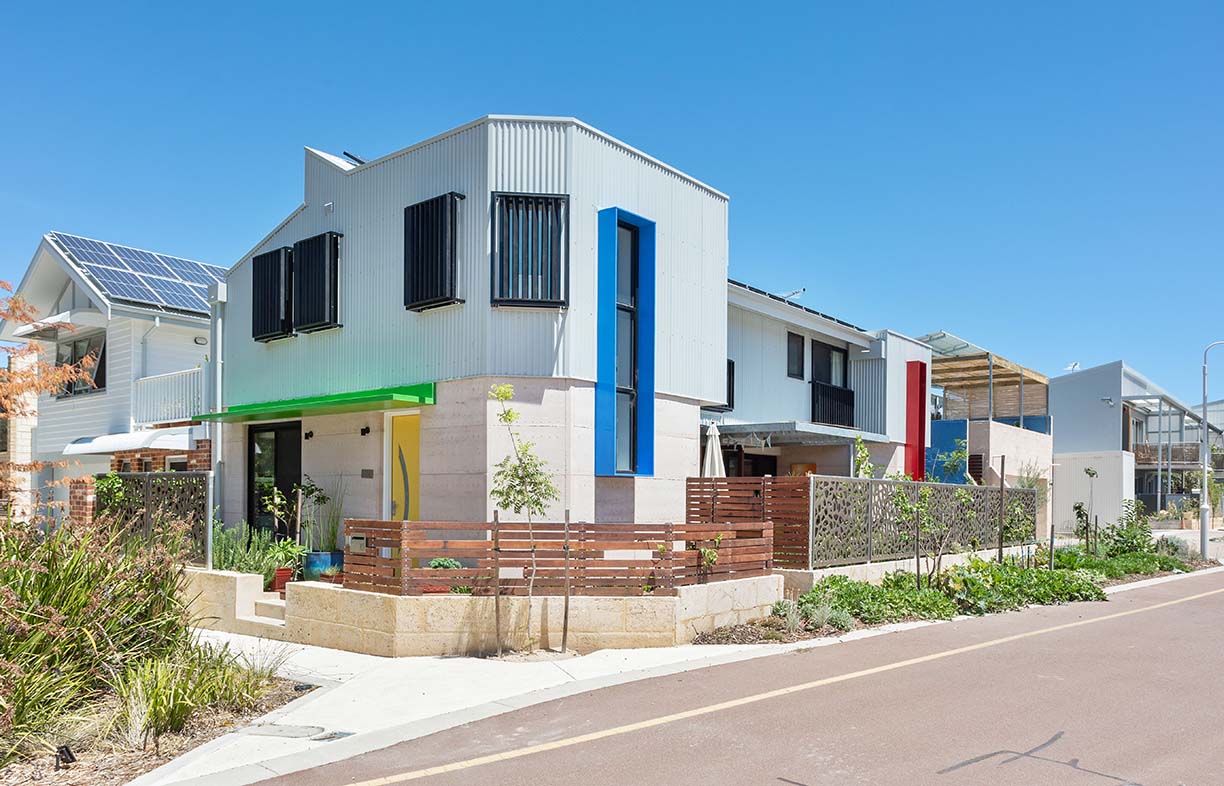 The result is nothing short of spectacular. Martin’s apartment occupies the western end of the two-storey building, and the ground floor comprises a combined kitchen, dining and living space that leads to a sunny timber deck and front garden. The bedroom, walk-in robe and bathroom are upstairs, and there is another toilet and outdoor shower outside, near the drying court. The second apartment is slightly larger, with two bedrooms and a study.

The fact that the site is close to the Fremantle golf course is an added bonus, Martin says. “We walk the dog through there twice a day, and enjoy the massive trees and flocks of birds,” he explains. “It provides an equivalent back-to-nature experience as a walk along the beach.”

Starting from first principles, Richard optimised the apartments’ design for passive solar performance, using many of the tried-and-tested techniques he’s honed over 40 years. “We have a language that we’ve developed over time, which includes a lot of rammed earth buildings,” Richard says. “I’ve also designed three co-housing developments, each with 15 clients, so designing for two clients here was easy by comparison.”

The ground floor is constructed of stabilised rammed earth walls (using 50 per cent construction and demolition waste) and an eco-concrete floor (with 65 per cent less cement than traditional versions), while the first floor and roof consist of a lightweight timber stud frame packed with insulation and clad in lightweight, light-coloured steel. 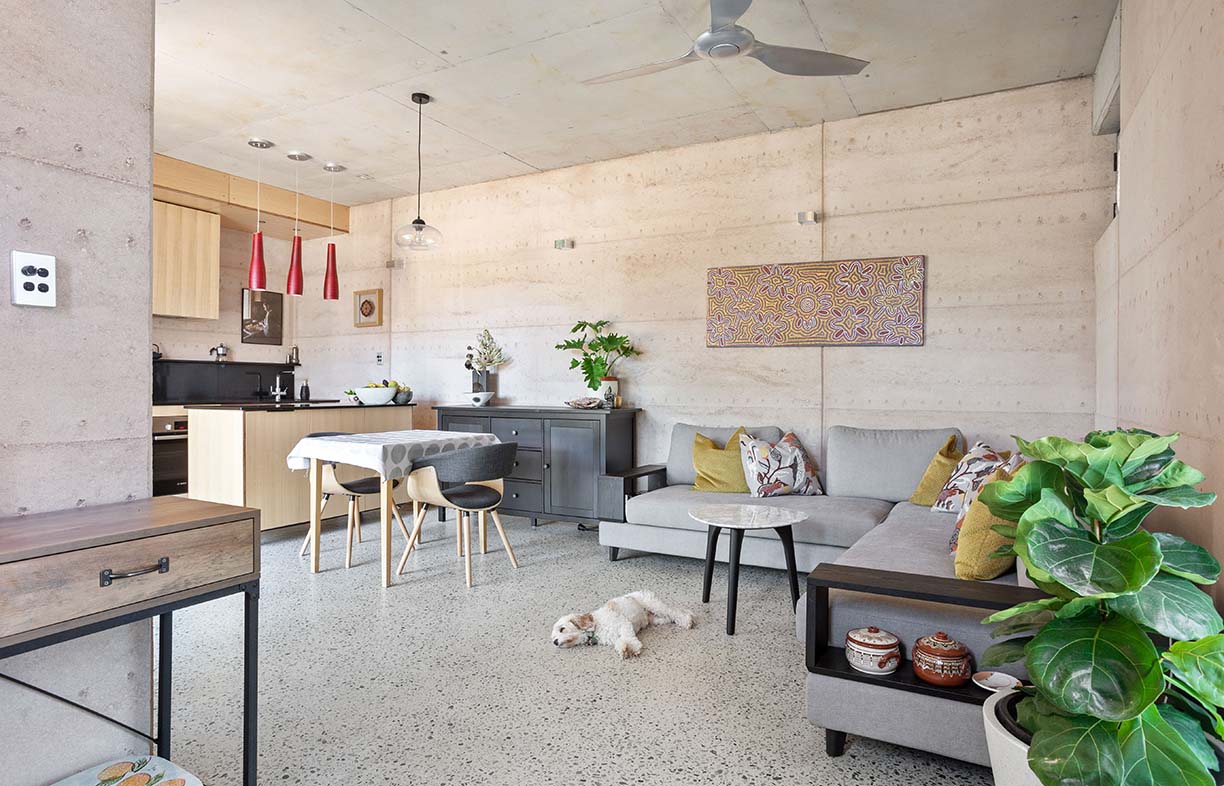 The longest side of the building faces north, flooding all of the rooms with abundant natural light and warmth in winter, and the southern edge is on the boundary, maximising the northern aspect for a productive and attractive food garden as well as outdoor living.

Doors and windows – which are double-glazed to improve thermal and acoustic performance, and sealed to reduce leakage – were positioned to channel prevailing breezes, especially the ‘Freo Doctor’, which blows in from the south-west almost every afternoon in summer. Skylights in the bedrooms that can be opened enhance this crossflow, helping to vent warm air using the chimney effect.

Having determined the passive design attributes, the architect and owners then added a raft of sustainability technologies, including a three-in-one heat pump which provides hot water, heating and cooling; rooftop solar panels for electricity; rainwater collection and storage; and greywater recycling. All of these are shared across the strata-titled apartments, to reduce upfront installation costs and share resources over time.

Other facilities are shared too, such as the double garage, which contains two storage cupboards, a laundry with two washing machines, space for two cars, seven bikes and two kayaks, and a spot for a charging station for electric cars and bikes, should the owners purchase those in the future. 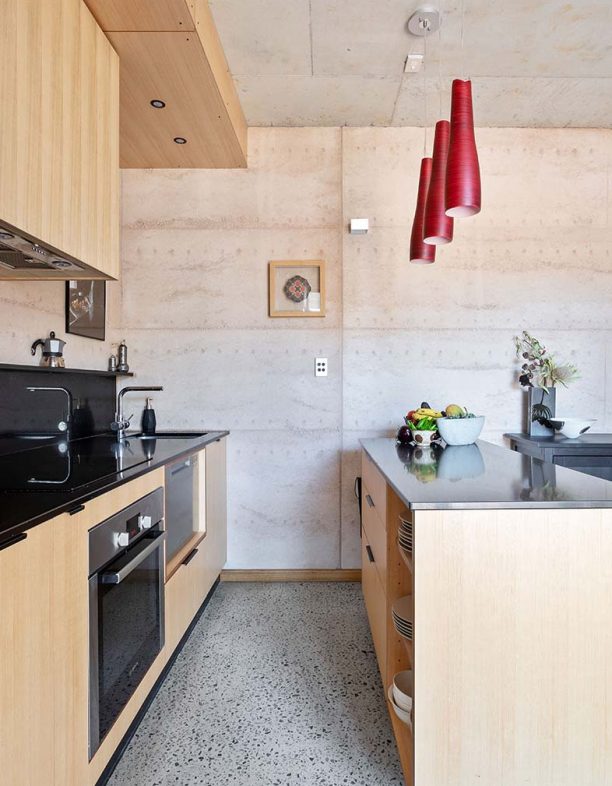 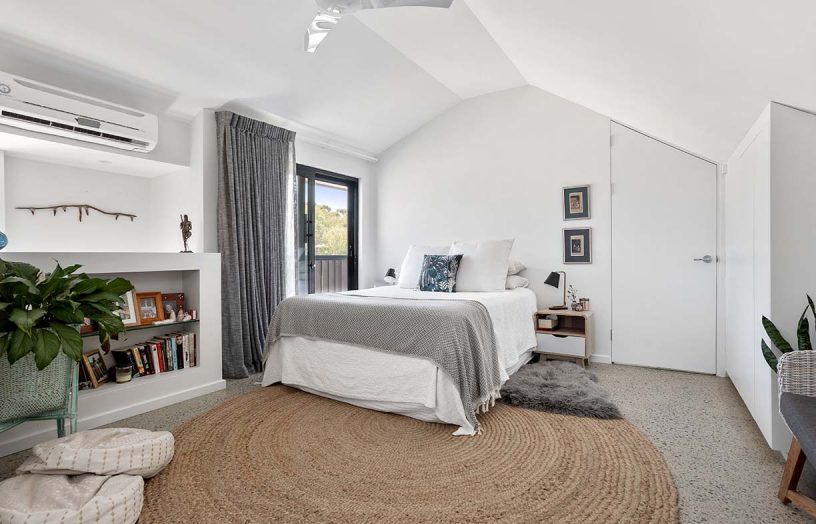 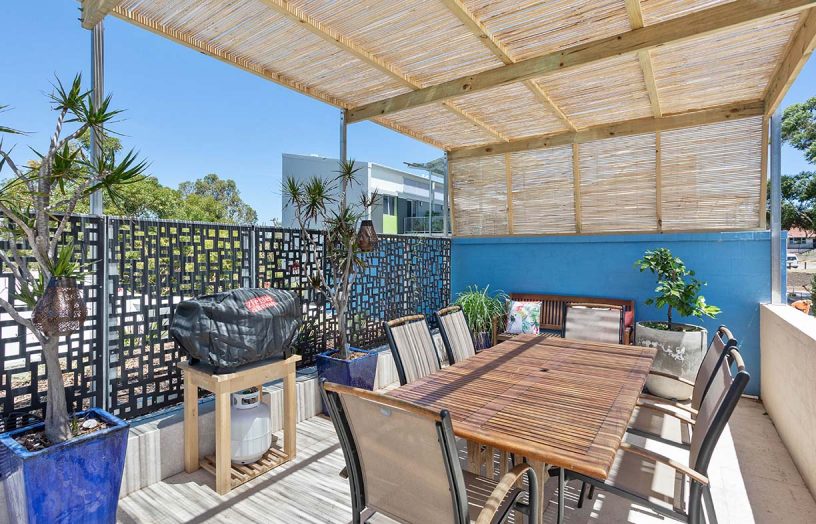 Left: The homes are all-electric, with induction for cooking. Top right: A shared 'three-in-one' heat pump provides hot water, and space heating and cooling via hydronic tubes in the ground floor slab and via a single fan coil unit upstairs in each apartment. Bottom right: Shared facilities, like this entertaining terrace above the garage, allow these two households to make the most of their small site.

Making the most of every last square metre of space on the site, the garage roof is half given over to a roof garden planted with local flora. The other half is a shared covered terrace for entertaining, complete with barbecue and outdoor sink and reminiscent of rooftops in the Mediterranean.

“It wasn’t easy finding the right builder to construct our homes,” says Martin. “Over a number of months the quotes came back far too high. Clearly, these builders were uncertain of the risks involved in our proposed sustainability technology features. Eventually we met with Craig Bailey of Ecovision Homes, who wholeheartedly embraced the sustainability initiatives we wanted out of the project. He even had his own 7 sustainability principles that he applies in his construction projects. The great thing about Craig is that he has a real hands on approach. Not only did he embrace our sustainability goals, he rolled up his sleeves during construction and got his hands dirty on so many days.”

Thanks to Martin’s professional knowledge, the sustainable technologies are wired to a smart home system to optimise the performance of appliances. The heat pump is connected to hydronic pipes in the ground floor concrete slab and, on sunny days when sufficient solar power is being generated, the system runs for four hours to either warm (in winter) or cool (in summer) the slab, turning it into a thermal battery.

“We were able to include a lot of technologies in the build, but we were still on a budget, and batteries are still expensive,” Martin says. “We’d like to be able to run off 100 per cent renewable energy in the future, but in the meantime we have some great workarounds.”

A community bore scheme reticulates groundwater to all homes at WGV for sub-surface irrigation of the apartments’ extensive edible garden. This avoids using drinking quality mains water. The irrigation controller, serving four hydrozones within the garden, is wifi-connected to a weather station to avoid watering when it’s raining.

These energy and water systems will be sub-metered to both apartments, and they have the potential to connect to WGV’s microgrid system in future, allowing the owners to trade energy and water with their neighbours. A trial of this peer-to-peer trading method, called Renew Nexus, was recently completed in Fremantle, and Djildjit was one of the 40 participating households.

Both of the apartments are already capable of connecting to the Internet of Things (IoT), and new technologies will make it possible to further optimise the use of appliances and the performance of energy and water management systems. The planned uptake of real-time monitoring will transform this modest dwelling into a Truly Intelligent Building (TIB) over time.

It’s not all high-tech and bells and whistles though. The garden is one of the best features of this delightful home; it was designed by landscape and sustainability consultant Dr Josh Byrne and his associates. Josh is also an ABC TV presenter and a CRC for Low Carbon Living researcher. The garden encroaches upon the council verge – with permission! – to extend the growing space for food.

Outside the property boundary, four fruit trees – apricot, fig, quince and mulberry – are interspersed among sweet potato crops, seasonal vegetables, salad leaves and herbs, while lemon trees in pots again conjure up a sense of being in Italy. Martin and Joanne eat a mainly plant-based diet with a good amount of their produce home-grown, which helps to cut down on food miles and packaging. And on top of that, all four occupants of the apartments compost their food scraps and other organic waste in two alternating compost bins on site, returning the worm-rich product to the garden.

For Martin, who grew up in Rockingham, 40 kilometres south of Perth, and watched that town become an outlying suburb with the spread of new development – much of it poorly designed for site and climate – this project showcases a better way.

Richard agrees. “This was a single residential site and by using a quirk in the planning system – and good design – we were able to build two apartments here. And the fact that I was working for such an enlightened client made it easy to achieve.”

“This is a great place to live; it performs way better than I thought it would,” Martin says. “In the middle of winter, I have to kick off the covers in bed because it’s so warm inside; it’s brilliant. And in summer, the ceiling fans are all you need in the Perth climate. For me, you just have to build like this.”