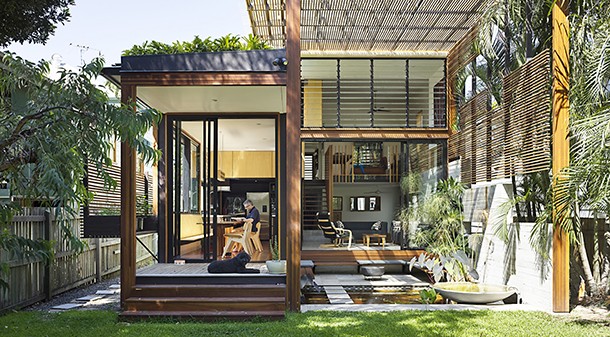 With a green roof, babbling pond and natural connection to the north-east facing backyard, the homeowners now relish downtime at home. 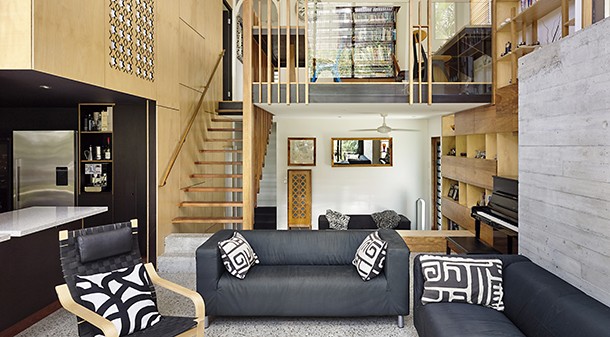 The study, sunken lounge, kitchen and jewellery box-like bedroom above the kitchen all open into the dramatic new double-height living space. The inspired split-level design provides a subtle but effective demarcation of spaces. 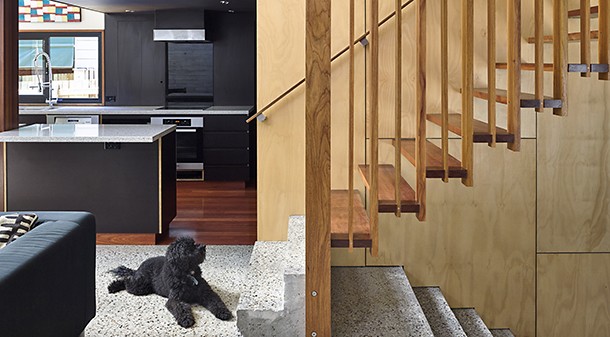 As a change from brightness, the kitchen was made recessive. With a low ceiling height, the dark formply cabinetry and paintwork give it a cave-like contrast to the main living spaces. 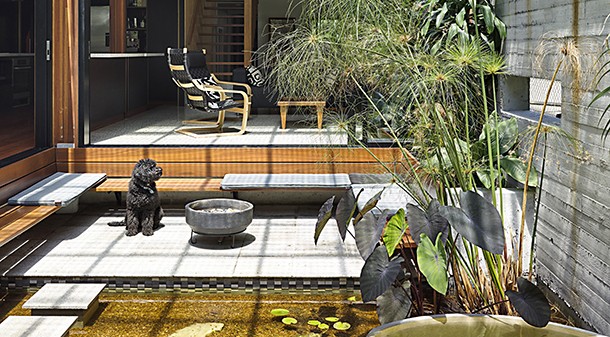 The concrete wall alongside the living area was “one bit of pure vanity but it aids thermal efficiency, buffering the hot afternoon sun and is a good mask of privacy”. Formwork for the wall was reapplied on the outer western face to insulate the thermal mass. 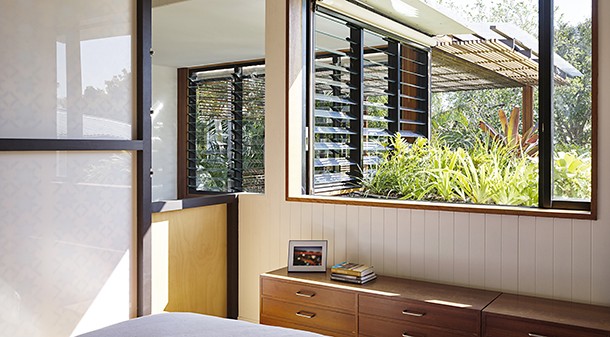 The dining room roof at chest height outside the main bedroom offered the perfect opportunity for a roof garden. The corner of the room hinges open into the double height living space for adjustable light, air and views.
< 1 / 5 >

A subtropical renovation has not only connected a New Farm house with its lush garden but cleverly converted a rarely used swimming pool into a hydronic heating/cooling system.

In 1998, designer Bruce Carrick and architect Caroline Stalker bought an “ugly box” in a great location in Brisbane’s walkable New Farm, a quick cycle from the city. Collaboratively, they have carried out two renovations “on a shoestring” and recently, many years later, have found the time, energy and resources to finally do with the house what they really wanted to.

Caroline had always hated their home’s boxiness with its poor connection to the north-east facing backyard. Their final design emerged after a revelation that the swimming pool, which obstructed the house from the garden, was little-used and no longer needed. They reorganised spaces to bring in “more light, more garden, more openness and coolness,” explains Caroline. The new scheme, adding only 12 square metres, created a garden oasis centred on a babbling pond.

With the new work to the rear, they had to build above the existing levels to account for overland flow; in Brisbane, rain falls in very brief but potentially catastrophic bursts during storms. This constraint resulted in a happy compromise of split level spaces around the new double-height living area, enabling the family to “live very comfortably adjacent in the same space but all using it in a different way”, says Bruce.

Upstairs is the “parents’ zone” where existing openings have been reworked into an open, airy study and master bedroom. The bedroom is compact but exquisitely crafted in timber and ply – light filtering through the starry cut-outs makes it appear like a jewellery box set above the kitchen. Through Caroline’s work on subtropical urbanism, she was keen to ensure that every room had a green connection. “That became a big organising idea,” she said, and with this approach the potentially glary outlook over the chest-height roof in their bedroom became an opportunity. “A classic of how do you turn a handicap into a virtue,” says Bruce. A north-facing roof garden was the solution which brings them daily joy.

Bruce carefully modelled the effectiveness of the building’s layout, cross-ventilation, density of timber screening and position of overhangs.

Downstairs, the cave-like kitchen opens into the living space from where it borrows views and natural light. And recessed under the study is the “boys’ zone” (which was unchanged in this renovation) and a sunken lounge which not only satisfied Caroline’s 70s nostalgia but also her desire for the television to be hidden from view.

Bruce and Caroline chose not to air condition the house. Instead, they pooled their knowledge of passive design and Bruce carefully modelled the effectiveness of the building’s layout, cross-ventilation, density of timber screening and position of overhangs. Rather than fill in the swimming pool, Bruce cleverly repurposed it to act as water storage for a custom-designed hydronic heating and cooling system. It works by pumping cool water from beneath the new suspended pond through the living room slab. Surprisingly for the owners, this system has been most useful in cooler months when it can be solar heated to take the edge off Brisbane’s mild winter, and in summer it works in conjunction with the suspended pond which pre-cools incoming breezes. “We live in the climatic sweet spot for sustainable design so it would be madness if we didn’t try and exploit it. The house performed pretty well during the last punishing summer, and the rest of the year there’s just no need for active systems,” says Caroline.

Towering glazed doors and high-level louvres allow for natural light and ventilation; stunning views are framed by the screened polycarbonate roof, timber battening and vegetation. Translucent polycarbonate allows light to penetrate to the corners of the rooms and through a laser cut plywood screen; it also helps differentiate between the old and new building lines. White-painted plasterboard and VJ boards (tongue and groove) reflect light between the planes of ply and provide space for artwork.

Owner-builder Bruce and a team of skilled friends carefully deconstructed the back of the house in order to salvage as many materials as possible for use in the addition. Crows ash (Australian teak) decking was ripped down for battens, original glass pool fencing forms part of the study balustrade and hardwood framing was reused in the small dining deck. Timber cladding used as formwork for the concrete wall was reapplied as an insulating skin to the outside of the concrete and off-cuts from the build were used for the dining table base. “Taking time to really work everything to the point that you get the most for the least … it has been a lovely thing to do together,” reflects Caroline on the process of disassembling and reassembling their house.

The house is timber framed with plywood used for cladding, linings and cabinetry. Rescued rosewood slabs were crafted into the study balustrade, shelving, cupboard fronts and the dining table. “The whole thing about it being a carbon sink was very attractive,” said Bruce. They also sought “to remove complexity,” and enhance serenity by using a simple palette of materials and precise junctions, made possible thanks to Bruce’s years of experience in furniture making. “If it’s simple, it’s probably better than if it’s complex, even in terms of sustainability.”

The house that Caroline couldn’t bear has become a home that she doesn’t want to leave. “We just dream of weekends where we don’t have to go out because it’s so nice here. It’s now a restorative retreat,” says Caroline. Bruce agrees: “We’ve told people all our lives that architecture can improve your life. It’s great to have it illustrated and confirmed.”