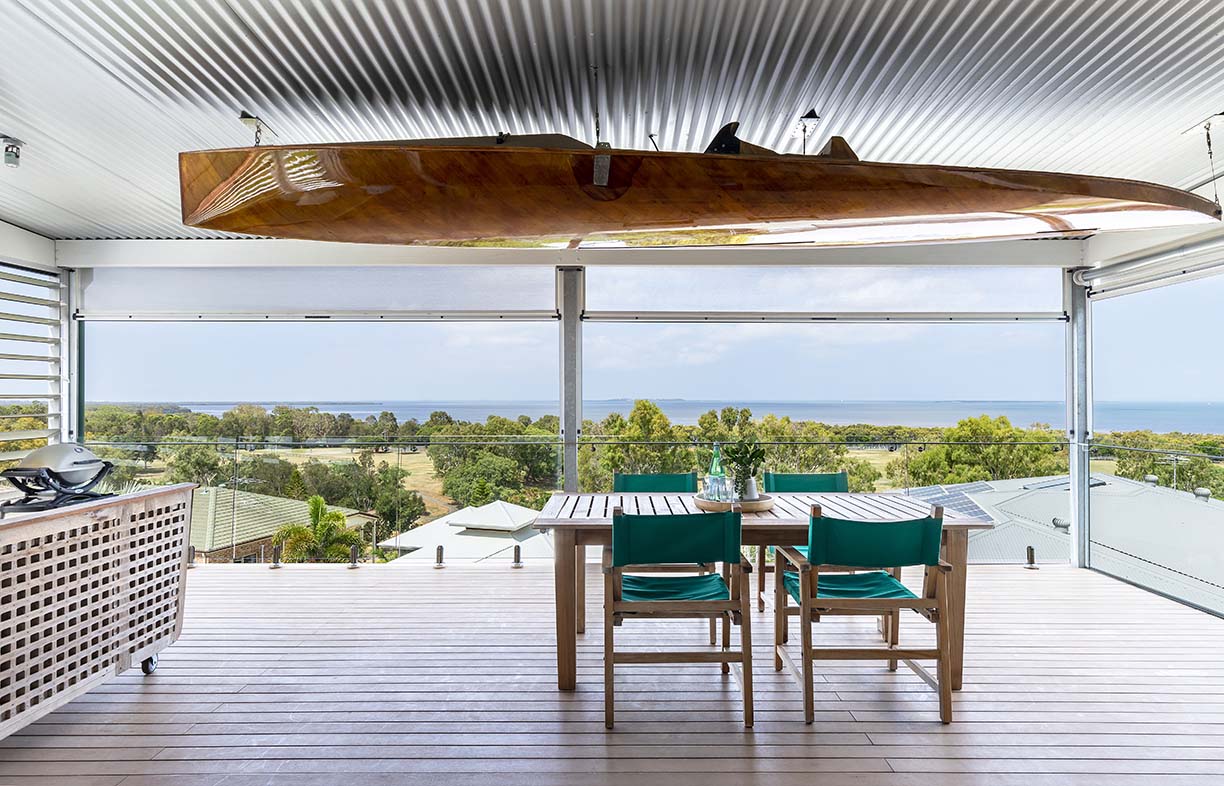 Overlooking Moreton Bay, Ian's house was built in his family boatbuilding workshop, trucked to site and craned into place. It uses innovative structural insulated panels of Ian's own design, made from end-grain balsa wood, flax and bio-epoxy resin. Recycled and responsibly sourced timber is used extensively, and hardware is made from recycled boat fittings.

Innovative eco-friendly composite materials and prefabricated construction are the hallmarks of this airy Queensland home, designed by a master boatbuilder.

Stepping barefoot on the glossy woven flax floor of Ian Wright’s home in Brisbane’s east, it is clear that this is no ordinary build. The first of its kind, it is constructed from composite panels of end-grain balsa wood skinned with flax and zero-VOC bio-epoxy resin. The composite was developed by Ian’s family shipbuilding company (with the help of Gold Coast manufacturer ATL Composites) when Brisbane City Council, their client of 106 years, was considering replacing their monohull ferries with “something greener”, says Ian. While waiting for the council’s decision-making process, Ian tested out the panels for his own house, built in the Wright workshop.

The house stands out from its Wynnum neighbours not only because of its elevated position overlooking Moreton Bay but also for the significant contrast in size. “I don’t get the big house thing. I’m the eccentric guy who lives in the one-bedroom house,” Ian says. At only 76 square metres, it is less than a third of the minimum floor area set by the original covenant (now lapsed) in his subdivision and its lightweight design is far better suited to the subtropical climate than the brick and tile homes surrounding it.

The upper floor is oriented to capture the prevailing north-easterly breezes and expansive sea views. The living space, bathroom, office and bedroom are all sized to fit their purpose like a glove. Large window and door openings admit abundant daylight and winter sunshine and along with the raked zincalume ceiling and large deck, give a generous sense of space. Below, the stairwell anchors the house to the ground between undercroft spaces for car parking and a workshop; there is sufficient height down here to hang Ian’s various smaller boats. 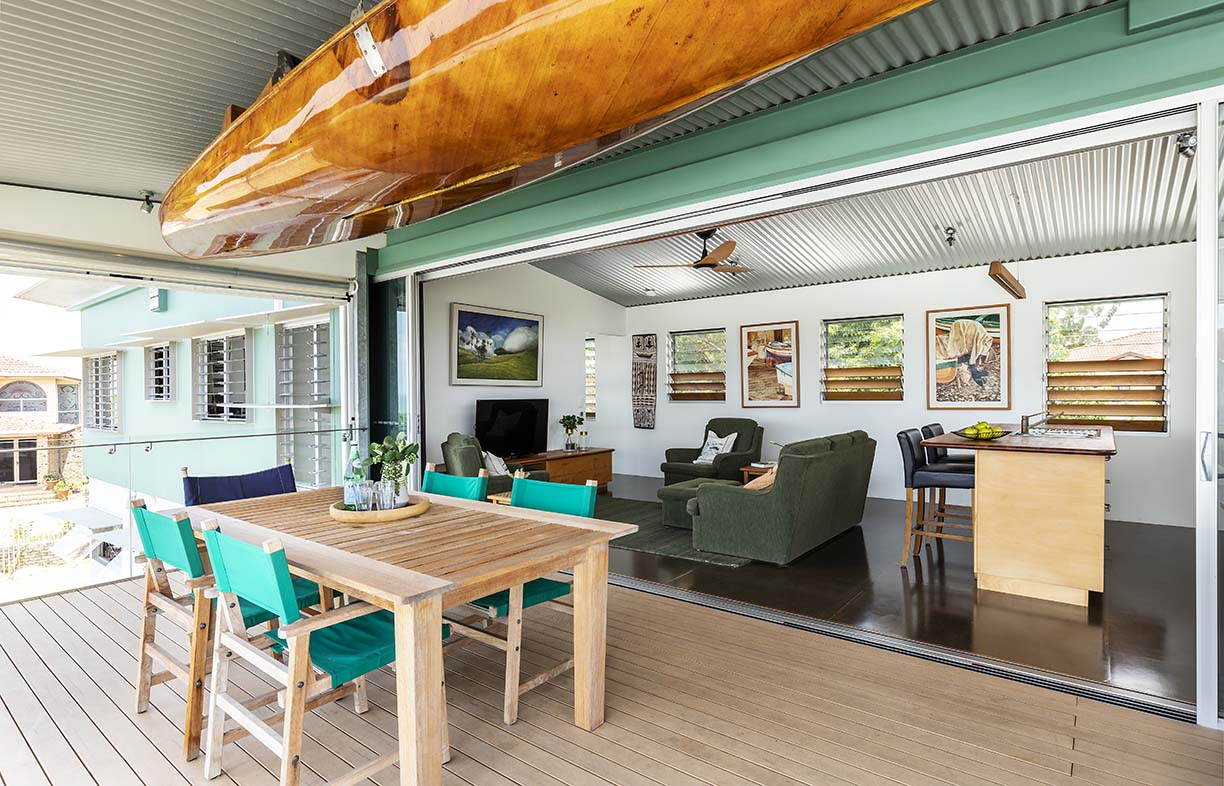 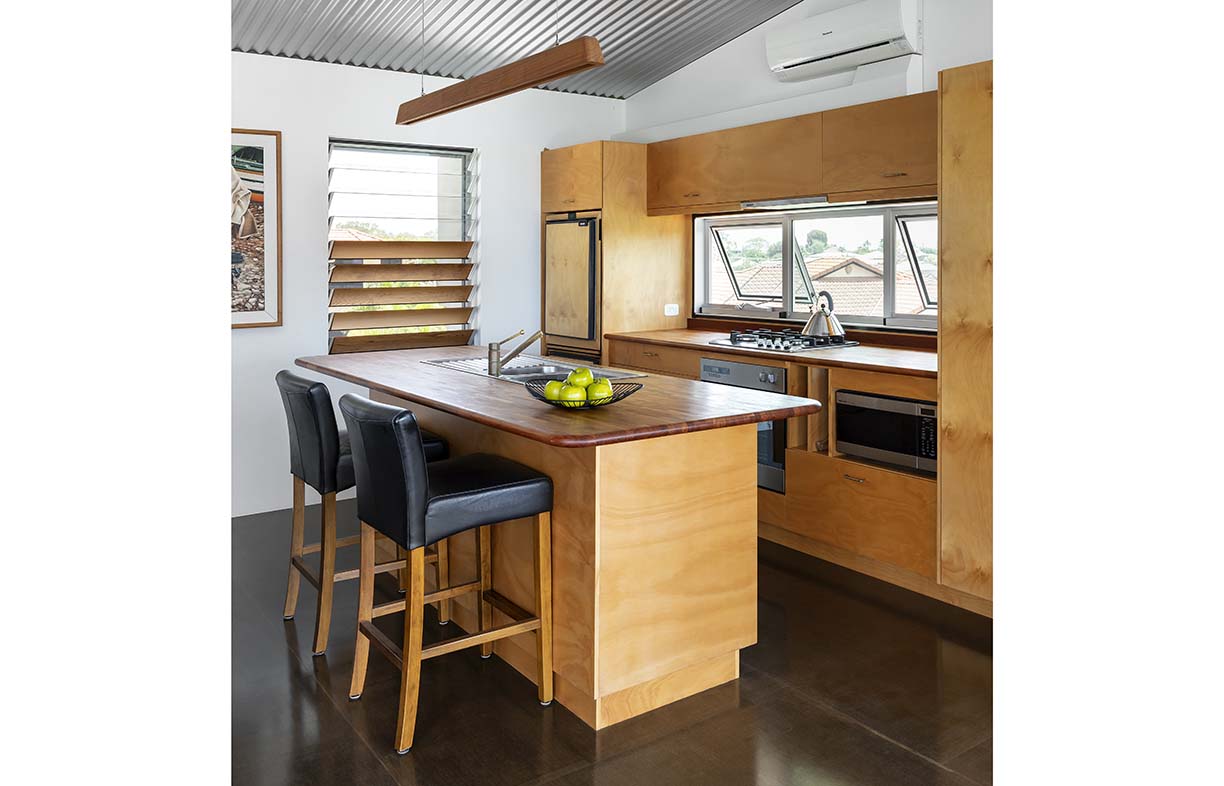 Choosing a new material untested in residential building had its challenges. While the engineer was excited by the deflection strength of the balsa-and-flax panels (particularly their ability to span four by four metres unsupported), the certifier took a lot more convincing. A second certifier was finally won over after a visit to the workshop to see firsthand the impressive strength and engineering of the company’s high-performance boats and witness some rigorous testing of the panels.

The house, stairwell and deck were prefabricated in the boatbuilding workshop. The floor, walls and window awnings are of the composite panels with a laminated timber ring beam around the top and bottom and only three timber bearers supporting the upper floor. The roof was made from Ritek (now ARC Panel) SIPs and fitted in the workshop – a novelty for the roofers who arrived on a “stinking hot day” to discover they’d be working inside a workshop complete with a hoist. “They said they’d come and work for us anytime,” laughs Ian. Along with the prefabrication of the building sections, there was still some conventional building work to do: site works, footings, slab, substructure framing, final connections on site and small areas of traditional carpentry in the lower level framing. Builder Genix Constructions also helped work through some of the compliance issues involved with the composite panels, while they learned how best to work with Ian on his unusual construction method. 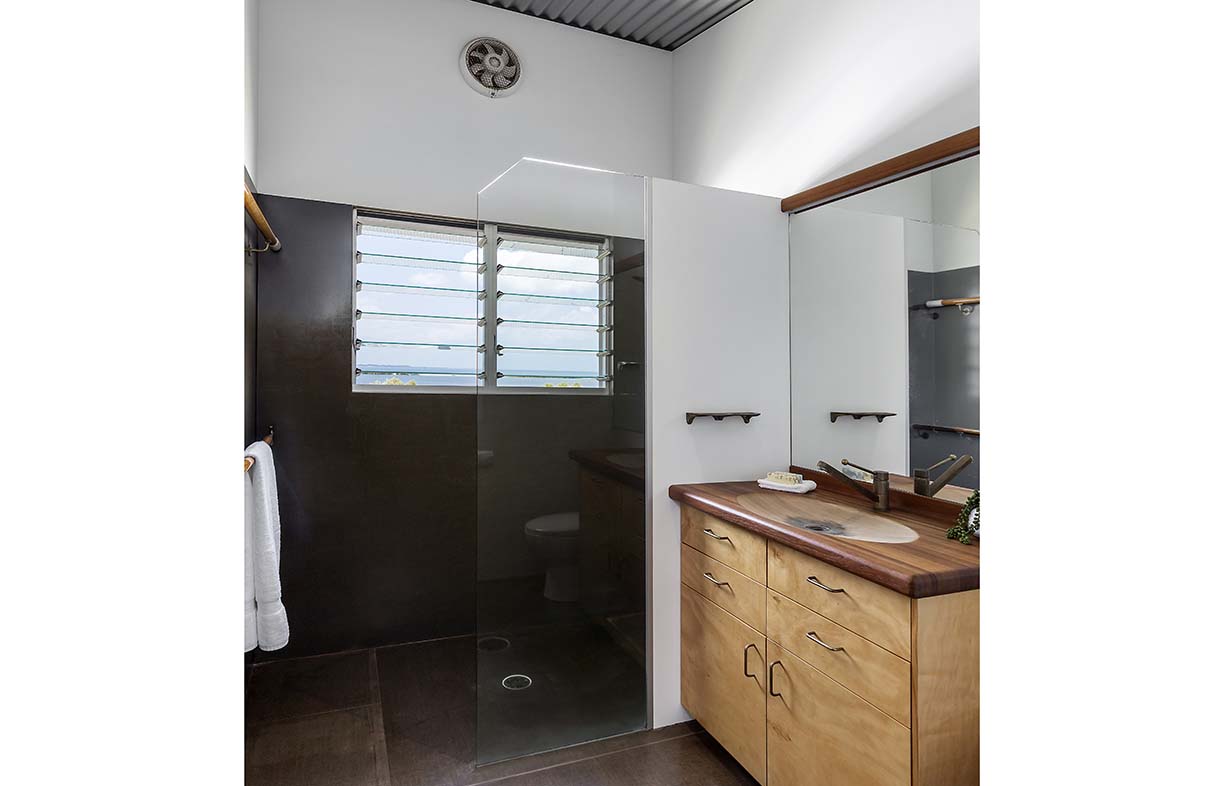 There are no tiles or grout in the house. All floors including the bathroom and shower are clear-finished woven flax.

Assembly on site was a curiosity to the locals. The stairwell arrived first on Ian’s boat trailer. “A week later, the upper floor left the shed at two in the morning to minimise traffic disruption, and we had it craned into place by six,” recalls Ian. The deck arrived soon after. “All the neighbours were out with their chairs and their cups of coffee, watching the entertainment. And we were sitting on the deck drinking beer at four o’clock in the afternoon. It all went pretty smoothly.”

The interiors are elegantly simple, with details in sustainably-sourced timber, plywood and salvaged teak. Finishes are low- or zero-VOC and the bathroom is seamless with no tiles, grout or silicone to harbour moisture and mould. Hardware and tapware is all brass (avoiding chrome plating) unless recycled from previous boat building projects. To finish off, Ian adapted some of his boating memorabilia into fixtures and light fittings.

The roof captures water stored in two tanks totalling 15,000 litres which supply the whole house, leaving the town water connection unused. Greywater from the shower keeps the garden green. There are two separate solar systems: a grid-connected system provides electricity at the standard 240 volts, but Ian also installed a 1 kilowatt system with battery storage that powers a 12 volt circuit to run the home’s LED lighting, fridges and freezer. “We use a lot of 12 volt systems on boats, so I’m familiar with them,” he explains. 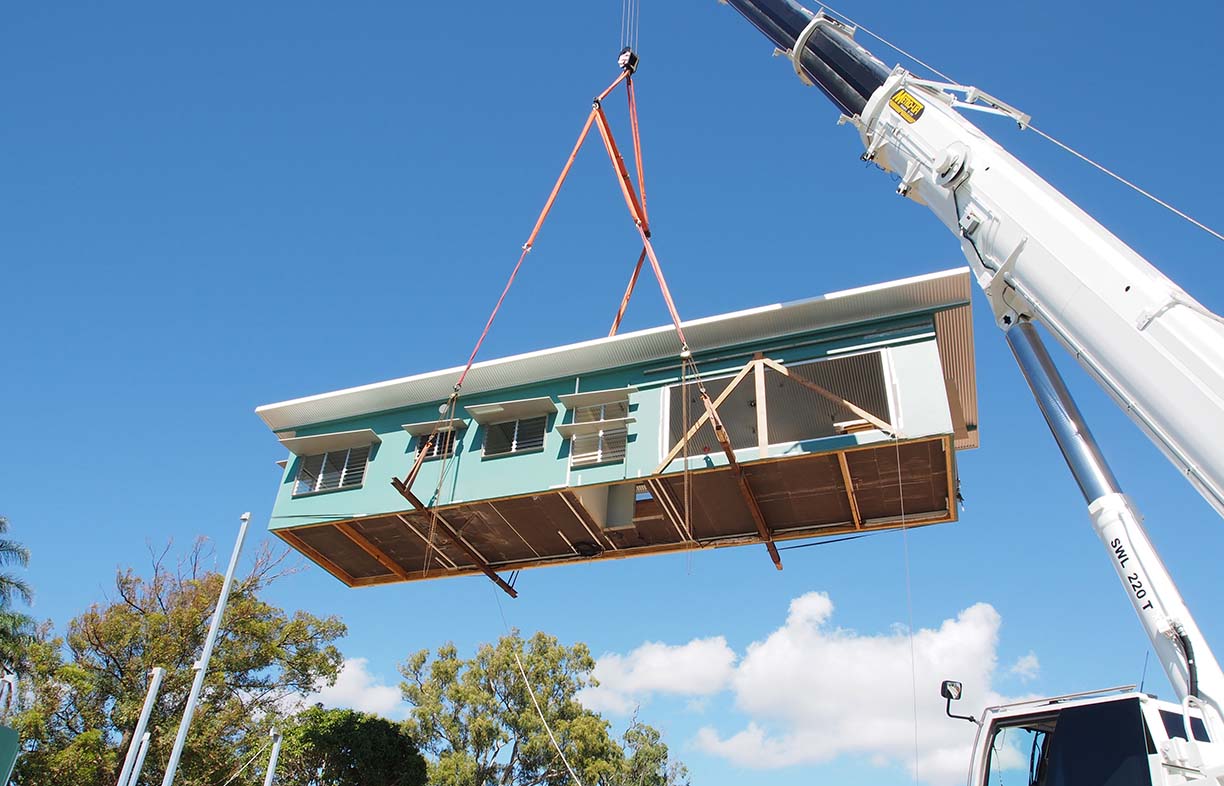 A sailor from childhood, Ian loves the house. “It’s a fabulous place to live,” he says. He operates it like a sailing boat, trimming louvres and doors to adjust the often strong breezes that blow off the bay to get the temperature and ventilation right. “I like that I have to drive the house. I’m in tune with the weather out there.”

The house is a success spatially and climatically, and its unique construction has drawn large crowds when Ian has opened it up for tours. He has had the last laugh with his sceptics. Despite the first certifier’s prediction that it would “fall apart”, the completed house is clearly shipshape and there to stay.