At home with hemp 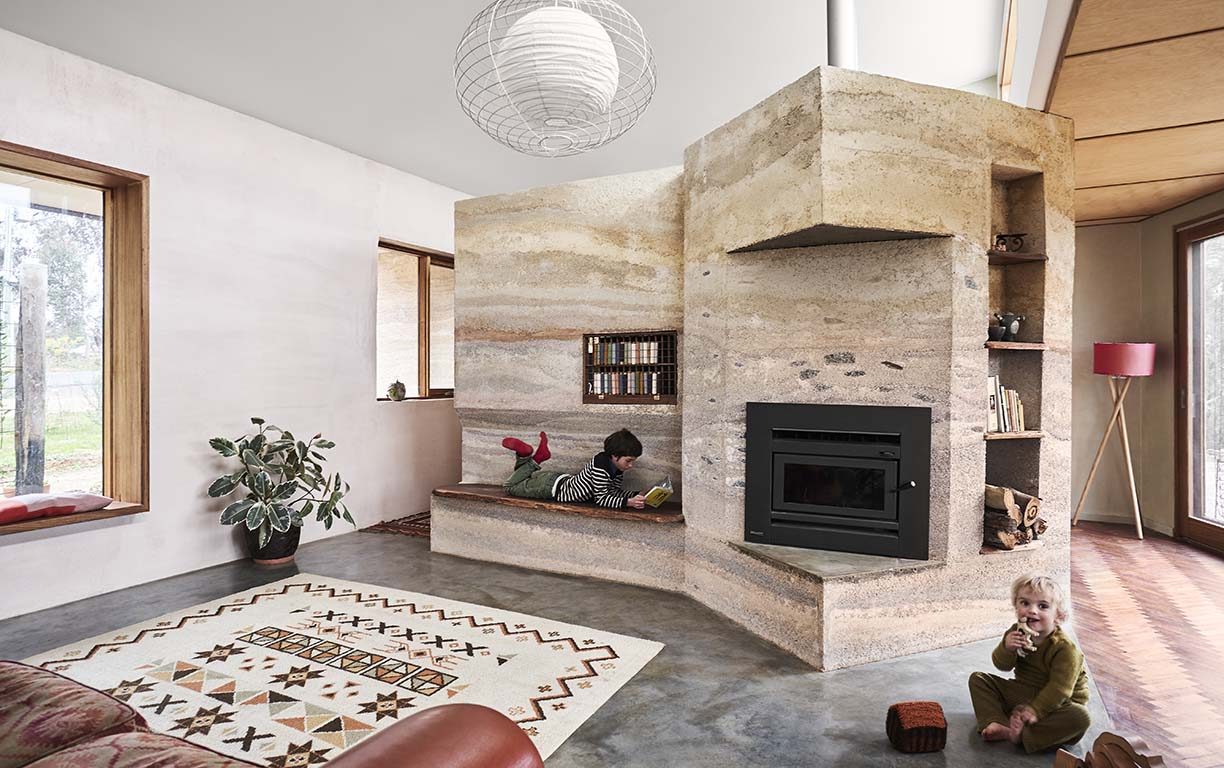 In the centre of the beautiful hempcrete feature wall, a display of yarn spools pivots to allow the screen behind it to be viewed from either the living room or the study, tucked on the other side of the wall. Image: Leon Schoots

This family home in central Victoria makes the most of the beauty and thermal properties of hempcrete, to satisfying effect.

When Brenna Jensen and Dominic Crinson’s house build was underway, prominently positioned on the main road through the hamlet of Chewton near Castlemaine in central Victoria, passing motorists would often stop and wander over, keen to know more about what they were doing.

What was the building material that was being busily mixed, tamped and used to create the walls of the house? Was it rammed earth? “Once or twice we had people who came past and recognised that it was hemp,” Brenna says, “and they were so delighted.”

The signature feature of the Chewton Hemp House, as the couple have called their project, was a work of love for them and their three small sons, friends and other volunteers who built the hempcrete walls over nine months in 2018. The project was a collaboration between the owners and fledgling local design-build business House Workshop, with local cabinetmaker and artist Mark Anstey designing and building the kids’ bedroom and kitchen cabinetry.

The parquet floor in the kitchen was made using salvaged timber offcuts. Deciduous vines will eventually cover the pergola outside for summer shade. Image: Leon Schoots

Facing sweeping bushland at the rear, Brenna and Dominic’s house has a strong presence and sits comfortably in its environment thanks to the unrendered hempcrete walls and weathering steel cladding that echoes the colour of the red ironbark trees that are prominent on the site.

Inside, a short corridor leads to the children’s room, which has a plywood mezzanine where the couple’s sons sleep. Cupboards for toys are cleverly built into the stairs on either side of the room. There’s a tiled bathroom for the children and a laundry on this side of the house.

Walking in the other direction you are greeted by a stunning hempcrete wall enhanced by wavy coloured oxide patterns from the layering process of its creation and the inclusion of earth and other materials in the mixture. The wall acts as a divider, hiding a quiet office space for Dominic away from the hustle of the living room and kitchen. A playful opening in the wall accommodates a feature leadlight window; in another opening around the corner, facing the expansive open plan living and kitchen area, a rack of textile yarn can be swivelled around to reveal a screen for entertainment. A fireplace is set in a third aperture. 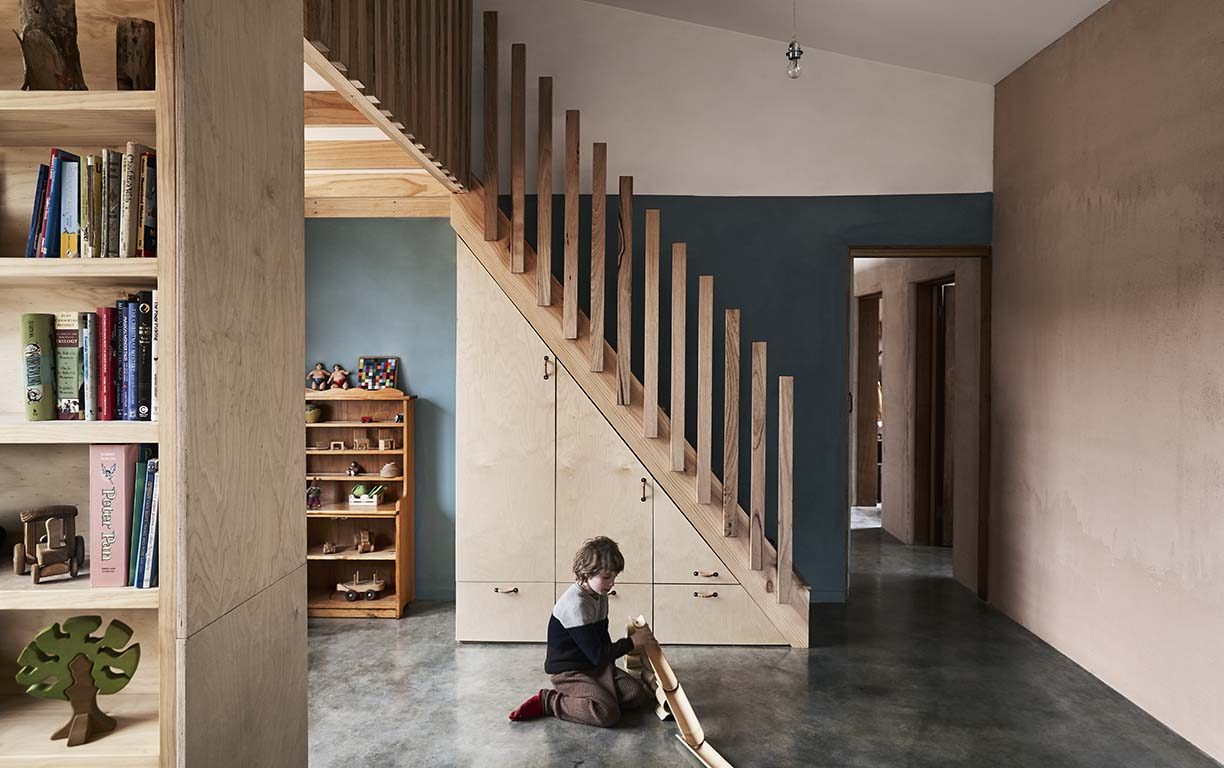 The children’s room features twin staircases against each side wall leading to a sleeping loft above the play space; storage is tucked underneath. The concrete slab floor was burnished and oiled with natural oils. Image: Leon Schoots

The wall defines the internal space and expresses the couple’s livelihoods – Dominic is an artist and Brenna is a textile designer who started a children’s organic merino wool clothing business – as well as their playful creativity. But there’s much more in this part of the house: the north-facing living area is filled with light thanks to clerestory windows and double-glazed hardwood sliding doors that open to views of the bush. Beyond the kitchen is the main bedroom with an ensuite and walk-in robe.

As well as a desire to be actively involved in the design and build of their dream home, the house is defined by the couple’s strong values of environmental sustainability. Hempcrete, a hemp and lime mixture, was chosen as the building material, Dominic explains, because of its strong insulative properties, thermal inertia and ability to regulate internal humidity. “Hemp acts as a carbon sink, absorbing carbon as it grows,” he says. “It’s the best plant you can grow for reducing carbon in the environment. And the finished building will absorb significant amounts of carbon over the next two decades.” 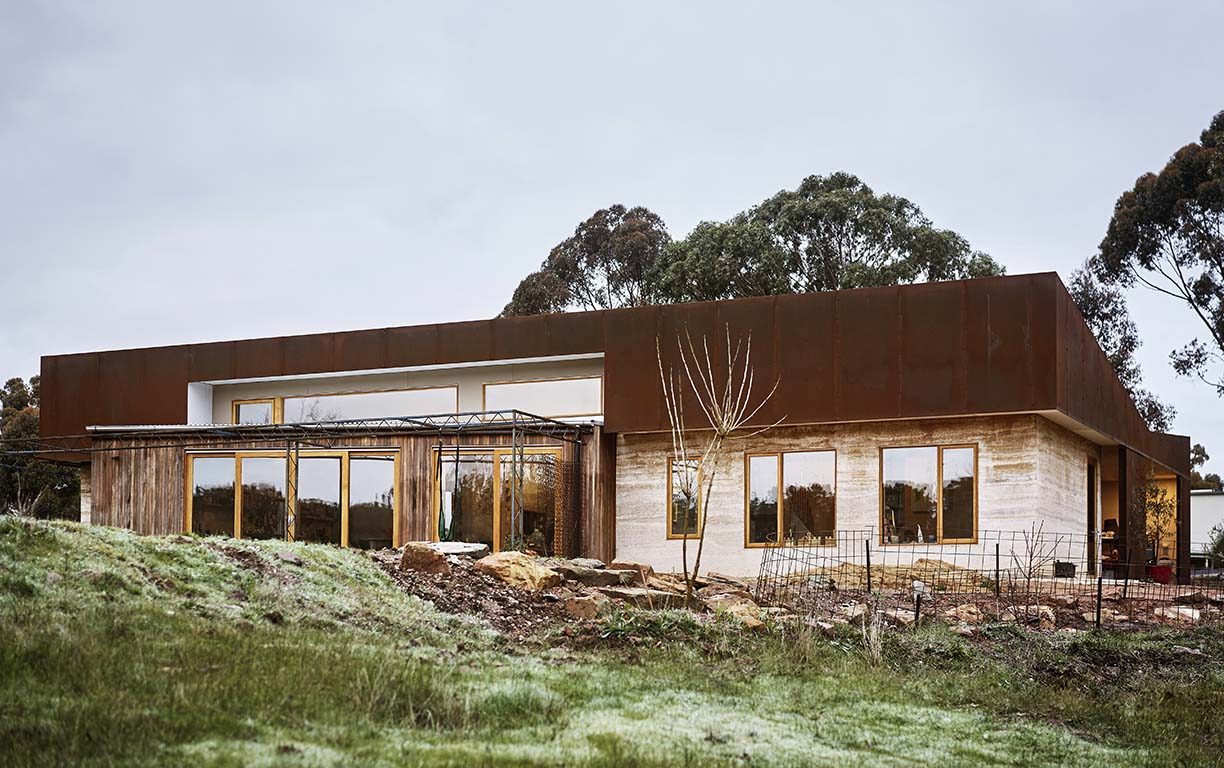 The home is all-electric, with highly efficient appliances including an induction cooktop and hot water heat pump. For a family of five, Dominic says their energy bills have been very low since moving into the house in December 2018. There’s been little use of the fireplace – despite the notably cold weather of a central Victorian winter – thanks to the home’s passive thermal properties, bulk insulation in the ceiling and extensive double glazing.

Water saving comes in the way of a 22,500-litre corrugated steel rainwater tank which is plumbed to feed the house and garden. When the tank is approaching empty, the family switches to town water. There’s also an extensive greywater system that includes swales and reed beds allowing the watering of the family’s newly planted orchard. 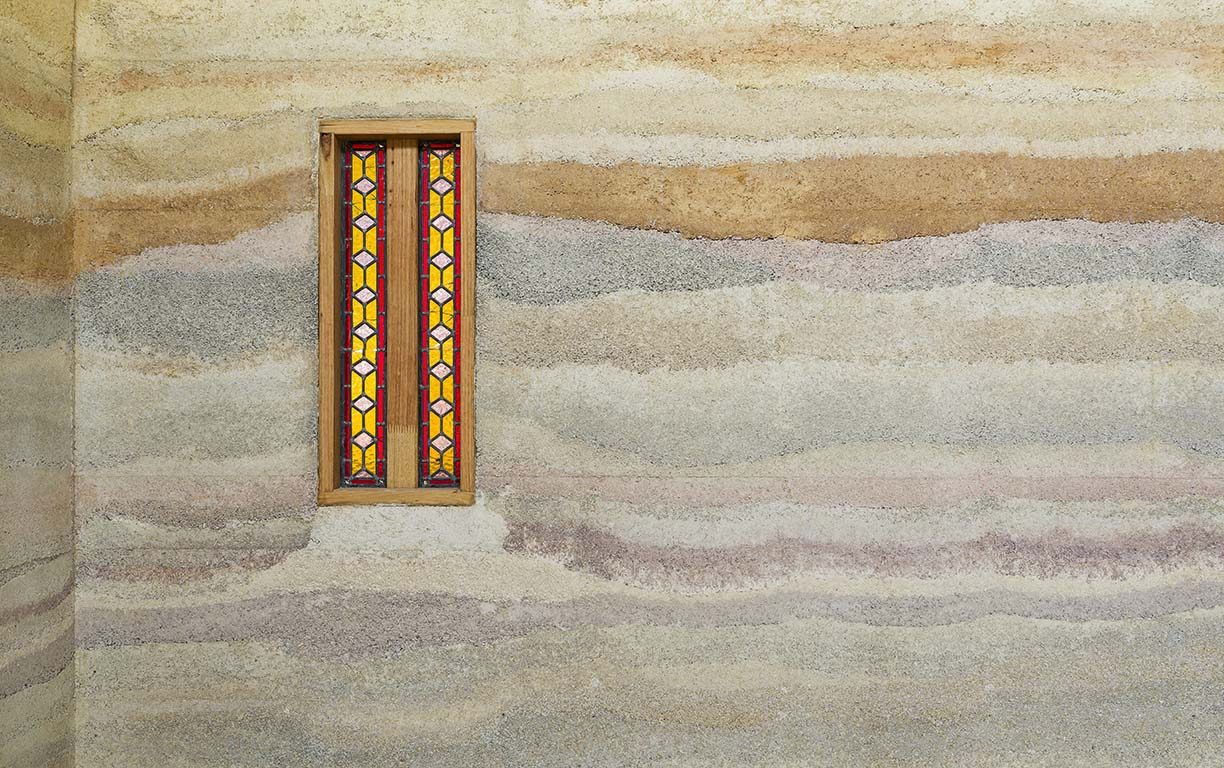 “A good hempcrete wall will be lightly tamped in the centre, and firming up the inner and outer faces helps strengthen the wall,” says homeowner Dominic. “The elimination of thermal bridging through the continuous form of the hemp contributes to a well-insulated building.” Image: Shayne Hill

The couple have incorporated an ethic of salvage and reuse in the building of their home: the wooden cladding at the back of the house used to be part of an old squash court; the feature leadlight window and a quirky 19th century toilet cistern in the ensuite were from a secondhand sale; and in the kitchen the rangehood and sink have a few little bumps and bends that tell of being factory seconds.

Brenna and Dominic always had the idea that they wanted to build their own home and are justifiably proud of their achievement – in particular the hempcrete walls that are the stars of the build – but they are quick to acknowledge the key role of the House Workshop team. “We had a good relationship with them,” Brenna says. “They let us do a lot of things ourselves.”

It was an important project for House Workshop, too – only their second build. “We are trying to make beautiful, healthy, energy-efficient homes available to more people,” says co-director Raphael Read. “Hempcrete is a superb material; the challenge is making the build process faster and more efficient. That’s why working with Dom and Brenna has been so great; it has introduced us to hempcrete and added another feather to our cap.”