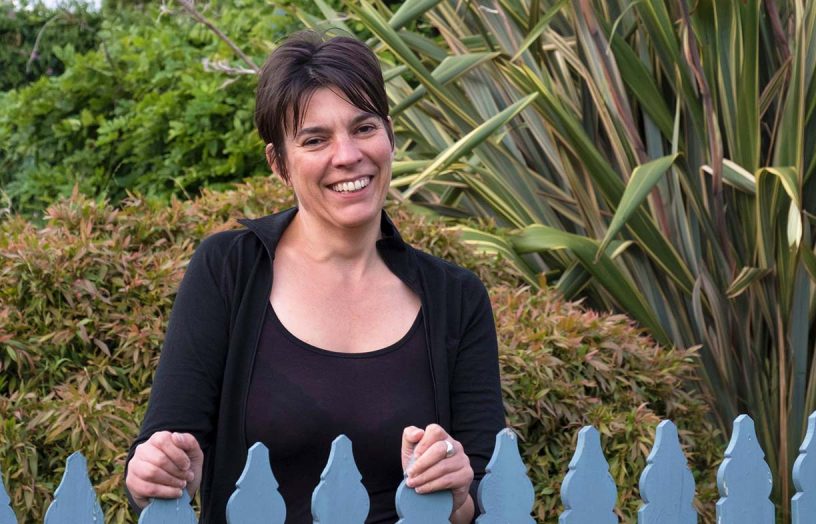 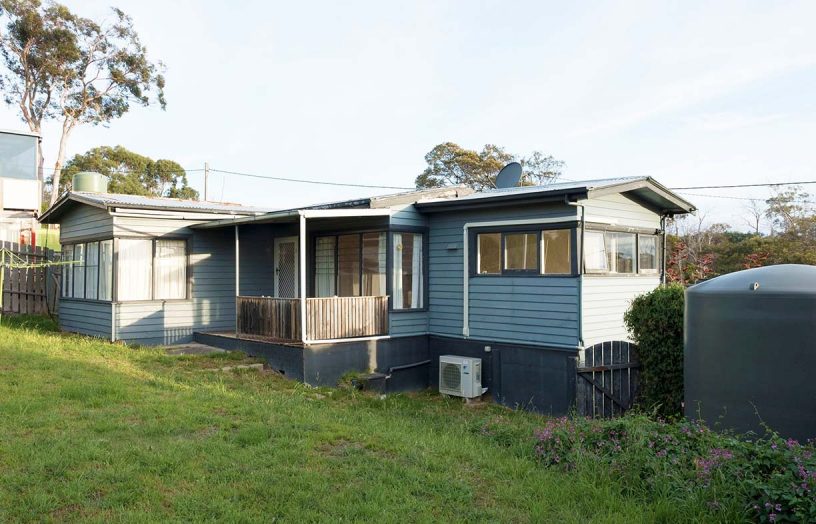 Annette’s modest shack needs lots of work, but has great orientation and is close to surfing, kayaking and snorkelling spots.

Annette Barwick bought her 1950s weatherboard shack in Dodges Ferry, near Hobart, for its proximity to the beach and its good orientation. It needs work though, and she’s keen to renovate to improve its thermal efficiency and make better use of the sea views. Uta Green of locally-based Green Design Architects offers suggestions for both a low-budget retrofit and a modest extension.

“I love the water and spend most of my spare time in or on it surfing, kayaking, sailing, snorkelling and swimming,” says Annette. “This house appealed to me due to the proximity of a lovely beach, beautiful water views from the kitchen and bedroom, and its location on a quiet no through road.”

She also likes the relaxed ‘shack’ feel, but admits the house is in need of TLC. Her priority is to make the existing structure as liveable as possible for all seasons, ensuring that it is thermally efficient and takes full passive solar benefit from its position. Her planned works include replacing all windows with double glazing and replacing wall linings, ceilings, eaves and roof.

She is also keen to take advantage of easterly sun, and make better use of the sea views to the west. An extra bedroom – or at least space for a study nook – and a larger living area are on the wishlist if the budget allows. She is keen to improve the privacy of both house and garden, and one day would like a sauna somewhere on the property.

Annette has a limited budget for her project, and is wary of overcapitalising in an area that she describes as “still very much a shack community”.

Uta Green is well versed in what’s needed to retrofit often poor-performing mid-century houses like Annette’s to meet the challenges of the Tasmanian climate. She addresses some important issues Annette needs to consider, and outlines two possible approaches for upgrading the building envelope and optimising the layout, with and without an extension. 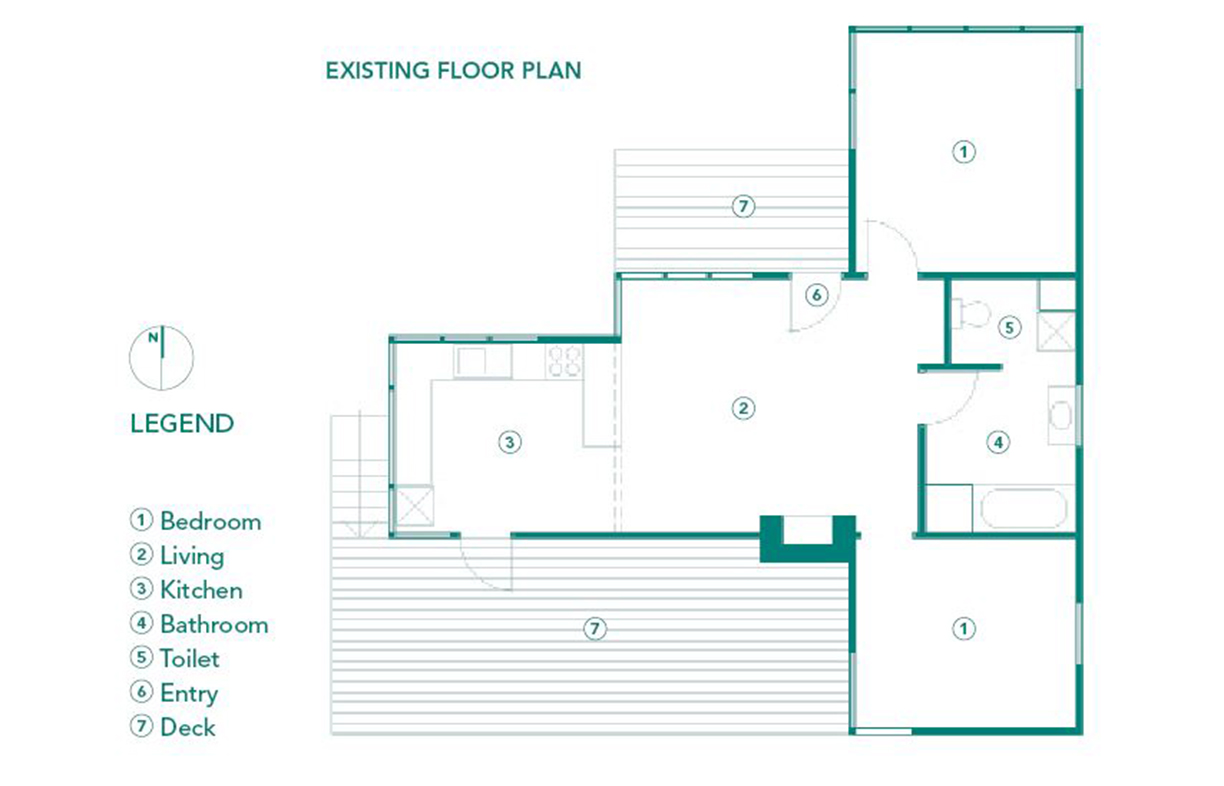 This house is located in a lovely spot by the sea, near one of Hobart’s favourite surf spots. Views are of the water and the sunset, and a reserve just across the road. The land falls away to the south-west, and while the garden to the north is hidden from the road, it’s overlooked by the eastern neighbour.

The house itself is unassuming and has been built to a minimum standard, but is structurally sound and has plenty of potential.

The budget of $150,000 to $200,000 may not stretch to cover Annette’s entire wishlist, so we recommend prioritising what’s most important, and perhaps staging the works.

It sounds like Annette is planning to live here for a long time, but it’s worth noting that we recommend to all clients to be clear about whether they are building or improving a house for themselves or for resale. While most agree that good insulation, sustainable materials, thermal comfort and high star ratings raise the emotional, environmental and practical value of a house, it is an unfortunate fact that these things don’t normally raise the valuation as assessed by banks or some prospective buyers.

For example, a second bathroom may raise the resale value, but for one or two people a single bathroom should be sufficient. So if the intention is to stay in the house, the money is probably better spent elsewhere. 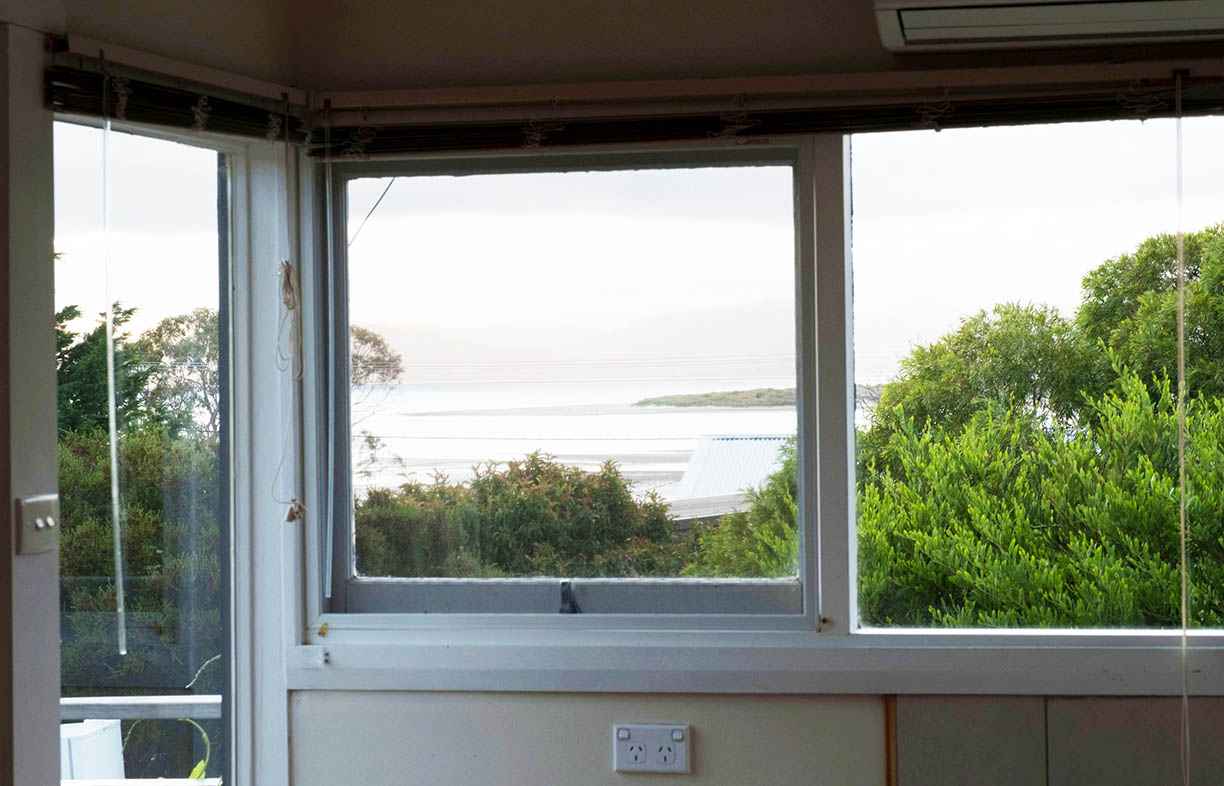 The best water views are to the west from the existing kitchen; Uta suggests converting this to the living room.

To extend or not to extend?

We support Annette in prioritising quality (performance and comfort of the house) over quantity (more space). Perhaps it is not even necessary to add a third bedroom if an alternative arrangement can be found. If a study and a guest room are required, those two functions overlay quite well in the same space, possibly aided by a fold out bed which is used only occasionally. A study nook may fit in the living space. Alternatively a garden studio could form a later stage; this could be built in association with the sauna Annette would like.

A larger living/dining/kitchen space is certainly necessary, as the current living room is too small to accommodate both a sofa and a dining table. It is also generally difficult to furnish a room that has many doors and windows.

Given Annette’s modest budget, we suggest two options: the first is a lower cost improvement of the house, based on internal renovations only and with minimal structural changes; the second, more costly option is a small extension which adds a bedroom with a water view and access to the existing deck.

The first option does not change the footprint. Instead the rooms are reconfigured so the space with the best sea views becomes the lounge. A smaller and more efficiently organised bathroom allows some extra space to be claimed for the central kitchen/dining room, plus a study nook.

Along with adding a bedroom, the extension option responds to Annette’s desire to enjoy more morning sun in the house by moving the awkward bathroom and extending the living space to the eastern wall, to provide a new kitchen. This way morning light can be admitted deep into the living space through an enlarged window.

While the planning scheme does protect privacy and access to sunlight, it does not protect a water view. However, we believe it is always worth respecting neighbours’ amenity and not building in their view. For this reason, and because the existing spaces already have a good northern aspect, we suggest any extension is built to the south. 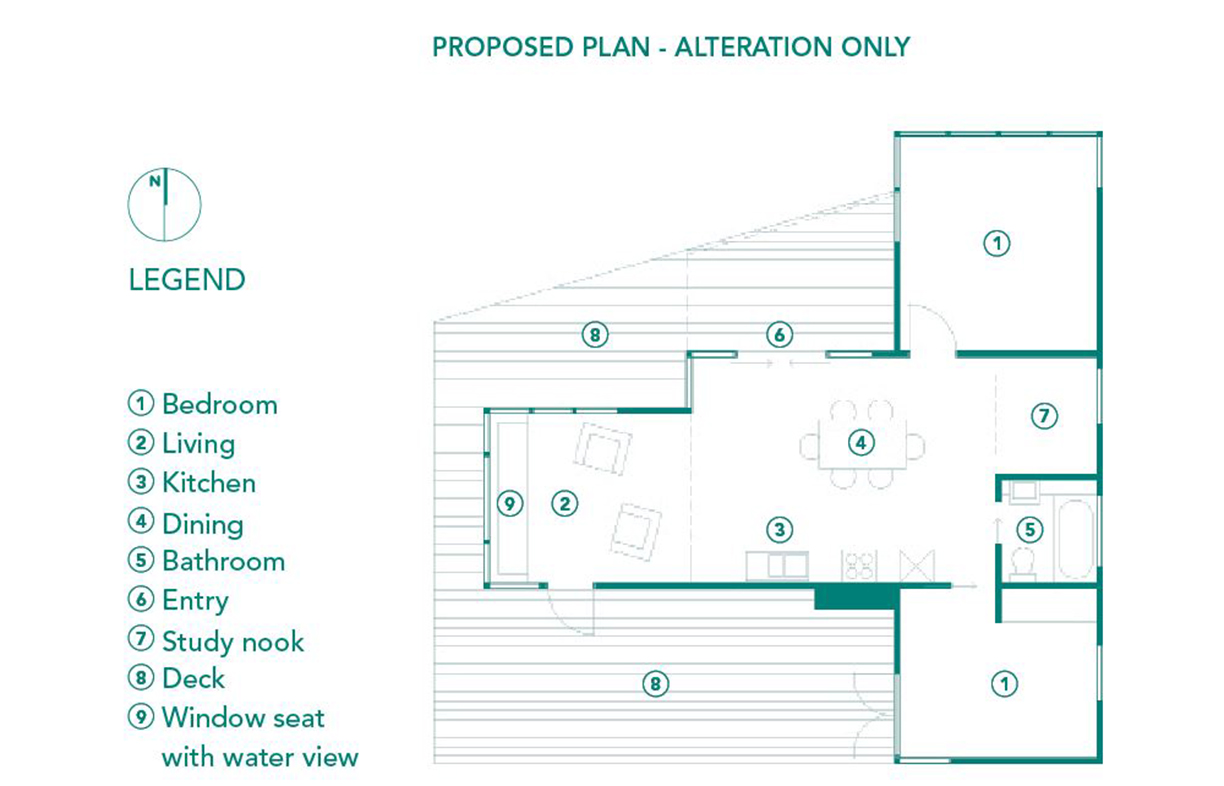 Whether or not Annette decides to extend, attention to upgrading the existing structure will be important for improving the performance and liveability of the house.

The house is already making the most of the sun and views in terms of window orientation, and the roof overhangs are acceptable.

But single-glazed windows and louvres are not appropriate in climate zone 7. So we congratulate Annette on wanting to replace all windows. This represents a large part of the budget, but will be worth it in the long run. Also, replacing the windows and glazed doors gives us a great opportunity to improve access to the deck by reconfiguring some openings, and lowering the window sill in the living room to form a beautiful window seat.

Good insulation is essential in every Tasmanian house. Since interior wall linings need to be replaced anyway, that is the best chance to insulate the walls.

It is critical that all gaps are fully insulated. Unfortunately, it is not common practice to insulate the small spaces around windows and between studs at wall junctions – but it should be, as all those spots otherwise form thermal bridges. It is also important that insulation batts are split and laid either side of installations in the wall, especially around hot water pipes. Owners might even consider installing the insulation themselves to ensure a thorough job.

Generally we suggest R4 batts for walls, assuming they are built with 140mm studs, but since Annette’s existing stud walls are only 90mm thick, R2.5 to R2.7 will have to suffice.

Since the subfloor is accessible, installing insulation batts underneath the floor should be straightforward. Although a little dearer for the same R-value, polyester batts are nicer to work with overhead than mineral wool. Batts with a high proportion of recycled polyester content are available and should be sought out.
The ceiling is the most important element to be insulated. We recommend installing R5 or R6 batts if they fit. 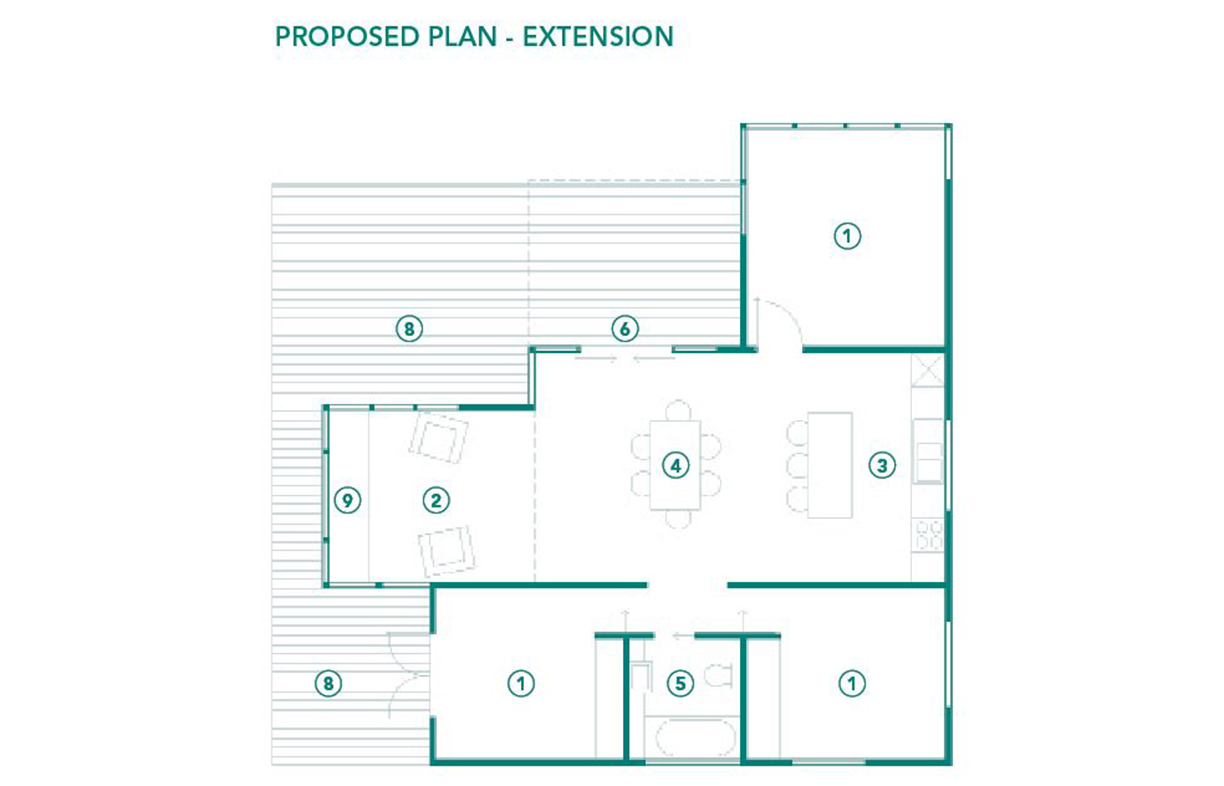 (See legend on 'alteration only' plan above)

The issue of condensation prevention in the roof needs to be given special consideration. It is crucial that the roof space is adequately ventilated, in order to avoid condensation forming on the underside of the existing roof sheeting. Ventilation could be achieved through the eaves, in which case air flow needs to be allowed between the top of the edge batts and the roof sheeting. Otherwise we recommend installing vents in the gables.

It is not easy to add thermal mass to an existing house like this, but there are a few options. Replacing the floor or wall materials would be a major cost. So we recommend adding thermal mass to the interior walls; they are accessible since the plasterboard is being removed anyway. We have developed a low-cost method of placing containers of water for thermal mass on extra noggins in stud walls. We prefer water as it has a much better thermal capacity than brick or concrete for the same weight and volume.

Phase change materials might also be an option, although more costly, and we recommend researching the sustainability of the ingredients, especially if palm oil is involved. PCMs come as a large plastic sheet with wax-filled compartments. As the sheets are not vapour permeable, we recommend placing them in internal walls only, as floors, ceilings and external walls should be kept permeable to avoid condensation issues.

Since the block is sloping, we suggest a more usable outdoor area can be created by extending the northern deck, and connecting the two decks around the side of the house with the sea views.

A roof over part of the deck will be valuable in the fickle Tasmanian weather. Since most of the time Tasmanians want all the sun we can get, a clear roof is appropriate. If flexible shading should be required in the summer months, this could be achieved with a retractable awning.

For privacy in the back garden we suggest planting along the eastern boundary. Shrubs should be chosen to a height that is high enough to prevent the neighbour from looking in, but which don’t grow up into their water view. Plants should ideally be native and adapted to the relatively dry conditions in the area.

An outdoor shower will be valuable when returning from the beach. We would also include a trough or at least a convenient water tap/hose, so wetsuits and other gear can be rinsed.

The shower will no doubt also be used in conjunction with the sauna, so we suggest backing the shower onto the sauna, away from neighbour’s views, preferably hidden behind a screen, trellis or hedge.

Since the sauna is not a high priority, it might form a later stage of construction, but could be planned for now if Annette goes ahead with an outdoor shower.

With some improvements, this is going to be a great place. We wish Annette all the best for her project.

Want us to design workshop your house?

Want more feedback on how to make your home more sustainable? In our Design Workshop we invite a designer to provide comprehensive feedback and suggestions to help make a reader’s build or renovation project even greener. Perhaps it’ll be you next! To apply, email sanctuary@renew.org.au with your plans and a brief outline of your project. 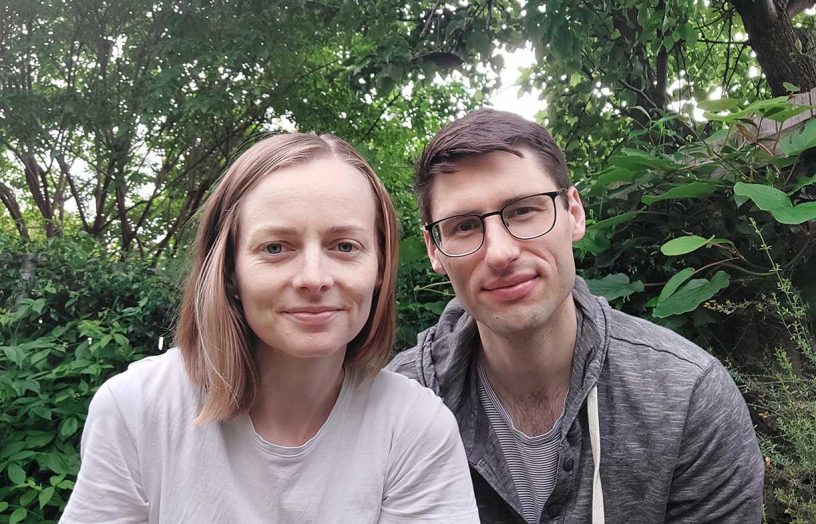 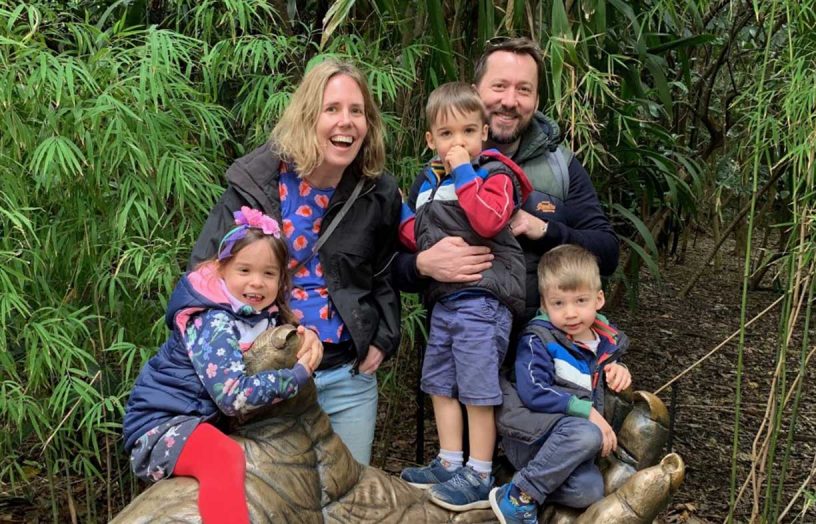