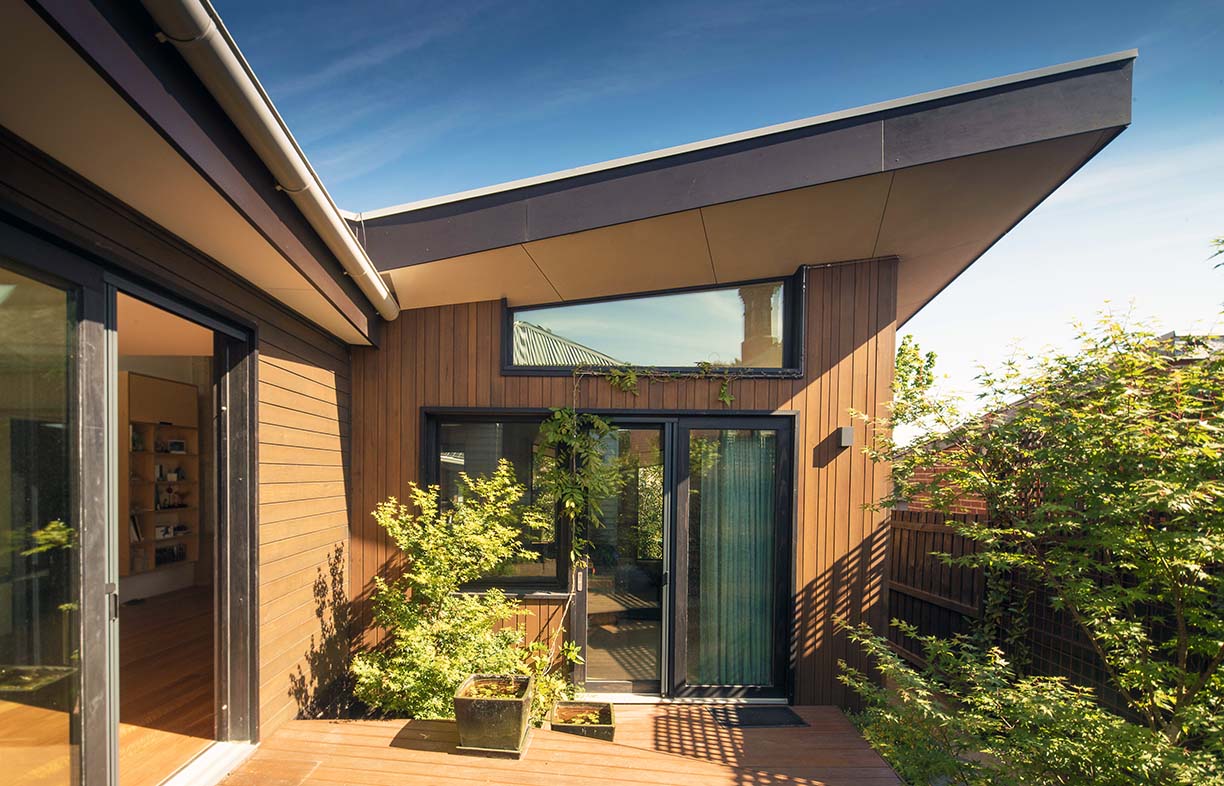 The family saves money on electricity (there is no gas connection) and petrol bills thanks to their photovoltaic solar system, mounted on frames on the roof to the left of the picture. “We fill up the petrol tank in our hybrid car about three times a year because 90 per cent of our kilometres are done using electric power,” Cameron says. “It’s only when we go on a road trip that we need to revert to petrol.”

A heritage house in Melbourne’s inner east has collected two major sustainability awards, just as a new report highlights the need for existing houses to be retrofitted to tackle climate change.

A report released in October in the United Kingdom called for ‘deep retrofits’ of existing housing to achieve the country’s carbon emission reduction goals. Produced by the Institution of Engineering and Technology and Nottingham Trent University, ‘Scaling Up Retrofit 2050’ outlined four main barriers to retrofitting houses: lack of customer demand; a lack of effective policy drivers; high initial costs; and lack of financing options.

Australia suffers those same barriers, and the volume of new houses – about 214,000 new starts in 2017 compared to about nine million existing dwellings – means we are similarly incapable of building our way to a zero-energy housing future without tackling existing homes.

How might our millions of existing homes become more sustainable and energy efficient? Unfortunately, there has been little government leadership around this issue since the Energy Efficient Homes Package, rolled out quickly by the Rudd government in 2009, which resulted in the ‘pink batts’ saga. The notion of retrofitting houses has barely rated a mention in the aftermath of the Royal Commission into this program which is associated with four deaths.

However, that lack of leadership – or retrofit incentives that other countries have introduced – didn’t deter one visionary couple from tackling this unacknowledged problem.

Transport engineer and self-confessed data guru Cameron Munro together with engineer partner Karin, set out to bring an old, dark, leaky timber house – “where the sash windows rattled when it was slightly breezy outside,” Cameron says – into the modern, sustainable-design era.

Cameron and Karin’s overhaul of their Armadale home prioritised long-term health and comfort benefits, and earned them and designer Luke Middleton of EME Design two major prizes at the Sustainability Awards in October: Best Single Dwelling (Alteration & Addition) and the Best of the Best categories.

The Munros intend to live in their upgraded home for at least 30 years, and committed to a major investment aligned with their functional and performance goals. Working with Luke, they removed the poor quality 1980s rear extension and built a new open-plan living space, which is topped with a butterfly-wing shaped roof that brings in northern light and maintains solar access to the backyard.

Aware that there can be discrepancies between modelled and actual outcomes using some rating tools, Cameron and Karin adopted Passive House principles to ensure their new home would perform in line with their stated ambitions. “The extensive planning and attention to detail required by the Passive House approach helped to provide this reassurance,” he says.

Radical Passive House moves included wrapping the entire building fabric – the heritage front section and the addition – in a protective membrane to prevent condensation from forming in the walls, which can lead to mould growth and associated health problems. 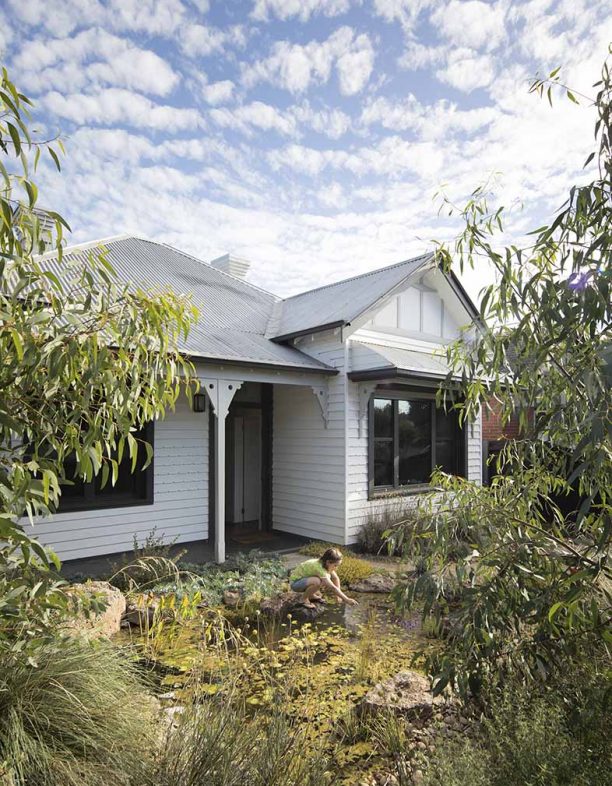 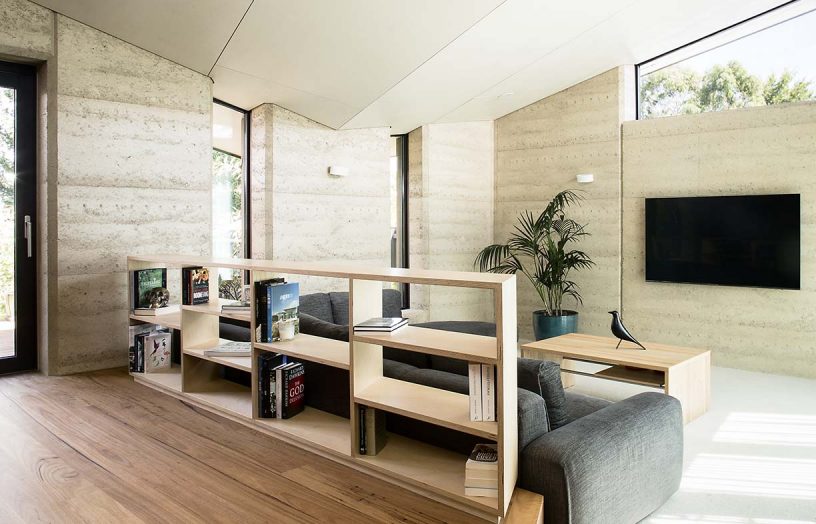 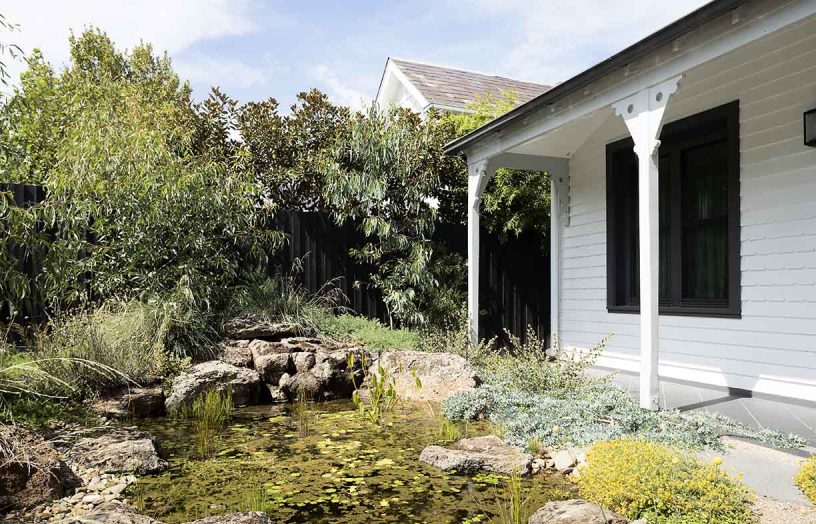 (Left and bottom right) Native landscaping and a pond in the front garden is designed to engage with the streetscape and attract wildlife. (Top right) Materials with high embodied energy were avoided as much as possible, with extensive use of timber and rammed earth instead.

They also installed super-insulation in the floors, walls and roof; and triple-glazed, argon-filled windows throughout. Together, these elements help to maintain stable indoor temperatures regardless of the season or weather conditions outside.

The third and crucial part of the equation is the heat recovery ventilation system, which continuously replaces stale air with fresh air, to help prevent condensation and improve indoor air quality.

Cameron says that these measures added a slight cost premium to the cost of their house, but he asserts it was entirely worthwhile. “Experience with Passive House in Europe, where it is much more established, suggests additional construction costs of around 10 per cent compared to standard buildings,” Cameron says. “In Australia, that premium is slightly higher because the approach is not yet widespread. But we think the additional cost is phenomenal value given the year-round comfort it provides, and the much lower energy costs.

“We need to change the mindset around housing design in Australia: the future of sustainable design has to be based on health and comfort,” he goes on. “For me, if it’s a toss-up between Passive House measures and a marble benchtop, I’ll take the health and comfort outcomes. I think other people will start to as well, as they begin to experience living and staying in these homes.” 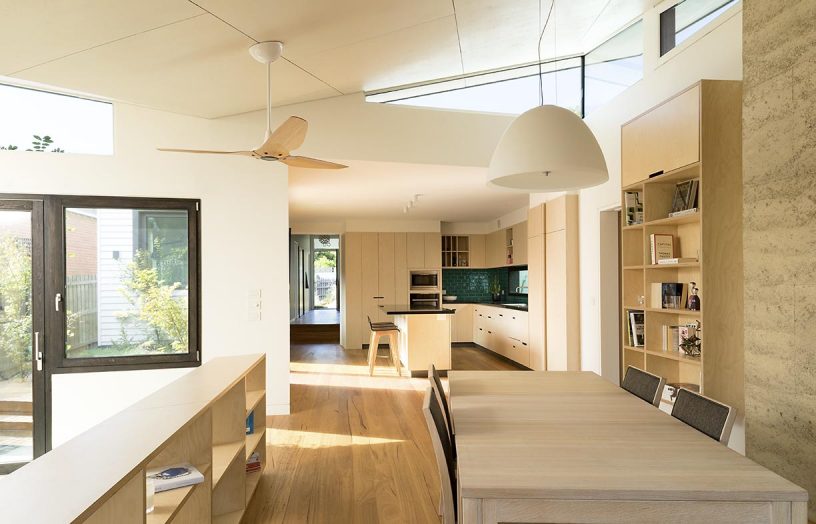 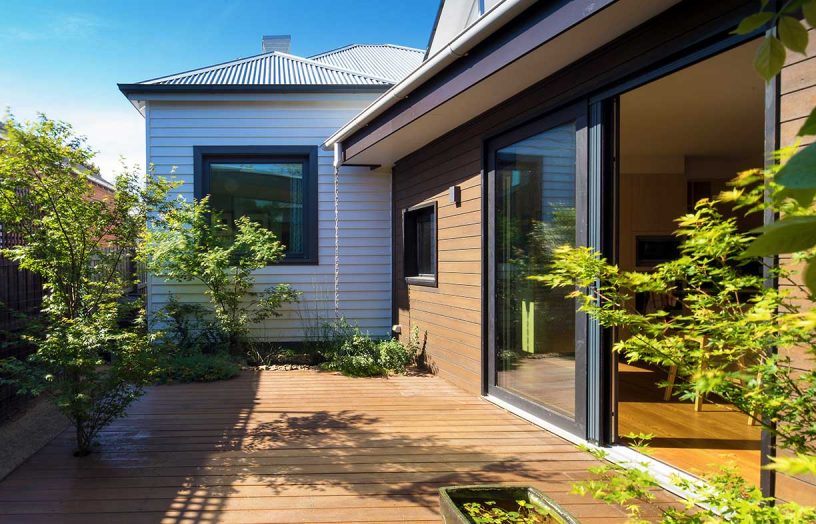 (Left) The butterfly roof of the rear extension is designed to bring in morning (eastern) and northern light to minimise artificial lighting needs and maximise winter heat gain. (Right) Trees grow up through holes in the courtyard deck to provide summer shade from the west sun.

This is one of the first attempts at a Passive House retrofit project in Australia, and while it fell just short of achieving certification using the EnerPHit retrofit standard (which permits a slightly higher air change per hour as measured by blower tests) Cameron is happy they took this path.

“The magic goal was 1.0 air changes per Hour (ACH), and our project achieved 1.2 ACH, compared to the average non-sustainable home that achieves about 30 ACH, and typical 6 Star houses, which achieve about 15 ACH,” he says. “What that means in laymen’s terms is that we have improved the performance of this house significantly – it performs 12 times better than a 6 Star rated house.”

The project has turned Cameron and Luke into ‘Passivists’, or Passive House Evangelists. Both have recently qualified as Passive House designers.

“For us, living like this in a Passive House is a no-brainer,” Cameron says. “Karin is Swedish, so this way of building is completely normal for her: it would be illegal to do anything else in Sweden. The negative is that you find yourself walking outside in shorts and a t-shirt and being cold, because you didn’t realise that the weather had changed; it’s so comfortable all year round in here.”

While Cameron is keen to spread the word – he participates in Sustainable House Day – he urges other homeowners who share his concerns about sustainable housing and climate change not to wait for leadership by government.

“This will have to be led by clients as a bottom-up change,” he says. “Passive House is the best model for comfort and performance, and if you want the positive outcomes without the risks, you’ve got to take on everything: insulation, airtightness and mechanical ventilation.”

For Luke, who has been designing and monitoring sustainable homes since 2005, this project reaffirmed his view that there is always more to learn. “I’m interested in true collaboration. We operate what I call an ‘elastic loop’ process, that allows for feedback and continuous improvement over time,” he says. “Passive House offers a major improvement in comfort throughout the year as well as significant wellbeing benefits, whilst delivering phenomenal efficiency.”

Luke believes that Passive House has a way to run in Australia, as people catch up with the pros and cons of passive solar design.

“Yes, there are great examples of Australian passive solar homes built between 1960 and 2000. And there’s much to learn from these buildings, however, like most elements in life, things have moved on – we expect more comfort and safety with our cars, healthcare et cetera – and the same is true for homes,” he says. “To improve comfort everyone has grown accustomed to air conditioning, which is much cheaper to install now than it was in the 1970s, however, there is an alternative that has long-term benefits.”