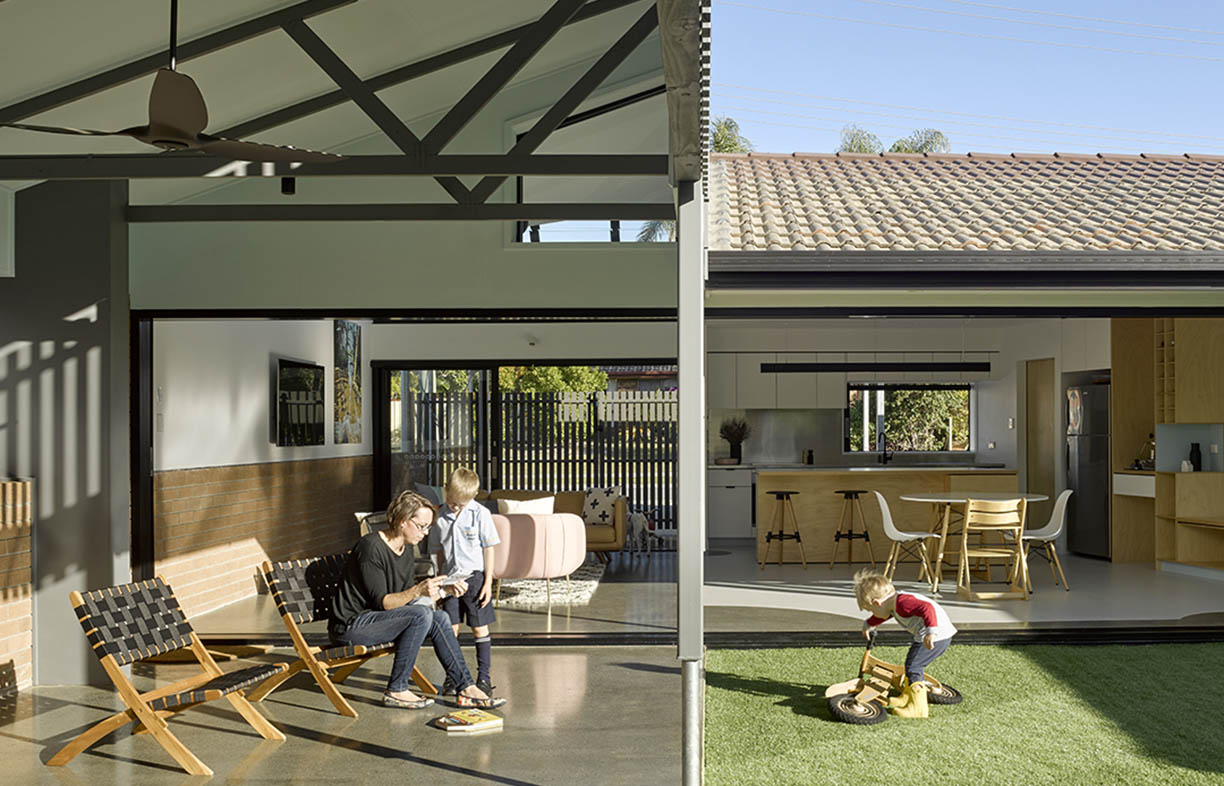 The alteration and addition retained as much of the original brick structure as possible, so it’s still possible to imagine what the house was like before, when a driveway ran down the side of the house into a garage. The ‘crusty old garage’ is now a covered open-air terrace; the driveway has become the living room with the car now parked at the front.

A standard, single-storey brick house in Brisbane sets a precedent for how 1980s housing stock can be renovated to suit a sub-tropical climate.

Josh and Bec have lived in their Brisbane home for 10 years, but it wasn’t always the “best house on the street”, as it feels now. “It was an ugly brick house, about 30-something years old, and not much had been done to it in that time,” Bec explains. “We started looking at other options to buy and move – which gave us some headaches – but we knew this house had good bones and good potential. It just needed the right person to see it, and know what to do with it.”

That right person was architect Paul Worroll, of Reddog Architects, whose work Bec had spotted in a magazine 12 years earlier. The couple approached him to scope out some options, despite some misgivings expressed by family and friends, who wondered whether it was wise to engage an architect, Bec recalls.

“Then, once we started, those same people said: ‘I can’t believe you are renovating a crusty old garage’, but the proof is in the pudding,” she laughs. “Now they walk in and go ‘Wow!’.”

Paul began by discussing the couple’s needs and wants, and devised a plan to see them through the various stages of family life; their two sons are currently aged seven and four.

“We know how important domestic environments can be for kids, because they influence your memories and your view of ‘home’,” Paul says. “We spoke to Bec and Josh about their brief, their kids, their lifestyle and expectations, and we asked them what they wanted in five years, and 10; we were looking at the bigger picture rather than just their immediate needs.

Paul’s redesign transformed the three-bedroom, one-bathroom house – with bedrooms that previously opened from the dining room – into a four-bedroom, two-bathroom dwelling with better separation of public and private zones. The new open-plan kitchen, dining and living room opens on two sides: to a protected courtyard beside the new carport, and an elegant covered outdoor room in the backyard.

“That space is a toy car track and then we’ll eat lunch out there,” Bec says. “Because it’s north-facing, different parts are in sun and shade over the course of the day, which changes how we use it.”

Having grown up in the area, Bec and Josh knew they could harness breezes off Moreton Bay for passive cooling in summer, and take advantage of the northern elevation at the rear for passive heating in winter, if only they had the right plan. So, their new living space has plenty of doors, louvres and fans to capture and direct cooling cross-flow, and concrete floors to store winter heat.

“When the doors are open – which they are all day, every day, even in the middle of winter – it’s like there’s no outside-inside division,” Bec says. “We didn’t know what exact details we wanted in the plan, but we knew we wanted that. 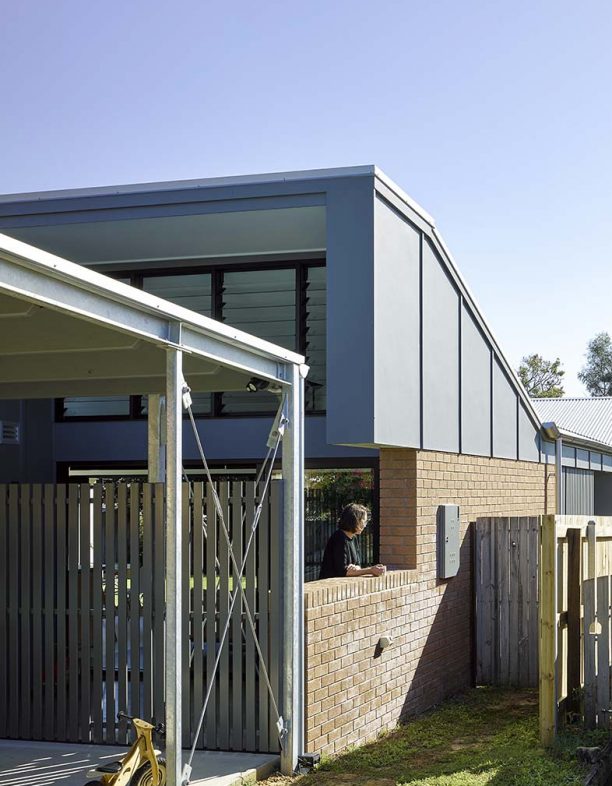 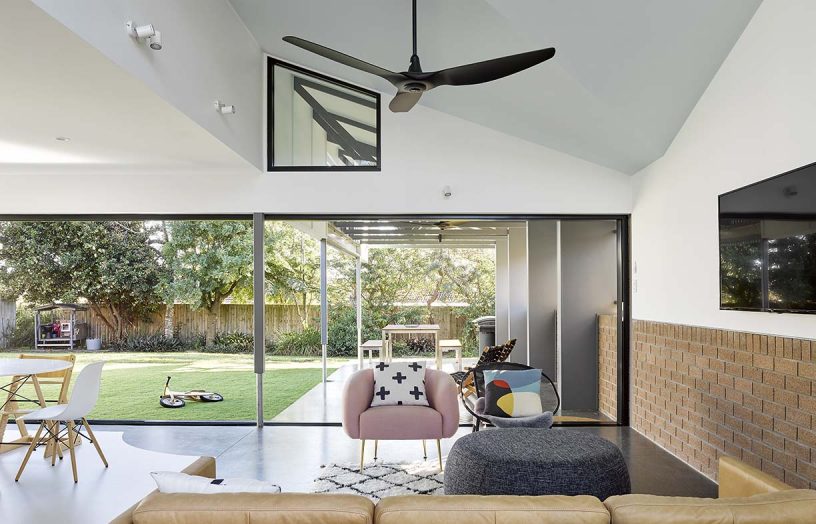 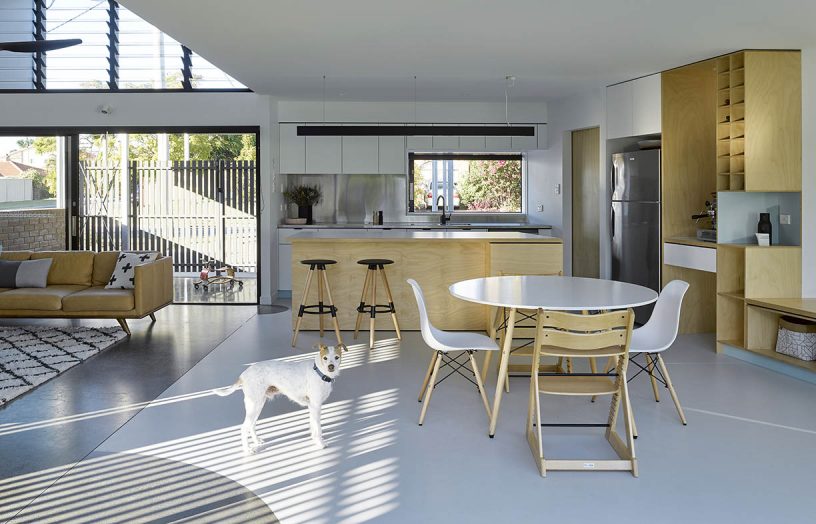 JB House remains a single-storey brick house in a street of similar homes; what sets it apart is the way it responds to climate and the street. The high roofline allows for daylighting and a low brick wall only partially encloses the front terrace to allow for neighbourly connections. Sliding doors completely open the house to the front and rear yards and the covered terrace. The internal and external slabs are thermally isolated to help retain an even temperature inside. A lofty ceiling in the modest 29-square-metre living room extension allowed for high breeze-capturing louvres to be installed. Painting rather than polishing the whole slab was one of many decisions which helped keep costs down.

“And I can’t imagine being confined to 900mm-wide door opening now,” she adds. “We might walk outside for a few minutes to drink our coffee, and notice the clouds patterns, or that a storm is coming. That connection to the outside is what we love, and it has just become part of our day.”

Where their home was originally introverted and disconnected from the garden and the street, the renovation opens up to both, and that’s the most pleasing part of this project, Bec says.

“Our friends were initially concerned that passers-by would be able to see into our lounge room, but the cross breeze we get through there is a lifesaver,” she says. “And when Paul talked about ‘connection to the street’, we wondered: ‘What does that actually mean, is it just architect lingo?’.

“Now we can wave to people walking their dogs down the street, and our sense of community has really increased,” she continues. “We’ve lived here for 10 years, and yet we’re still meeting locals for the first time, since the renovation finished.”

Paul offered the couple several clever architect tips that helped to keep overall costs down, Bec says. This includes the decision to paint, rather than polish, the concrete slab in the kitchen.  “We experimented with dealing with thresholds of the floor with paint, which is basically a free design item, so the columns sit in a circle of paint,” Paul explains. “That solution has made it even more special,” Bec says. “Also, we had a great builder who was always looking at the costs as he was building, so that if we spent a bit more in one section, he’d help us cut costs somewhere else.” 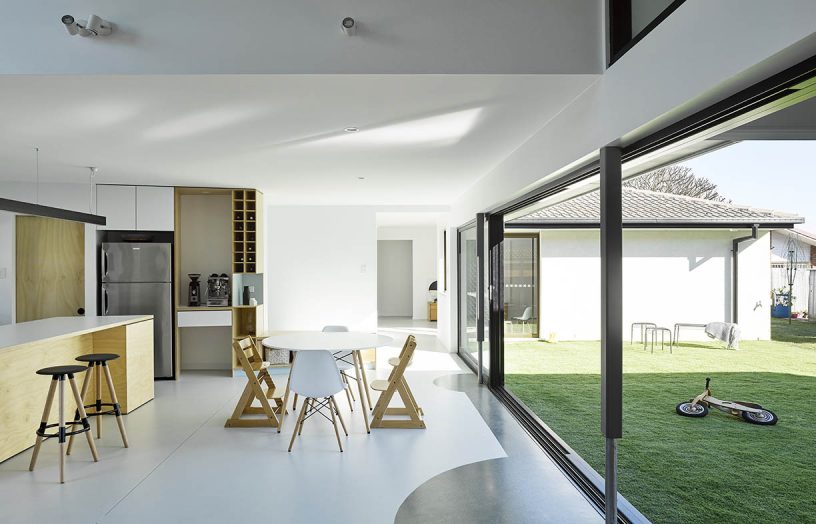 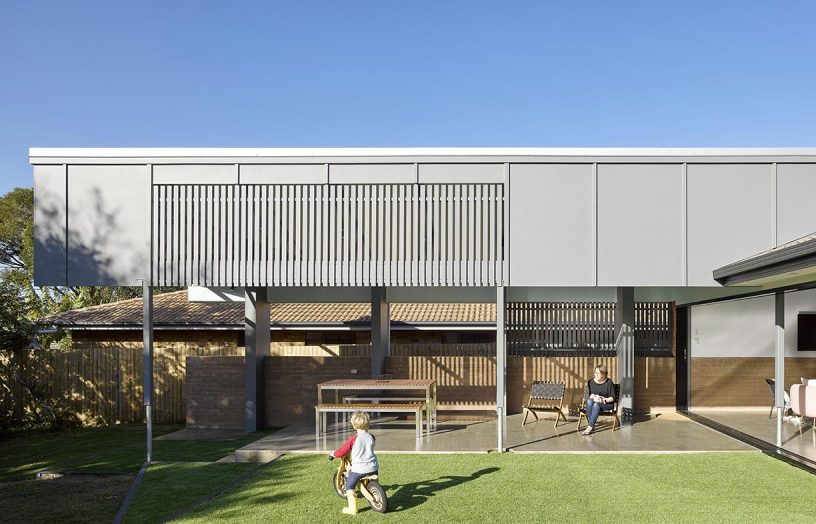 Passive solar design principles were employed: a new concrete slab acts as thermal mass, windows to the north and south capture prevailing breezes for cross ventilation and the new entry provides effective zoning between private and living spaces. In Brisbane’s climate, these measures have been enough to eliminate the need for mechanical heating or cooling. (Image 2) Although prominent from this aspect, the terrace roof is angled away from the neighbours. Timber slats provide dappled shade from the west.

The raw finish that characterises many of the materials – such as the exposed timber trusses, brickwork that flows from outdoors to inside, and the steel pole columns – lends an appealing lack of pretension to this home, which enables the quality of the spaces to become apparent, Paul says. “For us, it’s about using common materials in a smart way,” he explains.

“By making some bigger and more expensive changes now, we don’t need to move to a new house in the foreseeable future,” Bec asserts. “And even though we’ve lived here for 18 months already, our house still feels new. One of the things we love about the design is that we use every square metre of space every day, there’s nothing superfluous.”

Working with an architect actually helped them to keep costs down – the entire project cost about $285,000 – while achieving their long-term objectives, she says.

“We were mindful of over capitalising, because you have to be considerate about what you do in a suburb like this, so we managed to install a simple but functional ensuite, which contrasts with our custom plywood kitchen,” she says. “We splurged on that, because we both love cooking. It’s about knowing where to spend the money and where to save.”