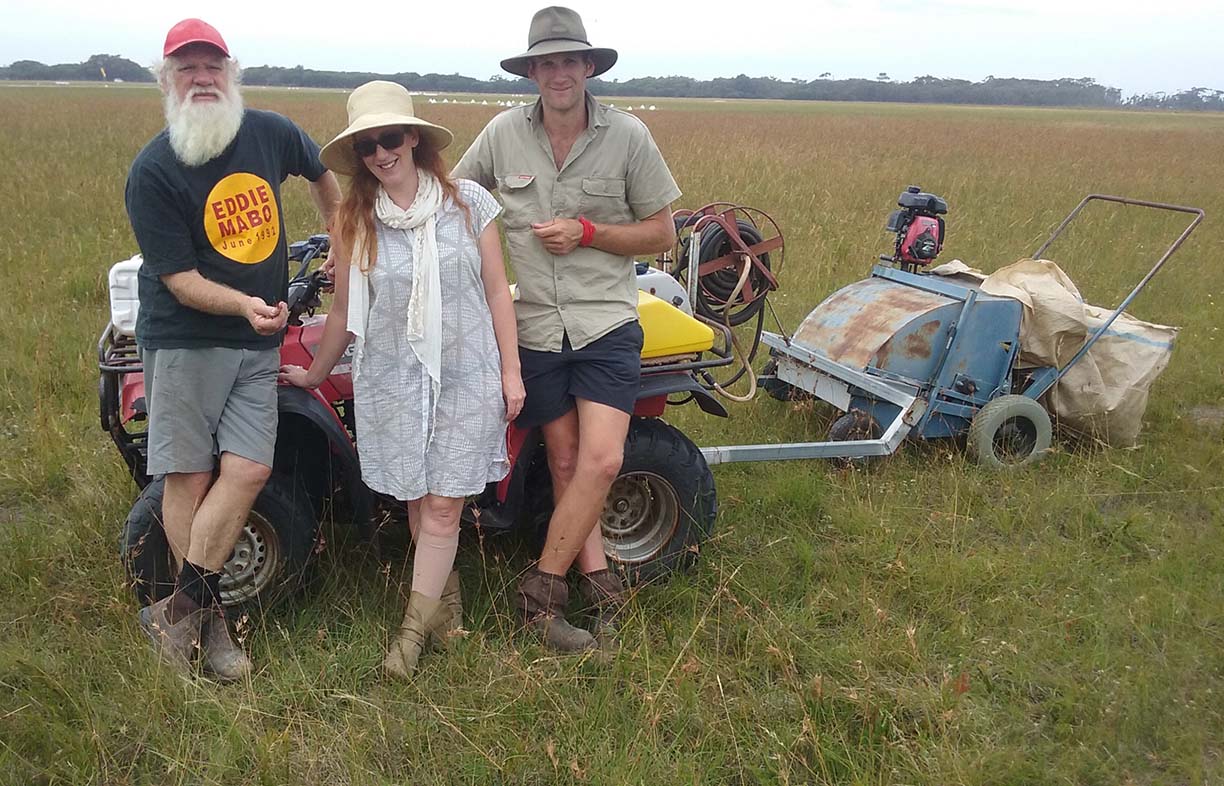 Bruce Pascoe – pictured here with his children Marnie and Jack at their 2017 harvest – wants to see more research that supports the cultivation and commercial production of Australia’s original staple crops.

The Aboriginal-owned Merian Munjie Food Company is cultivating indigenous staple crops with the goal of achieving commercial-scale production. However, without sufficient agricultural land the company faces an uphill battle.

The Merian Munjie Food Company was established in 2017 by a group of Yuin Gurandgi men based in south coast NSW and East Gippsland. One of the founders Bruce Pascoe says the company aims to grow indigenous staple crops, such as Murnong (yam daisy) and kangaroo grass, on a commercial scale. Late last year they ran a successful crowdfunding campaign to purchase a native grass harvester and flour mill. Their first harvest in February 2018 was promising.

Bruce is a celebrated author of 16 books including Dark Emu, Black Seeds: Agriculture or Accident?, in which he discredits the hunter-gatherer idea (and the accompanying tale that Aboriginal people weren’t managing the land before European invasion and colonisation) as a convenient argument for the theft of Aboriginal land. Bruce’s research concluded that Aboriginal people cultivated the land for tens of thousands of years: they used fish traps, managed controlled burns, grew yams and grain on a vast scale and traded food surpluses.

Over a dozen bush foods are grown on a commercial scale in Australia. These include lemon myrtle, mountain pepper, bush tomato, finger limes, Kakadu plum, quandong, wattle seed and Davidson plum. But what the Yuin Gurandgi group is doing is different: “We’re using totally different foods and we are concentrating on Aboriginal staples, not the sexy condiments that commercial people want to use.”

The involvement of Aboriginal people in the native foods industry is strongest in the wild harvest species such as wattleseed, bush tomato and Kakadu plum. However, as the harvest moves from small-scale wild harvest to large-scale production there is mounting evidence of Indigenous displacement. Bruce doesn’t want that to happen again. He wants Aboriginal people to get their land back and be able to live off the proceeds of production. “The government talks about Aboriginal employment and Aboriginal inclusion. This is an opportunity to do just that.”

The question of plant ownership is a loaded issue. On the crowdfunding page he wrote, “Other people will be growing these plants, but I hope Australia remembers who domesticated these plants and who brought them back to the nation’s attention and buy from Aboriginal growers rather than the mainstream companies who will be jumping on to the bandwagon. We don’t want to be dispossessed a second time.”

The Kakadu plum is an example of this dispossession. A traditional bush food, the plum is loaded with vitamin C. Big Pharma has been trying to patent extracts from the plum and in 2011 the cosmetics company Mary Kay, based in Texas, tried to patent the plum. So far, the pharmaceutical and cosmetic companies have been unsuccessful, but the wolf is at the door. Add to this the current situation where Aboriginal and Torres Strait Islander groups, in order to gain government funding, often have to sign over intellectual property rights to their traditional crops, and you can understand why Bruce Pascoe has created an Aboriginal-owned and run company.

The staples the Merian Munjie Food Company grows offer some ecological benefits – native grasses such as kangaroo grass and native millet are perennial crops. Perennial grasses have deep root structures that are suited to Australia’s dry soils and do not require ploughing. This means that the soil around perennial plants is less compacted and has a higher moisture content, and the farm requires less diesel inputs. Also, when you leave the roots of a plant in the ground instead of pulling them up every time you harvest, carbon is sequestered in the soil. 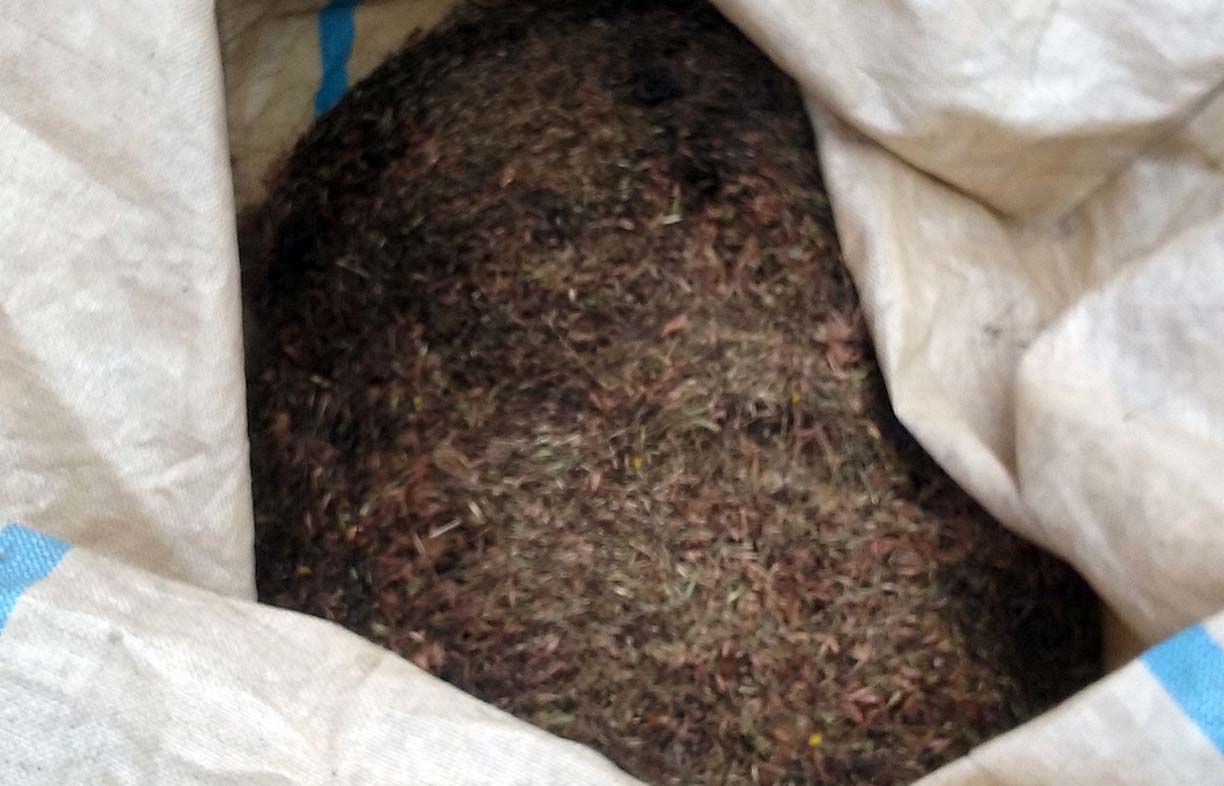 Staple grains such as kangaroo grass and native millet have been harvested for millennia, and are perennial crops well suited to Australia’s dry soils.

Which all sounds rosy, but it is complicated. In 2012, the Rural Industries Research and Development Corporation and Australian Native Food Industry Limited did a stocktake and found: “The Australian native food industry is small, vibrant and diverse. In 2010 farm gate production was valued at between $15 million and $25 million and direct employment in regional Australia was between 500 and 1000 individuals. Up to half of these individuals were Indigenous people living in remote communities.” Reading this, you could be forgiven for being optimistic. But although half of the people employed in these industries are Aboriginal, the majority of the profits go to non-Indigenous stakeholders.

Merian Munjie’s task is not going to be easy. Unlike the farming of wheat, the farming of indigenous staples involves yield and production variability, high production costs and labour-intensive harvesting. At this early stage of development, the staples are unimproved varieties. The reason farmers grow wheat is because it has been bred for thousands of years to have fat seed heads that are cheaply harvested.

Agricultural scientists haven’t yet applied themselves to breeding cultivars of indigenous staples. Small pockets of research are underway – the University of Western Australia is researching commercial opportunities for the native radish, Platysace deflexa, for example, but funding is scarce. Bruce wants scientific investment into these plants: “It’s just a technological problem. Any time you turn to a new food source you must find a method. So, what we’re looking for is a method. And that’s where we’ve been wanting assistance.” The University of Melbourne has expressed an interest in commencing research into breeding agronomically viable indigenous staples.

But on the day of the interview, Bruce Pascoe is exasperated – both in his capacity as a founder of the Merian Munjie Food Company and as an Aboriginal Australian. They haven’t yet got access to enough land to make the project work on a commercial scale. He’s just mortgaged his own house to purchase a farm through his own company Black Duck Foods, frustrated the agencies that promised to support Aboriginal land purchases have not done so.

“I’m getting sick of talking about it. What it feels like today is we’ve been dispossessed again by benign disregard.” He sighs, “The very disappointing thing about all of this is: Australians talk big about Aboriginal inclusion but they’re not very good at following through.”

For this project to work, three major things must happen. First, the Merian Munjie Food Company needs to own land. He would like this land to come from government but most likely a wealthy independent investor or two (Dick Smith, are you reading this?) will need to back the project and donate an adequate amount of money so that they can farm on a larger scale. Second, well-funded agricultural research into the development of high yielding cultivars of indigenous staples is needed. And third, Aboriginal intellectual property rights need to be protected. The crowdfunding campaign to purchase a tractor was just the beginning of an uphill slog.