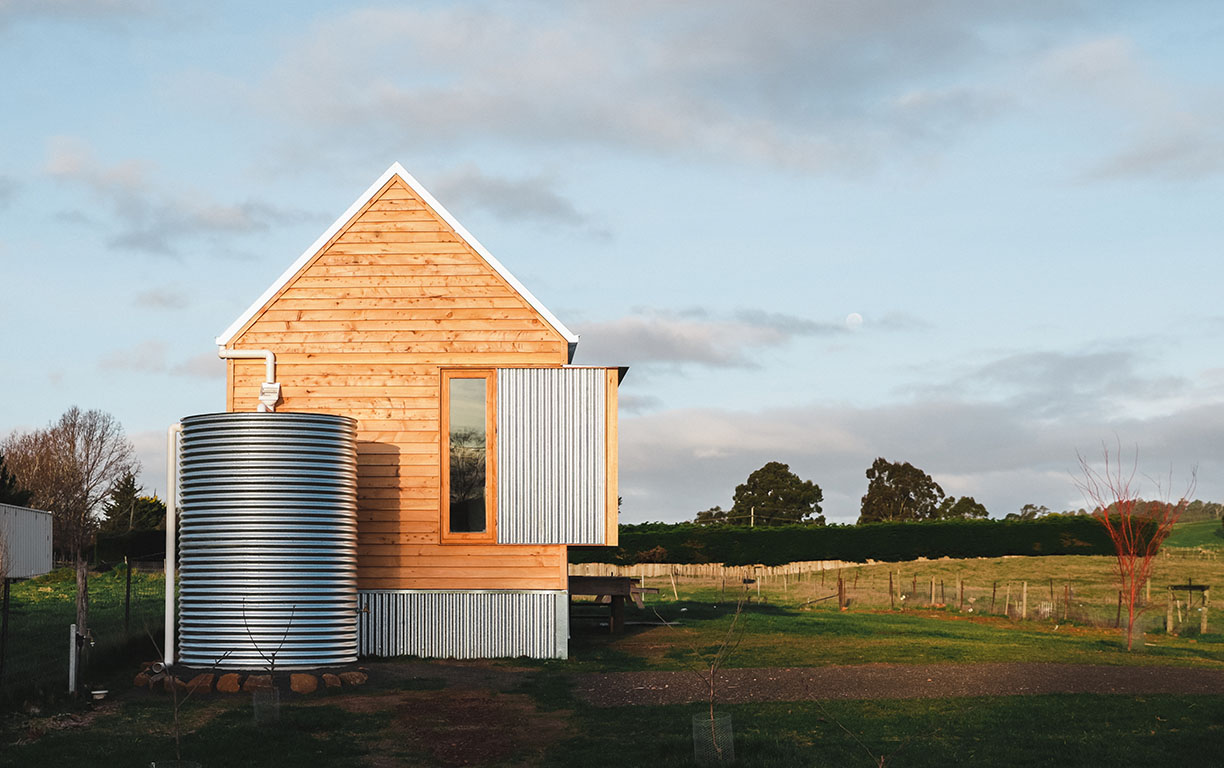 Drawing from the area’s pioneering past, Jiri Lev’s diminutive family cottage in northern Tasmania uses locally sourced, natural and raw materials and is a blueprint for affordable housing for the future.

When architect Jiri Lev and his young family moved to the Meander Valley in Tasmania in 2019, it was the quiet simplicity and ‘politeness’ of the valley’s Georgian era cottages that resonated with him. Wanting to build a modest home that could also act as a testing ground for some of his ideas on housing solutions, Jiri tapped into that local vernacular and, like the early settlers, kept his search for building materials unpretentious and local.

Wedged between the imposing ramparts of the Great Western Tiers to the south and the Gogg Range to the north, the upper Meander Valley was a prized area of local riches – including tradeable ochre – for the Pallittorre people who called it home for at least 10,000 years prior to European settlement. Devastating frontier conflict and subjugation of the Pallittorre handed the valley’s riches to the new settlers, who were soon able to feed, clothe and house themselves largely from the lands surrounding them.

In a country where life is now enormously abundant for most, where the average new house is among the biggest in the world and where we are facing a housing supply and affordability crisis, Jiri is urging us to revisit principles of economy, necessity and thinking locally as we attempt to re-imagine Australian housing and home ownership. What Jiri hoped to demonstrate with this 26-square-metre dwelling – the first stage of what will eventually be a modest two-to-three-bedroom home – is that good design, sustainable best practice and the utilisation of non-toxic natural materials are all available to those on small budgets; it just takes some careful thought and shifting of expectations. 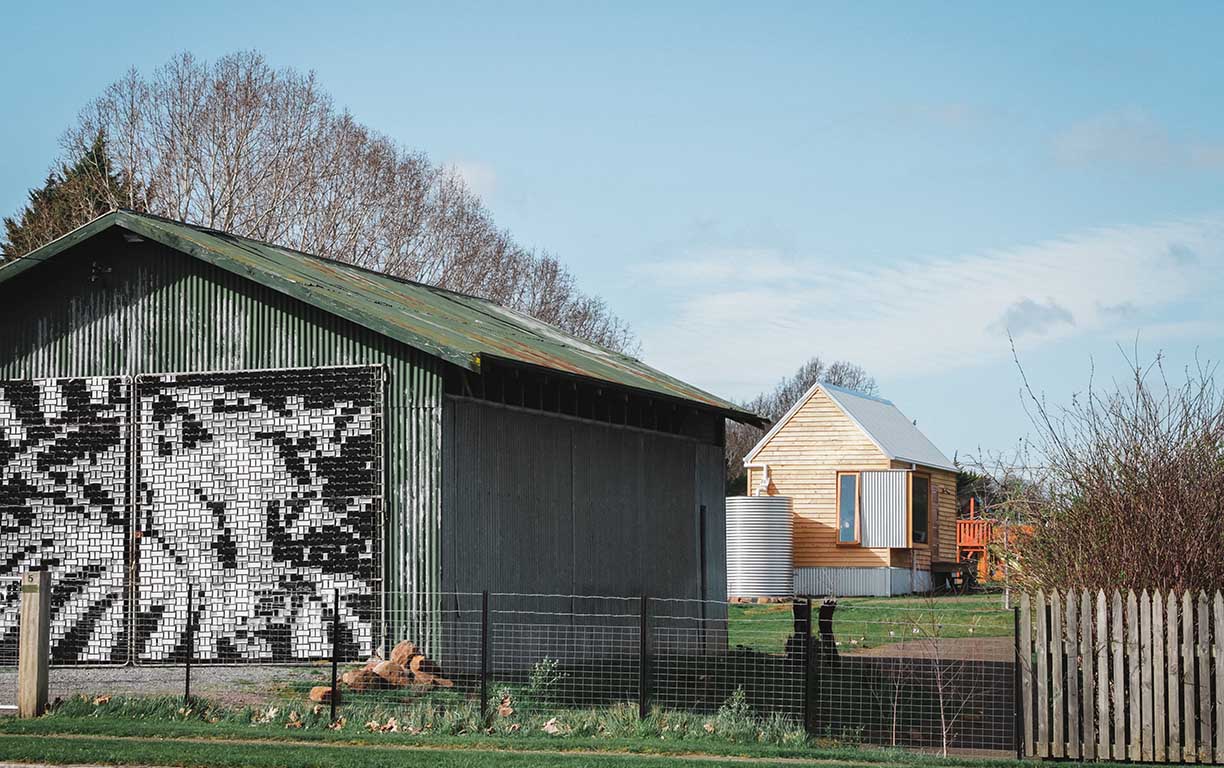 The cottage is tucked behind a shed that used to house the local school bus, and is now decorated with a thylacine mural created by Jiri and his wife.

“The small building represents the first phase of a larger pavilion house, designed to be lived in comfortably either as one home or two independent residential units,” he says. “This has been achieved at a cost equivalent to an economy project home, reflecting typical Tasmanian inventiveness and an ability to make the most out of quite little.“The building demonstrates the ability of the island state to be wholly self-sufficient in bulk construction materials,” he goes on. “It serves as an easily replicable prototype of an affordable, debt-free, locally sourced and delivered housing model.”

Designed to sit in the local landscape harmoniously as a modern interpretation of a pioneer’s cottage, the gable-roofed little home is tucked quietly back from the road, behind a shed that until recently housed the local school bus. Soon after purchasing the property, Jiri and his wife decorated the shed doors with a striking mural of a thylacine, or Tasmanian tiger, generating plenty of local interest and speeding up the process of meeting many neighbours.

The single-room home with kitchenette, loft and separate bathroom evokes the close-quartered family living of pioneering days, with the addition of modern comforts and thermal efficiency via double glazing, insulation and good cross ventilation. The window configuration has been designed to enable passive solar warmth from the north via high-level windows for privacy, with a large box window incorporating an inviting seat popping out from the southern facade to make the most of the spectacular mountain views. 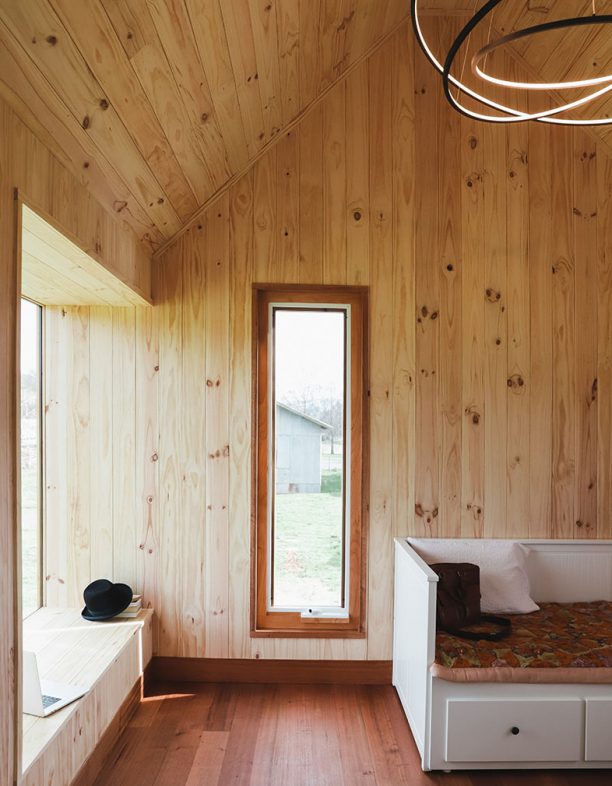 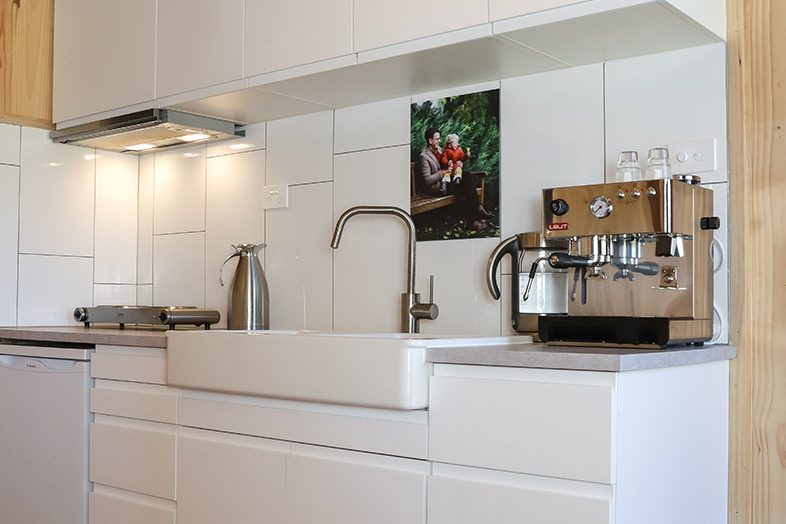 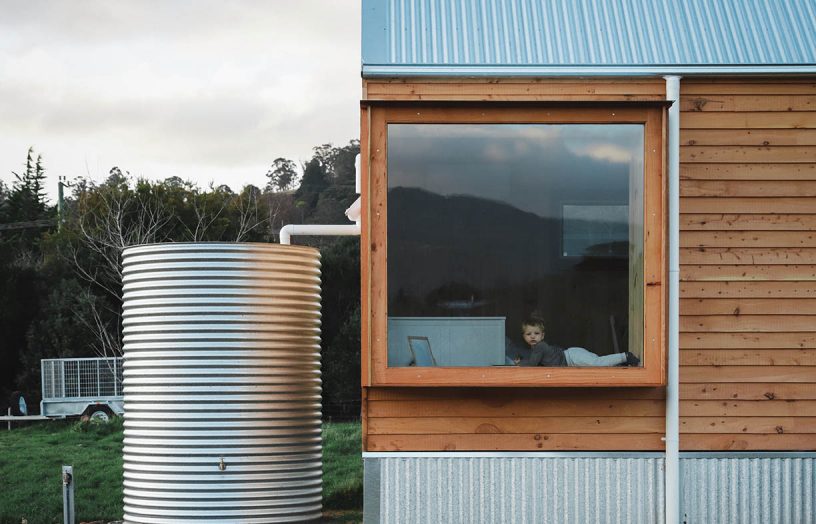 The interior of the home is defined by the warmth of wood: untreated radiata pine lining and Tasmanian oak floorboards, all locally and selectively sourced. The one departure from the simple gabled shape is the generous box window popping out from the southern facade, making the most of the mountain views.

The restrained palette of materials cladding the cottage has been utilised in a way that belies the almost unheard-of $85,000 build budget. Glowing gold from the still-fresh macrocarpa weatherboards and silver from the galvanised iron, the home sits like a little jewel in the village. Jiri worked with Meander sawmillers and builders, Timberworld, to select materials for the home that were locally sourced, sustainable, and would not require additional finishes beyond natural oils. Locally grown untreated radiata pine was used for the framing and interior lining, with natural sheep’s wool insulation filling the wall and ceiling cavities. Locally and selectively sourced Tasmanian oak floorboards, coated only in Danish oil, provide a warm platform for the modest but surprisingly open and roomy interior.

In fact, apart from the electrical cabling, kitchen cabinetry, some bathroom fittings, windows and exterior downpipes, the suite of materials was intentionally chosen so that like some of the abandoned pioneer cottages around the valley, at the end of its useful life this little home could be left to break down and return to the earth.

Drawing his inspiration from the past, this contemporary pioneer is also looking to the future. With a growing family, Jiri planned from the outset that the kitchenette in the cottage could one day be converted into a laundry and a connected second stage featuring a couple of bedrooms, a larger kitchen and a living room built alongside. In addition to providing more room for the family, Jiri intends this next stage to be a vehicle for further experimentation with building materials. 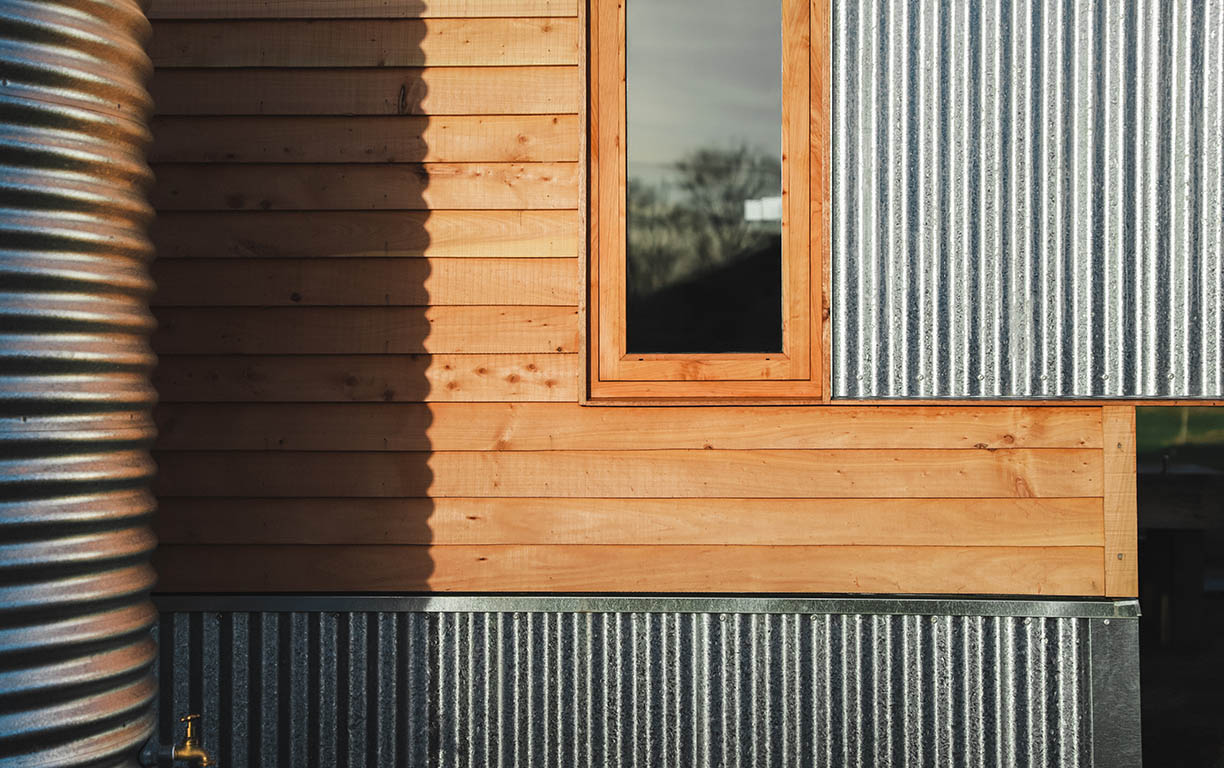 Most of the timber used in the build was macrocarpa, which came from windbreaks on local farms that had reached the end of their useful life.

Dubbing stage two as “40 Walls” (40walls.org), Jiri will experiment with durability and longevity by making 40 interchangeable panels constructed from various combinations of usually under-utilised or waste materials such as post-consumer plastic, concrete rubble and sawdust from local mills. Jiri envisions a time where we will all make use of waste materials in the construction of our homes, reducing their carbon footprint by avoiding “products straight out of catalogues”.

He also sees a future where the Australian norm of standalone dwellings becomes increasingly challenged. His practice’s energy is focused on multi-occupied homes, ecovillages and affordability through replicable designs and locally sourced materials. And keeping true to this pioneering spirit, Jiri designed his family’s diminutive cottage in a way that others could easily replicate. Showing true commitment to the cause of alleviating our worsening housing affordability crisis, Jiri has made the plans available free of charge for anyone to use; they can be requested via his website www.lev.archi.

For the designer of such a modest but effective little home, Jiri is an architect with some big plans that may just help change our understanding of what eco-effective housing can be. 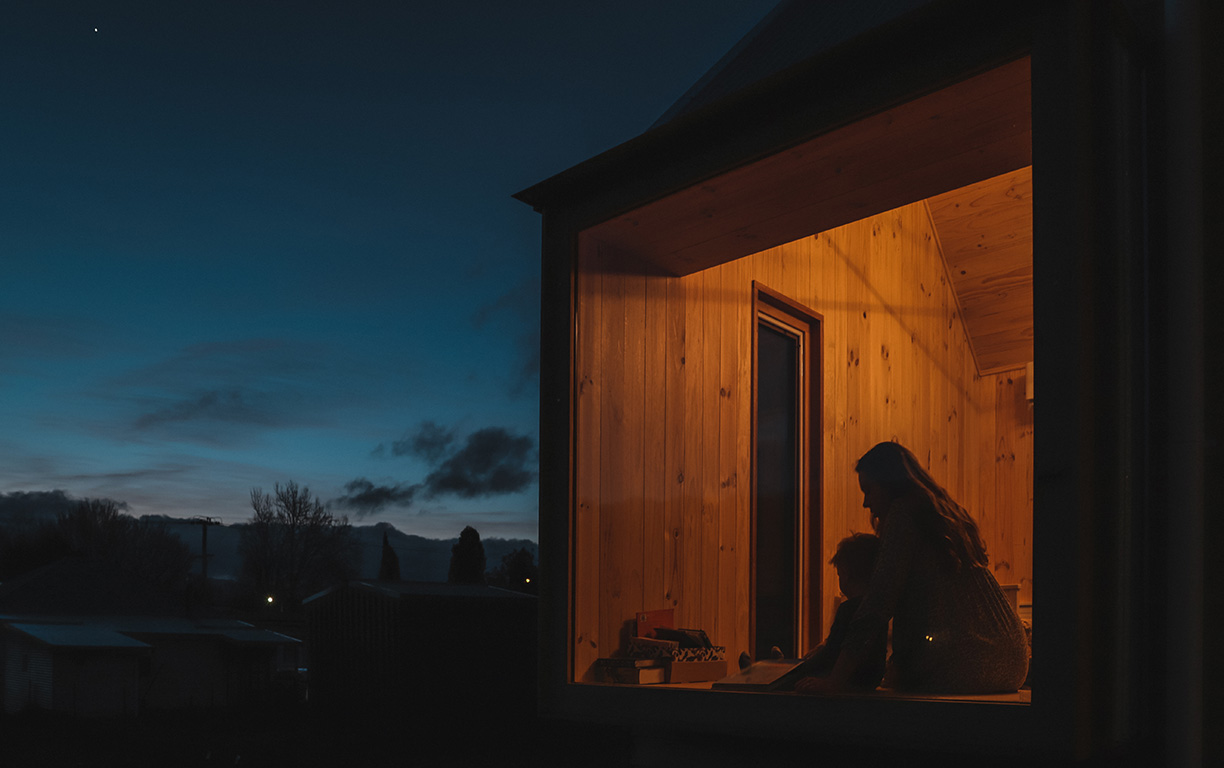