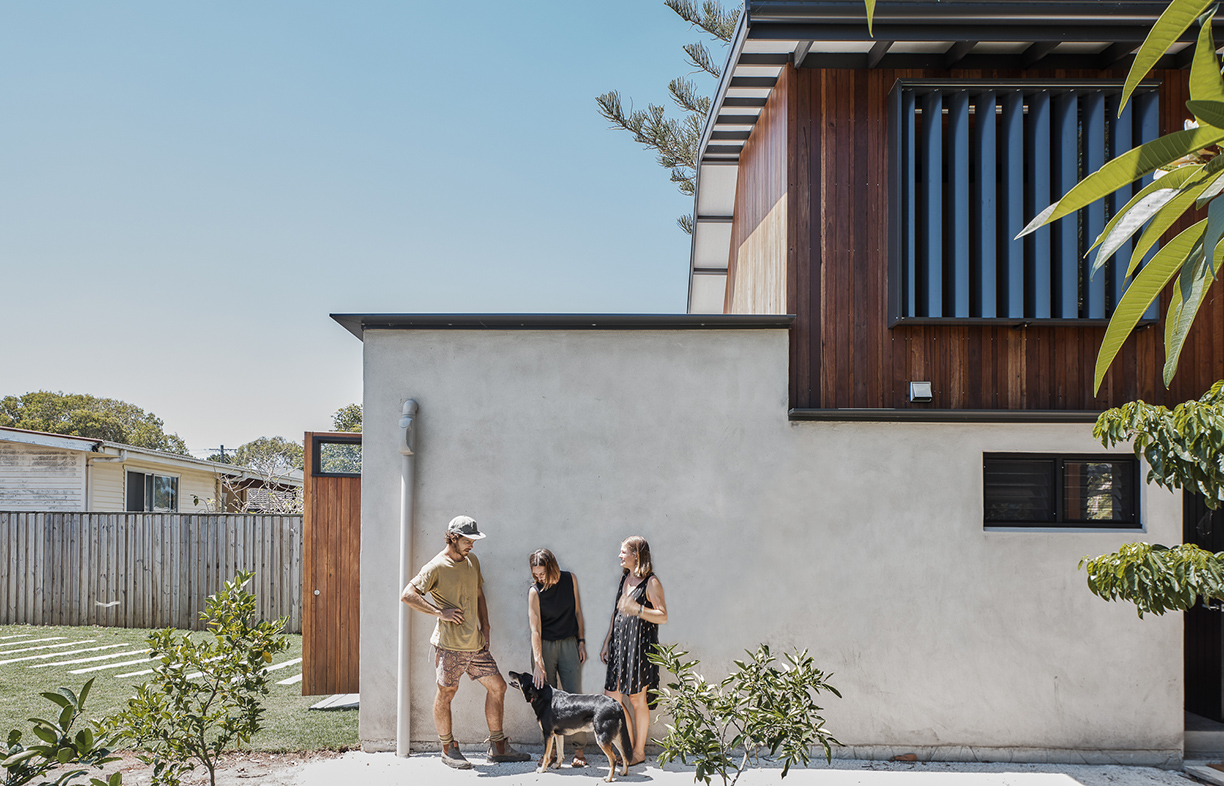 “The brief was to design a flexible space that could adapt over time with the family’s needs.”

Joel and Danni Turner, with architect Nikki Mote, experimented with hempcrete for a compact studio to finetune the design and build for their future family house.

Hemp fibre has been valued for its strength and versatility for thousands of years. As a construction material, hemp (when mixed with lime and water) offers insulating qualities, provides thermal mass, regulates indoor humidity and reduces damp and mould. Wanting a home with these inherent attributes, Joel and Danni Turner used hempcrete as the building block for their studio.

Joel and Danni moved from Sydney to Byron Bay where they bought an old fibro beach house, adopted a rescue dog, Franky, and now have a young boy, Sonny, and a new baby. The couple will renovate the house in the near future and have built a studio at the back of the property to live in while they do. Danni’s sister, Nikki Mote, an architect based in Freshwater, designed the studio, and Joel built it, taking the opportunity to experiment with sustainable materials and hone his building skills. “The brief was to design a flexible space that could adapt over time with the family’s needs,” says Nikki. This includes as accommodation for guests or tenants; as a workshop for Joel or a physiotherapy studio for Danni; and as a garage should they sell the property in the future.

Joel – an environmental scientist – wanted to use hempcrete for the studio (and house) having done a hemp workshop.

“We have such humid summers here and the old fibro house has a lot of damp issues. With young children the moisture regulating property of hempcrete is valuable for indoor air quality and creating a healthy place for kids,” Joel says.

Nikki designed the compact 58-square-metre studio with a hempcrete base, and a lightweight timber box on top. Large pivoting glass doors open to a north-facing deck, and an operable skylight and double-height void over the kitchen brings in light and makes it feel more spacious. A south-facing window and east-facing louvres allow for light and cross ventilation upstairs. (There is reduced glazing to the west as a requirement of the brief.) 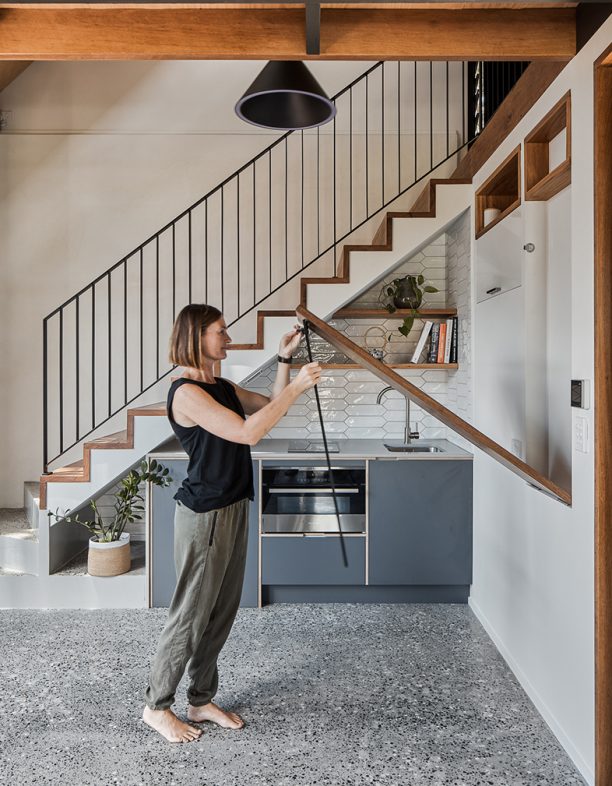 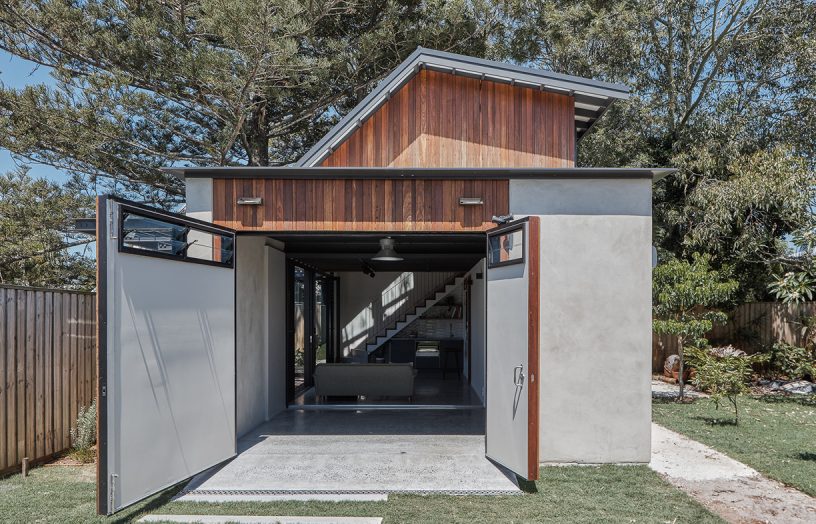 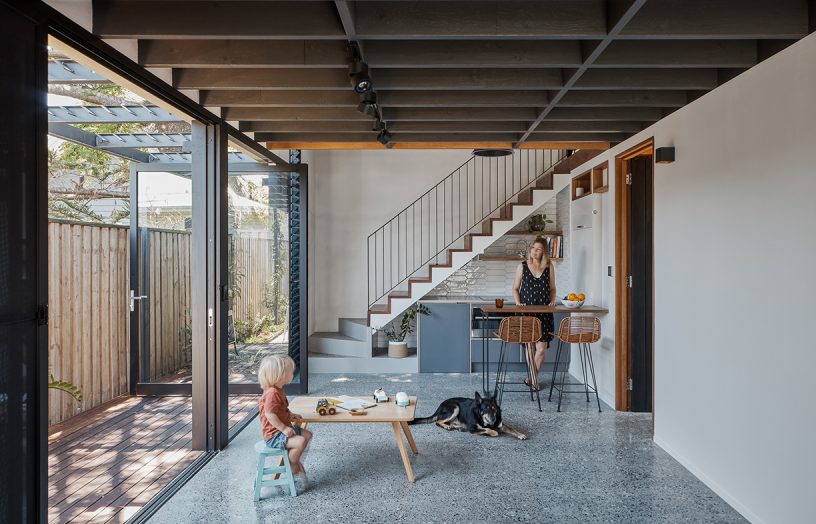 Flexible design was key to making this 58-square-metre studio work well. A sense of space is created with high ceilings and a mezzanine bedroom. And although the building is set just 1.5 metres from the northern boundary, there is still space for passive solar gain and a small courtyard.

The ground floor is designed for flexibility, adaptability and longevity. “Maximising the space for various uses was one of the driving design factors,” says Nikki. A sliding wall provides this versatility. It can be closed to cordon off a workshop or physio studio, or opened to allow for a larger living space. In the future, a wall can be inserted halfway through the plan to create a garage at one end.

The kitchen joinery is tucked into the alcove under the stairs, and Joel designed and built the table that folds neatly into the wall. There is a bathroom and bike shed to either side of the front door and the bedroom upstairs has a recycled-timber bench seat that wraps around the window.

This is the first house Joel has built, although he has always been around building. Constructing the hempcrete base took six days with the help of two carpenters and the aid of friends for tamping. Joel describes it as labour intensive and a tough material to work with due to the lime binder in the hempcrete, which is hard on the skin and means masks are needed. He also found it could be tricky to pack around and above windows.

“It’s best when simple, and it was a good test that will inform the next house,” Joel says.

This also applies to the light clay render that coats the interior walls. Joel and Danni have finetuned the mix so that the hempcrete’s natural colour and texture will be left exposed, as it is in the bike shed. However, the clay render has its benefits. “It is nice to work with,” says Joel. “It’s a workable, flexible material and if anything happens you can mix up a little bit of render and sponge it on.” Lime render on the exterior walls provides waterproofing and protects against the corrosive salt air.

Joel used recycled materials as much as possible, including timber cladding and feature doors, as well as timber doors from his mum’s house. When local trades found recycled timber difficult to work with, he sourced Accoya from plantation pine. “I feel it’s the next best thing in terms of an ethical product,” says Joel.

Designing and building the studio has served as a testing ground for what will be the three-bedroom main house. Nikki is adapting the lessons learnt from working with hempcrete into the design, and Joel enjoyed the build so much he’s now working with a local builder a few days a week refining his skills. 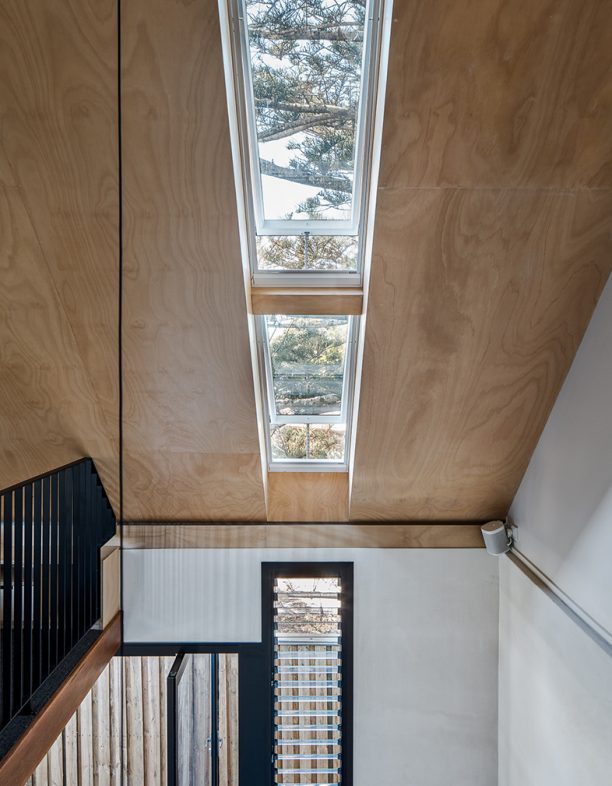 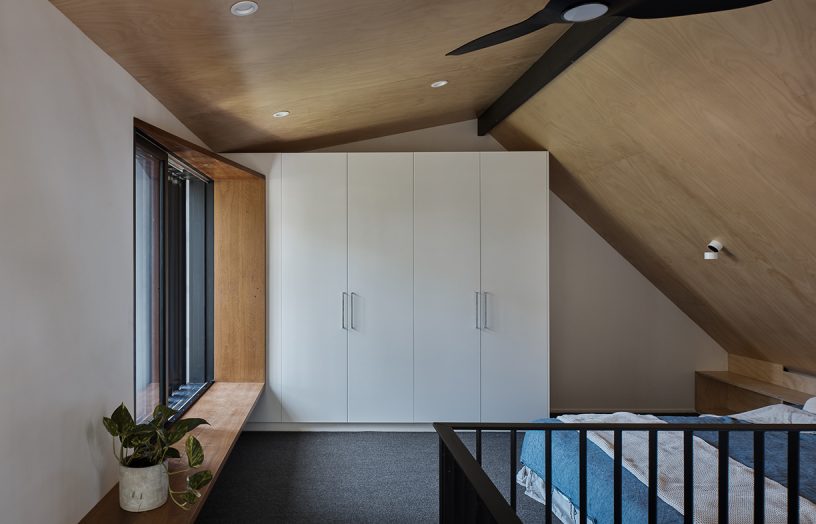 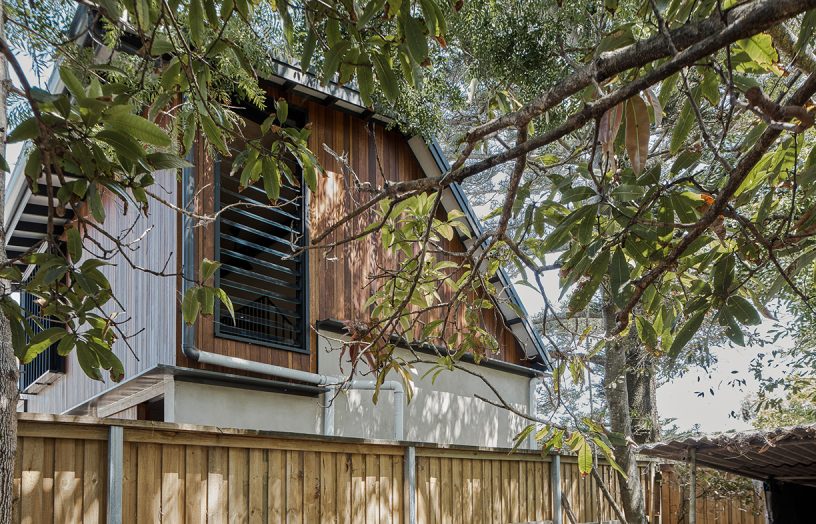