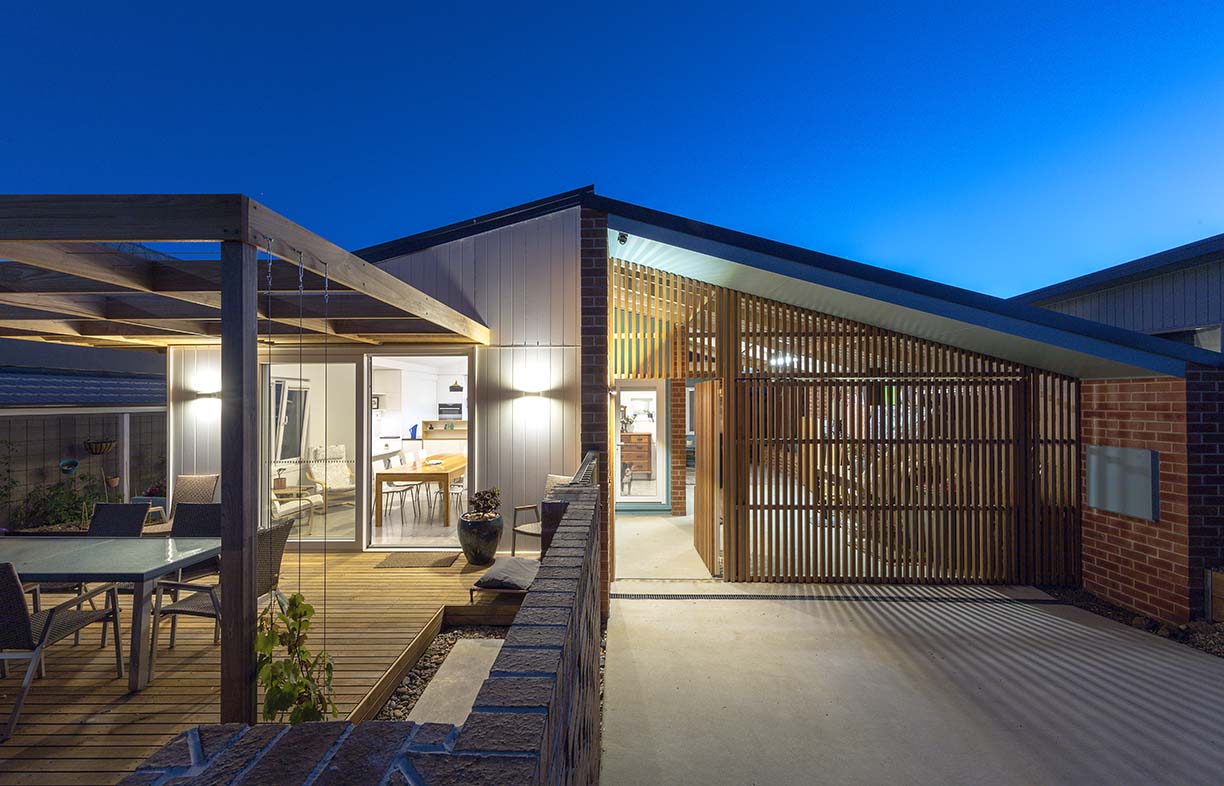 Making the most of a tricky narrow site with the street to the north, the house's kitchen and dining area opens to a generous deck with a shady pergola. The well-insulated house is clad with Weathertex and standard clay bricks.

With standard materials, a modular design approach and careful attention to detail, this Canberra couple have created a high-performing family home that’s a haven in the suburbs.

Five years ago, Jenny Edwards and her partner David Dufty set out to build a home that would serve as an oasis for their family in the middle of a new high-density suburb in Canberra’s south-west. At the time, both were living in underwhelming and unhealthy rentals, and felt they could do better for their blooming partnership.

Jenny, a building scientist and the founder and managing director of ACT design outfit Light House Architecture and Science, was uniquely qualified to execute this vision. Her company specialises in homes that are designed and built to exacting standards, make the most of their surrounds and keep energy use to a minimum.

With her own home, built on what she describes as a “tricky” narrow block with the street to the north, Jenny wanted to demonstrate that not only can good design create a comfortable and energy-efficient home nearly anywhere, it can do so while using affordable everyday materials and building techniques.

“I really wanted to prove to people that standard construction methods and materials can achieve great things. You don’t have to rely on expensive new gadgetry or finishes or mega-insulation levels to achieve good performance,” Jenny says.

She set out to create her dream home by tweaking the shape of the house to make passive solar design possible on the block. To that end, the open plan kitchen and dining area faces the street, with a sliding glass door providing access to a large deck with an eating area. Vine-covered pergolas surround the deck and front window, providing shade in the summer. 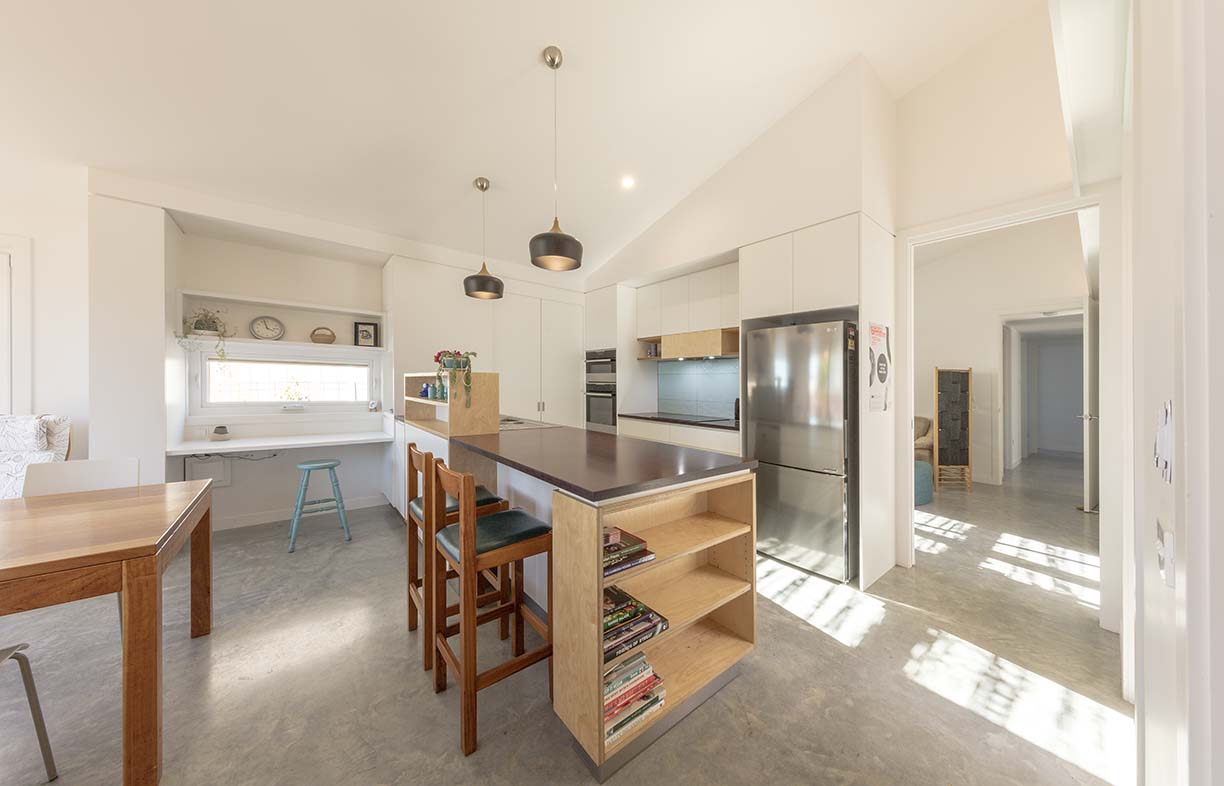 Careful attention to detail during the design and construction means that the house is remarkably airtight given its standard construction; it was tested at just 3.2 air changes per hour.

The home was designed to soak in every last bit of sunlight coming from the north in winter, and two of the three bedrooms and David’s home office were ‘popped out’ from the rest of the house to allow for north-facing windows. On the west side of the house, the office looks out on a small courtyard and an expanse of sky, making it one of the couple’s favourite rooms in the house. “David’s got a visual connection to the north and the winter sun penetrates right into the study,” Jenny says. “It is a beautiful place to be.”

Jenny’s son’s bedroom peeks out from behind David’s study, while the couple’s bedroom is similarly ‘popped out’ on the house’s east side. “Even though you’re on a tiny block in the middle of the suburbs, you’ve got this incredible connection to the outdoors and the sky, which makes the space feel so good,” Jenny says.

The design also makes the most of the small footprint by creating spaces with double purposes. The couple’s parents and grown children often visit, so David’s office doubles as a fourth bedroom, while a nook in the dining room serves as an office for Jenny. The carport expands the area available for outdoor entertaining.

The house was built to Jenny’s specifications with largely standard materials chosen for their durability and affordability. The frame is timber and insulated with fiberglass batts. External walls are clad with either clay bricks or Weathertex, a product made from timber and a small quantity of wax for increased durability. The roof is Colorbond and the floor is a burnished concrete slab. 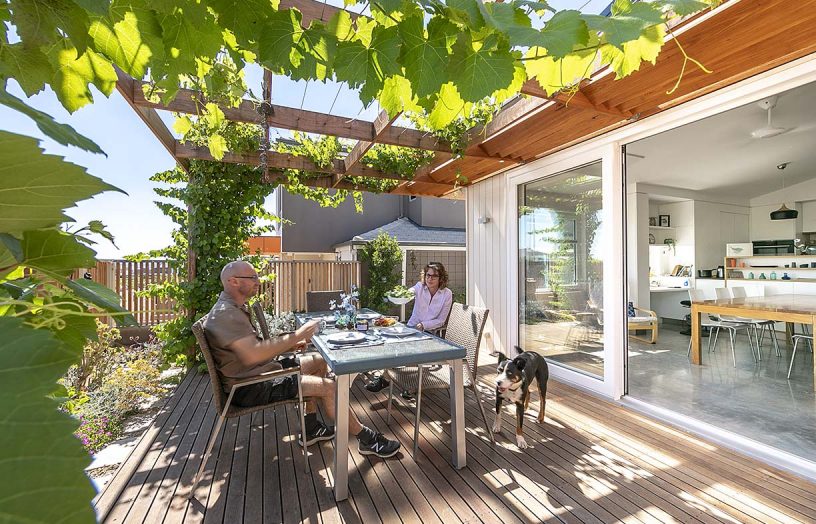 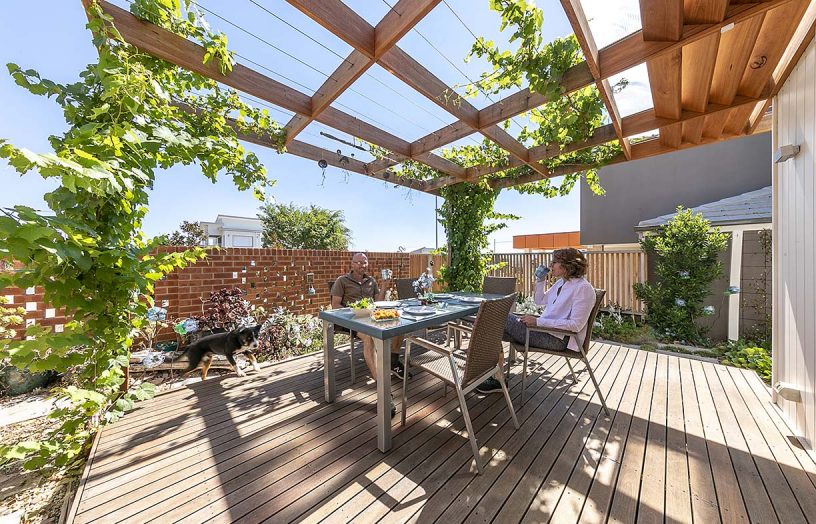 Deciduous vines designed to provide summer shading are growing up nicely over the pergola. Angled slats closer to the house let in winter sun and block unwanted hot summer sun.

Jenny also employed the modular technique her firm uses on many of the houses they design. With this approach, the room sizes and shapes are standard while their arrangement, the roof form, eaves and window placements are unique. Piecing together these ‘modules’ into floor plans to suit the opportunities and challenges of each block lowers the cost of bespoke design.

There are a few special touches that Jenny added to increase the home’s sustainability and experiment with new techniques. The home’s slab uses Cupolex recycled plastic domes which reduce the amount of concrete needed. In addition to regular fiberglass insulation, some of the ceilings include phase change materials (PCM) to increase the home’s thermal mass. And an experimental fan system takes heat from inside the roof space down under the slab (to a sealed void created by the Cupolex domes) for additional warming in the winter.

Jenny made efforts – including mostly forgoing hanging lights to avoid perforating the ceiling – to keep the home as airtight as possible given its standard construction. These choices paid off with an airtightness rating of 3.2 air changes per hour. “That’s pretty good. There are not many unwanted draughts,” David says.

The all-electric home, which achieved an impressive 8.2 Star energy rating, has no solar PV due to its orientation and a neighbouring two-storey home. “We could have installed PV to tick the box and say to everyone ‘we’ve got solar panels’ but that’s not what we wanted,” David says. “We would have known it wasn’t really working as well as it could.” Instead of installing their own system, Jenny was excited to get involved in Australia’s first community solar farm, SolarShare, where they were seed investors. 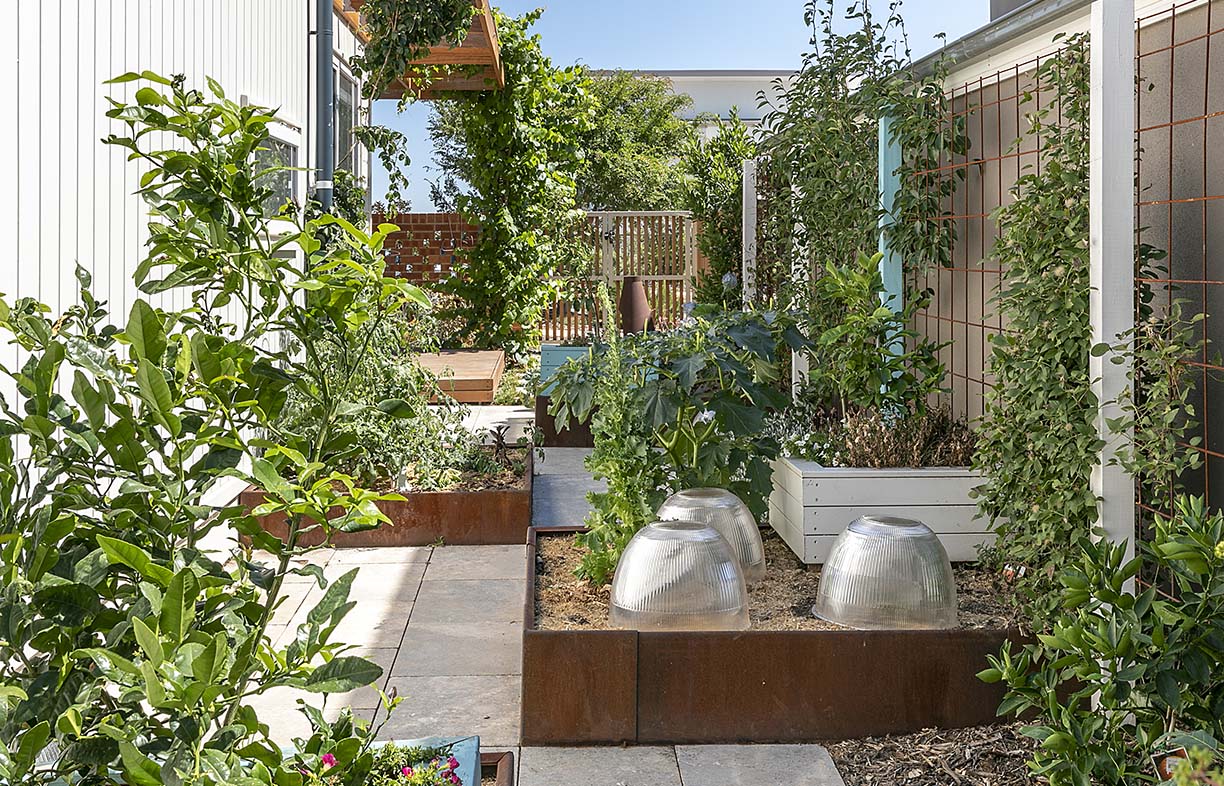 A productive garden is squeezed around the sides of the house, with raised vegie beds and over a dozen fruit trees.

Jenny, a trained scientist, hasn’t stopped learning from her home after finishing construction. After moving into the house in 2016, the family embarked on a three-year experiment in how to most efficiently heat the space (see Renew 149). The first year, the family used almost no heating other than two 600-watt far infrared heating panels, one in each bathroom. The second year, they used additional far infrared heaters in the living areas. The third year, they installed a Daikin US7 reverse-cycle split system in the lounge room. Interestingly, they found that they used even less energy with the split system than they did the first year without much heating. And in a testament to the home’s design, the temperature was consistently 20 degrees warmer inside than outside, regardless of heating method.

The Daikin split system is working well for cooling too, even in this brutal summer. “We had a 41 degree day yesterday and I had 25 people in the house for a Christmas party and it was beautiful,” Jenny said in late December.

They aren’t finished experimenting. Jenny says she’s currently considering options for filters for their heat-transfer fan system to protect against the bushfire smoke that’s plagued Canberra this summer. And due to the home’s relatively large amount of glass on the east and west sides (because of the block shape), David says that they are considering additional external shading options.

But though they enjoy tinkering, most of the time, Jenny and David are perfectly content in their “Canberra beach house.”

“I wanted it to feel like a little escape, a haven, and it does,” Jenny says. “We joke at times that it’s such a cool place to be that we actually feel less motivated to go away.”