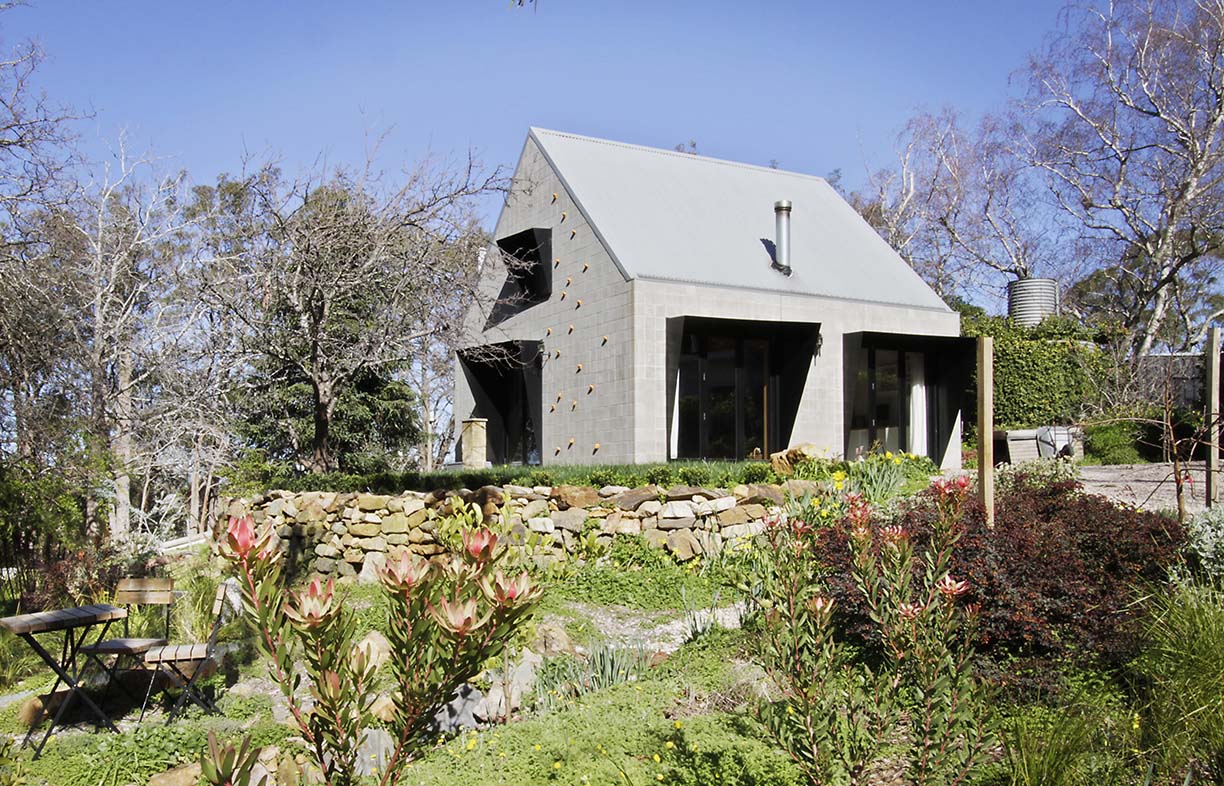 Two young designers combined their skills and knowledge to create and build this modest home for themselves in the Adelaide Hills, without having to give up avocado toast to pay for it.

Landscape architect Isabella James and architectural graduate and landscape architect Jesse Zilm have bucked the trend that sees Generation Y struggle to get into home ownership (and famously – and unhelpfully – being advised to pass up expensive cafe breakfasts to afford it). Their story offers inspiration for others in a similar predicament.

Together Jesse and Isabella run A-HA! Design Studio, a holistic design practice that works with clients on sustainable solutions that integrate buildings and landscape. Their own home and studio is testament to what’s possible with a small budget and a big idea, and a willingness to pick up tools.

Originally, the couple looked for a house to buy but, unable to find something suitable, they decided to buy land and build instead. “Jesse was 24 and I was 25,” recalls Isabella. “We were both working in small practices on the Adelaide plains and we were pretty fresh, and that enthusiasm drove this project.” 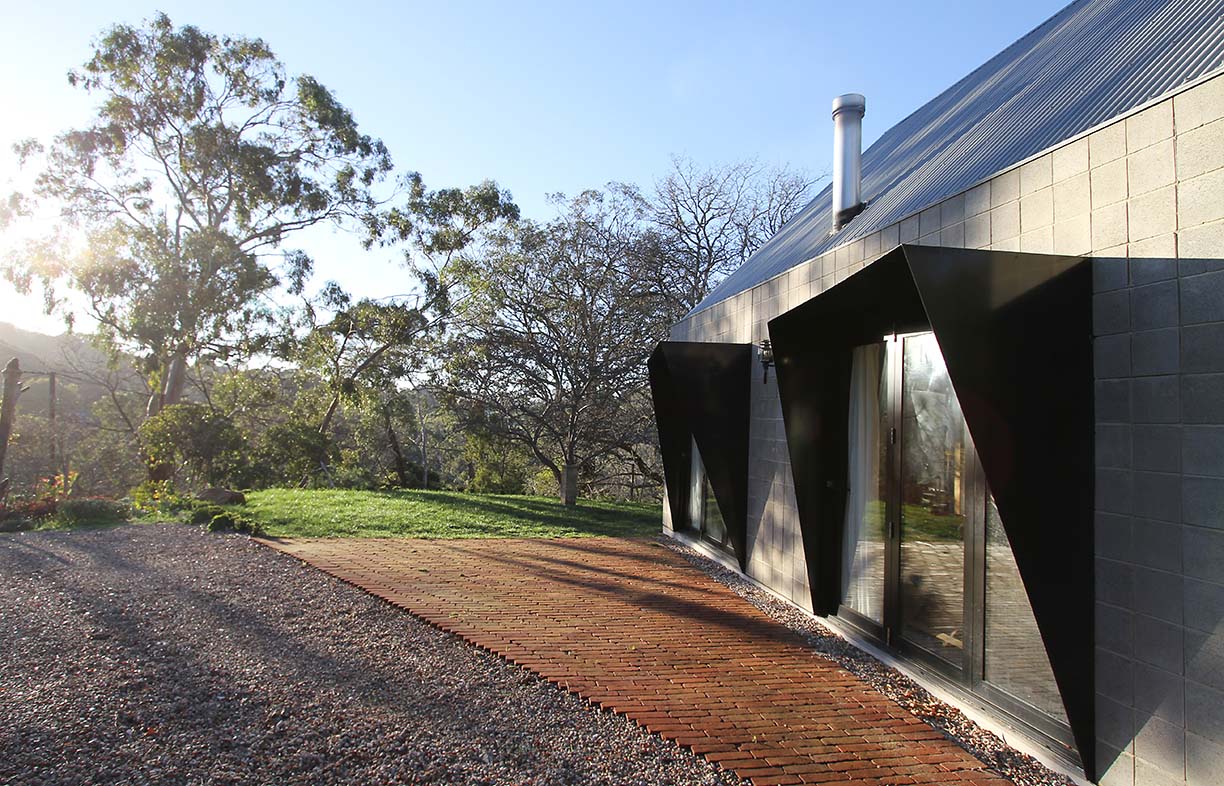 A subdivision from an established home in the Adelaide Hills, Jesse and Isabella's block boasts a mature garden. Their home is built on the footprint of a double garage that was on the property when they bought it, and features a climbing wall on the eastern facade.

“It was very challenging, but also one of the most rewarding things I’ve ever done,” Jesse adds. “We learned so much by designing the house, putting it through council, getting our hands dirty and getting it built. It’s still pretty unusual for two girls to physically build something.”

The block they settled on – 1000 square metres of mature garden, subdivided from an established home in Crafers West – was appealing for several reasons. “The land is a quarter-acre block, which is the typical Australian dream, but we wanted to utilise it in a different way,” Isabella says. “The average new Australian house is 230 square metres, but there was a double car garage on the site when we bought it, and we aimed to build a house on that same small footprint so that we didn’t encroach on the landscape.

“The block is beautiful because it’s in the hills, and we have an English style garden with old rhododendrons and camellias and lots of big established trees,” she continues. “As landscape architects, we could see great bones and that there was so much there to work with.”

Designing the house to fit the garage’s footprint of just 48 square metres helped to keep overall costs down, and produced a space comparable in size to a one-bedroom apartment. It has separate zones for cooking, bathing and relaxing, and a mezzanine bedroom accessed via a spiral staircase. It’s perfectly adequate for the couple, who also run their design studio from home. 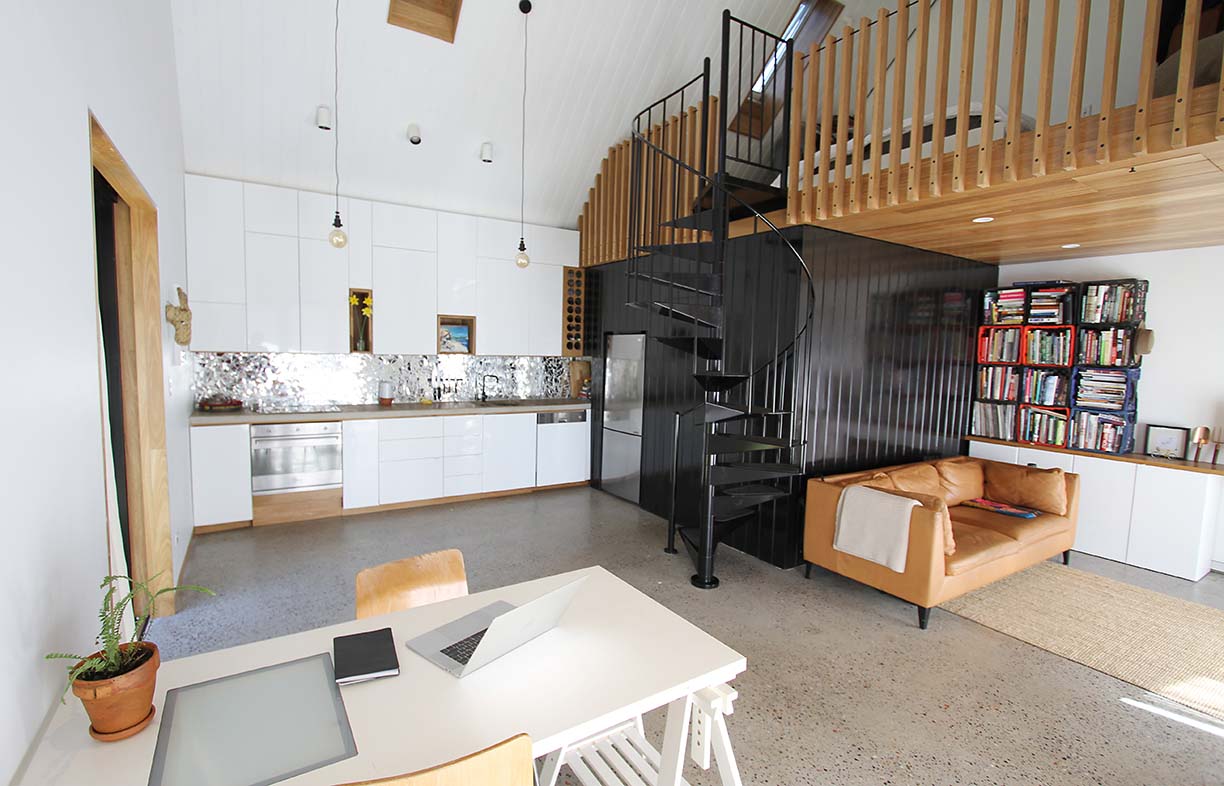 Inside, a cathedral ceiling and open plan help the small home feel spacious. A black cube in one corner houses the bathroom with laundry, and a spiral staircase leads to a mezzanine bedroom.

“You have to be the right person to live in a small house,” Isabella admits. “It’s been an experiment but it works really well. We are not constantly on top of each other. One of the key aspects of the design was to make sure the distinct spaces could be made private and to use the connection with the landscape to make the house feel a lot bigger than it is.”

“Because it needed to be affordable and highly practical, we used materials that were inexpensive but are often misrepresented,” Jesse says. “Take the Besser blocks: people see them as ugly, but we used them in a more interesting way for the external walls, and the result is beautiful.

“Our home feels very spacious because it opens to the northern aspect, and we have the double-height space and good natural lighting,” she adds. “It performs really efficiently too, because we have double glazing and the sun shines in across the floors in winter. In summer the custom aluminium window shrouds block the sun entirely. And we have great cross ventilation because the eastern breeze comes up the hill, and we can open up the house to clear out the heat at the end of the day.”

This project was obviously a labour of love – and blood, sweat and tears at times – with the design and approvals phase taking about one year, and the build another two years. The construction took longer than a typical house project because the couple built it themselves, learning techniques and detailing on the job.

“We decided to hone our skills and treat the build as if we were learning a craft,” Jesse says. “We did everything from digging trenches to laying reo mesh and erecting stud frames. We didn’t do the plumbing or electrical work, but we polished the concrete, and neither of us had ever used a drop-saw before we started this project. 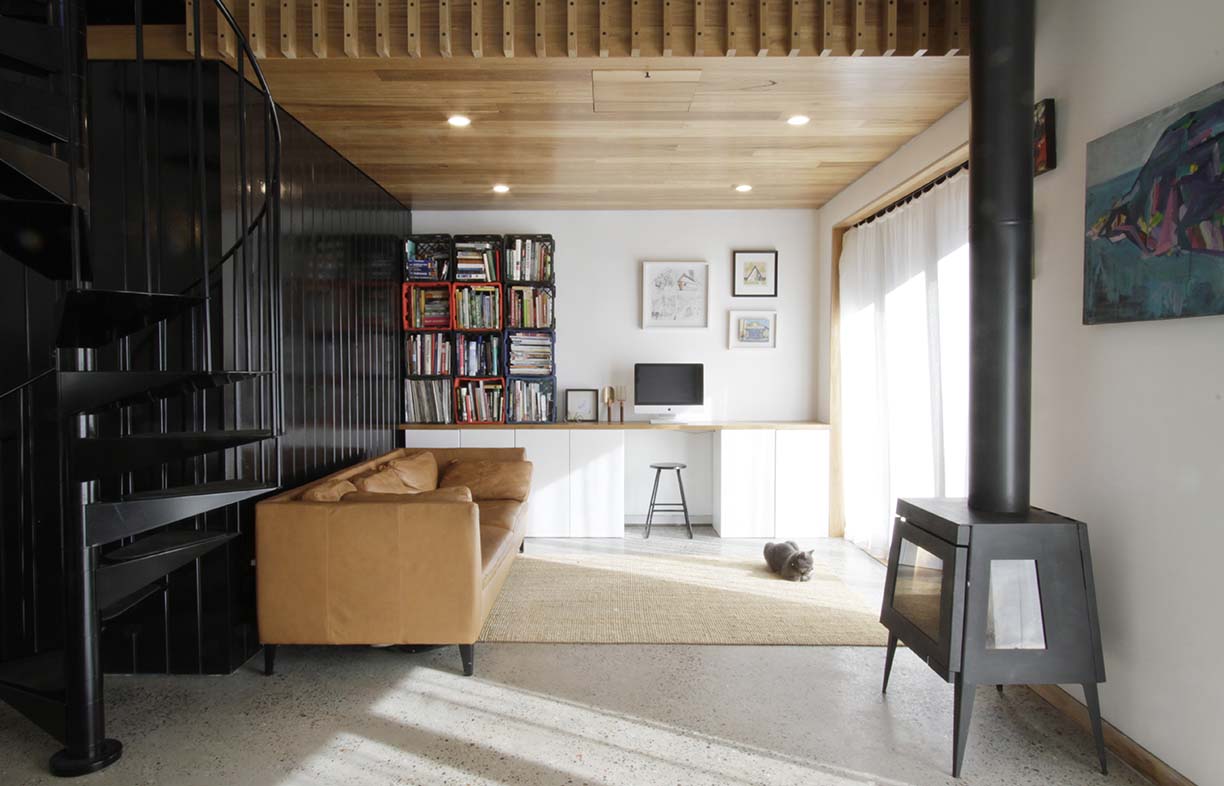 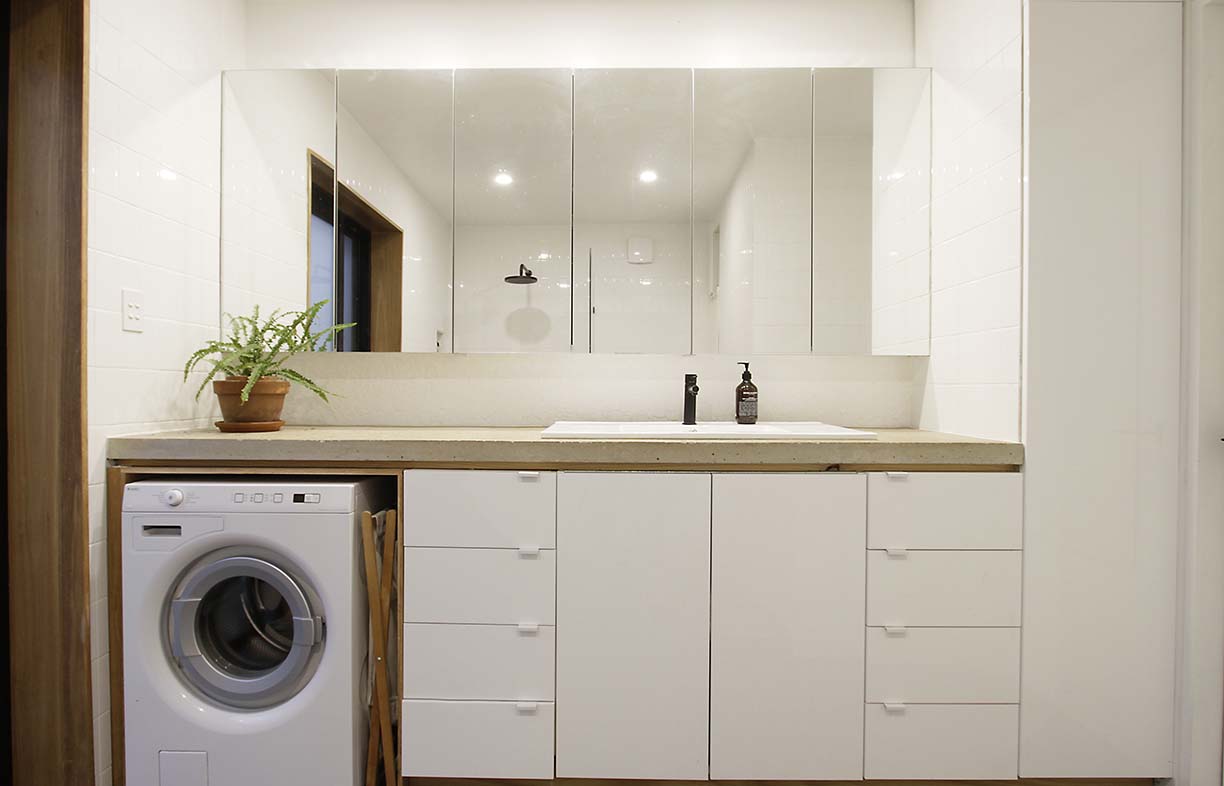 “We worked on it after work and on weekends, and we only bought materials as our pay cheques came in,” she continues. “We have a mortgage on the land, but we paid for the build ourselves upfront.”

“A builder around the corner lent us some tools, and we hired others; we watched a lot of YouTube videos and talked to contractors, getting advice from many people,” Isabella adds. “We didn’t want to design a sustainable building built from sticks and spit; it had to be high quality, and we used our design knowledge to make sure every detail was checked over for the best possible result.”

Their intimate involvement with the build extended to sourcing most of the construction materials within a 50-kilometre radius, including many recycled materials. “These range from the timber cladding on the ceiling to copper pipe that we turned into a toilet roll holder, and broken tiles that became mosaic features in the kitchen and bathroom,” Isabella says.

Now that it’s finished, the couple have turned their attention to the garden, adding drystone retaining walls and a vegetable garden, experimenting with new plants and espaliering apple and pear trees. They were even married on the property in October 2018.

“We live in a small house and eat from this amazing garden,” Jesse says. “It was always our intention that the landscape would be the prominent feature celebrated by our design, and the house would be nestled into that.”

So how did they manage to achieve this inspiring result without sacrificing avocado toast? It helped that during the design and construction phase, the couple lived with Isabella’s parents and that Jesse’s mother has an avocado tree in her garden. Which is not to say they didn’t make sacrifices along the way to afford the house, but both of them agree: the entire process was more than worth it. 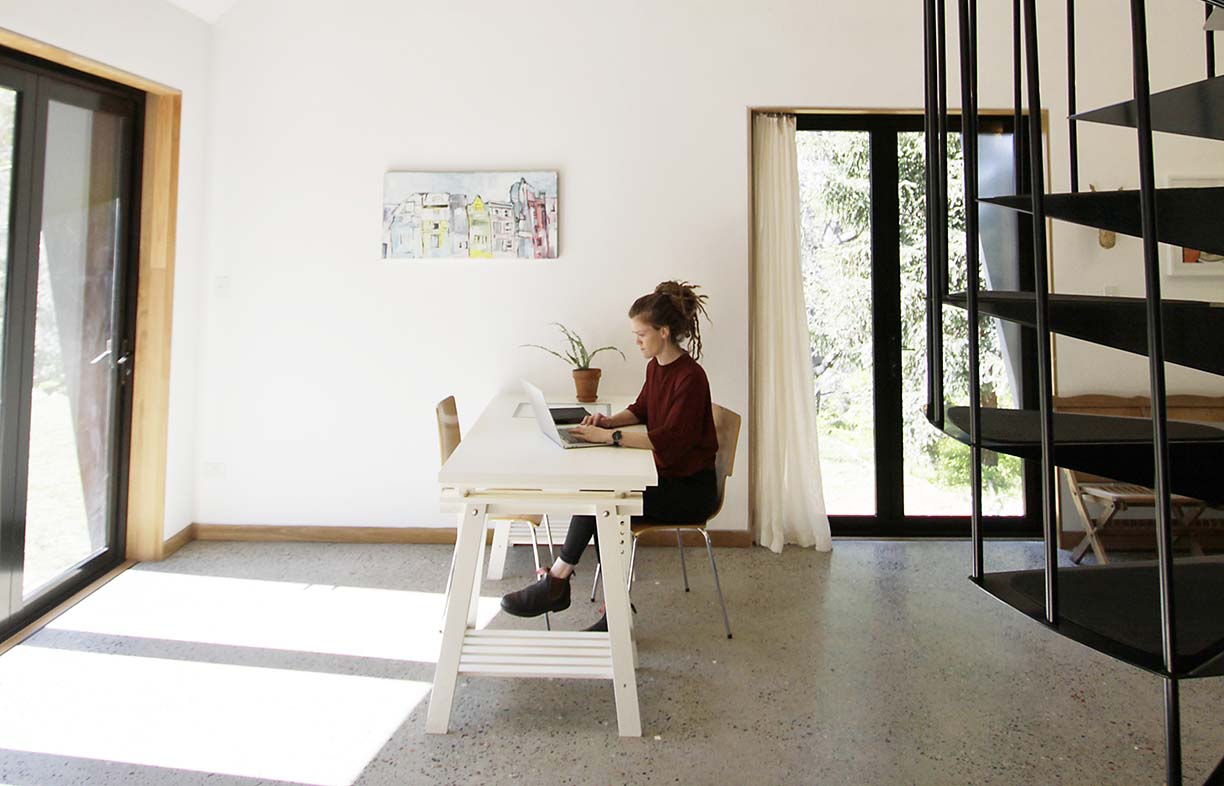 The couple run their design business from home.