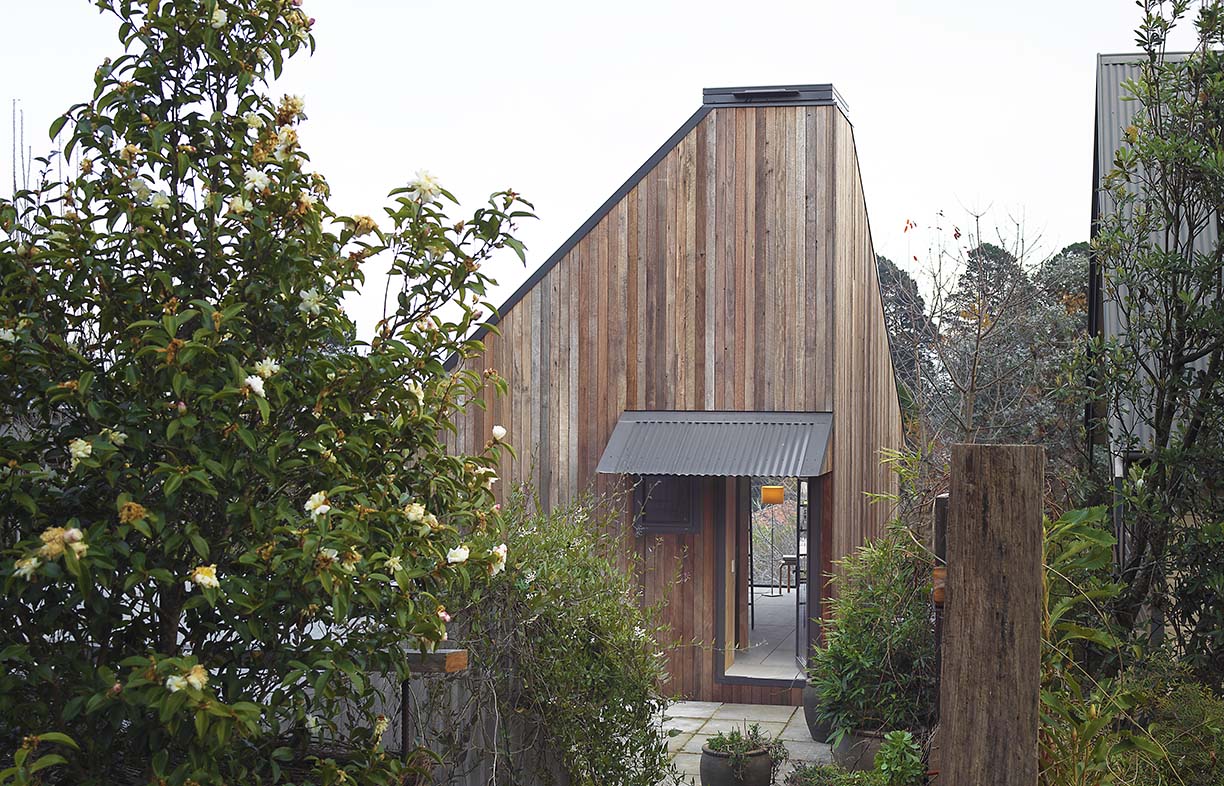 The studio is clad in recycled jarrah and karri timber, which will grey naturally over time.

The design of infill buildings can often be ordinary, focused on providing functional space and neglecting scale, sustainability and context. This backyard build in Blackheath in the Blue Mountains bucks that trend. Serving as an art studio and home office for Mandy Evans and Dr Christian Tietz, it is an admired addition to the streetscape and a prototype for a larger development project.

Mandy is an artist and art therapist and Christian is the director of Industrial Design at the University of NSW, where architect Jon King, director of Design King Company, also teaches at times. Mandy and Christian engaged Jon for the studio project, which formed part of a broader discussion about land use and housing. The couple have subdivided their 1300-square-metre property and want to develop half of it with a series of small, versatile, prefabricated buildings that share utilities and amenities. “It is an example of thinking about architecture as a collective exercise, and the studio is about making a small building operate well in a suburban context,” says Jon. 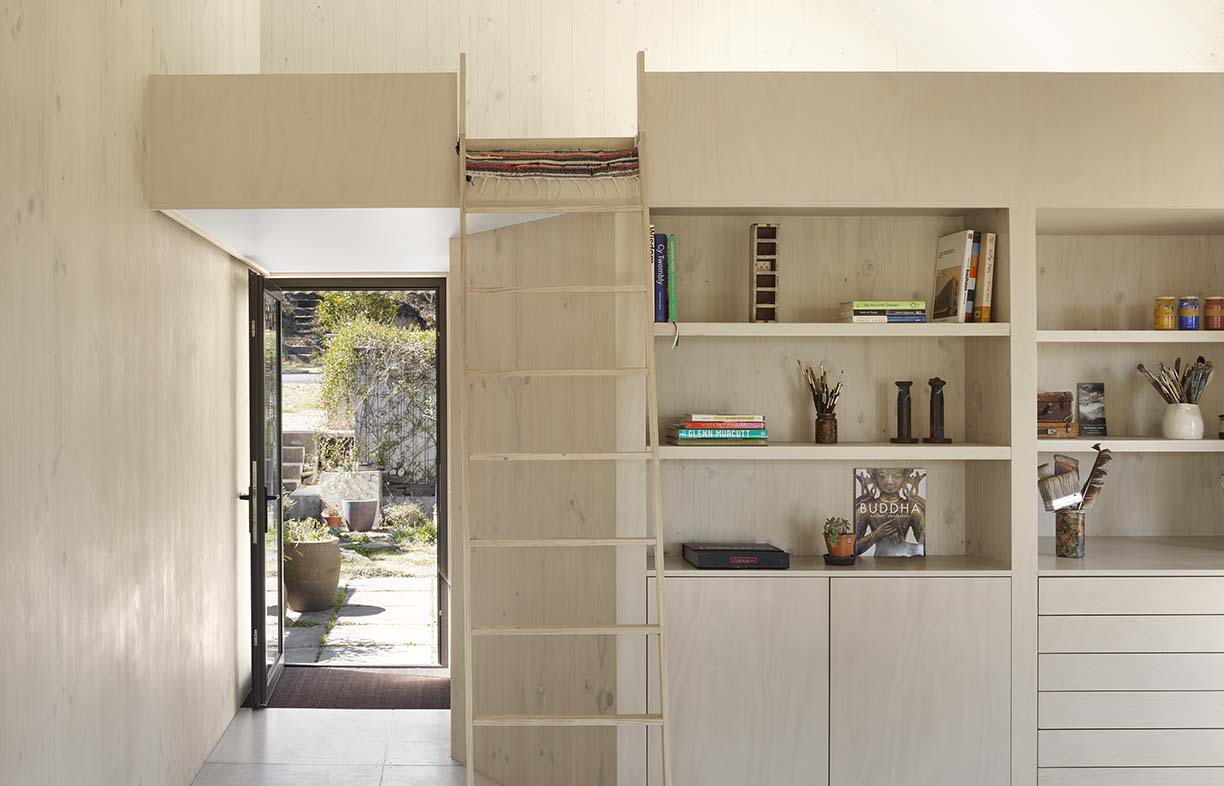 Blackheath is an historic suburb that sits at the highest point of the Blue Mountains with valleys and wilderness to either side. Older single-storey houses dominate the streetscape, with modest weatherboard and brick cottages from throughout the twentieth century. Many have gabled roofs like Mandy and Christian’s house, although their neighbour has a higher pitch and a second-storey extension.

Sitting between these two houses, the studio is designed to mediate the roof forms, improving the privacy for Mandy and Christian and maintaining the suburban scale. It has a compact 24.5-square-metre footprint yet offers 63 square metres of floor space across three levels. The ground floor is Mandy’s art studio with a mezzanine and the lower ground floor is Christian’s home office. There are two entrances, a kitchenette and two bathrooms, giving flexibility for a variety of uses. 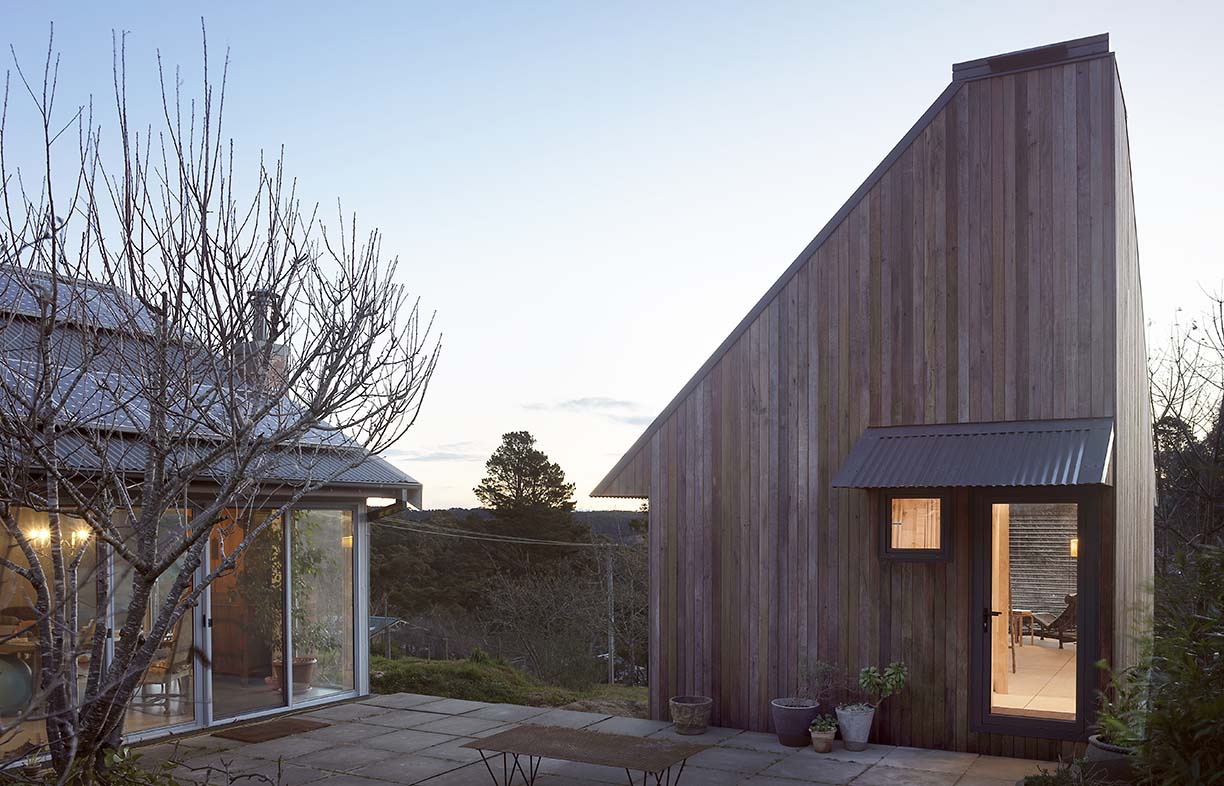 The studio sits next to Mandy and Christian's home on one half of their subdivided Blue Mountains block. They are planning a further development of the other half of their land.

Because it’s a small building, Jon took the opportunity to work with a new prefabrication technology that he started exploring as part of a competition following the Christchurch earthquake. The walls are made with CNC-machined cross-laminated timber (CLT) panels that provide both the structure and interior lining, and offer efficient, fast and economical construction. The tradespeople who built the studio had not used the method or material before and constructed the studio in two days, and Christian says it could have been done in one.

The lower level of the building is dark rendered blockwork, embedding the building in the sloped site and providing a base for the upper volume. Clad with recycled timber, the studio will age gracefully, sitting naturally in its suburban and wooded environment. “The building is very quiet and inconspicuous when you walk up the street,” says Christian.

The rear of the studio faces west towards the Kanimbla Valley and consequently receives strong afternoon sun and westerly winds off the range. Large double-glazed windows with thermally broken frames provide insulation while taking advantage of the view, and eaves and external blinds provide protection from the summer sun. 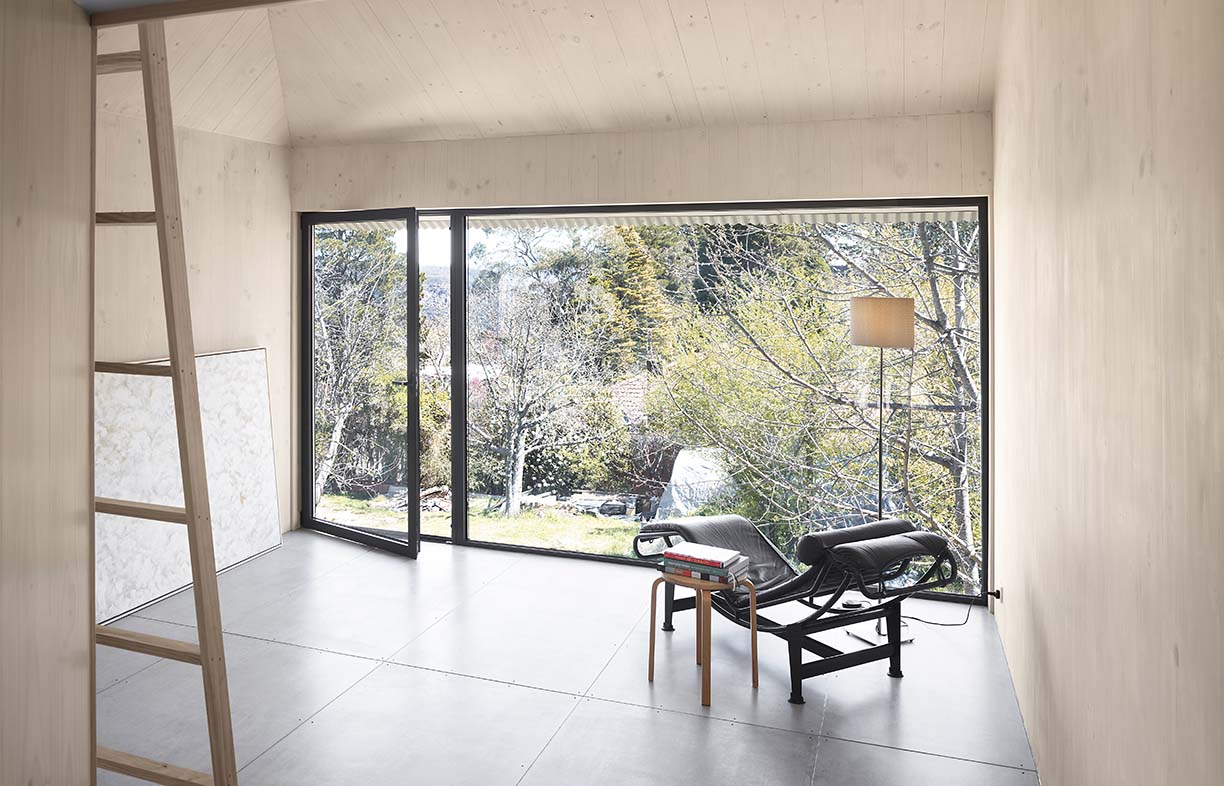 Double-glazed windows with thermally broken aluminium frames are a key part of the high-performing building envelope. The artwork, entitled 'Transience', is by homeowner Mandy Evans.

A skylight brings daylight deep into the studio, creating a church-like effect inside during the day and something of a candle-like effect outside at night. The skylight and raked ceiling also act as a thermal chimney in the summer, working in conjunction with cross ventilation to cool the interior. In the winter, hydronic heating and sand beneath the compressed fibre cement floor panels provide warmth and thermal mass.

Mandy and Christian wanted the studio to have an artistic look and feel. Inside, the CLT panels are exposed and whitewashed, and Mandy says when the light comes in “it softens the edges and has an ethereal glow.” The timber also evokes a cabin-like feel, providing a comfortable and inspiring atmosphere for art and art therapy. Christian likens the effect to Terunobu Fujimori’s mobile tea house which they visited while it was exhibited at Museum Villa Stuck in Munich in 2012. “The experience of the space is transforming and it opens up your imagination,” he says. “That is architecture at its best, because it helps elevate the ordinary into the extraordinary.” 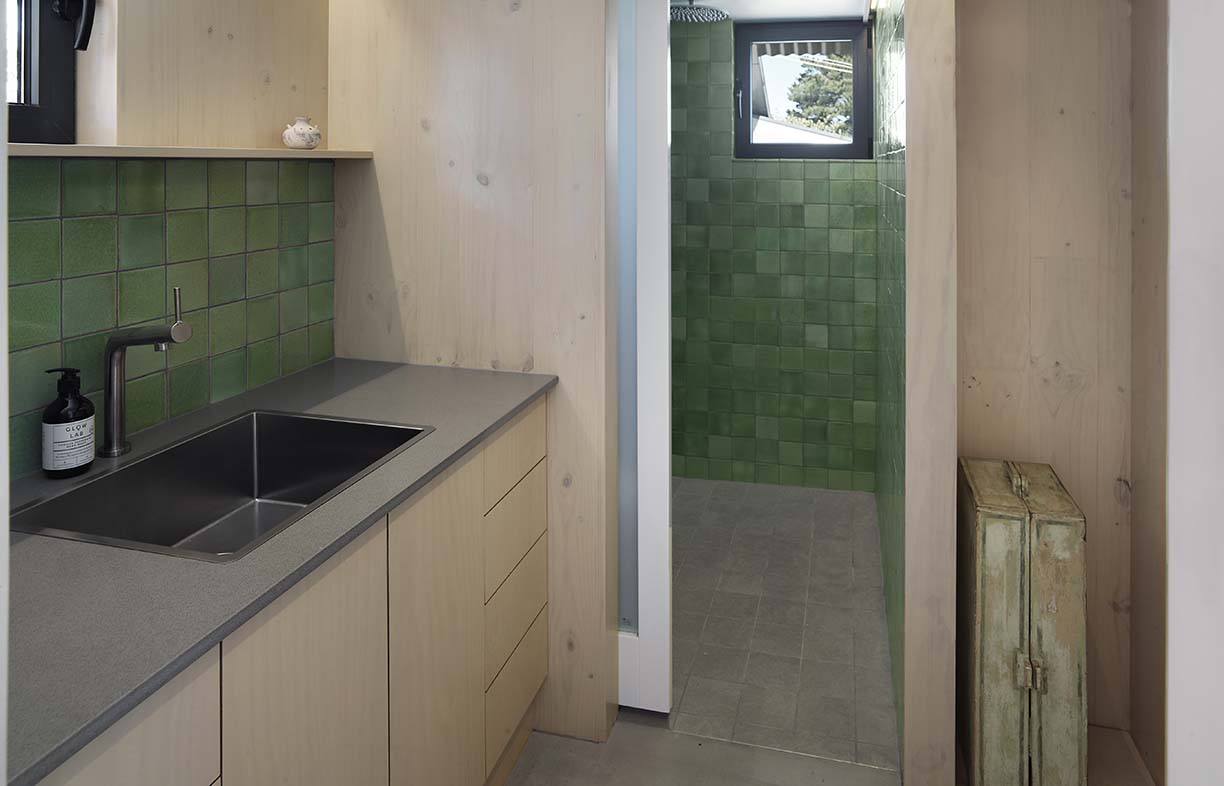 A small kitchenette and bathroom are tucked under the mezzanine. 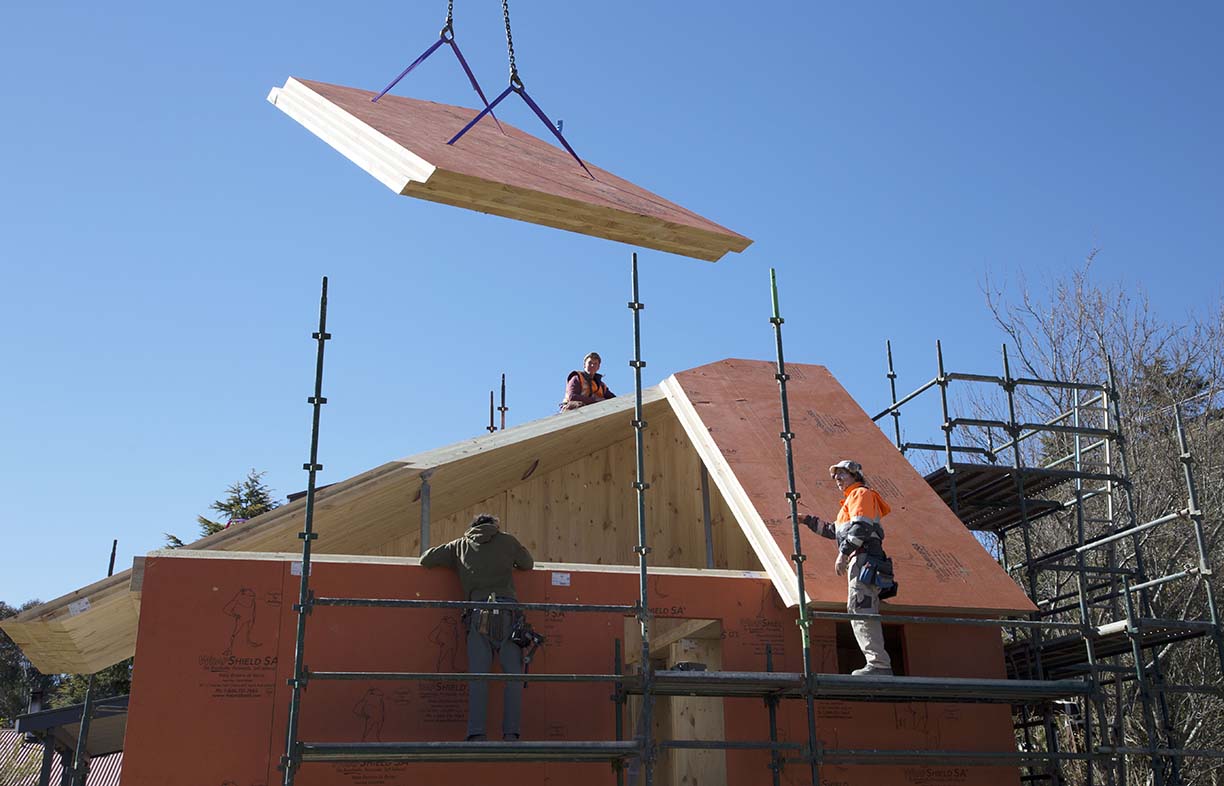 Indeed, the studio demonstrates that infill buildings can be economical, efficient and sustainable, while still being far from ordinary. And as a prototype for one strategy to increase suburban density, the studio provides a versatile, adaptable module that can be used to create much richer land use not only on Mandy and Christian’s property, but on other suburban sites. “The site and studio were a perfect testing ground for incremental density increase in our suburbs and towns without disrupting visual or social context,” says Jon. “The land becomes much richer with smaller-scale units, and the integration of laneways and shared outdoor spaces.”