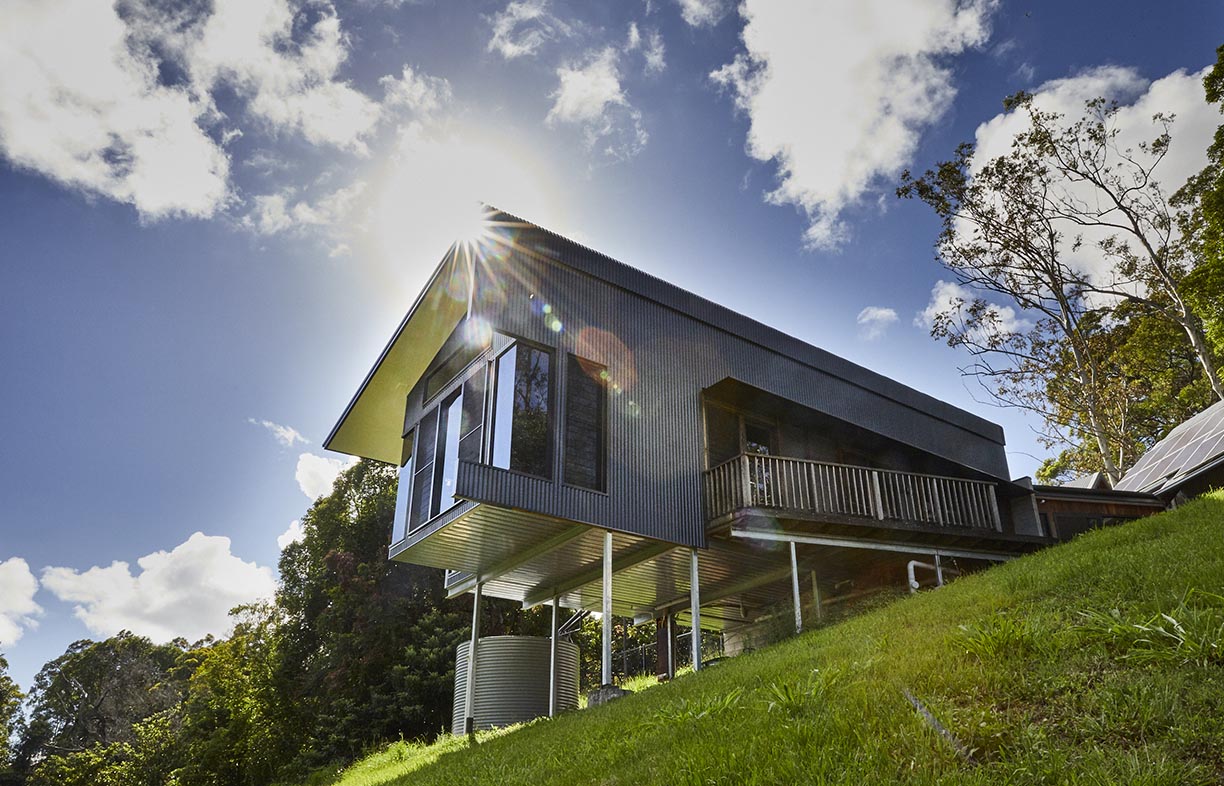 Chris and Jac staged the design and build of their eclectic off-grid pavilion house in the Gold Coast hinterland to manage the budget and adapt it to the changing needs of their expanding family.

Building a house in a staged process is a smart approach to managing budget and changing needs. It was just Chris and Jac when the couple bought their 11-acre property in the Gold Coast hinterland with the intention to build their first home, and they wanted something reasonably quick and simple to begin with. But they would soon be starting a family, so their house would eventually need to provide more space and amenity. “A two-stage build meant we could manage the budget and adapt the house to our changing lifestyle,” Chris explains.

The couple bought the block in 2014. It has an outlook across the Currumbin Valley and is the ideal orientation for solar access so they could live off-grid. They cleared five acres of overgrown lantana and spent several months observing and understanding the site to determine where and what to build.

In 2015, Jac and Chris engaged architect John Wilson to develop the overall concept and design and build the first stage. The finished house would comprise three connected pavilions; the first stage involved the building of two of them, detached and slightly skewed with respect to each other for optimum sunlight and views. The shed-like forms have gabled roofs and feature recycled and reclaimed materials. “We loved the aesthetics and sustainability, and they fit into the landscape and give a rustic, homely feeling,” says Chris. The western pavilion, with a carport and a bedroom, faces north so the solar array captures as much sun as possible. The eastern pavilion houses the kitchen with dining area, living space and a combined bathroom and laundry. 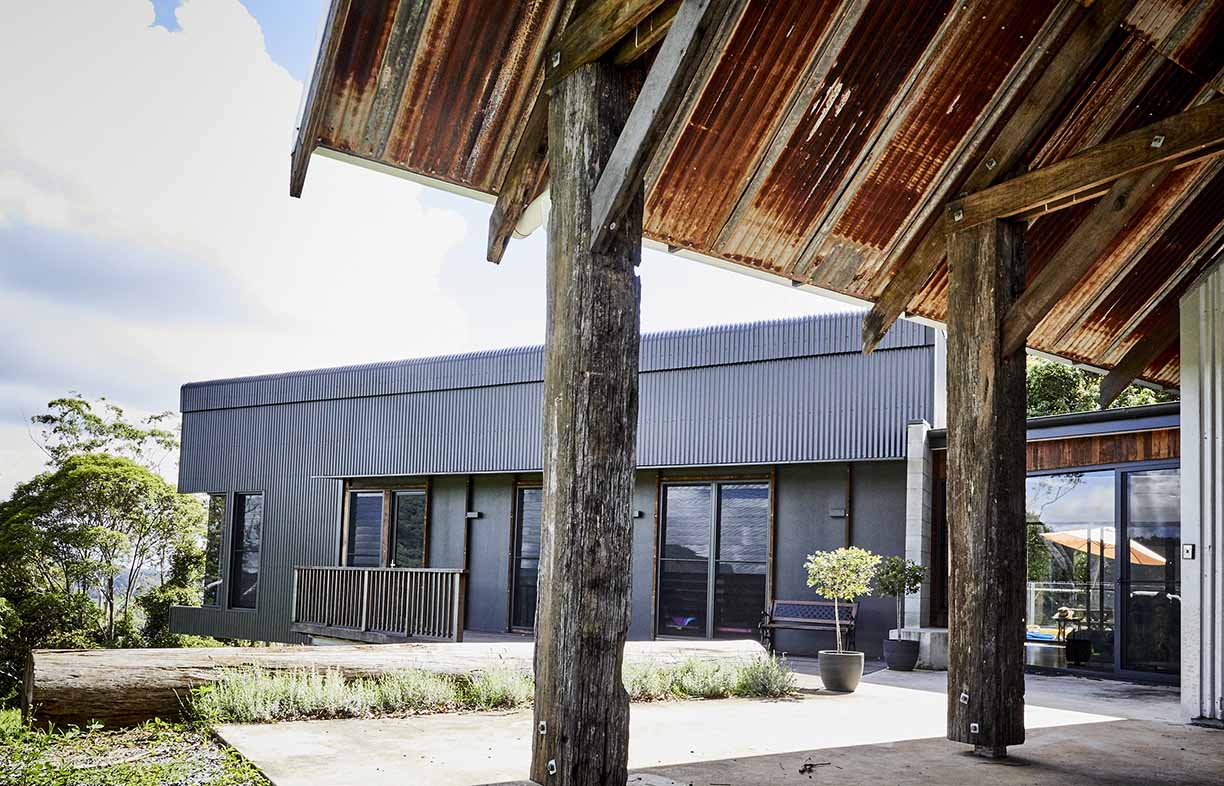 The sleek, modern Colorbond-clad pavilion that forms stage 2 of Chris and Jac's house build is a pleasing contrast to the rustic character of stage 1. The rolled, vented ridge cap along the western side helps to manage the heat load in summer, which was crucial to the success of the design.

The couple moved into their new home at the end of 2015 and had their first daughter in 2017. A couple of years on they decided it was time for stage two of the build: connecting the pavilions and adding a third. They brought on ptma Architecture to further develop the original concept and adjust it for their needs, comfort and budget. “Although we weren’t involved in the initial plan, most of our projects are designed to be staged in some way. It’s the nature of good design that a house should evolve to suit the ongoing needs of the owners,” says Peter McArdle, joint principal of ptma with his partner Teresa Wuersching.

The third pavilion, a bedroom wing, is a long rectangular box that projects dramatically over the sloping escarpment. It has storage underneath and a deck tucked in on the western side. Chris and Jac’s bedroom is at the far end of the pavilion where it has a spectacular view across the valley. “It’s like we’re sleeping outside. Looking out the window and seeing the scale of the landscape around us is breathtaking,” says Chris. A new room now connects all three pavilions and places the family living space at the core of the house. 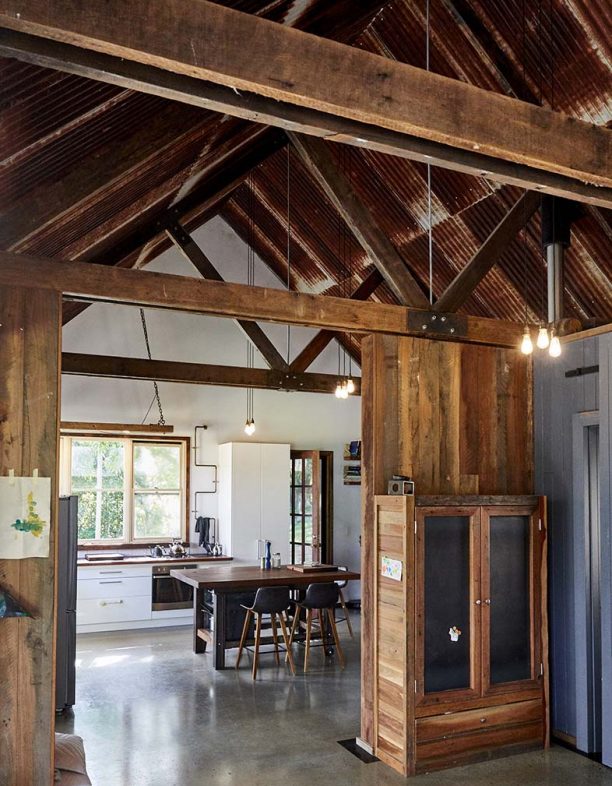 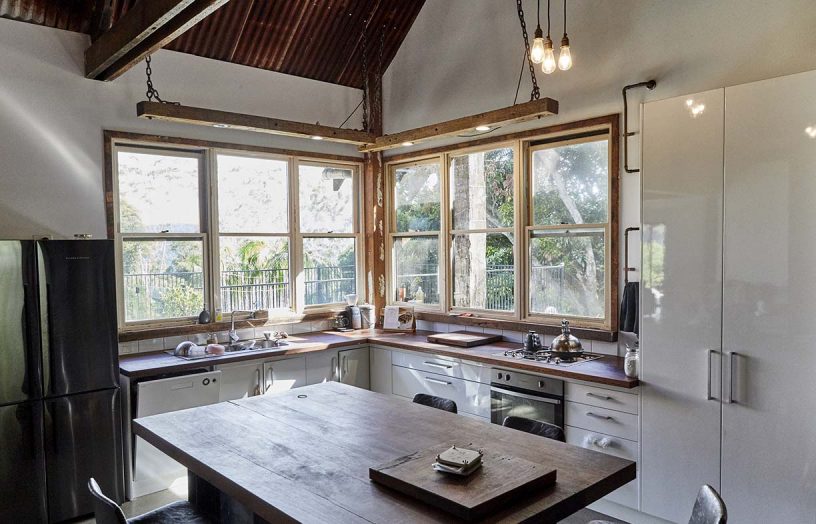 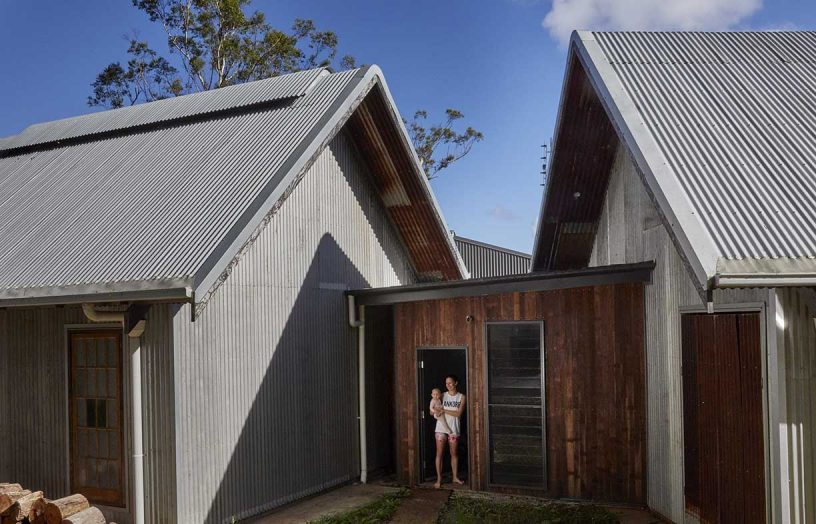 The two original pavilions are rich with the patina of recycled materials, including windows, doors, timber and corrugated steel. A new entry between these two pavilions leads to the living room at the centre of the house, with the new bedroom pavilion beyond.

In contrast to the original pavilions, the third is sleek and streamlined with clean, modern finishes – black on the outside and white on the inside. “It’s a house of two parts in terms of staging and finishes,” says Peter. The contrast accentuates the juxtaposition of the old and new and creates an appreciation for both in doing so. The new finishes are also easy to clean, with low-maintenance metal cladding, posts and soffits that comply with the BAL-12.5 bushfire rating of the area.

Managing the heat load of the western side of the pavilion in summer was crucial to the design. “The long black wall is exposed to the hot afternoon sun, so we used simple design elements to regulate the heat load and make it work in a positive and efficient way,” explains Teresa. A double wall allows the external skin and rolled ridge capping to vent warm air. High-performance glazing protects against the sun, and external screens (still to be added) will slide across when it gets really hot in summer. High louvres draw hot air up and out in summer, and louvre windows on the eastern side promote cross ventilation. 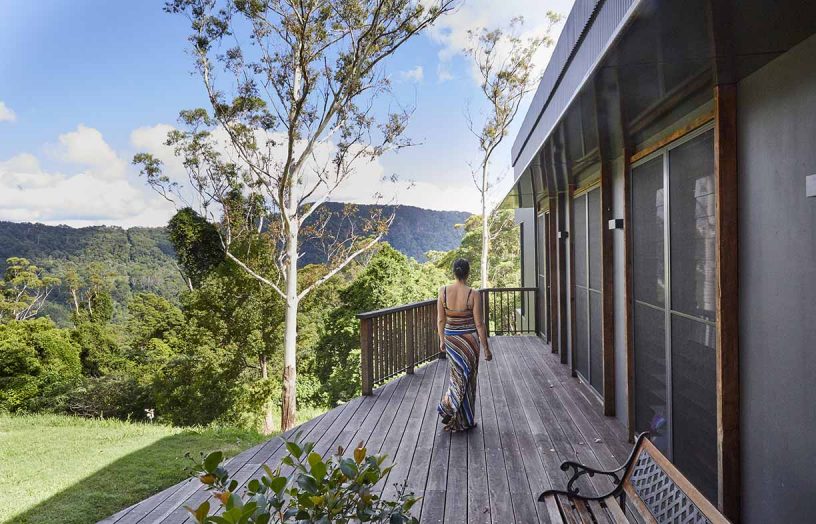 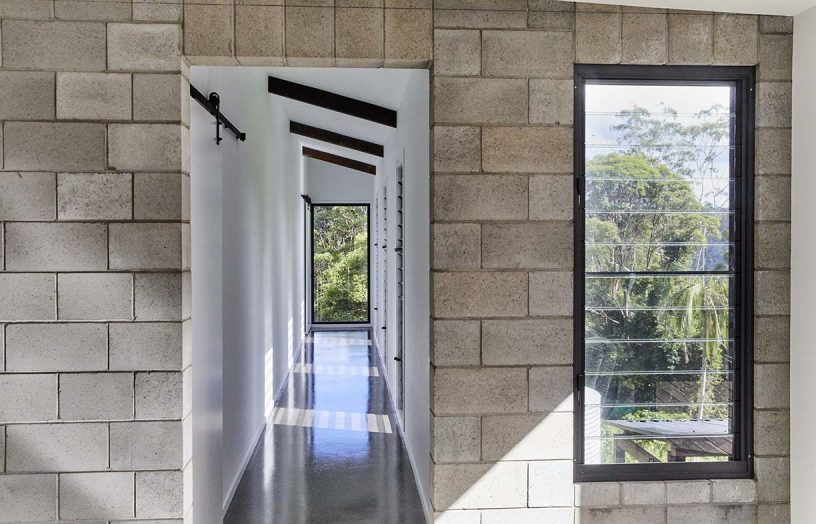 (Right) From the central living space, a light-filled gallery leads to the main bedroom suspended above the slope.

The family moved into their completed house at the end of 2019. Their second daughter was born six months later, and they are all appreciating the comfort and amenity of their expanded home. Jac and Chris may do a third stage in the future to add another bedroom, continuing to adapt their house for the changing needs and lifestyle of their family. 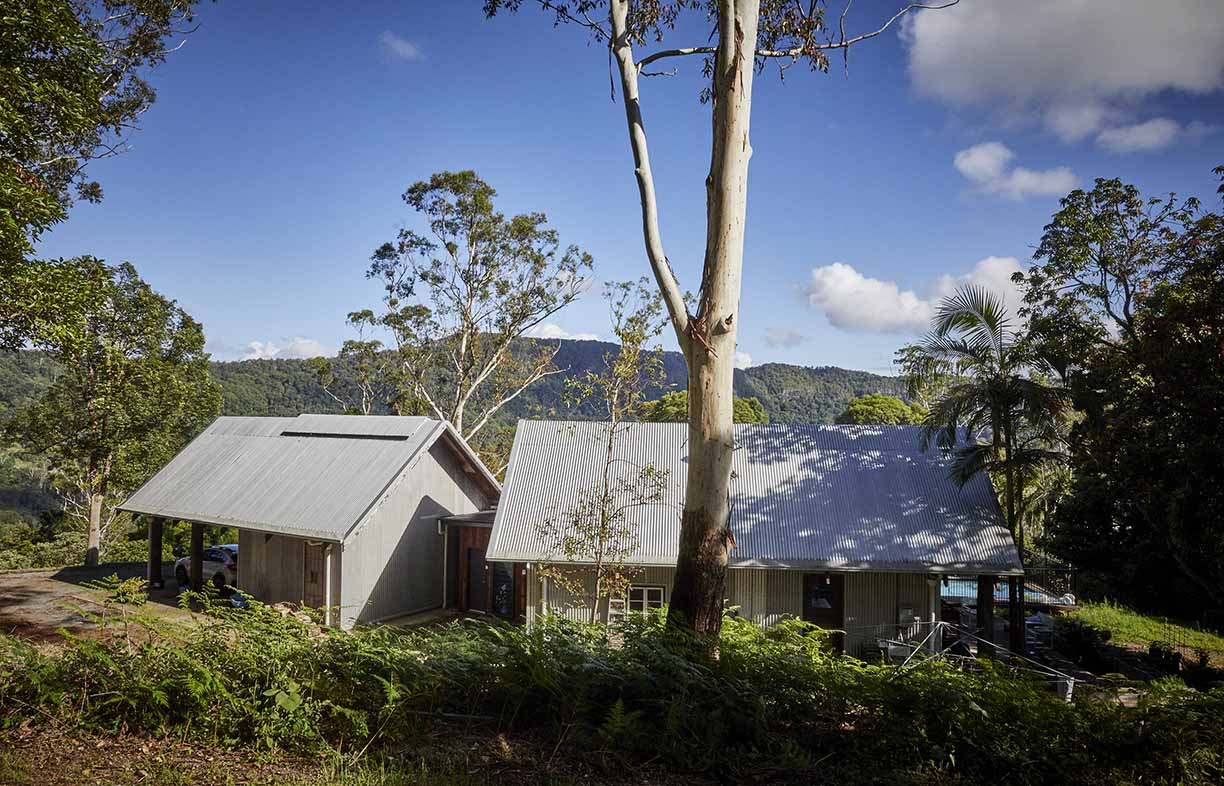