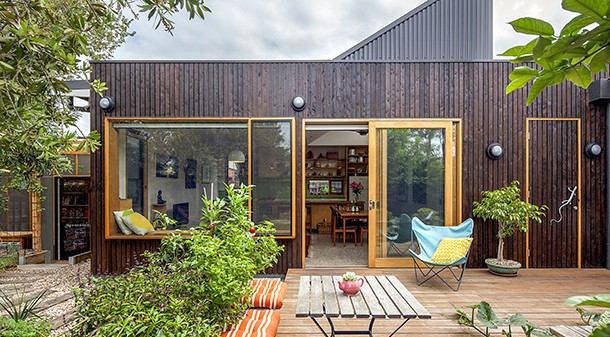 Amanda and Michael’s extension is clad in sustainably sourced white cypress shiplap board. Since this photo was taken, the east windows and glazed doors have been fitted with external awnings for shade and a pergola has been added over the deck. 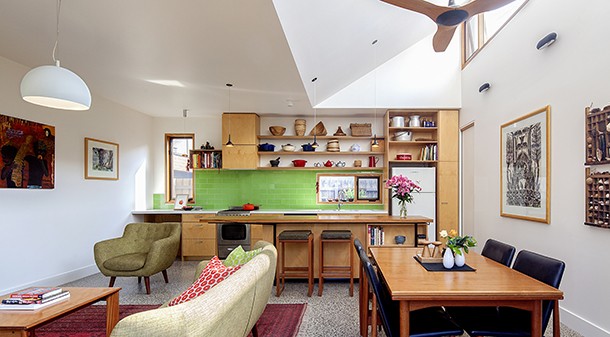 “We were originally planning reverse recycled-brick veneer for the southern wall for increased thermal mass, but in the end the budget didn’t allow it,” says Michael of the new living space. “As it turns out, because the room is really well sealed and insulated it performs really well.” 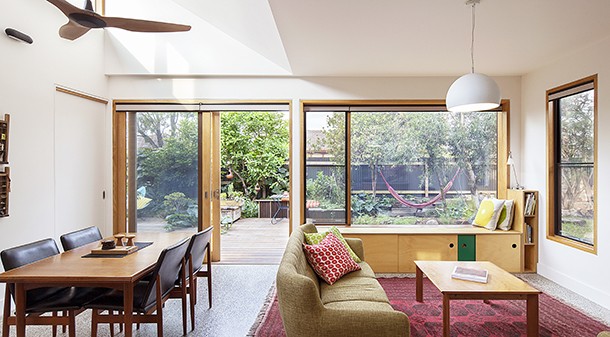 The cement-free E-Crete concrete slab is one of the experimental products Amanda and Michael were keen to try. Softer than traditional concrete, it was given a gentle polish and sealed with a water-based finish, and so far is working well. 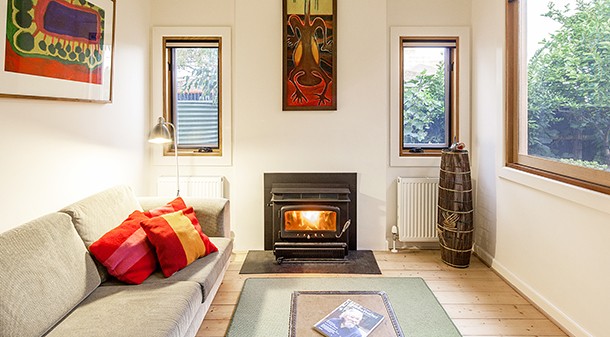 The home’s existing living room was rejuvenated with a new window onto the deck and garden and an efficient Nectre wood heater.
< 1 / 4 >

This modest extension showcases not only passive solar design but also well-researched eco-friendly materials, some of them still experimental.

When Amanda Martin and Michael Simon bought their inner-northern Melbourne home 13 years ago, it was with a low-impact lifestyle in mind: “It was a real compromise,” says Amanda. “The blocks and houses around here are quite small, but we really wanted to live somewhere where we could easily ride bikes to shops, schools and parks.” She describes the original 1929 house as a “depression Californian bungalow – smaller than usual and with no ornate plasterwork.” Despite its cramped rooms and typical maze of services – kitchen, laundry, bathroom – tacked on at the back, the couple and their young daughter Georgie lived happily in the house for a decade before deciding to take on the renovation they had always planned.

Their brief to Sarah and Paul of Baker Drofenik Architects was to provide a light-filled new living space that would be comfortable with minimal active heating and cooling, to improve the connection with the family’s beloved garden, and to create a breakaway space for their growing daughter. “It’s a small site, and Amanda and Michael also wanted to fit a garage in, so there were space constraints,” explains Sarah. “But the great thing about the block is that it’s a ‘peninsula’: it’s got streets on three sides, so it feels surrounded by trees and sky, not buildings.”

Their design involved removing the small back rooms and building a new kitchen/dining/living room to the south, close to the western boundary to maximise back garden space. Clerestory windows to the north have eaves designed to block summer sun but admit winter sun deep into the room, where a concrete slab floor acts as thermal mass to help regulate the internal temperature. The windows are all double-glazed, and the large eastern windows are fitted with both external awnings to keep out morning sun in summer and thermally efficient internal honeycomb blinds for heat retention in winter. Although sliding glazed doors provide access to the deck and garden, the homeowners and their designers had the foresight to include a standard entry door off the deck too. “It’s to avoid having to raise or duck under the awning on the glass door to get in and out,” explains Michael. “And it’s sheltered from the north wind.”

Behind the extension is a small garage accessed from the street behind the property. In the retained part of the house, new timber double-glazed windows and heat pump powered hydronic heating panels were installed. An efficient wood heater in the tiny original lounge makes it a cosy second living room. Overhead, a large existing attic storage space has become a bedroom and getaway for Georgie. It was renovated and insulated and the fold-down access ladder was replaced with permanent stairs.

As self-described early adopters of sustainable technologies, Michael and Amanda already had water tanks connected to their toilet and washing machine, and a solar PV system oriented to the north, facing the street (for which they had to fight, as the house is covered by a council heritage overlay). They continued this philosophy with the renovation, taking on much of the materials research themselves. After detailed investigation, they settled on white cypress timber cladding as the most sustainable option for the extension. “It’s a species that doesn’t form nesting hollows,” says Michael. “Our timber came from New South Wales and Queensland, from areas that had been heavily cleared and regrown, and are now being selectively cleared to bring the forest back to a better state. It’s a by-product of active management of the forest.”

“Many of the products we chose are just emerging – we wanted to try them so we could talk about them, promote and encourage their use,” says Amanda. For the concrete slab they opted for E-Crete, a geopolymer concrete in which the cement component is replaced entirely with fly ash, a waste product of coal burning or steel production. This reduces the embodied energy of the concrete. “This product is still seen as experimental,” says Sarah, noting that Michael and Amanda’s project was one of the first to use E-Crete for a polished slab. “But once industry catches up to the science, it will see a real reduction in greenhouse gas emissions.”

The E-Crete slab took longer to dry than standard concrete, and is a bit softer, meaning a super-polished Hiperfloor finish wasn’t an option. That didn’t worry Amanda and Michael, who prefer the matte effect of the light polish and water-based seal that the builder and floor polisher recommended. “We were warned about possible cracking with this material,” says Michael, “but it’s held up really well, even with the hydronic in-slab heating.”
The couple’s preference for natural finishes is evident throughout their home, with soft colours, matte textures and plywood cabinetry (sustainably sourced Australian hoop pine ply, of course). The new living area is a lovely space to be in. “It’s particularly fantastic in winter, because you can sit at the south end and get a nice chunk of sun.”