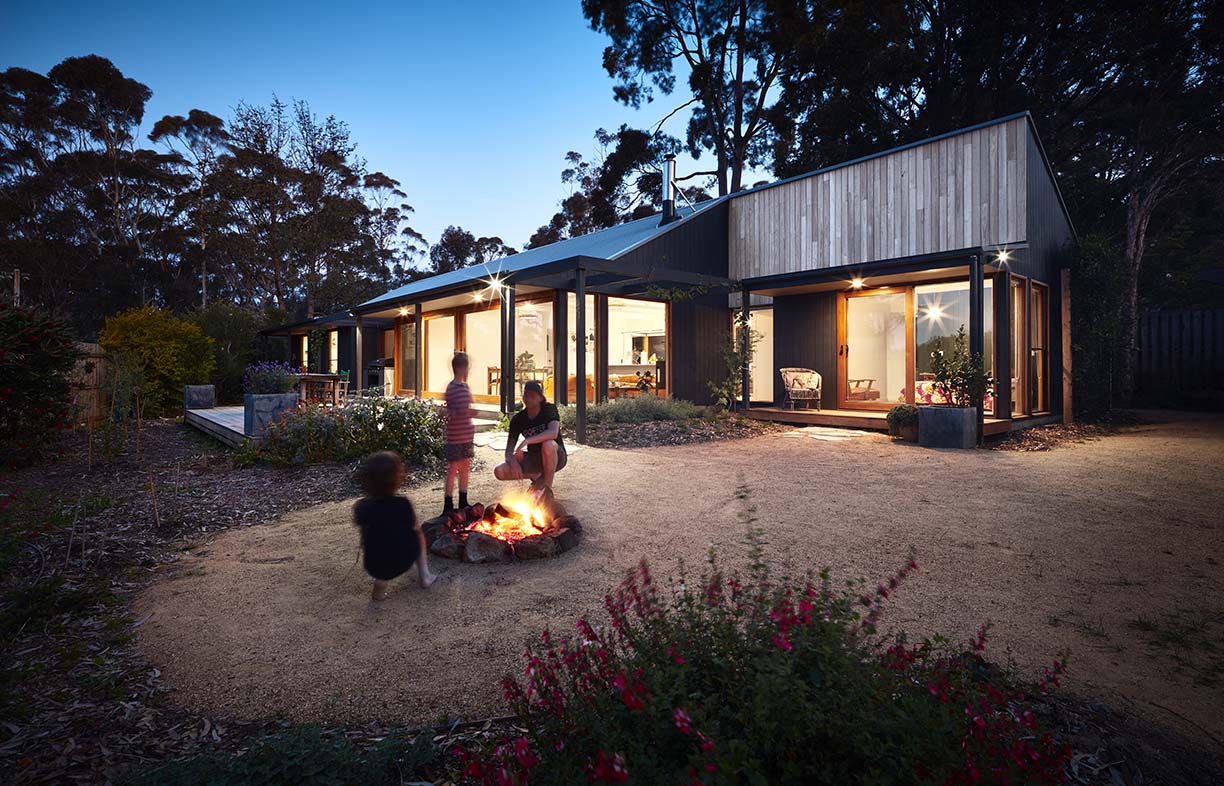 A young family opted for a prefabricated construction approach to create a lovely, affordable custom-designed house on the Victorian coast.

In 2011, Dean Atkins, Zoe Proctor and their children moved onto a beautiful block in the tiny seaside community of Somers on Victoria’s Mornington Peninsula. Though the block had great potential, the house they were living in didn’t: it was a tiny fibro shack with no insulation.

The family dreamed of building a sustainable, affordable and compact home on the land. After one attempt at a design that ended up being too expensive for them to build, the family found Fairweather Homes, a small Melbourne architecture practice that specialises in prefabricated green homes.

Fairweather was founded 35 years ago on the then-revolutionary premise that high quality, sustainable homes could be built with a prefabricated and modular approach. Under director Paul Adams, the practice developed a system that, while requiring homes to align with certain design rules for standardisation, still allows custom architectural design to accommodate individual client needs.

“The floor plan and layout is as flexible as you can dream of,” Paul says. “We are able to design anything from a compact single room to a sprawling building.” Of the manufacturing system, he explains: “It’s a hybrid approach. We’re not prefabricating a pod or box; we are prefabricating the components which then get assembled rapidly on site to get to the lock up stage quickly.” 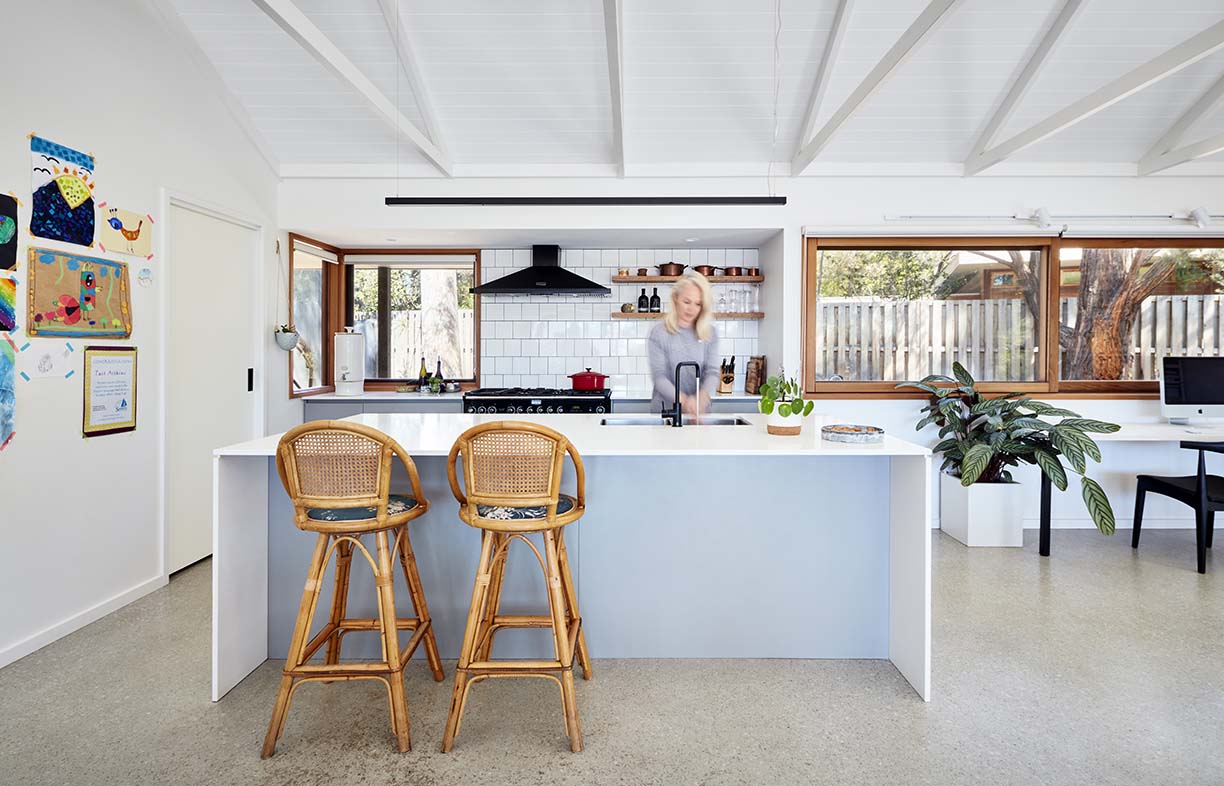 Fairweather uses timber as the main building material, with a focus on sourcing the wood sustainably. Paul points to Donvale eco-village Mullum Creek’s resources as his guide for best practices with sustainable timber (see ‘A knotty issue: Responsibly sourced timber’ in Sanctuary 52 for more on this).

Until recently, Fairweather used a ‘kit of parts’ approach, in which components were made in the factory and assembled into panels on site. Now they’ve begun transitioning to prefabricating full panels and wall systems and transporting them to site. “The core of our approach is still architect-driven, wood-based construction, flexible design and cost control,” Paul says. “That checklist is what these clients were interested in.”

Zoe and Dean wanted a modest- sized house that could provide separate spaces for parents and children and take advantage of the outdoors to increase liveable space. Passive solar design was important to them so they oriented the house to the north, at an angle on the block, rather than towards the street which runs along the south-east boundary. Additional windows (with shading) were added on the west side of the house to increase the connection to the back garden. 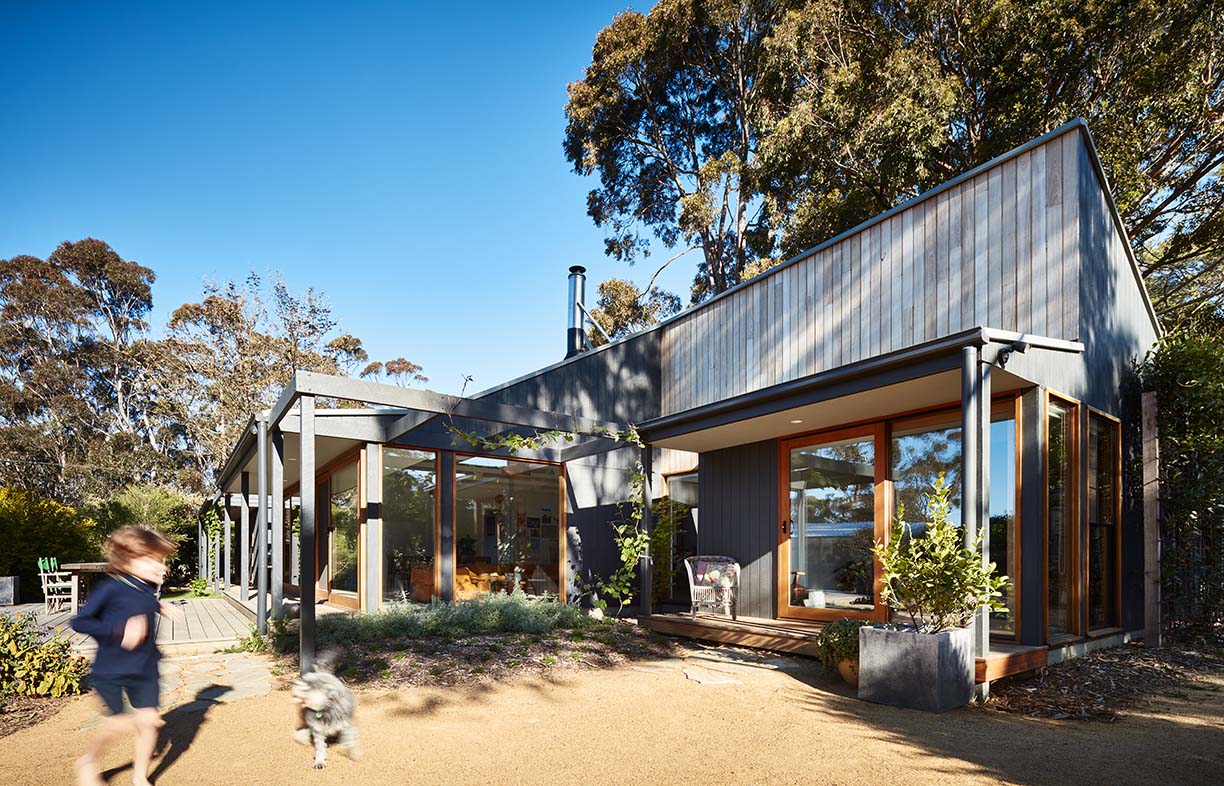 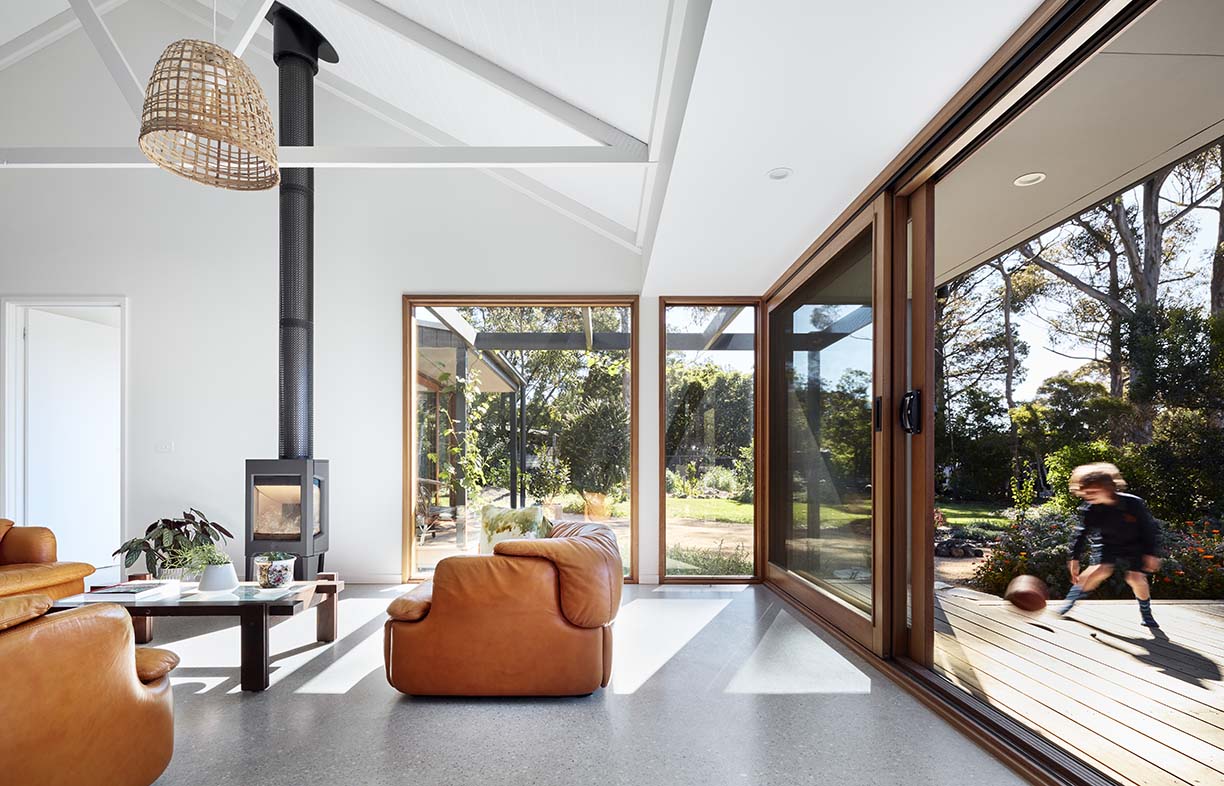 "The light and the cross breezes are amazing," says homeowner Dean. "The proportions are great and room sizes are perfect. We love the window placements and connections to the outdoors."

“I found Fairweather’s standard dimensions easy to work with,” Dean says. The careful design process resulted in a 185-square-metre home with an open plan kitchen and living area flanked by bedrooms on either side. The couple decided to build only two bedrooms for their three children, to keep the footprint compact. “I grew up with four brothers and we always shared bedrooms,” Dean explains.

Generous decks and verandahs connect the home with the outdoors and provide additional space for the children to play and adults to relax. Pergolas on the home’s east and west sides protect windows from hot morning and afternoon sun in summer. Those same windows slide open to provide cross ventilation.

Dean and Zoe say the home is “awesome” to live in and comfortable all year round with little heating and no cooling. For cost reasons they decided to connect the home to gas, which powers their hot water and in-slab hydronic heating system, but are planning to invest in solar in the future and designed their roof to be solar panel ready. Paul mentions that the conventional wisdom around all-electric homes was not as established when this home was first designed in 2016, and emphasises that regardless, “our advice is always to design a building that requires as little active heating and cooling as possible to start with so whatever fuel you use, consumption will be minimal.” 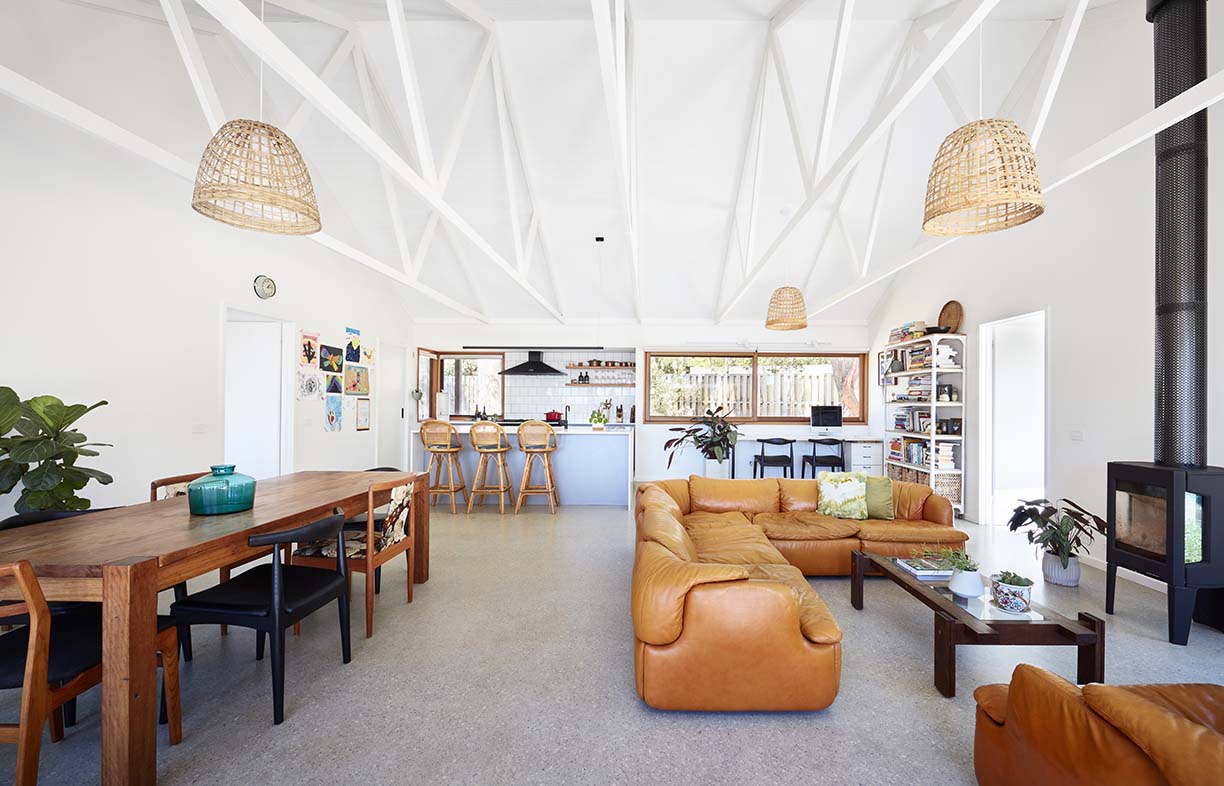 A spacious living area and kitchen is in the centre of the house, with bedrooms on each side.

One of the greatest benefits of taking the prefab route is a quick construction time, and the build largely delivered on this promise. Built using Fairweather’s ‘kit of parts’ system, the house took about two months from the pouring of the slab to lock up. Despite the builder falling ill during the construction process and the interruption of the Christmas holidays, the house was completed in seven months altogether. These days, Fairweather builds homes even faster. Paul says that with their new panelised approach, a home can be fully ‘weatherised’ in as little as two days. A builder then completes the customised internal fitout, the lengthier and more expensive part of the process.

Fairweather doesn’t guarantee low prices on its homes – Paul says their homes average between $2,000 and $2,500 per square metre – but what they do provide is security that large parts of a project are cost controlled.

Paul wants his practice to communicate the message that not all prefab homes are created equal. “Just because it’s prefab doesn’t mean it’s sustainable,” he says. “We need to get deeper into the approaches and materials used by the businesses in the prefab world and how to choose among them.” 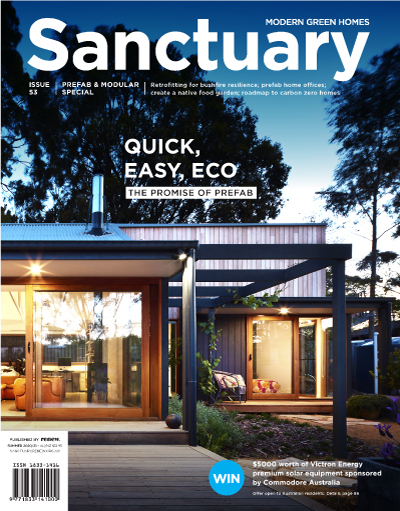