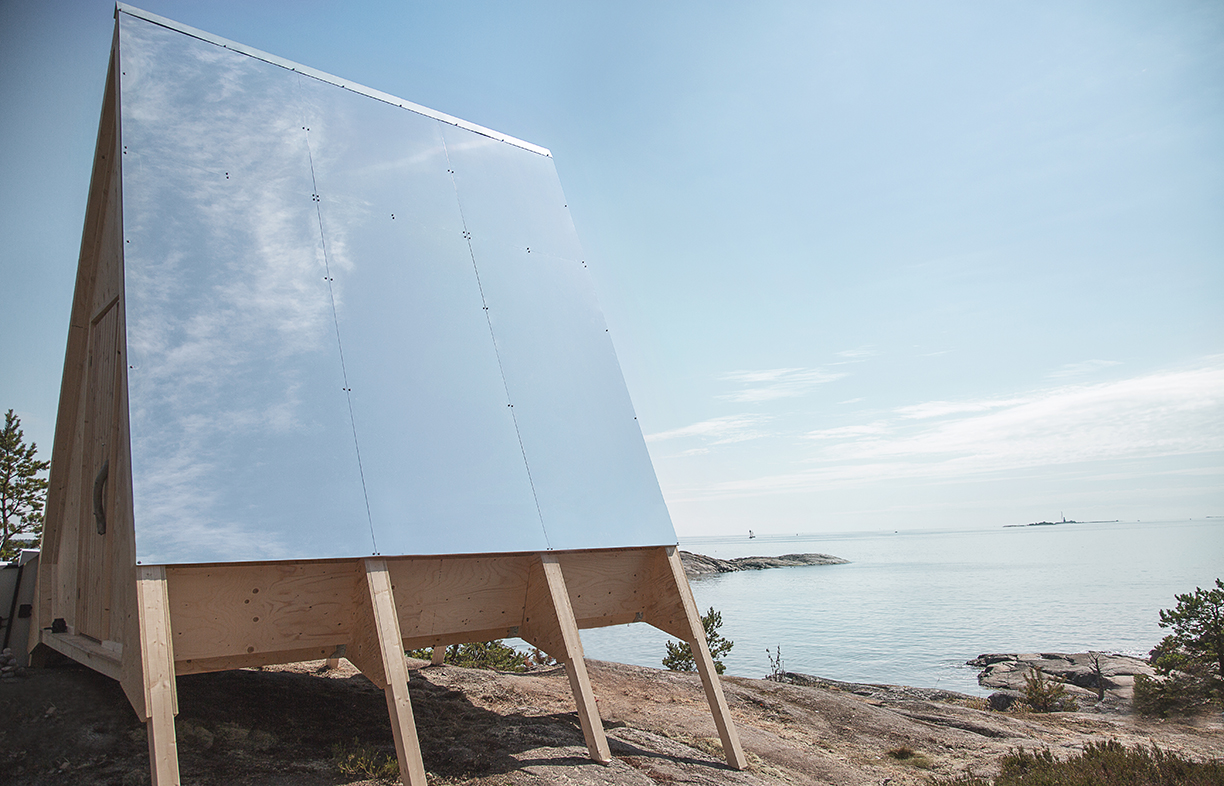 We’ve all heard the gripe that Australian houses perform no better than glorified tents, but architects are taking inspiration from these age-old forms. The houses showcased here demonstrate how long-held understandings about shelter have a role to play in climate-responsive design.

Beyond national parks, director Cary Duffield sees hard tents filling a gap in the market. “Planning rules across many of Australia’s states and territories continue to adapt (and so should they) to meet the growing need for additional accommodation and dwindling housing ownership opportunities,” says Cary.

“This opens the market for both young and older people who can’t afford a standalone property, including those at risk or in need of family support. In so doing, relieving building pressue on our health and care sectors by providing alternatives.”

Cary acknowledges that “as affordable as we’d like to make them” the Hard Tent is, like tiny houses, a higher end product.

But with the ability to customise materials and insulation levels, even to install glass windows and air conditioning, the Hard Tent is a base product that can morph into a more enduring shelter. 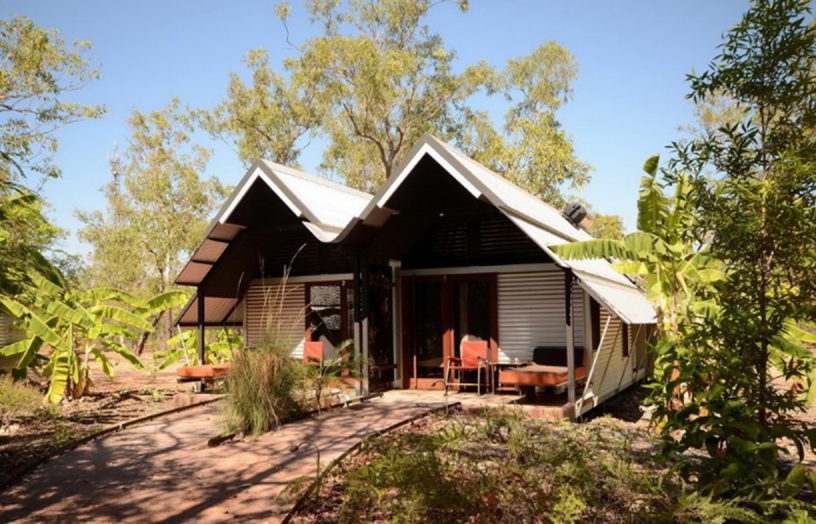 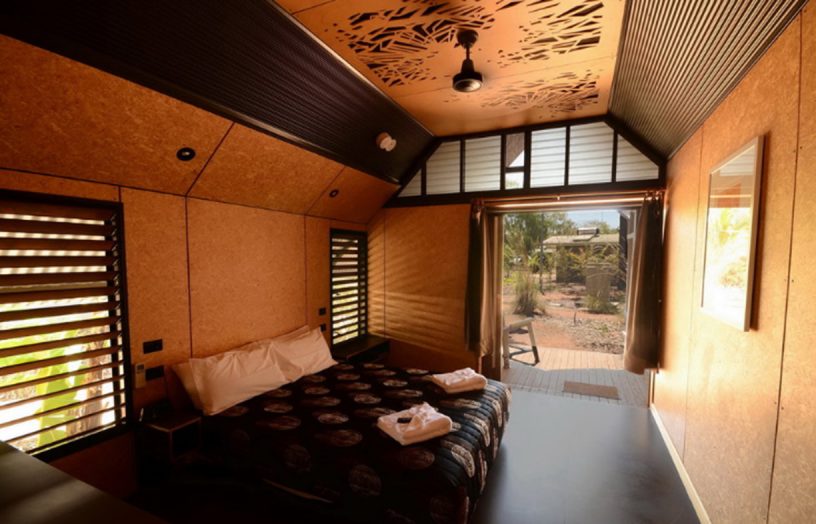 Architect Adrian Bonomi was commissioned to build a low-impact house on Victoria’s Mornington Peninsula and the finished design, with its triangular profile and ridged roofline that actually touches the ground, is decidedly tent-like.

Materials were selected for longevity and, says Adrian, “to keep the building efficient and to only use materials that can be recycled or reused.” The house is designed on passive solar principles, runs on solar PV and manages its wastewater on-site (just like bush camping).

Living here means compromising on some comforts, but then, “that’s camping!” laughs Adrian. “You have to live with the fact that sometimes you have to light a fire, and other days will be uncomfortable because there’s no air conditioning. You need to be … sheltered, but can’t have every creature comfort.” 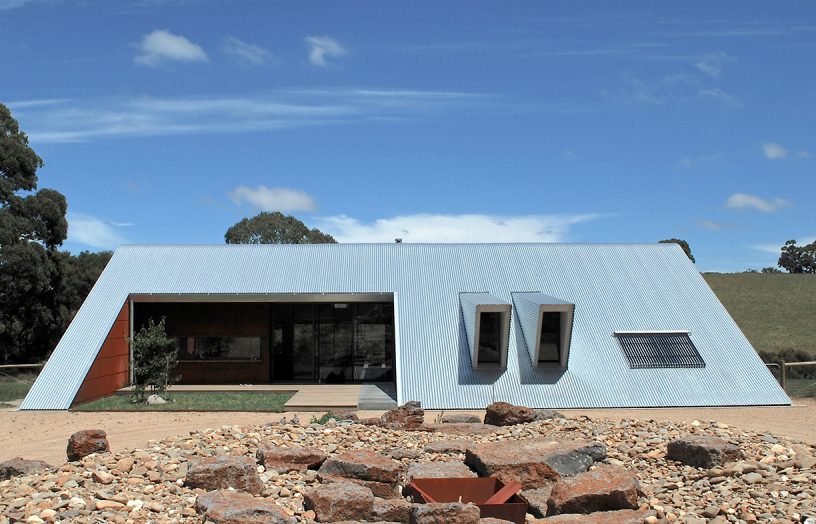 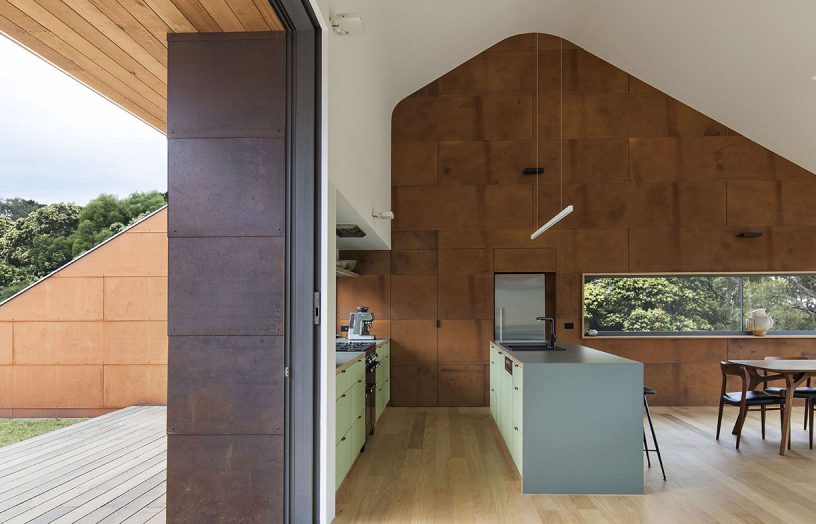 Across the pond in New Zealand’s Waiheke Island, architect Chris Tate reacted against the trend for large holiday homes by trying to replicate “the back-to-basics simplicity of a camping holiday” for his 70m2 weekender. Its sharply raked ridgeline evokes a collapsed tent and its bush location is prime camping terrain.

While it has succeeded in meeting Chris’ modest requirement to be “primarily a shelter”, it also meets NZ building energy efficiency standards thanks to floor and wall insulation, and a double-glazed, full-height window on the north face that catches the winter sun.

Austin Maynard’s cylindrical beach house at St Andrews Beach, Victoria, set out to achieve the pared-back simplicity of a hard tent. But, says director Mark Austin, there were tent attributes they wanted to avoid, like “the running cost of heating and cooling a building fabric with no insulated quality; also, the idea that at some point without maintenance the thing will fall apart and the embodied energy of getting rid of and replacing it.” 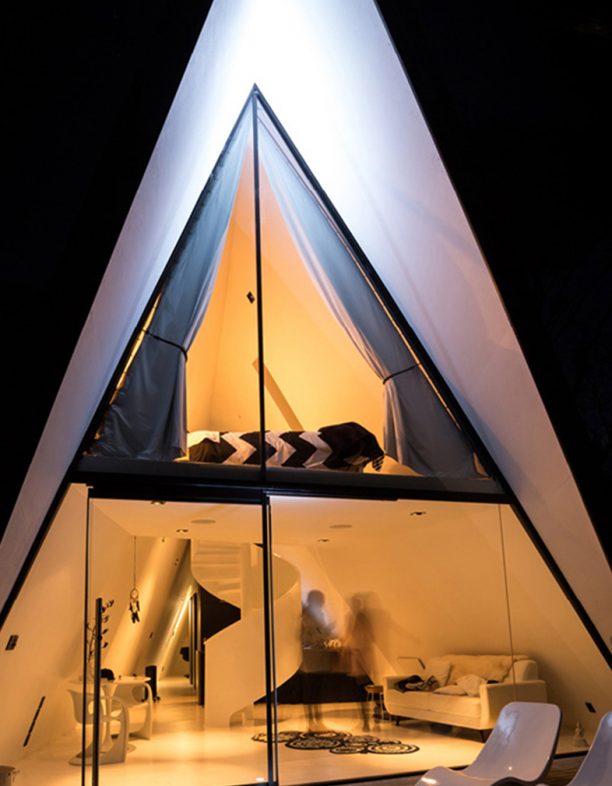 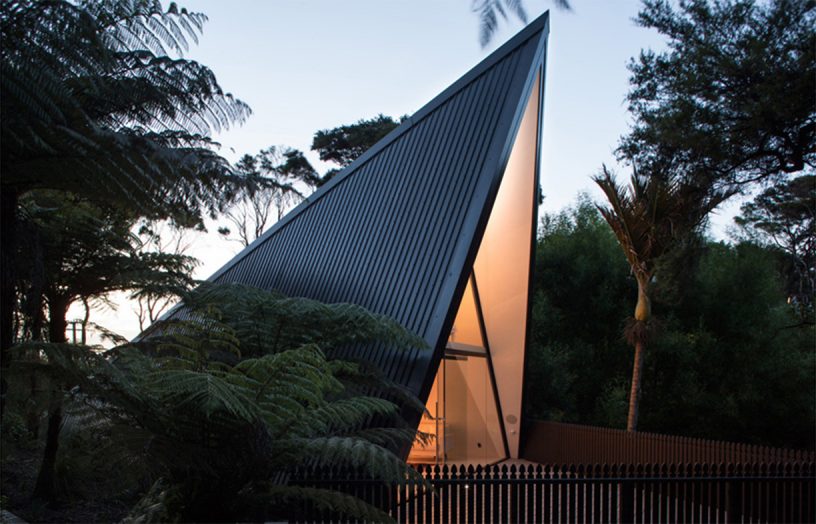 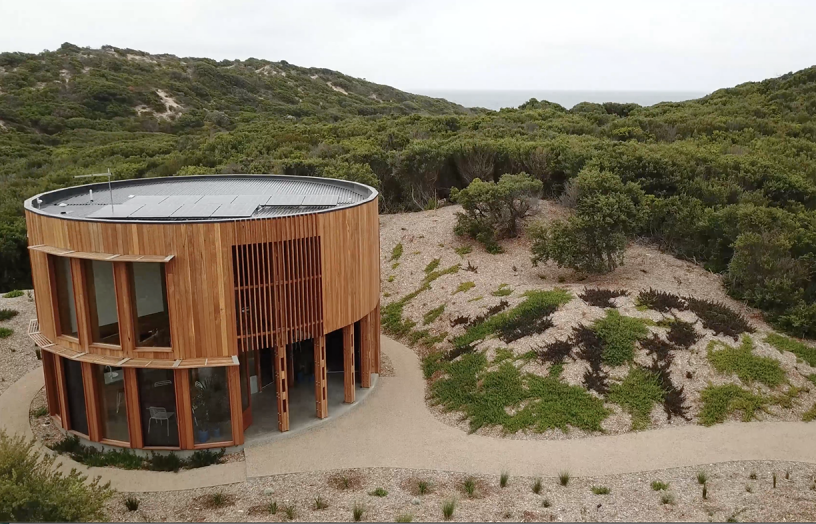 An icy archipelago off Helsinki is where Finnish designer Robin Falck’s Nolla cabin is a contender for Architecture Daily’s 2019 Building of the Year Award. The 10m2 A-frame runs on solar and biodiesel for heating and cooking, is made from locally sourced wood and can be taken apart, moved and rebuilt without any heavy machinery.

In designing it, Robin says he “did think of it like a tent, a very fancy tent.” He believes a ‘minimal mindset’ and ‘chance to unplug’ are intrinsic to the camping experience, and “this was something I wanted to bring as a concept to the Nolla cabin.” At a cost of US$25,000 to design and build, the Nolla is available for short-stay rental – just be aware that, in true tent style, the bathroom is outside

Somewhere between a sleep-out and a cubby is where you will find Crump Architects’ Treehouse in Tasmania. Built for his two children as an escape, it has direct climbing access to the tree trunk through a back door and deck views to the city and across the Derwent River. “Originally I was considering just building a platform in the tree for a canvas bell tent to sit atop,” says Nathan Crump. “But when a project next door required a black Colorbond carport to be demolished, I began thinking about recycling the materials to make something more permanent.”

The large custom-made steel-framed northern glass facade incorporates a salvaged (from the tip shop) timber framed glass door. “The building internally is lined with whitewashed Baltic pine to reinforce the singular materiality of a tent-like structure,” he says. With a wood fire and enough space for a double bed, we wish Nathan’s children luck keeping the adults from invading their hideout! 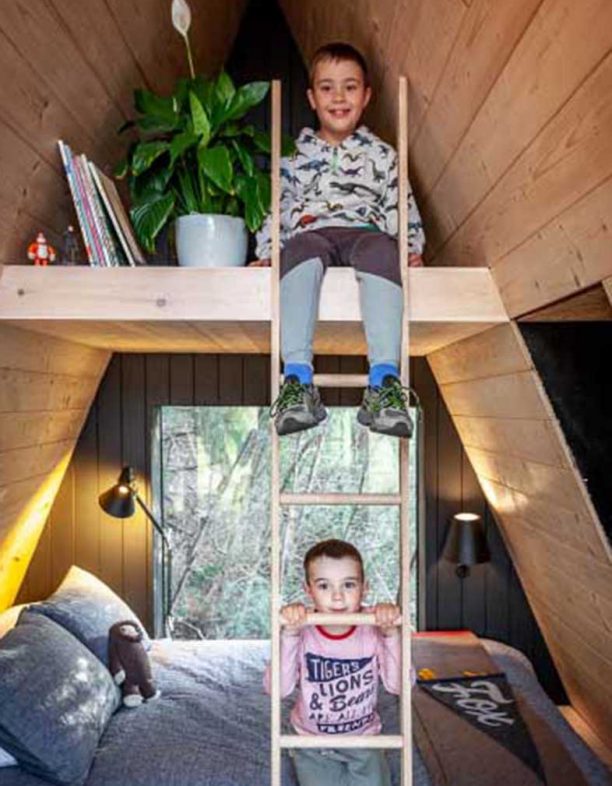 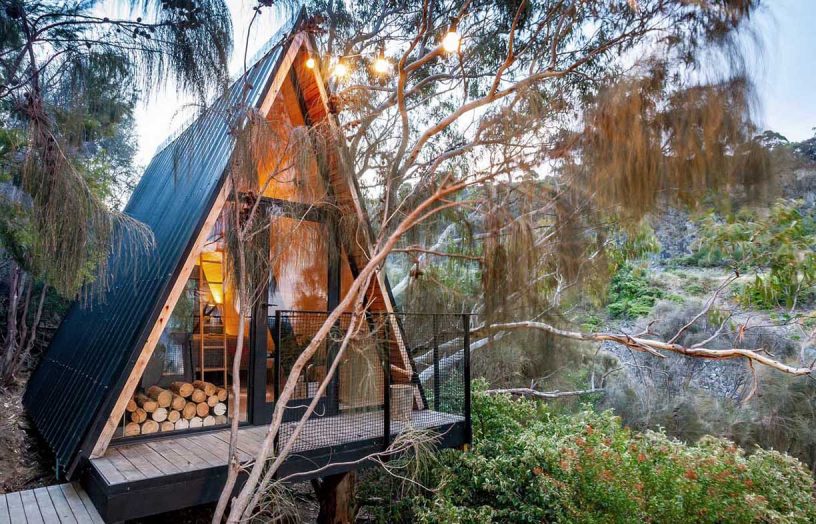 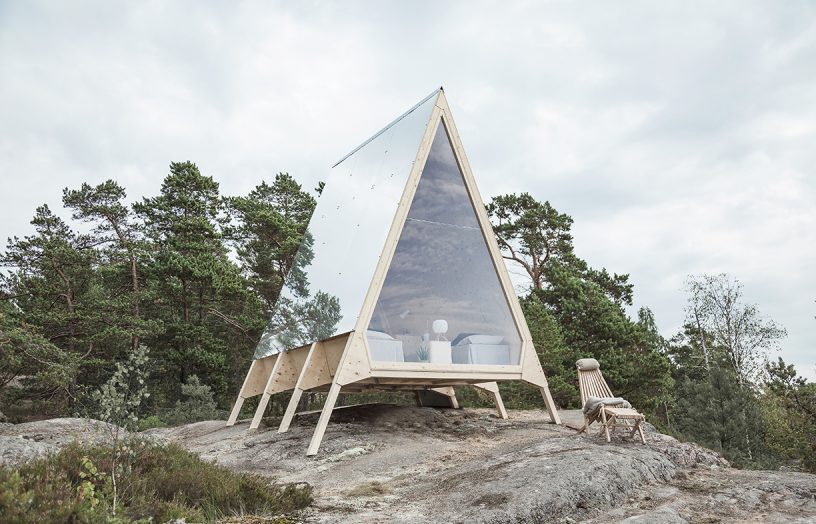 Summers in the Sunshine Coast hinterland are gentle enough to spend in a tent, but the cooler months need a more insulated shelter. Architect Dan Sparks plays both cards in his Noosa build that tethers a membrane roof above an insulated ‘real’ roof.

Dan describes the house “becoming a platform under a tent” when the insulated roof is retracted and the walls are slid away. Now the membrane works like a tent fly, taking the brunt of heat or rain while letting air circulate underneath.

But when the insulated roof, walls and doors are slid into place, the house reverts to a closed envelope. Because of this, Dan says the house would have no problem meeting minimum building energy efficiency standards. Whether it would suit a harsher climate is, perhaps, another question.

Tent-inspired sustainable homes, with their elemental forms and absence of creature comforts, aren’t for everyone. At the same time, building energy efficiency standards don’t express all the desires, requirements or sustainability principles that people hope for in their homes. Cary Duffield of Troppo describes this as a ‘green line’: it’s hard to always be on the right side of it.

Some fundamental principles of tents have endured for good reason, particularly the imperative to pare back to the essentials. As Robin Falck puts it, “limiting space is a great way of forcing people to really think about what they bring with them.” This threshold will be different for everybody. Happily, building standards and tent design don’t have to be mutually opposing, as the innovative examples in this story illustrate.