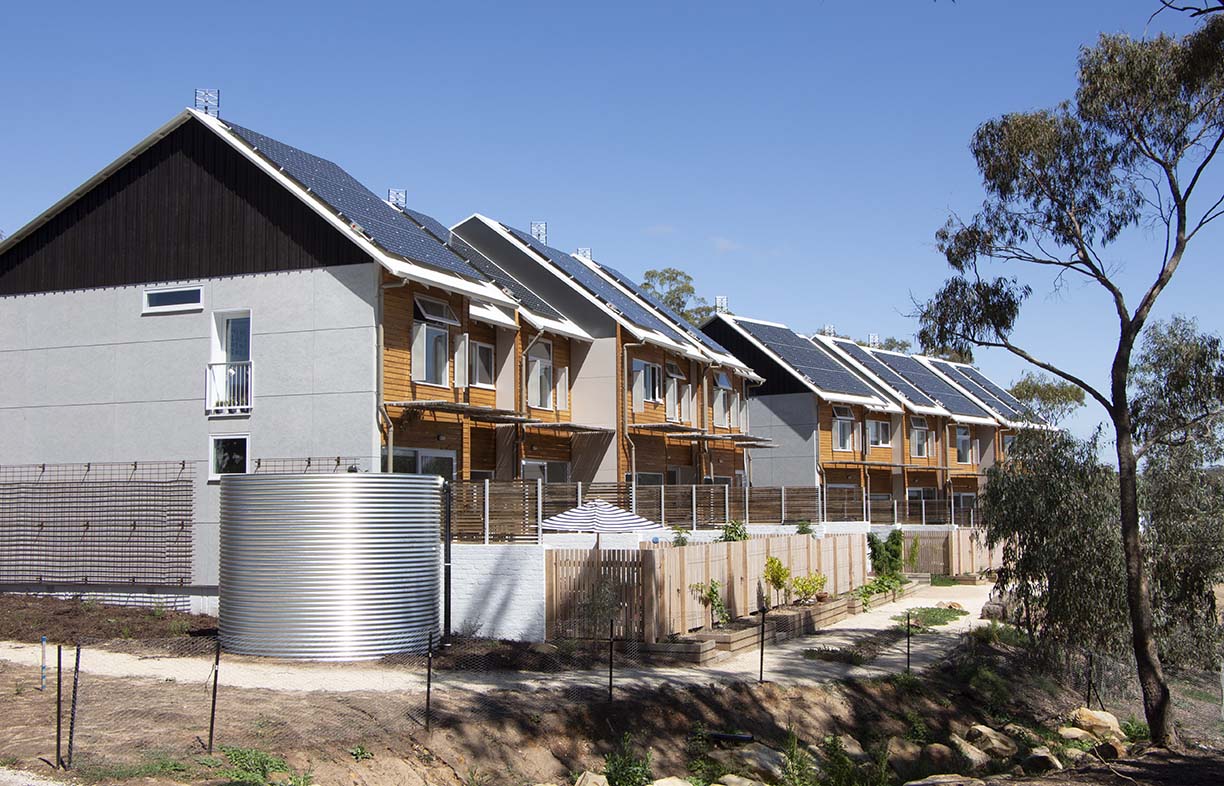 Deb's house is one of seven plus a community house built as part of Stage 1 of The Paddock ecovillage. Downstairs, the community house features a meeting room with kitchenette, and a shared laundry that also houses a comprehensive recycling setup for everything from cardboard to used pens and batteries. Upstairs, three bedrooms and a small kitchen/dining room are available for use by residents’ guests or for short term rentals to bring the Owners’ Corporation some income.

When Deb Shand downsized to her comfortable new eco home in central Victoria, she got a ready-made sustainability-minded community too.

In a peaceful bushland setting less than two kilometres from the centre of Castlemaine in central Victoria, a housing development with a difference (or rather, several differences) is taking shape. Named The Paddock, it’s an ecovillage with a strong focus on connection to nature, low-impact living and fostering a sense of community. And the first residents have now moved in.

The project is the brainchild of local environmentalists Heather and Neil Barrett, who have owned the land for nearly 40 years, and Geoff Crosby, a Castlemaine-based architect with long experience in sustainable design and liveable communities. Heather explains that the 1.4-hectare block, which had been a horse paddock, is ideally located for a more sustainable lifestyle: “You can walk to town, to the station,” she says. “It’s a real asset for creating denser living than you often see around country towns.”

Stage 1, consisting of seven homes and a community house, is now complete. There will be 19 more homes plus shared food gardens, an orchard, small wetlands and a shared workshop when the project is finished in the next couple of years. 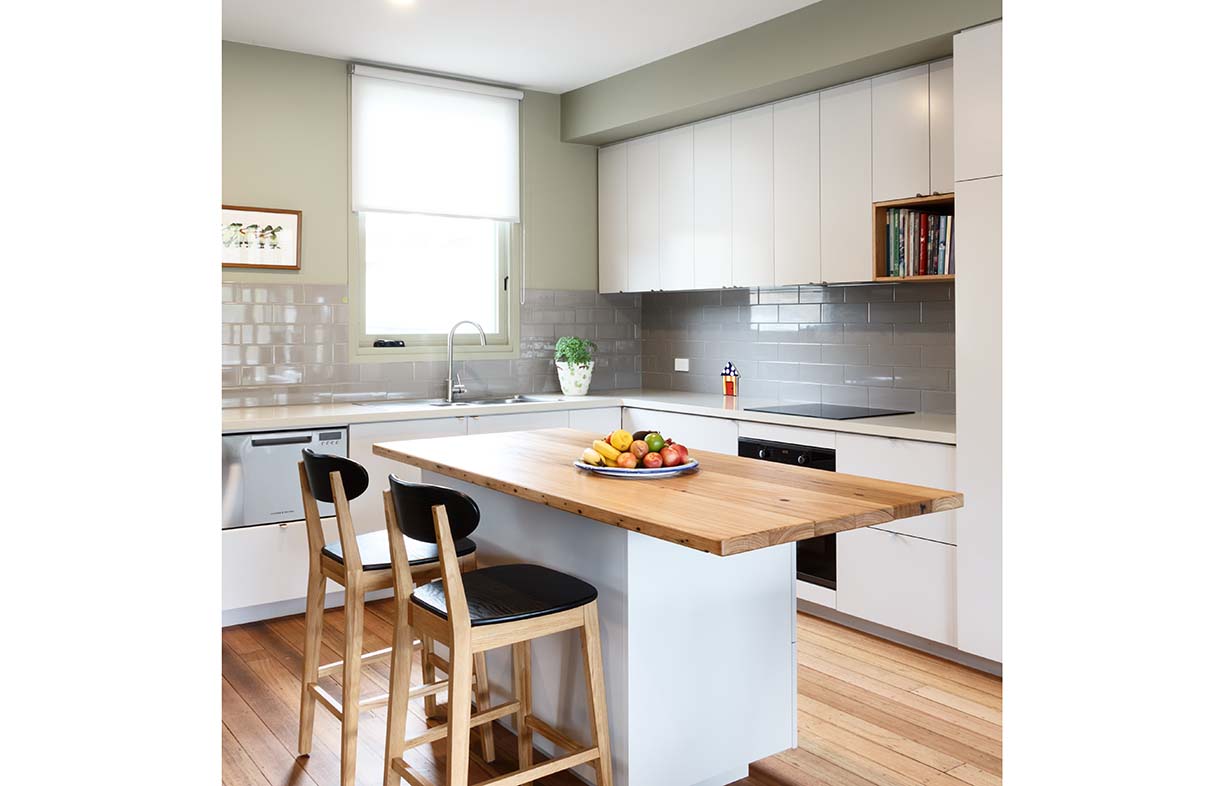 Materials were chosen to be as sustainable as possible, and efforts were made to source them locally too. Floors and the kitchen island benchtop are recycled hardwood. Right: 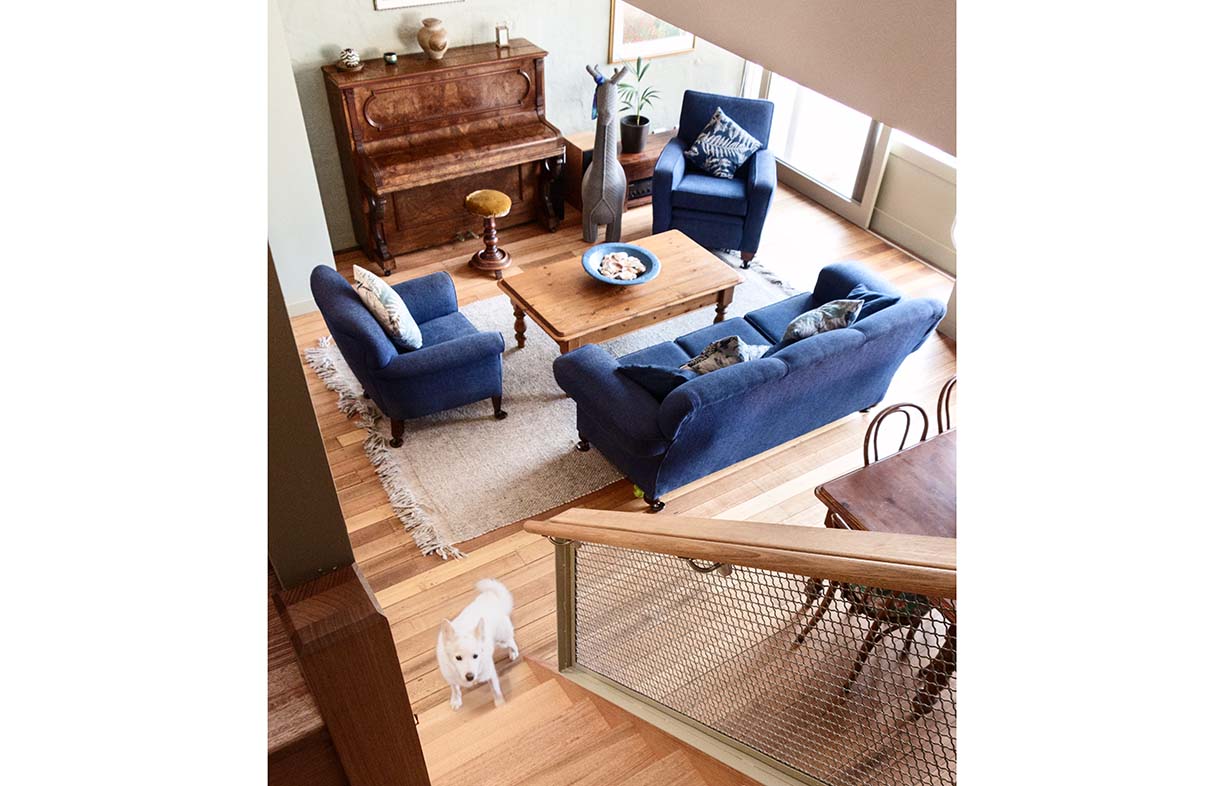 Deb Shand moved into her compact three-bedroom house in November last year. “I heard about The Paddock at the Sustainable Living Festival in Melbourne in 2018, just at the time I was starting to think about downsizing,” the mother of three adult children says. “The project fitted so well with my values: I wanted to live more simply, more sustainably and closer to nature. To be able to just buy into it was great.”

Like all the others, Deb’s house is two-storey and part of a small group of adjoining residences. Her front door opens to a light-filled combined kitchen, dining and living area with a serene study nook in the south-east corner; upstairs are three bedrooms and a generous bathroom. Her neighbours’ homes employ the same basic layout in two-, three- or four-bedroom versions, ranging in size from 84 to 120 square metres. Each dwelling has a sunny private courtyard on the northern side, and opens onto the substantial shared space in the middle of the gently sloping site where mature trees and two dams converted to wetlands will eventually be joined by terraced garden beds, fruit trees and native gardens.

Geoff has been involved in the project since 2008. “It had a long gestation,” he says. “Heather and Neil always planned some sort of development on the site, but their sustainability principles made it something of a crusade: how do we do development differently?”

He explains that the driving idea was to do good, not just less harm. “In particular, our aims were to support the local economy, to produce more energy than we use, to treat our own waste and to bring back nature.” To that end, the team decided to pursue as far as possible the requirements of the Living Building Challenge (LBC) for the project. The LBC is a comprehensive, holistic design standard consisting of seven ‘petals’, or performance areas: place, water, energy, health and happiness, materials, equity and beauty. It seeks to create healthy regenerative spaces that give more than they take out of the environment (see ‘Living Building Challenge: Enhancing the local environment’ in Renew 143 for more detail on how The Paddock tackled the LBC). 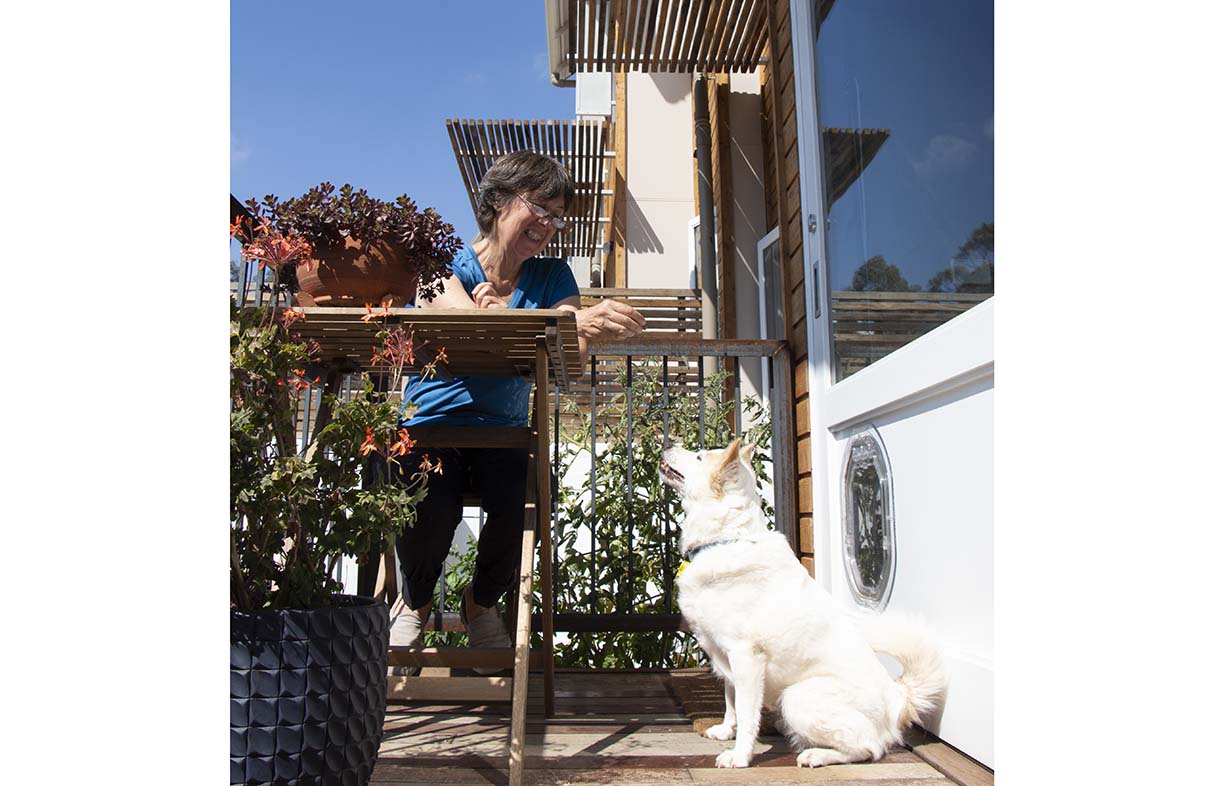 Deb's house has a private courtyard garden with a sunny north-facing deck. “Moving here was like moving into an instant community," she says, "which was important to me as I didn’t have friends or family in Castlemaine.”

“The LBC was a great checklist for helping us achieve what we already wanted to achieve,” says Geoff. He explains that the biggest challenge was the material selection: it was tough to balance the desire to source things as locally as possible with the requirements for sustainability and non-toxic ingredients, all with an eye on the budget. “Things have changed a little since we started, when we had to do all the research ourselves,” he notes. “There’s now an LBC certification scheme for materials, although not that many certified materials are available in Australia so it’s still complex and time-consuming.”

From a property ownership point of view, the development “isn’t doing anything groundbreaking,” says Neil, explaining that they made the decision to stick within the standard, well-understood mechanisms for developments. The homes are sold with freehold titles and a share in the communal spaces; it’s just that the balance between shared and private space is vastly different from most developments, with around two-thirds of the total land communally owned. Geoff says that despite this, the development achieves the same density – measured in number of bedrooms per hectare – as the central urban development in Castlemaine, which offers far less open space.

Another deliberate decision for the project was to restore habitat and increase the biodiversity of the site once building is done. This was driven by Dr Dominique Hes from Melbourne University. “A study was done before the design process started, to document the diversity of flora and fauna on the site and identify what was missing that should be here – snakes, frogs and so on,” says Geoff. “Landscape designer Matt Hamilton’s site plan balances food producing gardens with the natural ecology and natural water flow.” Further studies at completion and five years down the track are planned to ensure the biodiversity plan is meeting its goals. 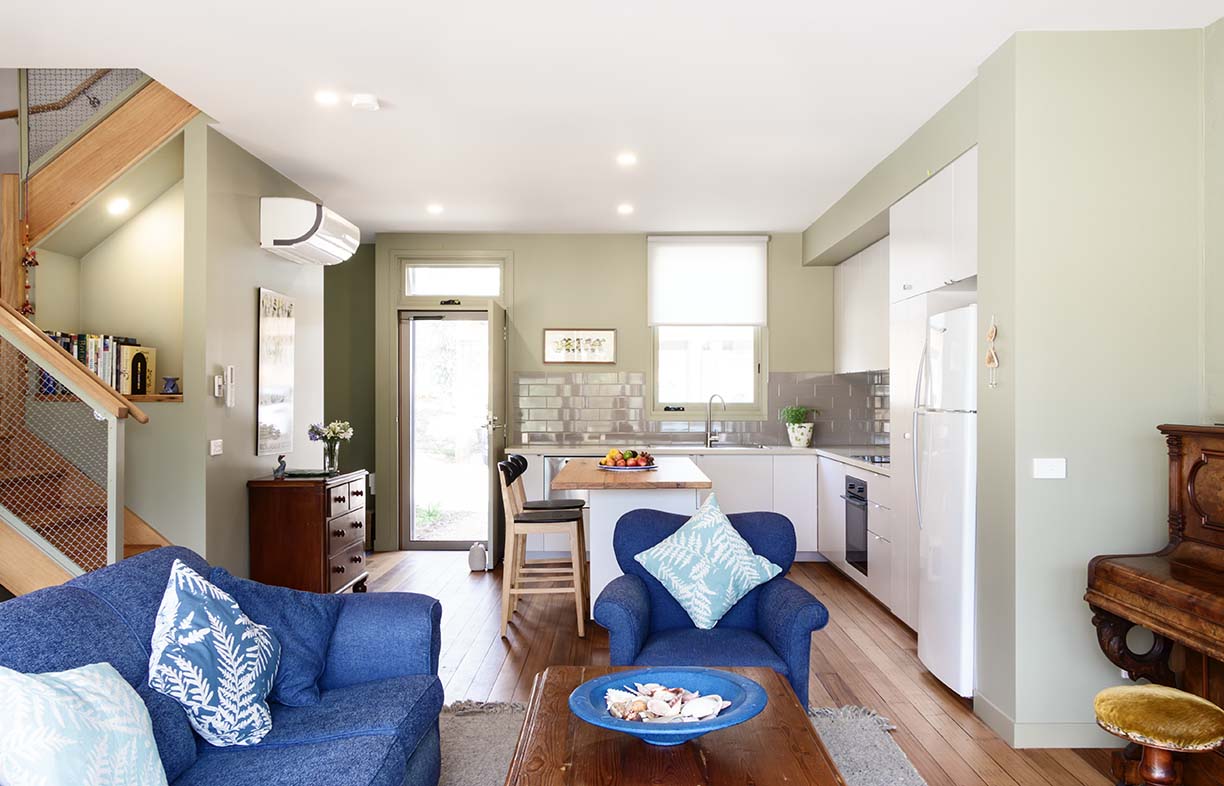 The house is designed for good cross ventilation and winter passive solar gain through northern double glazing that's shaded in summer, and rates 8.2 Stars for energy efficiency. Thermally, Deb reports that it performs very well with minimal need to use the reverse-cycle air conditioning.

As for the community aspect, Neil and Heather’s approach was to build housing that was as sustainable as possible, with the idea that the creation of community would follow. Geoff says that has already been happening organically during the design process, with a few future residents getting on board early, participating in workshops and getting to know each other.

Deb came in later in the process, but agrees: “With this design, we’ll get a community of like-minded people who are interested in sustainable living. It’s already going well, and it’s interesting to see the different skills people are bringing. For example, my next-door neighbour has extensive knowledge of native plants and is working with Matt to ensure we are part of a wildlife corridor.”

Neil says that getting The Paddock this far has been a lot more work than he and Heather had imagined. “But it’s hugely satisfying for us to see the way it’s working out so well for the people living here. There’s already the sense of a small community.”