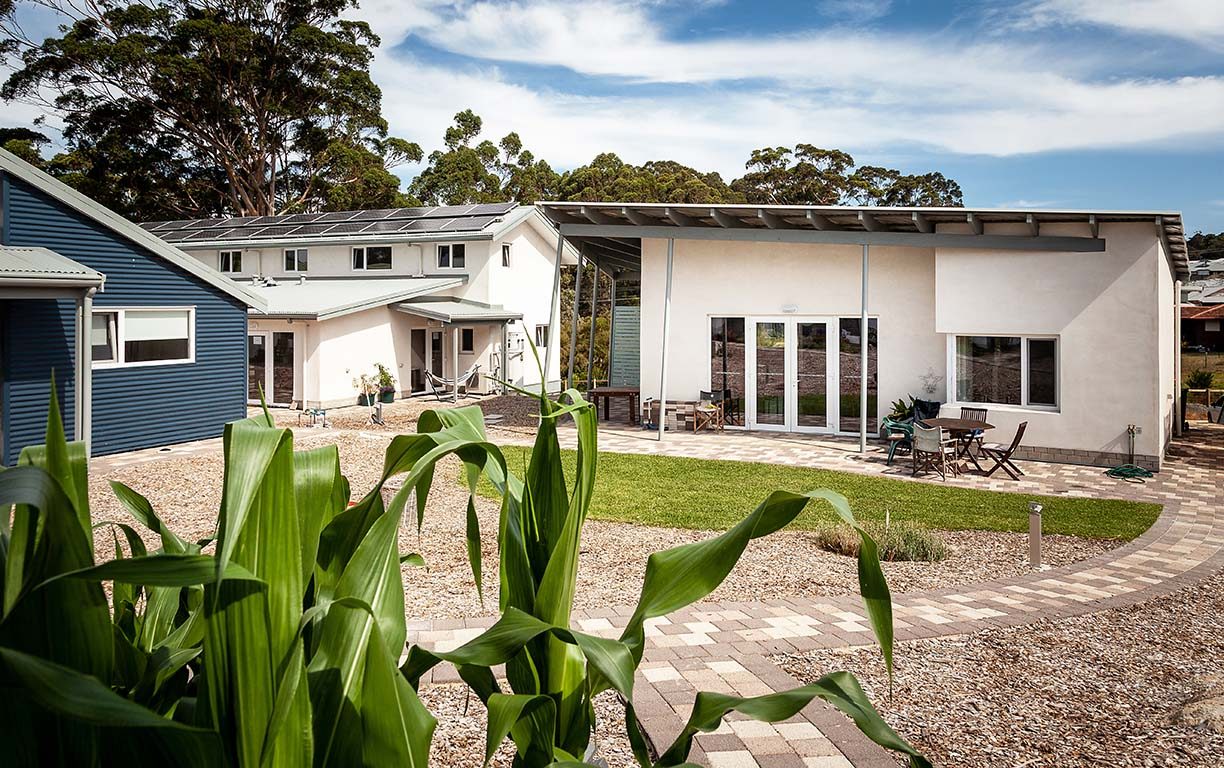 All the dwellings and the community house (right) open onto shared space and gardens at the heart of the development. The 168 panels that make up the communal 49kW solar PV system are distributed across all the north-facing roofs.

This new co-housing development boasts twelve high-performance hempcrete homes, all over 8.5 Stars, and a host of shared facilities – all without breaking the bank.

When Jess Prince and her partner Dave first became involved with a co-housing project in Denmark, in WA’s Great Southern region, their friends urged caution.

“It was a great leap of trust for us,” Jess says. “We were very drawn to the idea, although our friends told us that it was very unlikely that this type of development would actually get off the ground. As resident investors, we were basically shareholders contributing as much as we could to its eventual realisation.”

The project was spearheaded by Pam Rumble, a social worker and counsellor, and Paul Llewellyn, a former Greens MP. Jess and Dave joined not long after its inception, once the group had bought the land – a 6500 square metre site just 400 metres from the centre of town, with local schools and other amenities close by. 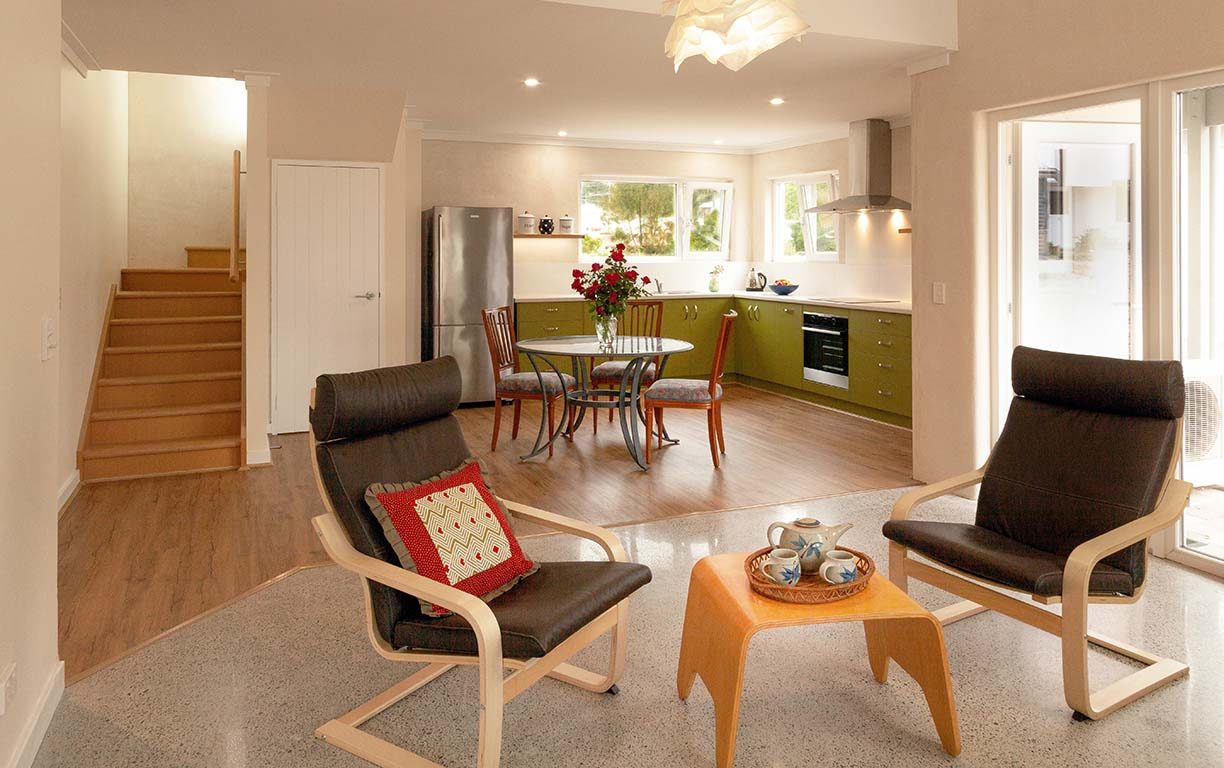 Thanks to Pam and Paul’s oversight and everyone’s dedication to driving this project forward, Jess and Dave proved their doubters wrong and were able to move into their new home in April this year, after Dave transferred his public service job to nearby Albany. Pam and Paul and the other co-housing partners – now neighbours – moved into their homes from September 2018, just after the project was completed.

It’s true that many co-housing developments turn out to be pie-in-the-sky dreams, and this one overcame many hurdles over its four-year development. Conceived and delivered by architect Tom Stevens of H+H Architects in Albany, the design is highly sustainable, and it’s one of the largest residential projects in the southern hemisphere constructed using the innovative material hempcrete for its walls.

With few local precedents for this kind of project, Tom looked to co-housing exemplars in the UK for design inspiration, including Hockerton Housing Village in the Midlands and BedZed in south-east London. “Our clients also went on a tour of hemp projects in Europe to find out more about that technology,” he says. 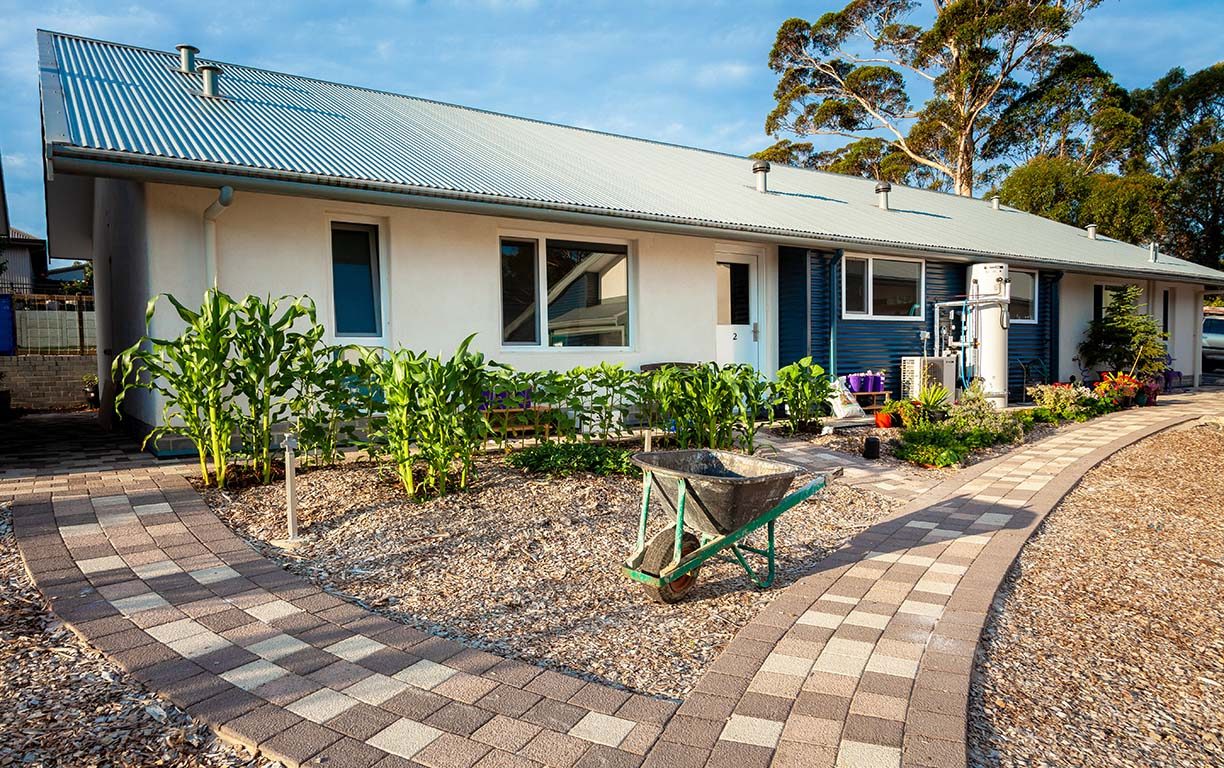 Hempcrete construction, excellent insulation and double glazing ensures very good thermal and acoustic performance; provision was made for installation of reverse-cycle air conditioners for heating and cooling, but it hasn’t proved necessary. Like these two units, each pair of dwellings shares a Sanden heat pump for hot water.

The project hit its first major hurdle when the local council rejected the development application, imposing onerous conditions before it would be able to proceed. The group challenged the ruling at the State Administrative Tribunal and it was given the go-ahead. Then, part way through construction, the head contractor AK Homes had resourcing and scheduling issues, but again the co-housing group coaxed the development along and the builder completed the project, albeit adding one year to the schedule.

The dwellings are placed to maximise passive solar orientation, with generous communal spaces between them. “The design also hides the retaining walls under the buildings,” Tom says. “The houses at the lower end of the site have two-metre-high retaining walls beneath them, to help level out the central area where the communal landscaping and community house are. We also don’t have front doors facing the street; all of the dwellings open to that central courtyard.”

The shared community house boasts a large kitchen and dining area, and guest accommodation. It’s used for weekly shared meals, meetings, house concerts and yoga classes, while the future installation of audio-visual facilities will make it the ideal spot for movie nights.

During the design stage, each dwelling was individually rated using NatHERS, achieving impressive energy ratings of between 8.5 and 9.2 Stars. Tom believes the houses will exceed the predicted performance expectations, thanks to the hempcrete walls. 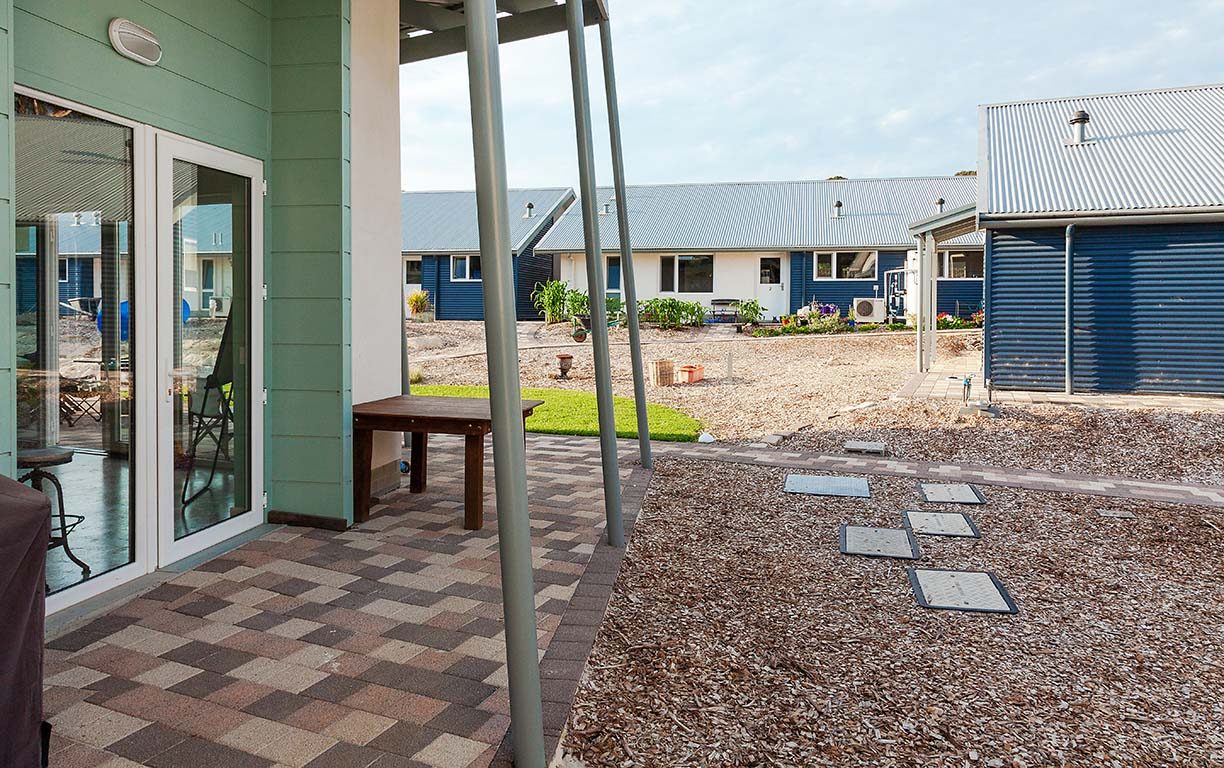 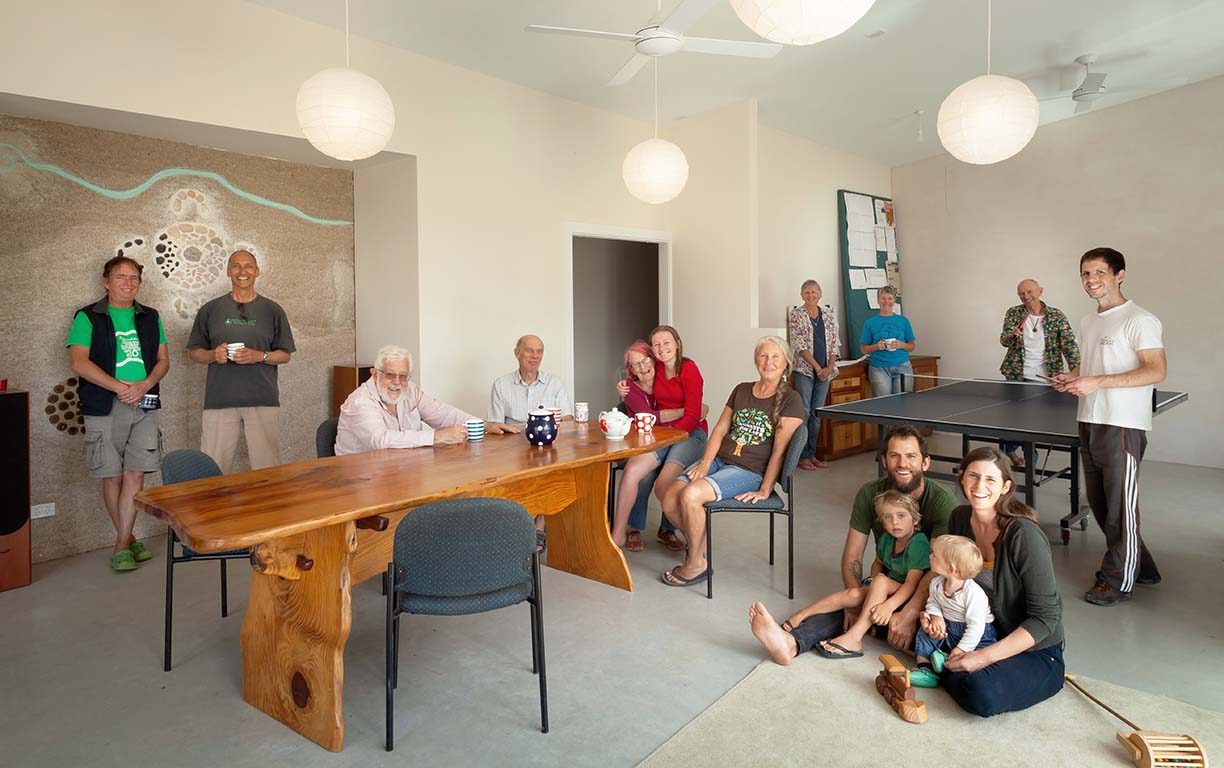 At the heart of the development, the community house has a kitchen and dining area and provides a gathering space for the residents.

“Hempcrete is such a good insulating material and the walls are 400mm thick, so it will probably perform better than expected,” Tom says. “The ratings assumed that the walls were R3, but I suspect they are quite a bit higher. This is the first full winter the owners have lived there and, even though none of the houses have heating, the internal temperatures haven’t dropped below 17 degrees Celsius yet.”

Hempcrete is similar to rammed earth in that it’s a naturally derived product; it’s made from industrial hemp that is mixed with lime and water to form a lightweight masonry that is poured into forms and tamped down, and then rendered with a layer of lime stucco. The hempcrete walls are non-load bearing – timber frames provide support for the upper floors and roof – and they are raised off the ground on brick plinths to reduce the chance of moisture damage, Tom explains.

The co-housing group’s founder Paul Llewellyn would like to see hempcrete more widely used in Australian buildings because of its excellent thermal and environmental performance. “This is a breakthrough building technology that captures carbon into its structure; it’s easy to use and it doesn’t burn,” he says. “It’s a highly insulating, breathable membrane that’s perfect for human beings to live in.”

Jess and Dave, and their daughters aged eight and five, agree with this assessment, despite their initial misgivings. “Having moved down to this cooler climate from Perth, we were apprehensive about the thermal performance,” Jess says. “This winter has been a testing ground for everyone, and the hempcrete is amazing. We haven’t needed to bring in a heater, and because of the mass of the walls and the double-glazed windows, it’s very quiet inside, which is a positive.”

She says that for her family, the community aspects of this project are possibly even more important and enjoyable than its environmental credentials. “The overall vision was to have a diverse mix of people, and we have families with teenage kids, another one with children younger than ours, and one of the original investors recently had a baby,” Jess says. A couple of the houses are rented out, so there is also a mix of owner-occupiers and tenants. 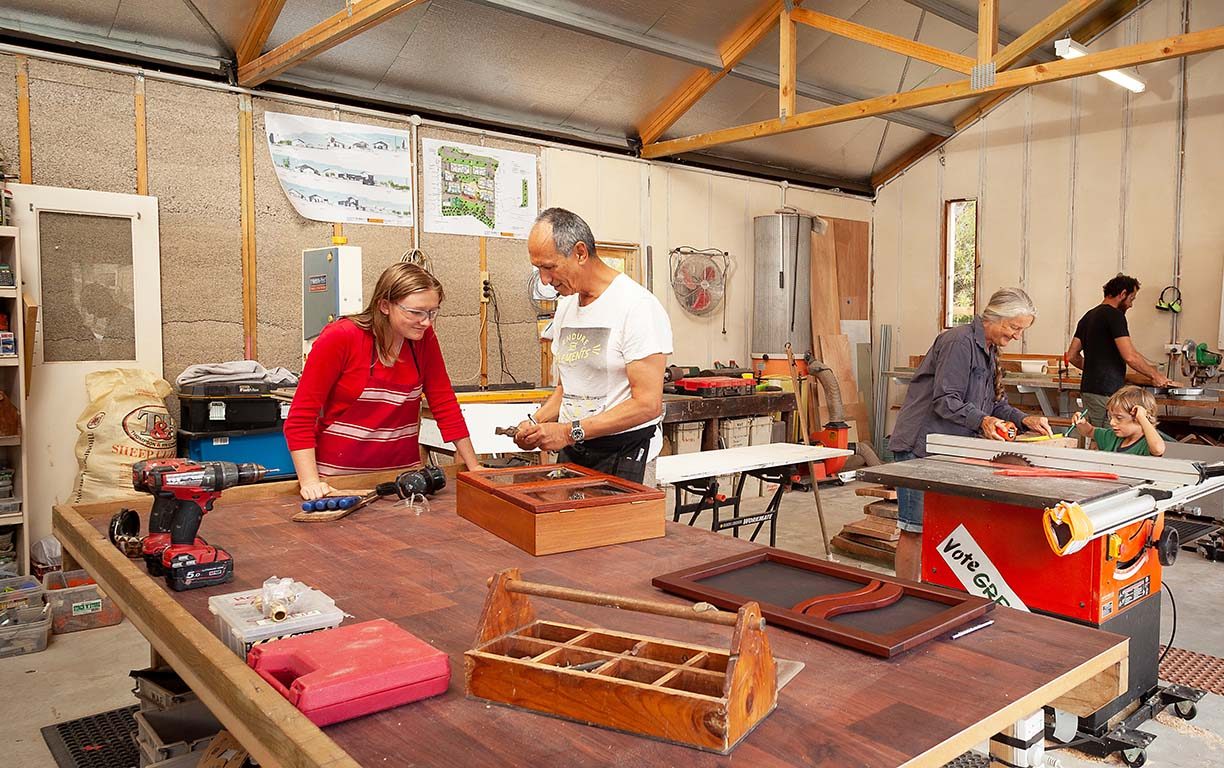 The communal facilities include a workshop, also constructed from hempcrete.

Jess and Dave had dreamed of moving to the south coast for several years, and both are pleased that they’ve made good on that dream, in an affordable way: the build cost about $1800 per square metre, which is comparable with off-the-shelf project homes, despite being architect-designed and pushing the envelope in terms of new technologies.

Tom says the cost effectiveness was achieved by keeping the overall design simple and straightforward, limiting the scheme to just three floor plans, and the fact that the group maintained strict controls around internal material selections.

“From our perspective, it’s been smooth throughout,” Jess says. “During the build stage we were up in Perth, so we’ve stepped into a completed house which is comfortable and great. The incidental connections with our neighbours are really lovely. Our kids have ready-made playmates and the freedom to move around, and seeing how the shared spaces will evolve over time is part of the fun.”