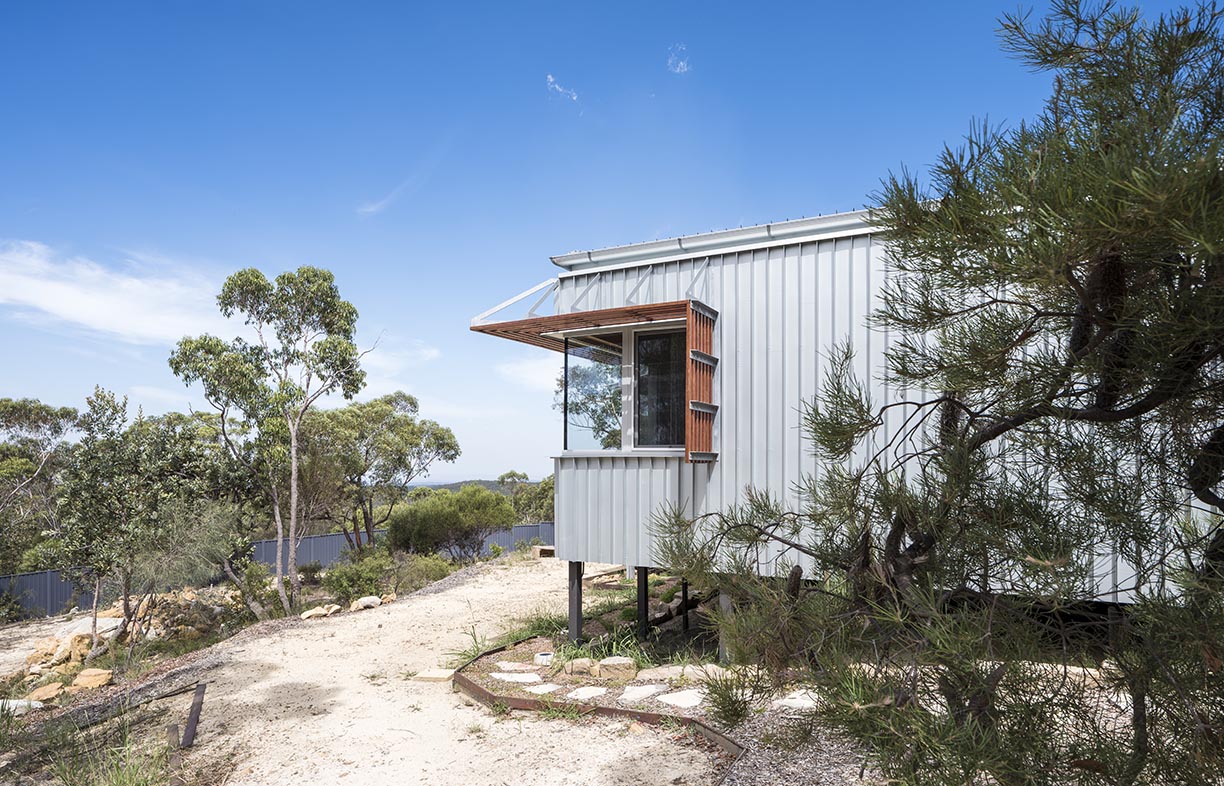 Anthea and Ian’s reimagined house faces east to make the most of bush and city views. High-performance insulation and glazing and a low window-to-wall ratio helps ensure good thermal comfort.

This mountain home demonstrates how you can achieve thermal comfort and energy efficiency despite being oriented to the east and unaided by thermal mass.

Houses typically face north to maximise passive solar design, but not all sites are oriented this way. L-House, located in Linden in the Blue Mountains, faces east to expansive views of the bush and city, and therefore required an alternative approach to creating a thermally comfortable house. With high-performance insulation and glazing, a low window-to-wall ratio and evenly distributed skylights, L-House, designed by Alexander Symes Architect (ASA), stays warm in winter and cool in summer while embracing the eastern view.

The clients, Anthea and Ian, moved into a draughty one-bedroom house on the property in 2007. “It was not designed or built for the mountains and was like living in a block of Swiss cheese,” Anthea says. In addition to their cottage, another pavilion served as a guest house and there were footings for a third pavilion, intended to become the main house. Anthea and Ian approached ASA to design a more functional and comfortable house. Done with suffering through cold winters, their chief priority was comfort.

Ian and Anthea originally wanted to maintain the two existing pavilions and create a new dwelling to the east to capture the view. “It felt like this approach wasn’t respecting the site, and the modern building would block the guest pavilion,” Alex says. Instead ASA designed an L-shaped house that retained and linked the existing structures, reusing the forms, services and structures, where possible, to reduce waste and cost. “Anthea and Ian bought the house because they love the landscape. By not building another house, it reduced the footprint of the house on the site, providing more opportunity to appreciate the environment, as well as recycling existing materials and upgrading poor performing dwellings,” Alex explains. 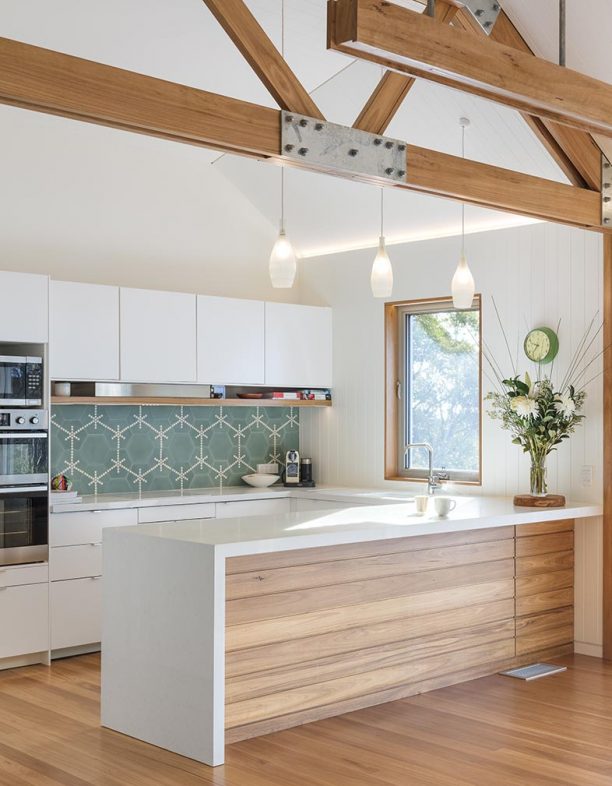 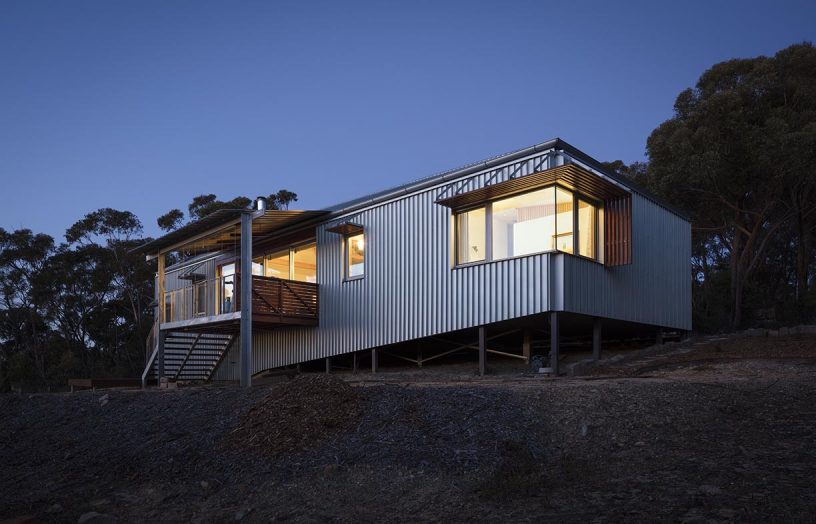 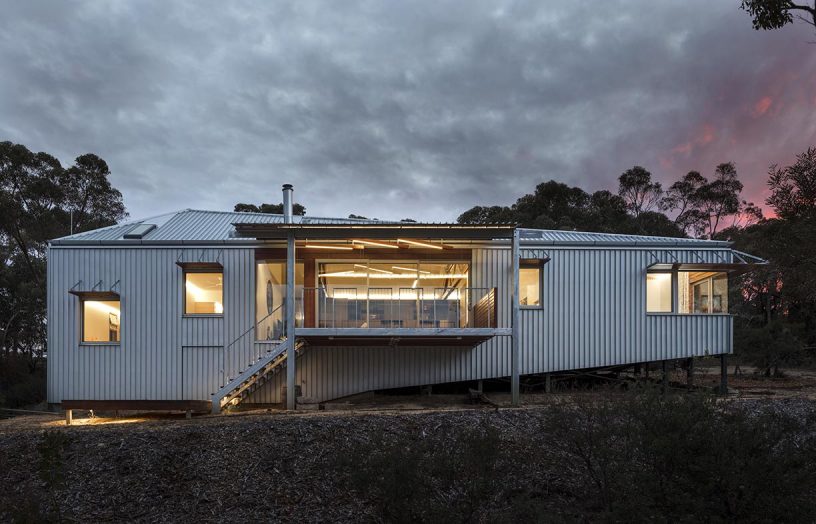 Architect Alex retained as much as possible of the structure of the two existing pavilions on the site, linking them with a cathedral ceiling in the living space. Next to the entry door, stairs lead to a fourth bedroom above the garage and to a study and storage area above the bedrooms in the corner of the L-shaped footprint.

Stripping the pavilions back to their structure and building around them, ASA took a hierarchical approach to materials. Materials remained in situ, where possible; for example, the existing framework. Stripped materials such as the cladding were reused, if possible. This material now lines the soffit on the underside of the house, and all hardwood was repurposed as feature joinery, sunshades, privacy screens, decking and cladding. Finally, new materials, when needed, were selected to have the lowest embodied energy for their functional purpose. As such, all new internal framing, structure and linings are timber. Fibre cement sheeting is used in wet areas and behind the fireplace, and Zincalume cladding meets bushfire requirements.

“Disassembling and reusing inefficient parts of a building takes conviction by a client and hard work by a contractor, and Blue Eco Homes’ material sorting and reprocessing has led to a very high-quality outcome,” says Alex. Only the bulk insulation, internal plasterboard and single-glazed windows were discarded.

The L-shaped house incorporates the two existing pavilions at the ends of each wing. It is configured with the master suite at the north-eastern end; kitchen, dining and living flowing through the centre of the house, with a deck extending to the east; and two bedrooms in the corner of the L.
A fourth bedroom is above the garage on the western side of the house, and a study and storage area above the two bedrooms.

“A northerly aspect is the most efficient way to create passive design, but you need to celebrate the attributes of the site. By creating this L shape, every functional and liveable room faces east to the view,” says Alex. To offset the easterly aspect, thermal comfort has been achieved with high-performance insulation, glazing and thermally broken aluminium window frames. A lower window-to-wall ratio helps retain heat and skylights allow for natural light throughout the house. Louvres over the deck can be closed to create shade in summer and, come winter, a slow-combustion wood heater warms the living area, with fans circulating the heat around the house. Timber joinery and flooring brings natural colour, texture and grain to the interior, and white-painted timber walls and ceiling reflect sunlight. 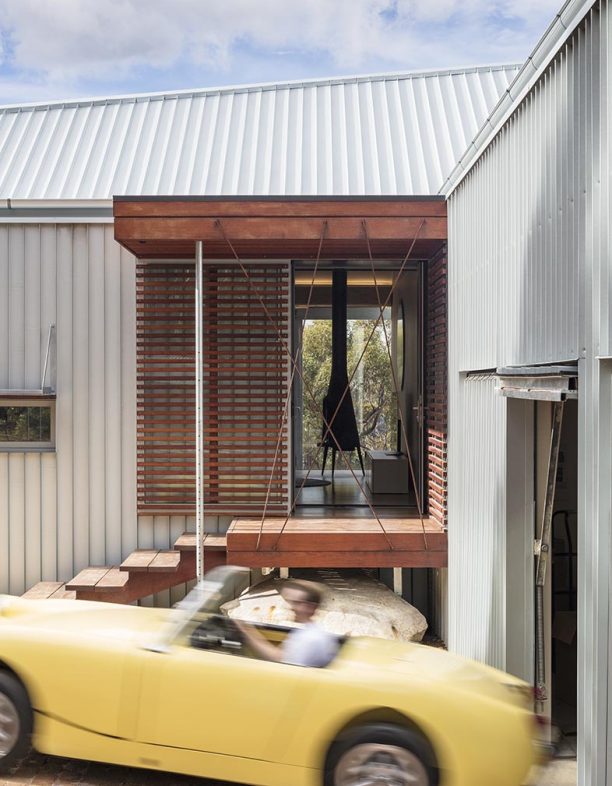 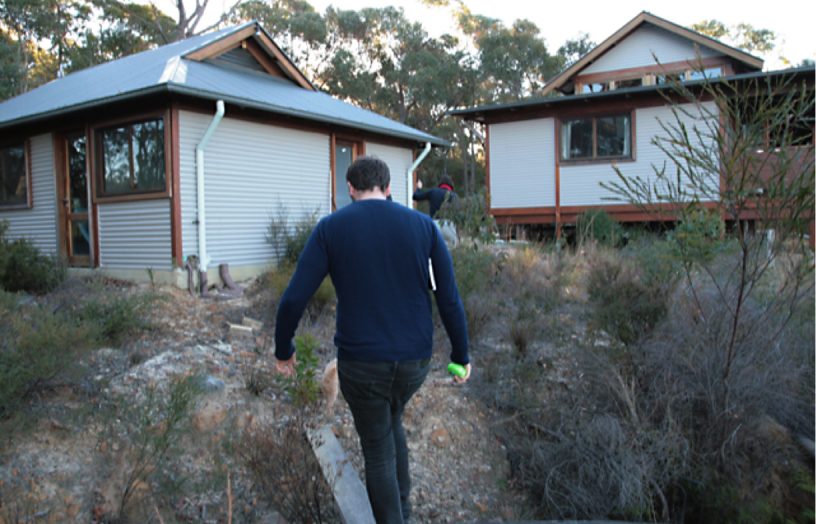 Existing solar panels were relocated to the north-facing garage roof as part of the build. The external cladding is Zincalume to meet bushfire requirements. Reusing the small and leaky original buildings (see picture bottom right) reduced the embodied energy of the build. The original house at right in the photo has become the main bedroom and kitchen; the house at left was transformed into a garage with a bedroom above. A living area now links the two.

Consultant Thermal Environments conducted a NatHERS computer simulation to determine the potential thermal comfort of the home, showing an improvement from 2.9 to 7.6 stars from the original to altered building. This exceeds the minimum 4 Stars required for new detached dwellings in NSW in 2014, when the house was designed and approved, despite being oriented away from the north and unaided by thermal mass. “This improvement is the equivalent of removing four SUVs from the road, and that quantifiable benefit shows how procurement decisions have a real-world outcome,” Alex explains.