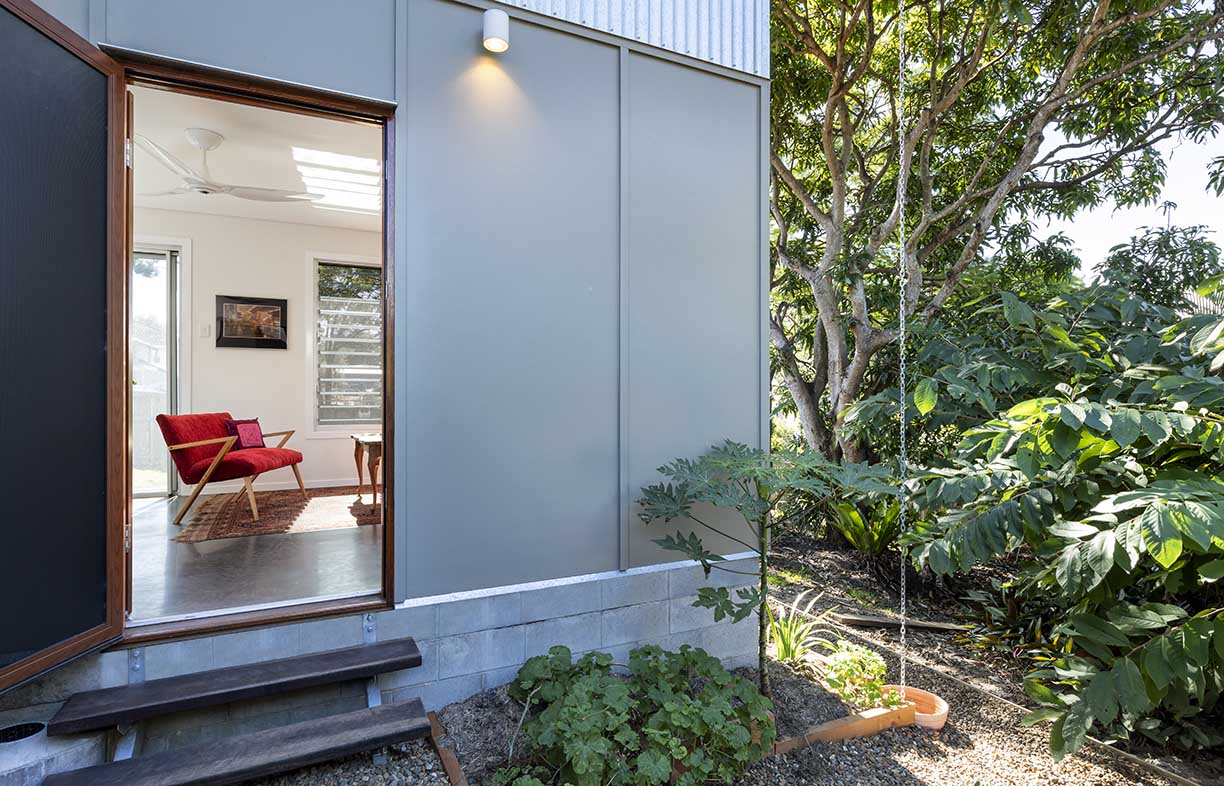 This high-impact renovation includes a two-storey rear addition and a new carport with solar panels.

Architect Emma Scragg designed a modest two-storey rear addition to a Brisbane home that has a large impact on how the homeowners live, and minimal impact on the existing house.

When homeowner Wayne and designer Emma Scragg met at an architects’ ‘speed dating’ event where Wayne was on the lookout for advice on an extension, they found they were instantly on the same page. “Emma was passionate about our project. I valued her ethics, and she was open to our ideas,” says Wayne. And as Emma recounts, “In keeping with the sustainable brief, we discussed adding as little as possible to make a big difference.”

Wayne and his partner Anita’s house in the Brisbane suburb of Carina Heights dates from the 1940s, and they had already renovated it, opening up some of the interior spaces and building a covered deck along the back. More recently, they decided to extend the house to create more space, to accommodate Anita’s extensive collection of artworks and to ensure that they could stay living in it for as long as possible. They engaged Emma to design the addition, accommodating a new bedroom and a flexible studio area that connect to the established subtropical garden. The brief was for a low maintenance, energy-efficient, private, adaptable space built with minimal intervention to the existing house.

Emma designed a two-storey rear addition with the only impact on the house being the removal of six square metres of deck to create the connecting space between the old and new; the existing roof was untouched. Reducing demolition waste, the deck stair was relocated, and the batten screens and recycled windows reused in the new carport. The addition is located along the southern boundary to make the most of the garden to the north and to capture the northern sun and easterly breezes. It is positioned and sized to minimise any obstruction of sunshine and breezes to the existing house, and to retain a large mango tree in the south-east corner of the site. 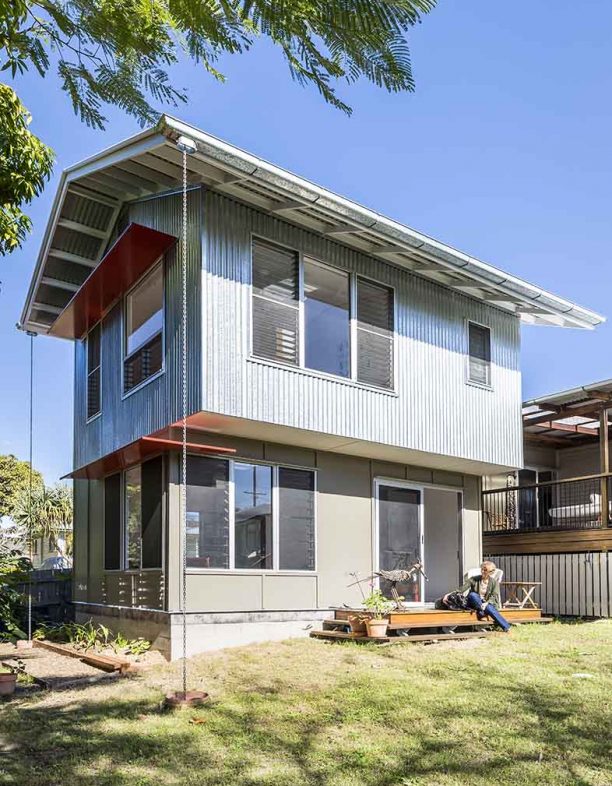 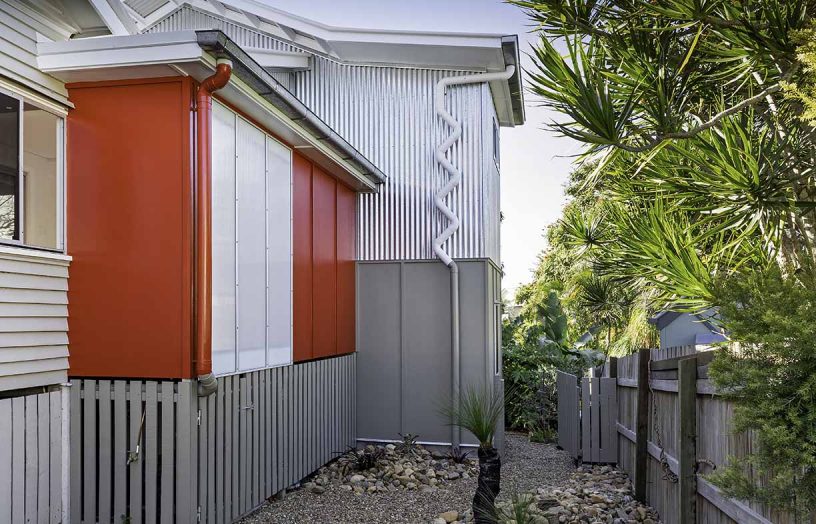 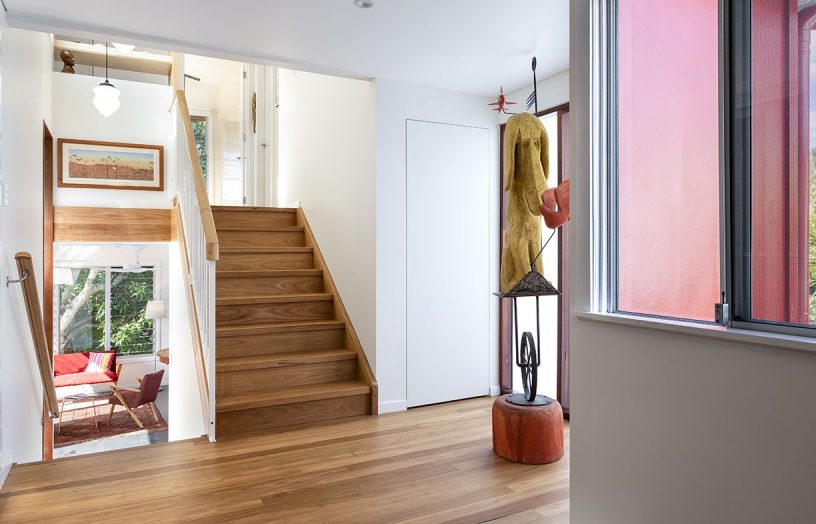 Nestled close to the southern boundary, the extension is sited to avoid blocking sunlight and breezes to the existing house. It's been designed not to need active heating or cooling, with plenty of cross and stack ventilation, eaves and awnings for shade, and great insulation. Upstairs, generous windows look out into the greenery of the mango tree, and louvres ensure maximum airflow over the bed. Downstairs is a flexible studio space and a laundry.

Creating the sense of a treehouse, the bedroom, with walk-in robe and ensuite, is upstairs with a view into the canopy of the mango tree. “It’s great to wake up in the morning and watch the birds. We are in suburbia but can barely see houses,” says Wayne. Downstairs, the studio is like a garden retreat, with a small north-facing deck and sitting steps, and there is a new laundry tucked behind which can double as a kitchenette. “All the rooms are sized just right for their purpose and designed to be private, flexible and adaptable,” says Emma.

Indeed, the size of the rooms is one of the many things the owners very much appreciate about their new house. “Appropriately sizing rooms is part of sustainability, and they’re cosy but spacious with plenty of windows for light and air,” says Wayne.

Both the studio and bedroom have north- and east-facing windows for light and ventilation. Wayne was adamant there would be no air conditioning, so cross ventilation through louvres is supplemented with floor and roof ventilation. The stairwell and floor vents act as a thermal chimney to draw cool air up in summer, and the vented bedroom ceiling and roof cavity flush the hot air out. There are also ceiling fans when needed, and insect screens that can be removed in winter. 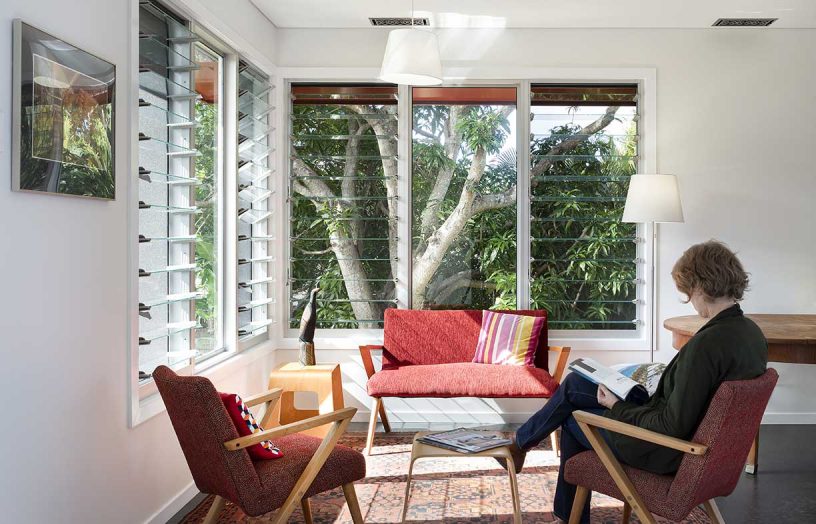 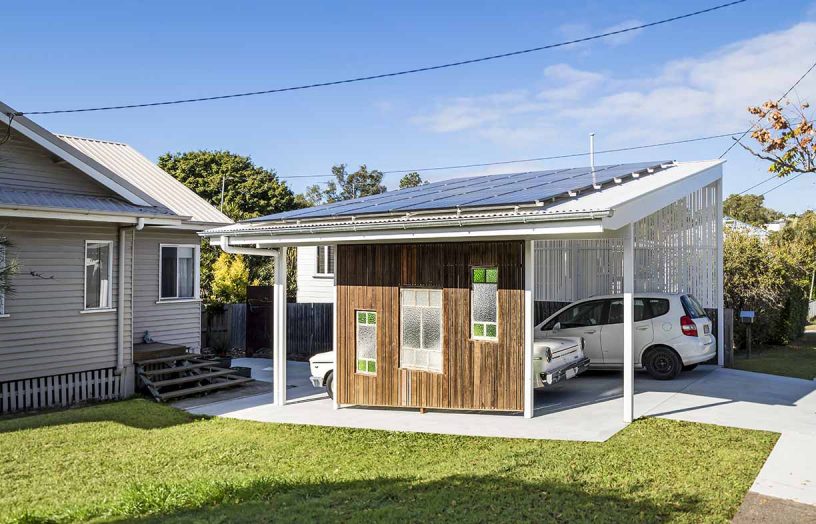 Along with the extension, a new carport was built as part of the project, designed to house a 6.5-kilowatt solar PV system (and, in the future, a charging point for an electric vehicle). The screen made from timber battens and salvaged windows was removed from the rear deck to make way for the extension, and relocated here.

Emma took a simple, practical and cost-effective approach to building materials: they are predominantly standard and off-the-shelf, but as local and sustainable as possible. “The owners wanted to do things well and to spend money where it made sense,” she says. The galvanised cladding on the upper storey is easy to clean (which is very important when close to the mango tree and visiting fruit bats), and the fibre cement on the lower storey is budget-friendly. The burnished concrete floor downstairs offers thermal and aesthetic benefits, and the seconds-grade blackbutt flooring upstairs is laid directly onto joists to avoid superfluous materials. Simple roof forms also reduce maintenance, and the industrial-sized gutters allow leaf matter to flush through.

As a plumber and sculptor, Wayne worked on the roof plumbing and flashings, as well as the quirky zigzag downpipe and decorative sheet metal sculptures. Splashes of red to the painted sculpture nook and Heka Hood window awnings reflect the fun and creativity of the owners and help make the house their home.

The house is all-electric, and a carport has been built at the front of the house with a roof designed to support the 6.5-kilowatt photovoltaic system. “It was the best place to optimise solar collection as it has clear, unobstructed access to the sun,” says Emma.

While the new work is simple and modest in scale, it has made a big and positive impact on its owners. The addition requires minimal active cooling and maintenance and had minimal impact on the existing house, while providing Anita and Wayne with comfortable, private and adaptable spaces that connect to their much-loved garden and will meet their needs far into the future.