When do investments in energy efficiency pay off? 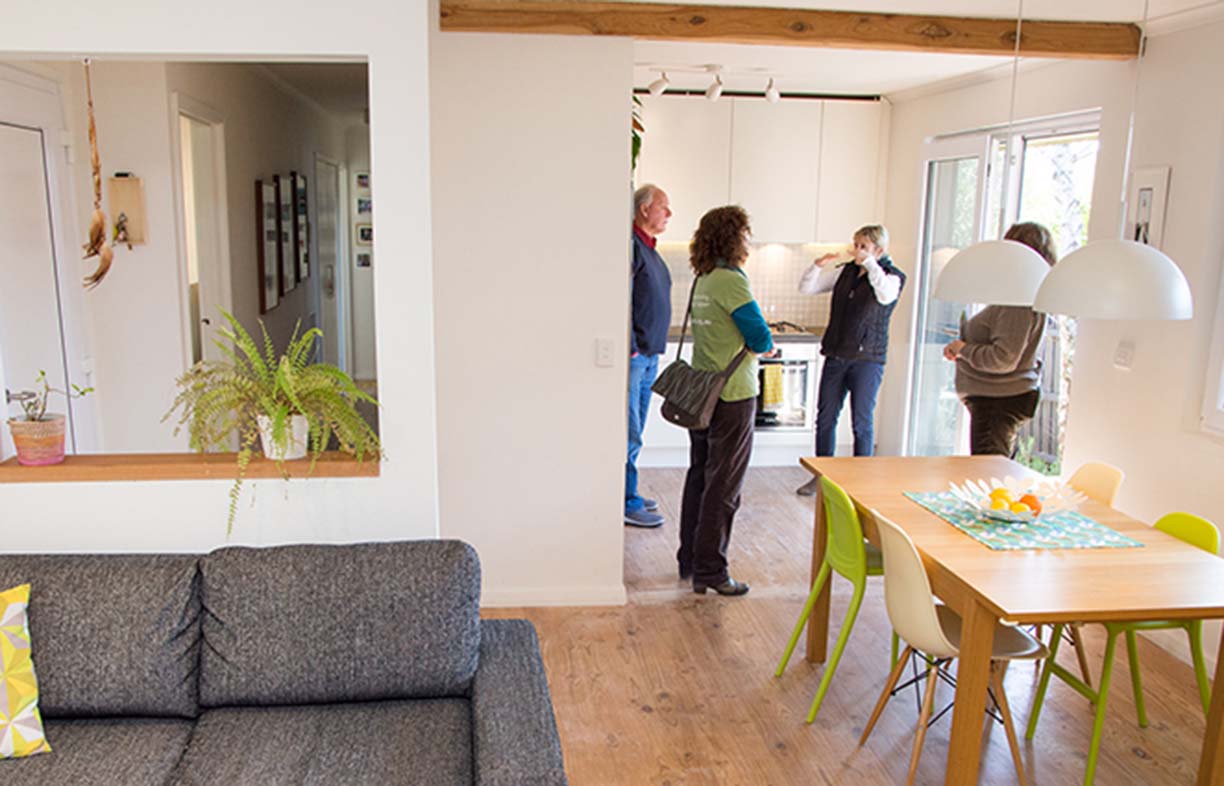 j Visitors on Sustainable House Day discover how a 0.8 Star unit was retrofitted to achieve an 8.4 Star building energy rating. See the case study on page 74 for the full story of this energy renovation. Image: Carlos Gali Photography

Energy efficiency can improve health and comfort and can be good for the hip pocket too. But at what point do retrofits start to pay off? We ask energy efficient housing experts Trivess Moore and David Whaley to find out.

While there is a relatively clear message about the energy star rating and financial ‘sweet spot’ for new housing (see Sanctuary 41), the information about retrofitting existing housing is less clear.

We are currently adding to our housing stock at a rate of one to two per cent per year. And even if new housing achieves low energy consumption from today, we still have the challenge of how to improve the other 99 per cent of existing housing.

Retrofit options for existing housing are constrained by the age of the building, its condition and the existing layout and design, in addition to general constraints of budgets and occupant needs/wants. All of these factors will contribute to what can, or cannot, be done in terms of energy retrofitting and often means more bespoke solutions are required.

Sustainability Victoria1 investigated energy efficiency upgrades across 60 houses in Melbourne built prior to 2005. They found the upgrades increased the average star rating from 1.8 Stars to just over 5 Stars. This is great news for occupants in older homes – but the question is how much did this improvement cost and what retrofits gave the best outcomes?

The Sustainability Victoria package of retrofit improvements cost between $15,000 and $25,000 per house, with an estimated payback period of 15 to 25 years due to direct and ongoing household savings of almost $1,000 a year in avoided energy costs. The program found some activities gave better ‘bang for buck’ than others. Improving lighting efficiency and addressing draught sealing had payback periods of under 7 years. However, double glazing was found to have a payback period of 270 years!

Recent research by the University of Melbourne2 has modelled housing retrofits across Melbourne. The researchers calculated costs of between $42,000 and $63,000 to lift energy performance of pre-2005 housing to a 6 Star outcome for detached housing, and $9000 to $18,000 for semi-detached housing, resulting in a payback period of at least 9 years. Interestingly, it was found to be cheaper to retrofit pre-1990 housing in comparison to housing built between 1990-2005. This is due to the larger size of the newer homes plus their relatively larger areas of glazing.

When extrapolated across Victoria, if just those retrofit activities with a payback of under 10 years were rolled out, we would save $900 million in energy bills a year. Not to mention the reduced pressure this would put on the energy network from those savings.

Similar research has been conducted elsewhere around Australia. In South Australia3  researchers modelled different combinations of retrofit activities on six typical houses built between the 1930s and 1990s. They found that the houses could be retrofitted from their initial performance of between 1 and 3 Stars to 6+ Stars. The cost to retrofit these older houses was $15,000 to $23,000 and these researchers found a payback period of 6.5 to 16 years, depending on the technology used to provide heating and cooling. They also showed that for a given retrofit the additional cost above 6 Star was matched by increased energy savings, which results in essentially a constant payback period whether you achieve 6 to 7.5 Stars.

Similar to the Sustainability Victoria research, they found that some things were more cost efficient – ceiling and wall insulation in conjunction with the double glazing of windows – while other things were more financially problematic, such as focussing on more expensive double-glazed window upgrades alone. Interestingly it was found that some double-glazed windows were twice the cost of others, but provided the same improvements to thermal performance.

The research also highlighted the importance of ensuring quality in a retrofit. The researchers assumed that insulation was installed correctly where gaps did not exist; this is often overlooked yet is critical as it has been shown that just a five per cent air gap in batt insulation can reduce its effective R value by as much as 50 per cent.4

What the research shows is that there is no one answer fits all for finding a set of retrofit solutions or what the best ‘bang for buck’ is in terms of star rating performance. However, retrofits of existing housing should seek to at least meet the current minimum 6 Star requirement for new housing and should be able to do so within a ‘reasonable’ financial outlay.

However, there are some broad approaches which can help any potential retrofit: