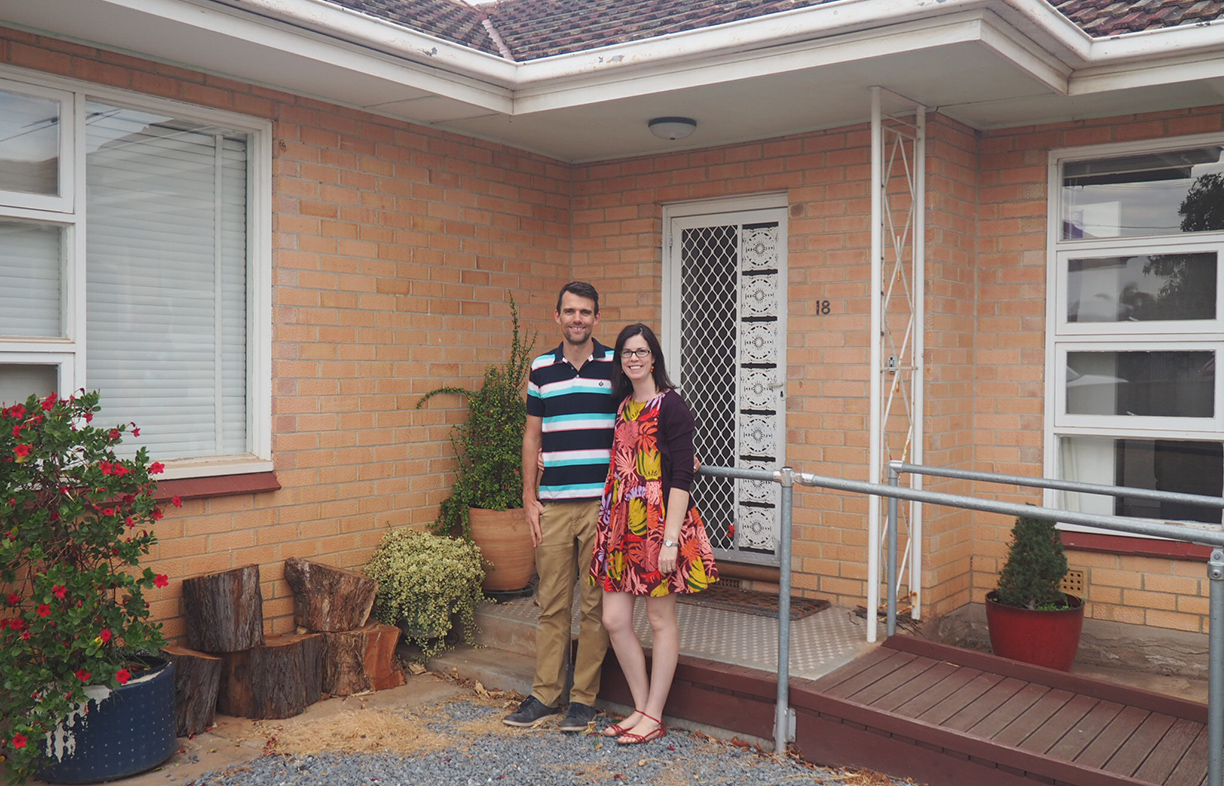 Martin and Anaise’s Adelaide home is a solid 1950s double brick house with lots of garden space at both front and back. They would like to extend it and improve the connection to the outdoors.

Anaise and Martin Cotrell are in the planning stages of extending their 1950s double brick home in Adelaide to provide more living space for their family of five. They are keen to make it as sustainable and as energy efficient as their budget will allow, and to make the most of their north-facing backyard. Paul Worroll of Reddog Architects offers an alternative, pavilion-based design.

“An ideal home atmosphere for us is one of strong family relationships and fun together,” says Martin, “but also with space to be apart but not alone.”

He and his partner Anaise would like more living space for their rambunctious family of five-year-old twins and a two-year-old. They are lucky to have a solid existing home on a large block close to the sea in Adelaide, with a north-facing backyard and plenty of open space to the south too.

Along with their designer Thomas Klee of 3D Design and Drafting Adelaide, they have planned an extension that adds a kids’ playroom and a main bedroom with ensuite in the elbow of the house’s current L shape, and extends the living room out into the existing carport on the eastern boundary. However, they wonder whether this is the best approach, and in particular have questions about how to maximise passive solar performance, ventilation and natural lighting.

Sustainable architect Paul Worroll has plenty of experience reimagining homes and designing for seamless indoor-outdoor transitions (see ‘Eighties revival’ in Sanctuary 46 for a good example). He offers Martin and Anaise some suggestions for an alternative layout for their extended home, based around separate living and sleeping zones and incorporating two considered outdoor ‘landscape domains’. 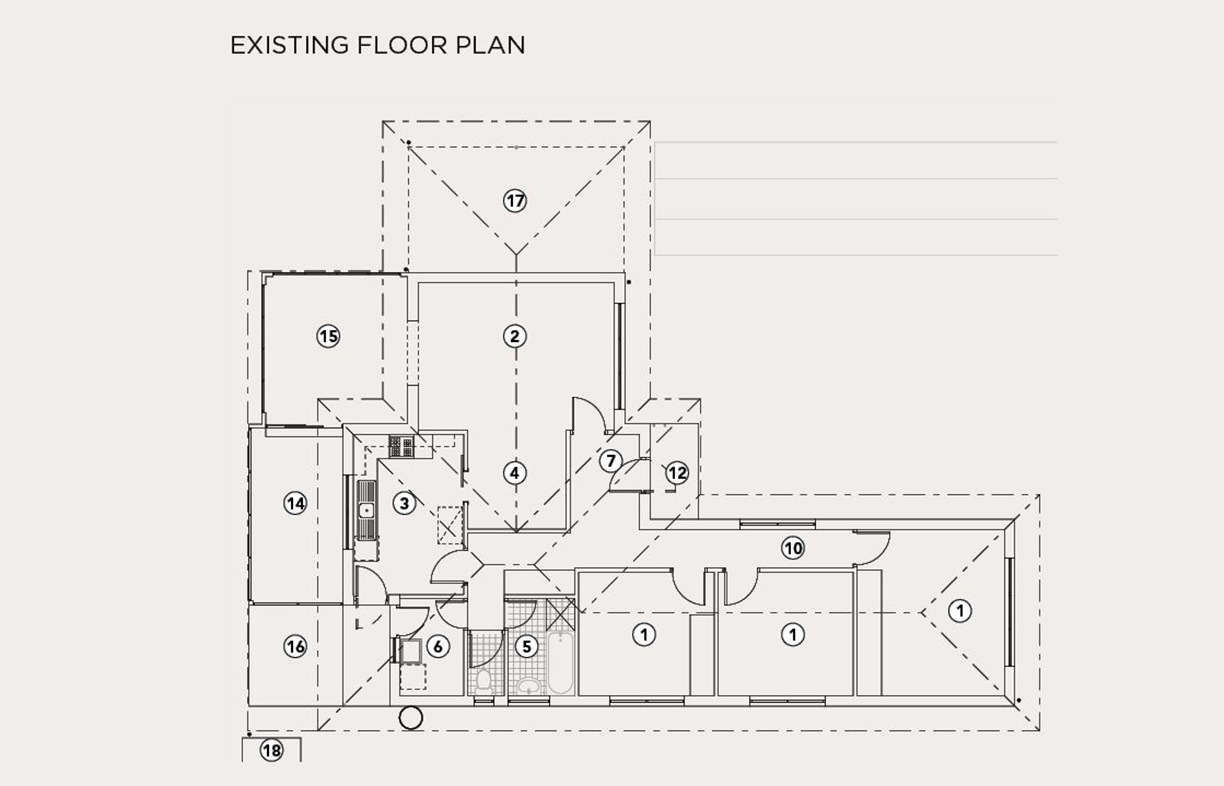 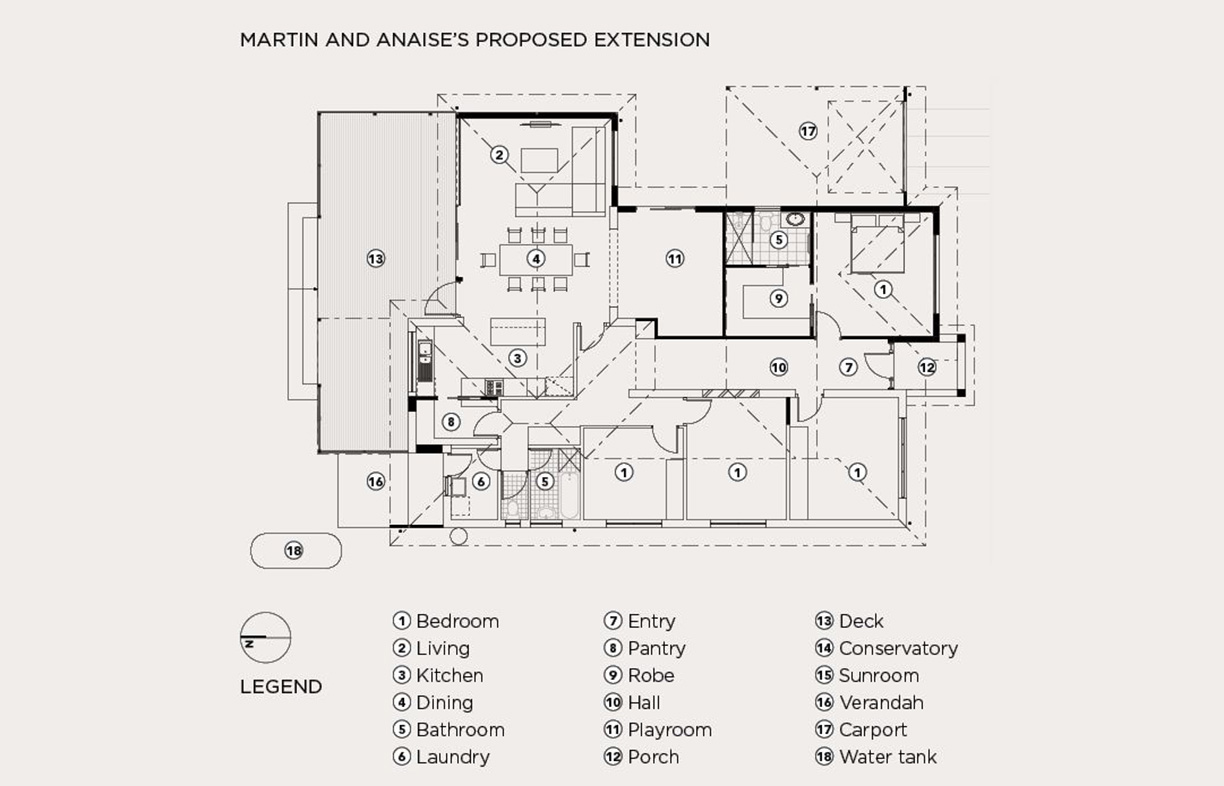 I commend you, Martin and Anaise, for your interest in getting the most workable and energy efficient extended house possible.

The house is currently disengaged from the landscape and is dominated by a long driveway and car storage. Arriving at the house is defined by car access and the pedestrian entry is undefined from the street.

Along the eastern boundary the house is bordered by neighbouring carports, a garage and a shed structure. Responding to this will be important in terms of privacy and prospect.

Internally the house is introverted and the connection to the outdoor space is limited by the arrangement of the kitchen, entry and a centralised dining space. The relationship of spaces and circulation through the house is also confused.

The expanse of outdoor space to the street presents an opportunity to engage with the street and re-prioritise the pedestrian entry over the vehicular entry.

With the addition of more rooms – a children’s retreat and a master bedroom – there is also an opportunity to clearly define public (living) spaces and private (bedroom) spaces whereby the kitchen becomes the pinwheel to the organisation of the house, the social hub where the family can meet and gather, and yet they have other spaces to which they can retreat for privacy or quiet time.

Opening the public spaces (living/dining/kitchen) to both the north and south would provide an opportunity for a more sustainable solution in terms of daylighting, ventilation, and heating and cooling. 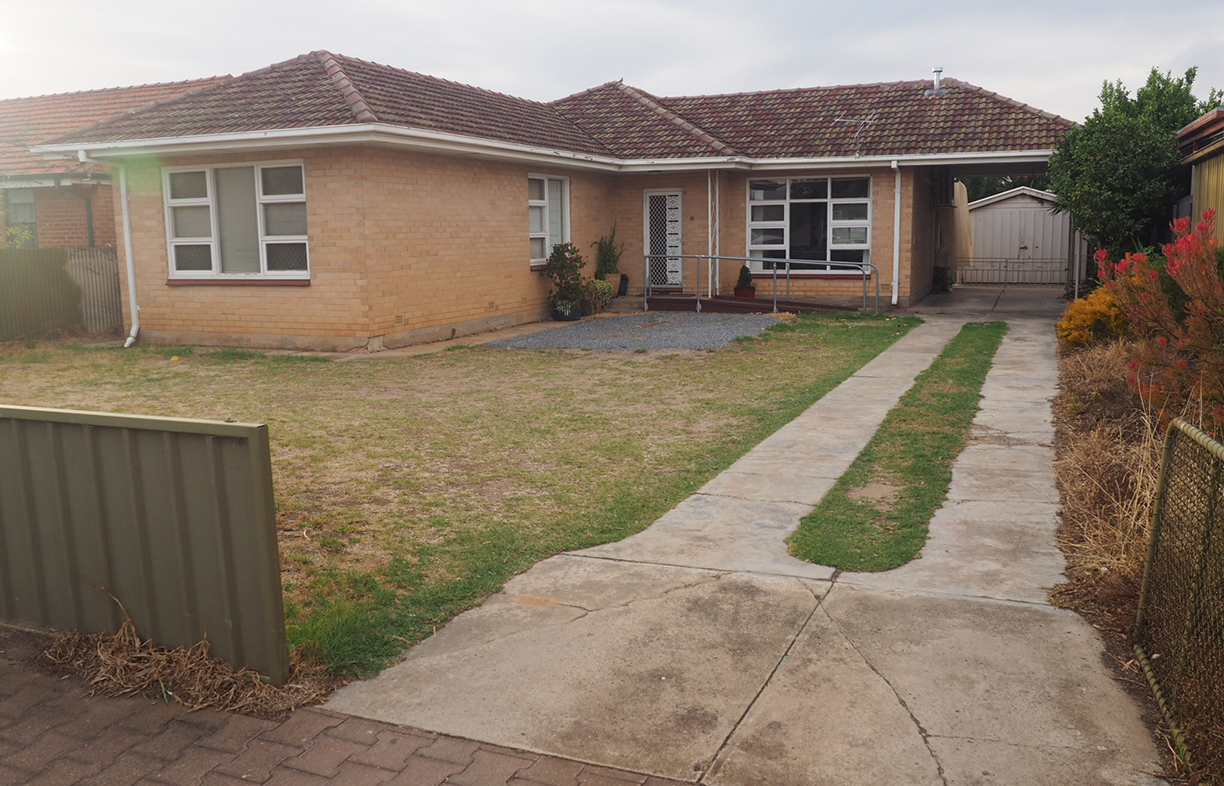 Plenty of potential. Paul suggests designing the extended house as two clearly defined zones – living and sleeping – each with connections to the outdoor spaces.

I believe that the layout of the house could be improved by relocating the carport to the street edge and then creating two landscape domains. The two landscapes can provide a variety of scales and prospects, and variability of light into the house.

The more private landscape is to the north of the existing house, whilst the more public landscape is to the south, with an engagement with the street. The carport structure could be used to frame or create a barrier to the street and enclose the front courtyard space if desired. The level of enclosure to the street could be mediated with screens, openings and soft landscaping. The front courtyard can also provide a much clearer, more legible entry to the house.

A second more intimate landscape is preserved to the north of the house and may have a different scale, character and feel to the entry court. Removing the existing rear sunroom and deck space and extending the living space to the eastern boundary creates a strong linear space at the core of the house. By opening the middle of the building form to the north and south the house is allowed to breathe, encouraging cross ventilation and optimising natural daylighting.

In my proposed plan, two zones are defined for the house – living and sleeping. The core of the building form oriented on an east-west axis acts as a generous kitchen/living pavilion. This becomes the heart of the house – where the family gathers, eats, relaxes and socialises. A simple plan also offers flexibility to the layout of this space in terms of how the kitchen, dining and living spaces are arranged.

The sleeping zone and amenities could be in a linear form along the western edge of the site. Placing the master bedroom to the northern end of the bedroom wing offers an opportunity to create an edge to the rear court and also creates some separation of parents and children. The bedroom wing achieves some views into the two courtyard spaces front and back.

A kids’ retreat or play area could be located in another pavilion along the eastern boundary, with visual connection back to the main living pavilion yet with some separation of adults’ and children’s activities when needed. 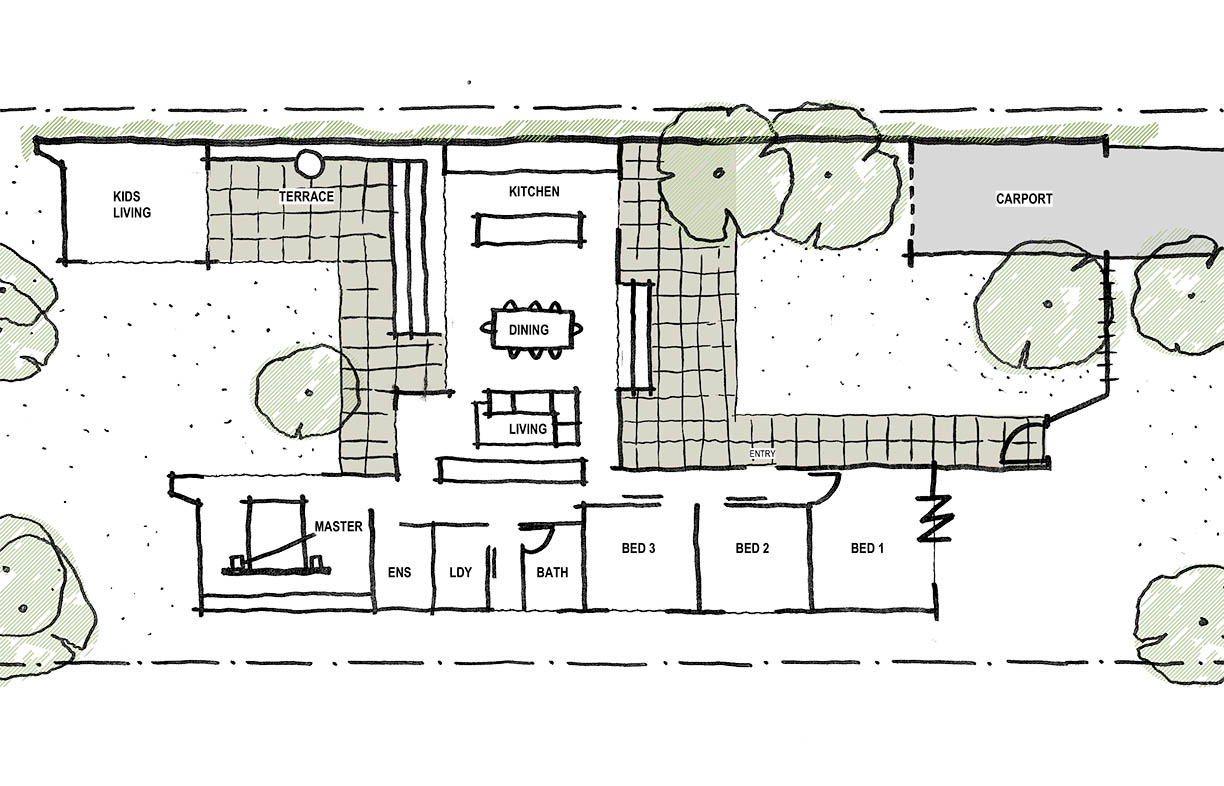 In terms of achieving maximum sustainability, a number of strategies could be adopted, which include the orientation of the house on an east-west axis to take advantage of sunlight in winter and prevailing breezes. A slab on ground for the new spaces would allow for good thermal mass, providing passive heating in winter and a cool space in summer.

In contrast with the lower ceiling spaces of the existing building form, I recommend raked or higher ceilings to the new living spaces, with operable skylights that can be utilised for good natural daylighting, cross ventilation and purging of warm air in summer. The higher ceilings would also create a variety of volumes and spatial experiences. Good overhangs and deep window reveals would provide good sun shading and help avoid overheating of the internal spaces.

A north-facing roof over the kitchen/living pavilion would allow an opportunity for a solar PV array and solar water heating.

Brickwork could be the material that stitches the house and the landscape spaces together, by using it for walls, seats, planter boxes, external fireplace and paths. Possible re-use of existing roof tiles could be considered. Other material selections should be carefully considered based on their sustainability aspects.

Details
Project type
Extension
Location
North Brighton, SA
Size
Existing house 100m2, land 640m2
Budget
$200,000
About the author
Paul Worroll has over 25 years experience in all aspects of the business and practice of architecture, and established Reddog Architects in 2001. He has a passionate interest in sustainability and is the current chair of the Queensland Institute of Architects Sustainability Committee.

Want us to Design Workshop your house?

Want more feedback on how to make your home more sustainable? In our Design Workshop we invite a designer to provide comprehensive feedback and suggestions to help make a reader’s build or renovation project even greener. Perhaps it’ll be you next! To apply, email sanctuary@renew.org.au with your plans and a brief outline of your project.