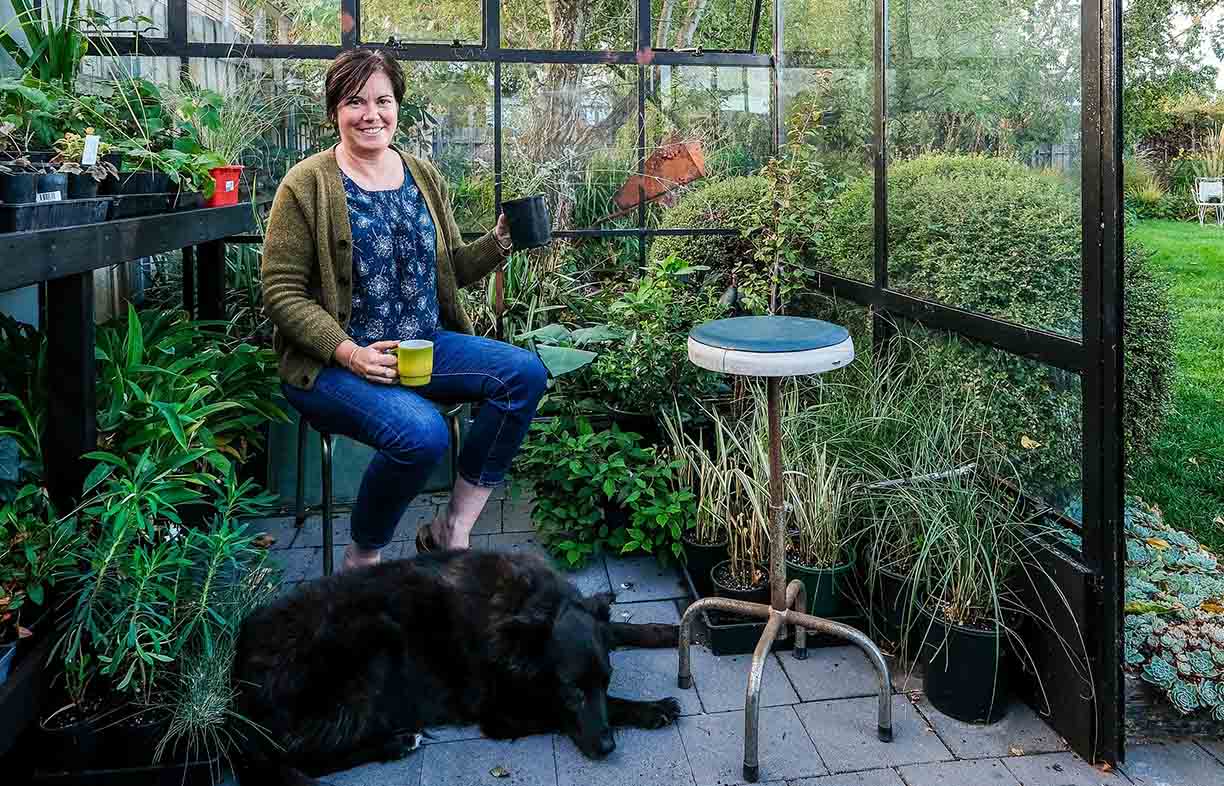 Are we in a new golden age of conservatories? Secondhand glazing is being given a new life as greenhouses – but far from being plant-only spaces, we visit five conservatories which double as cosy extra rooms for relaxation.

When Elaine Bayes and Damien Cook purchased their home near Fryerstown in Victoria’s central goldfields region several years ago, it was unloved, had been on the market for years and was strewn with junk and old building materials.

Standing out amongst all the materials however, were 10 very large wooden-framed windows – some with smashed glass – stacked all around the deck. Rather than sending them to landfill or to the recyclers, these windows became the genesis of a plan that continues to enrich the couple’s lives daily.

“I really like Thai food and I’d always wanted to grow the ingredients of Thai curries, like lemongrass, curry leaves, chillies, ginger and galangal,” says Damien. “I looked at the windows and thought, we could just stick these together and make a glasshouse.”

While the construction of their greenhouse wasn’t quite as straightforward as simply ‘sticking’ the windows together, involving plenty of trial and error and tweaking to improve its functioning, Elaine and Damien have now realised their dream to grow their own curry ingredients and more. Growing alongside the tropical herbs and spices are towering sub-tropical fruits, including babaco (a cool-climate pawpaw), tamarillo and banana, which says volumes about the value of a greenhouse, especially when factoring in central Victoria’s biting winters and that their property straddles a gully.

It was this same thinking that led the Romans to construct wheeled cucumber growing beds – allowing the plants to be grown in full sun during the day and wheeled inside for frost protection at night. By the sixteenth century, wealthy northern European landowners were constructing conservatories or ‘orangeries’, allowing the cultivation and preservation of frost-tender citrus fruits, brought from the Mediterranean by traders.

The key to their function is within the word itself. Derived from the Latin word conservator (keeper, preserver, defender), the word conservatory was first used in the English language in the 1660s to describe a construction functioning as a greenhouse. But it was also during the 1600s that their use extended beyond purely functional. The growing of exotic plants and fruit became a status symbol and the wealthy began entertaining in their conservatories to show off their collections.

Advances in glass production and heating technology during the nineteenth century ushered in what is described as the ‘golden age of conservatories’, especially in the United Kingdom, where the building of grand public conservatories became something of a national pastime. Culminating in the Great Conservatory at Syon Park, the Palm House at Kew Gardens and the 564-metre-long Crystal Palace built for the Great Exhibition of 1851, the nineteenth century cemented the value of the conservatory with extreme flamboyance. 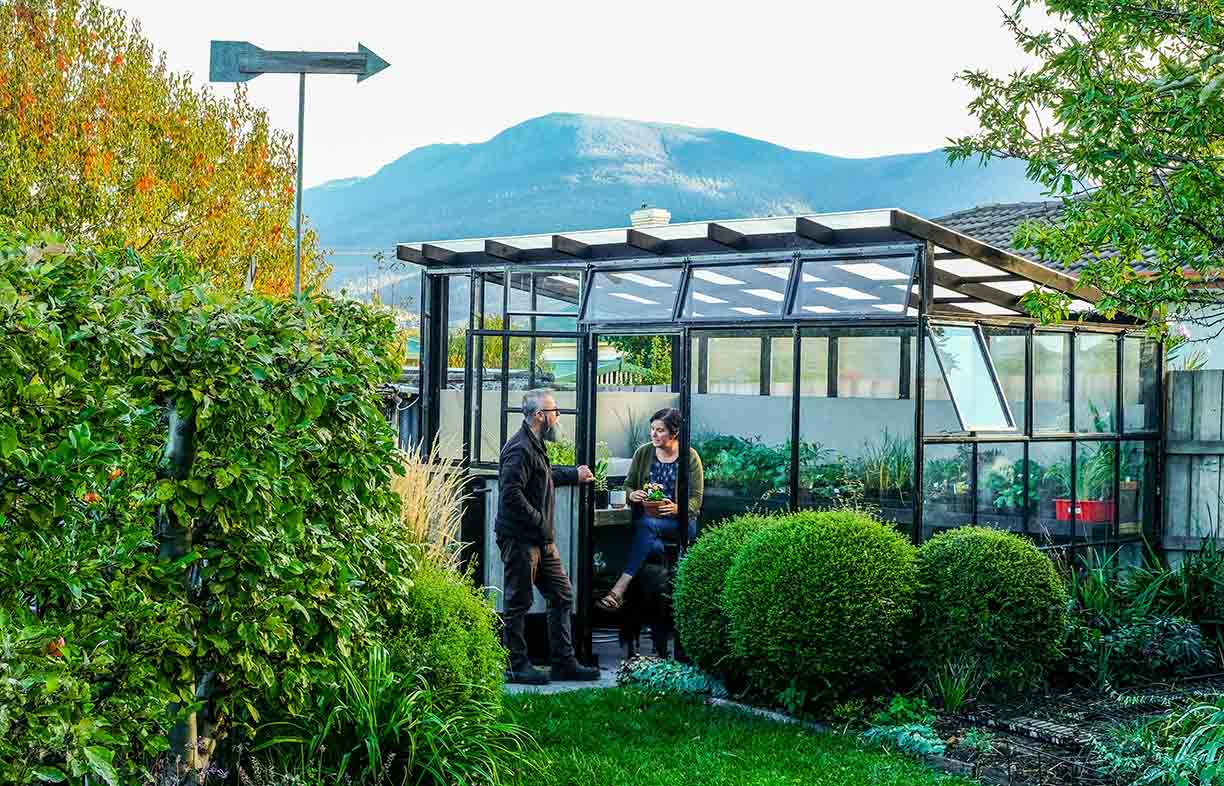 Tasmania is ideally suited to glasshouses, and this Hobart conservatory is constructed from secondhand steel-framed glazing, polycarbonate roof and reclaimed concrete pavers for thermal mass. Sheltered from the weather, Susan and Cameron use the space as an extra room for relaxation.

Moving forward into our increasingly waste and carbon conscious world, there’s a growing number of people, such as Elaine and Damien, who want to tap into the many benefits of having a conservatory at home, but are eschewing flamboyant structures and unnecessary use of resources and new materials. Utilising available sources of recycled and re-purposed materials, these conservatories are highly efficient, surprisingly pleasant to spend time in and imbue their owners with a clearer conscience that they’re reducing their environmental impact.

For Hobart garden designer Susan McKinnon and her husband Cameron, constructing a conservatory exclusively from new materials was never an option. Aiming to build their conservatory from recycled 1950s steel-framed windows, Susan and Cameron spent close to six months sourcing the windows; some as they were removed from old housing commission properties, while others had found their way to Hobart’s famed Tip Shop. “It’s just how we do things,” says Cameron.

The windows were “wrangled” and “coerced” into place to form the walls of the conservatory. “That’s the beauty of steel,” says Susan, “it can literally be cut and welded into the required size.”

While most of the materials used in the construction were recycled, new cement sheeting and treated pine were used around the interior work areas to provide longevity in wet areas, and a clear polycarbonate roof installed for safety.

Nestled quietly into a side of the couple’s peaceful garden, against a backdrop of Kunyanyi (Mt Wellington), the conservatory window frames were painted black to help it blend into the greenery and not dominate the space. Built primarily for Susan to propagate plants for her garden design work, they both find themselves increasingly drawn there to read, or enjoy a tea or wine, and simply relax.

“There’s nothing like walking into a space filled with growing plants, laden with the scent of flowers and green leaves. Often there’s high humidity, which can make them uncomfortable to sit in. But generally, they’re warm and fragrant spaces that are perfect for at least a few chairs. I think anything that encourages multifunction is great,” Colin says.

Built primarily to propagate plants, we find ourselves increasingly drawn to the conservatory to read, or enjoy a tea or wine and simply relax. 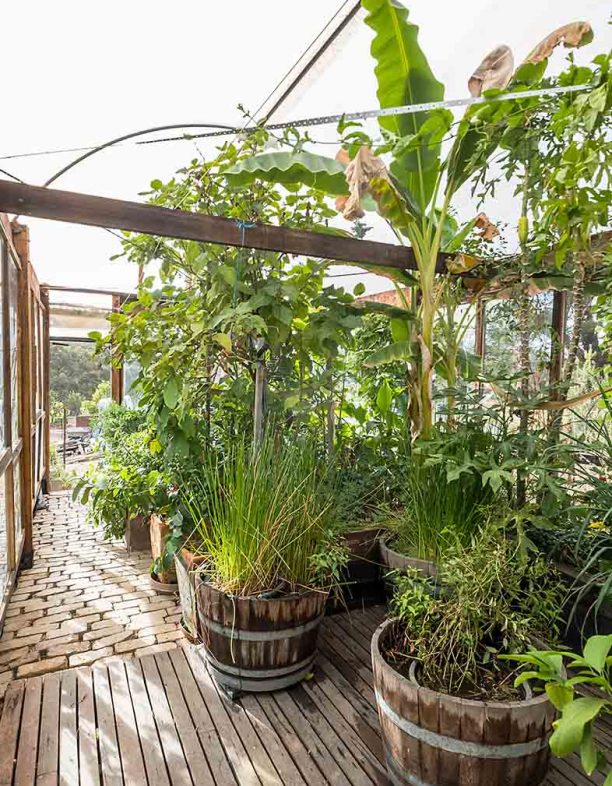 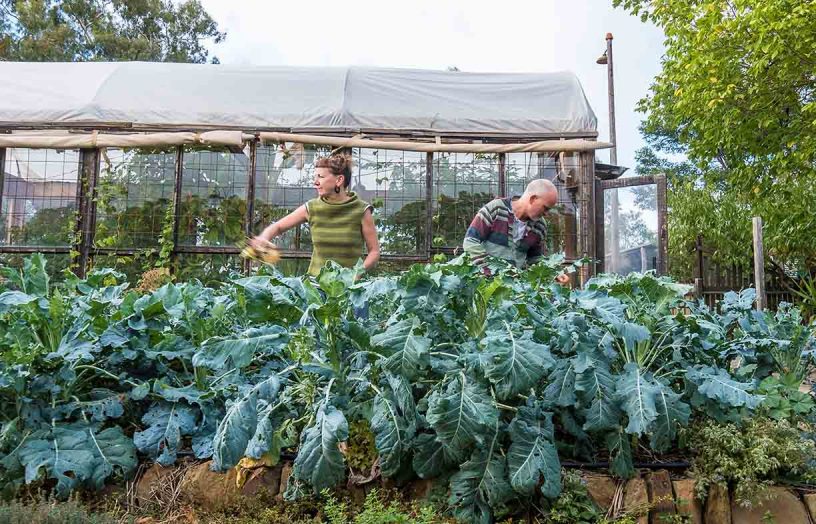 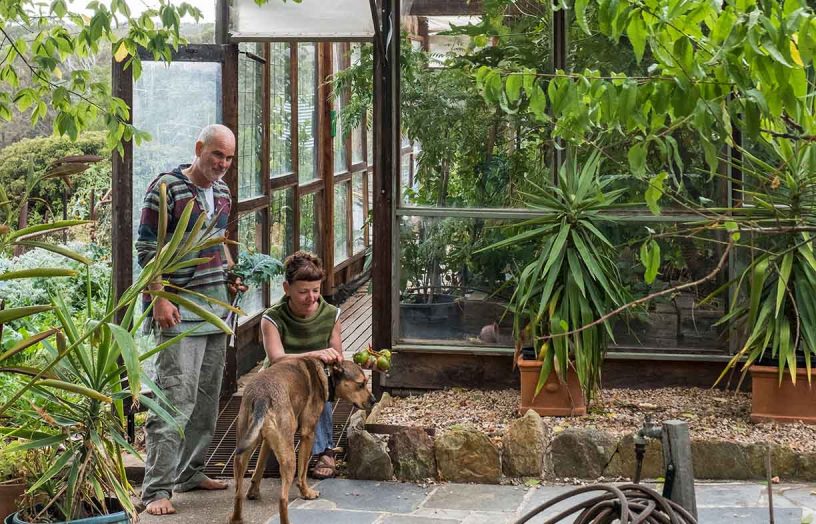 Ventilation is essential for glasshouses, especially in summer when inside temperatures can climb to 50 degrees Celsius; shade cloth can be rolled down to reduce solar gain when required. Built with secondhand, timber-framed windows, secondhand louvres and plastic roofing, Damien and Elaine are able to grow tropical fruits in winter, despite their central Victoria location.

Multifunction was front of mind when kitchen gardener and educator Mara Ripani and her husband Ralf Pfleiderer incorporated a conservatory into the north side of their new light-earth home.

Filling the roles of both conservatory and sunroom, the large timber and glass room is designed to bring warmth directly into the house during the cooler months, and also function as a place to propagate vegetables from seed, grow perennials such as avocado, turmeric and ginger, as well as a place to dry fruit during summer, and dry clothes (on ceiling hangers) all year round.

“It’s connected to the passive areas of the house – the bathroom and the lounge room – where you would be sitting or changing, and acts as a heater, saving on energy costs,” Mara says.

Immediately in front of the conservatory is Mara’s huge free-form kitchen garden, for feeding her family and farm-stay guests, and which will supply her kitchen classes in the future. Propagation in the conservatory will drive productivity in the kitchen garden, and Mara has a month-by-month schedule of activities already mapped out, despite its recent completion. When Sanctuary visits, Mara and farm-stay guest Naomi Mølgård are brimming with excitement as they busily plant the first seedlings in the conservatory.

Back in Tasmania, in the hamlet of Paradise, on the edge of the Great Western Tiers, Elizabeth Zuluaga is busy with a different stage of her conservatory lifecycle. She’s pulling out tomatoes that are no longer productive and pondering what to plant in their place.

Elizabeth was lucky in that she didn’t have to conceive a bespoke conservatory, but managed to find a 1960s hothouse for sale once belonging to “Mrs Garden Club of Sheffield” after she’d passed away. It was moved to Elizabeth’s Paradise home and reassembled with a stone wall built along its western side to act as a heat bank and provide thermal mass. Wicking beds were then built into the conservatory, an automatic watering system installed and a solar pump activated water feature built into the stone wall to maintain humidity.

Dedicated to living a sustainable, self-sufficient life, Elizabeth’s conservatory sits alongside her orchard and vegetable garden. For her it’s a workhorse and a “work in progress”. “It feeds me year-round,” Elizabeth says. 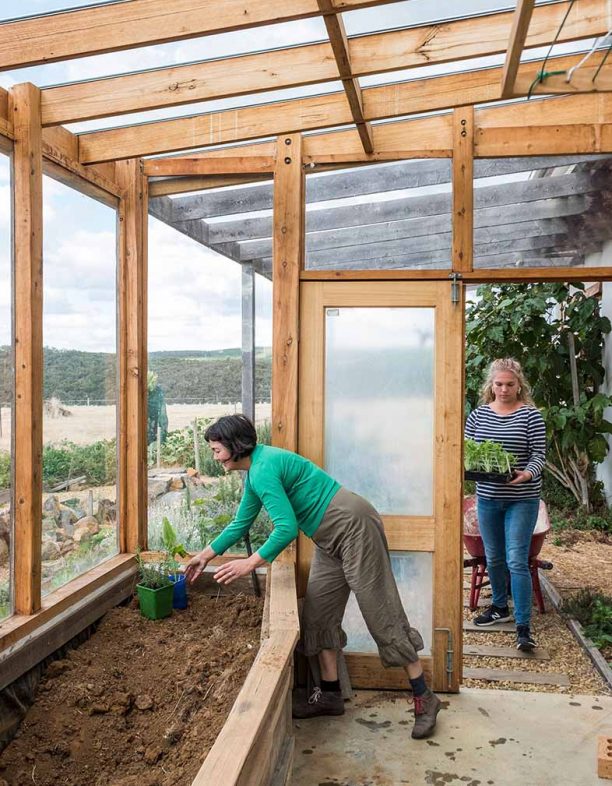 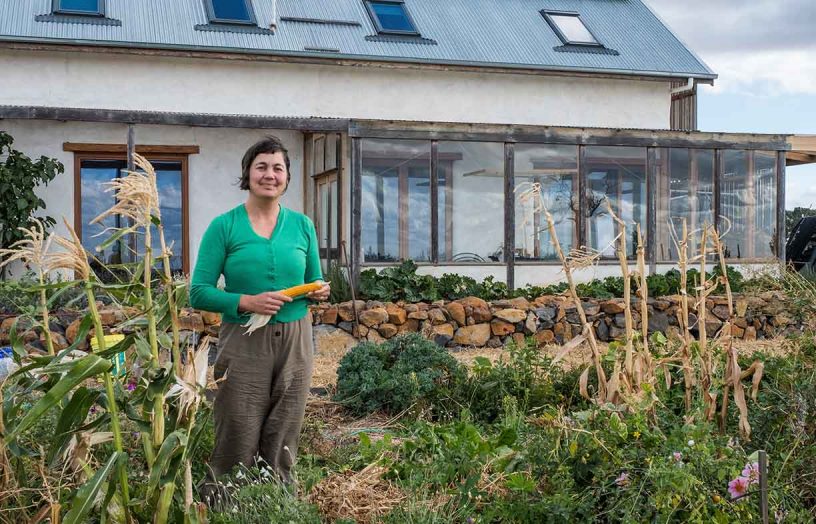 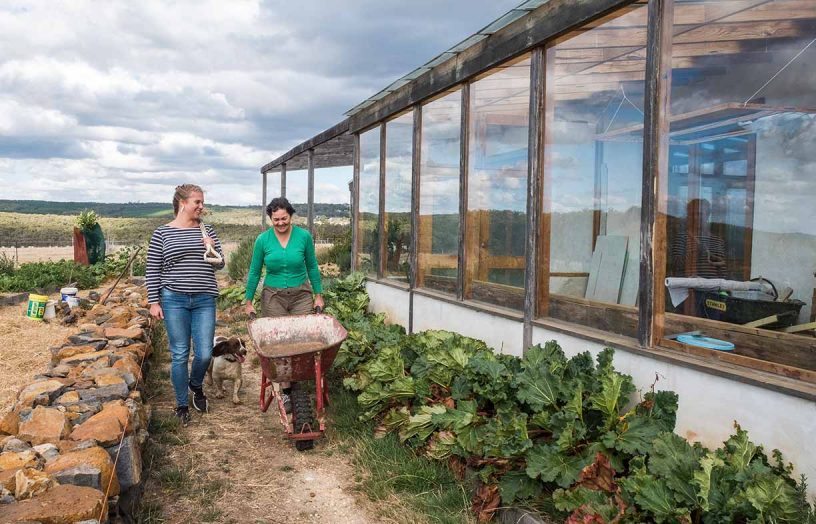 The north-facing conservatory at Mara’s house near Daylesford in Victoria is part of her large kitchen garden. Attached to the house, it acts like a wintergarden helping passively warm the bathroom and lounge, plus provides a sheltered space where clothes can be hung to dry.

“It’s the real deal in here,” she explains, “but I still enjoy having a bit of fun with experimental plantings. One year I grew babaco, which reached the ceiling, but didn’t actually taste that great. I regularly grow cantaloupe (rockmelon), which ripens on the vine and ruins you for ever being able to buy cantaloupe again,” she says.

There are obviously a multitude of reasons for introducing a conservatory into your home and many ways you might go about constructing one, but what unites all of the projects here is that a conservatory needn’t cost the earth, doesn’t need to come off the shelf at the hardware store, and definitely has the capacity to make an ongoing positive contribution to your life and reduce your impact on the earth’s resources.

The willingness to have a go, experiment and accept a bit of trial and error also unites all of the people behind these conservatories. Not everything always goes to plan, like much in life. Elaine and Damien’s first crops literally cooked on the plants due to a lack of ventilation, for example. And even after ventilation was introduced, Damien has never been able to use the conservatory as a yoga space as planned. “It’s just too hot and uncomfortable,” he says. “But the frogs love it,” adds Elaine. 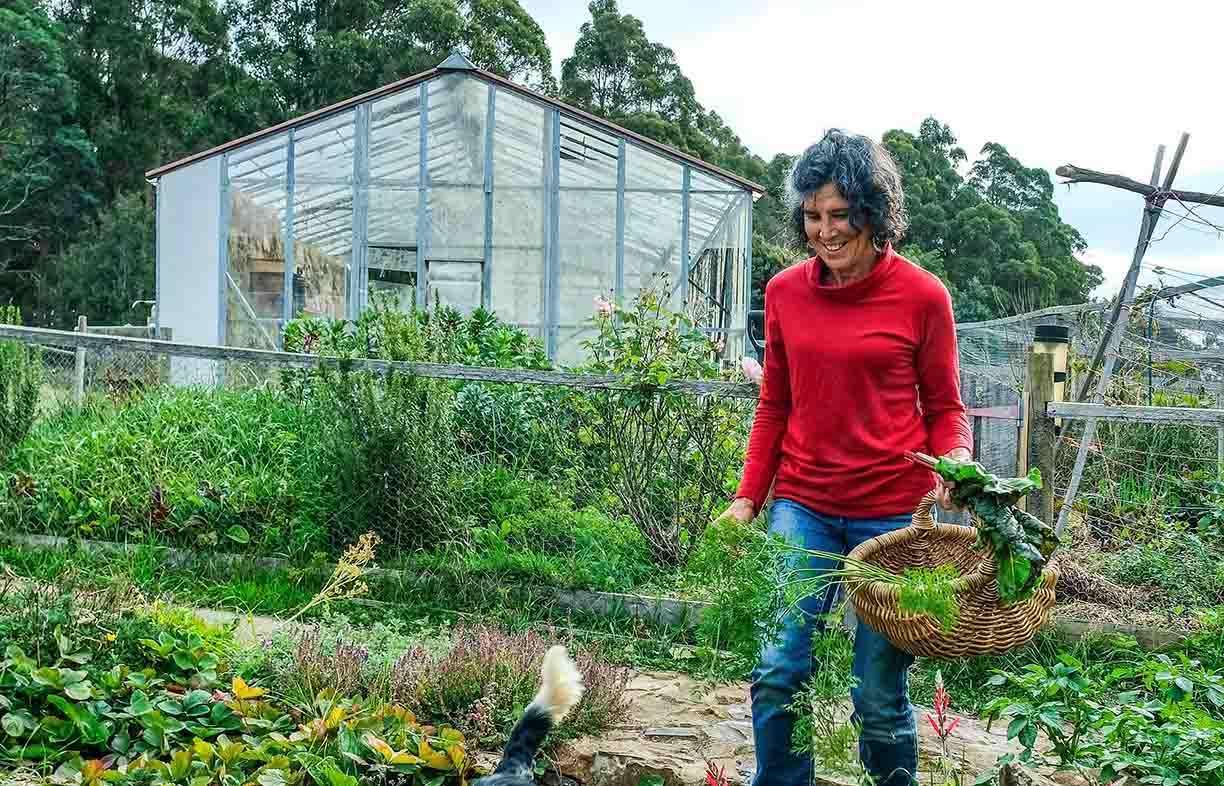 Elizabeth Zuluaga bought her glasshouse second hand. It was reassembled on her property with a stone wall for thermal mass built along the western side. Committed to forging a self-sufficient life, Elizabeth also has a vegie garden and orchard.

Being short on finances or time, or living in a rental property needn’t preclude you from establishing a conservatory. Building a temporary structure using recycled and re-purposed materials is achievable and can be very cost effective.

Horticulturalist Jenny Windahl has been renting in Tasmania’s Molesworth for four years after moving from Victoria with her partner Helen and daughter Morgan.
Last year Jenny decided that she would set about constructing a greenhouse/conservatory.

With a design “in her head” Jenny approached local businesses sourcing wooden pallets. The used wire mesh and electrical conduit to form the roof frame came from Hobart’s Tip Shop. The only new items were 12 star pickets to secure the pallet walls and staples to attach the plastic sheeting to the frame.

Jenny says the entire greenhouse cost under $60! Heading towards the greenhouse’s second Tasmanian winter, Jenny will put a second layer of plastic across the greenhouse to provide further protection. Ventilation comes courtesy of some holes cut in the plastic sheeting.

Jenny has been experimenting with what can be grown inside the little greenhouse and proudly shows off the mango and avocado seedlings she’s grown from scratch. Her little fig tree is laden with fruit, while tomatoes and chillies make the space pop with shots of red.

The best thing about the green-house, says Jenny, is how it extends the growing season and allows plants to keep providing.

In the shed next door are 24 recycled windows waiting to become part of Jenny’s next greenhouse once they find a place of their own. 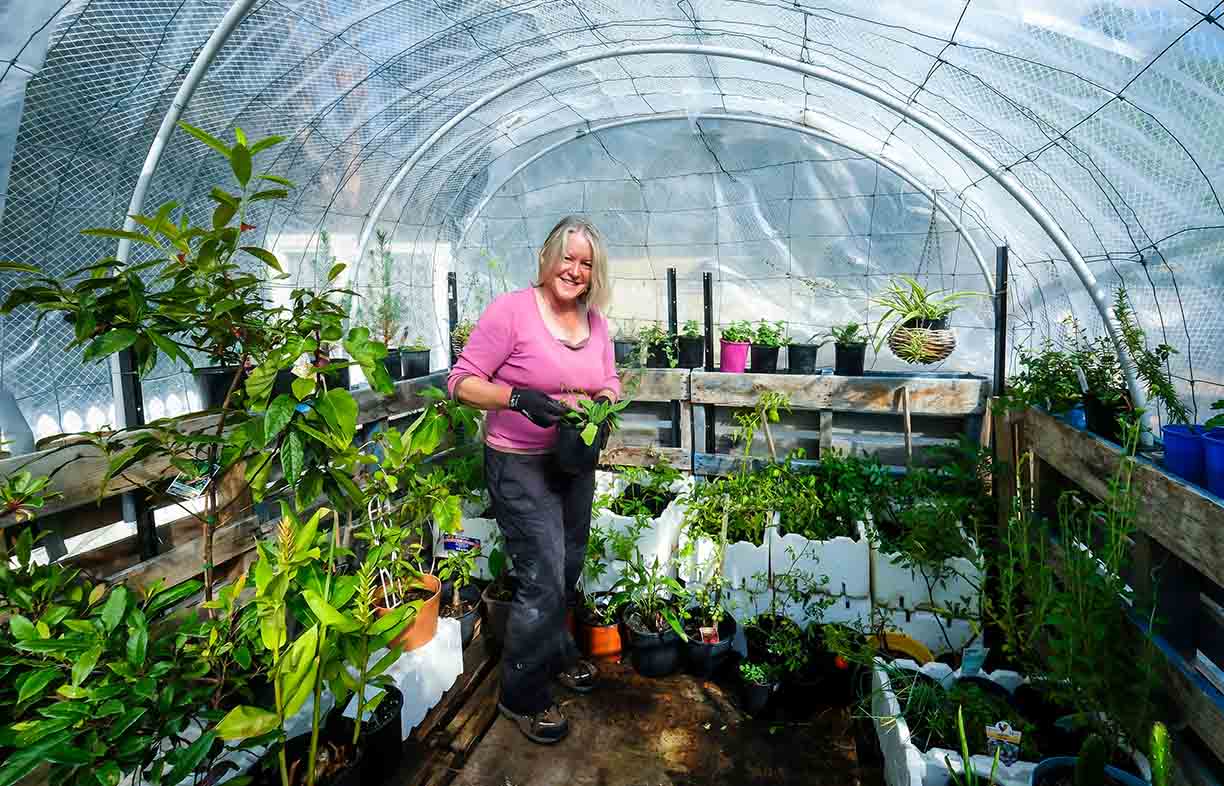