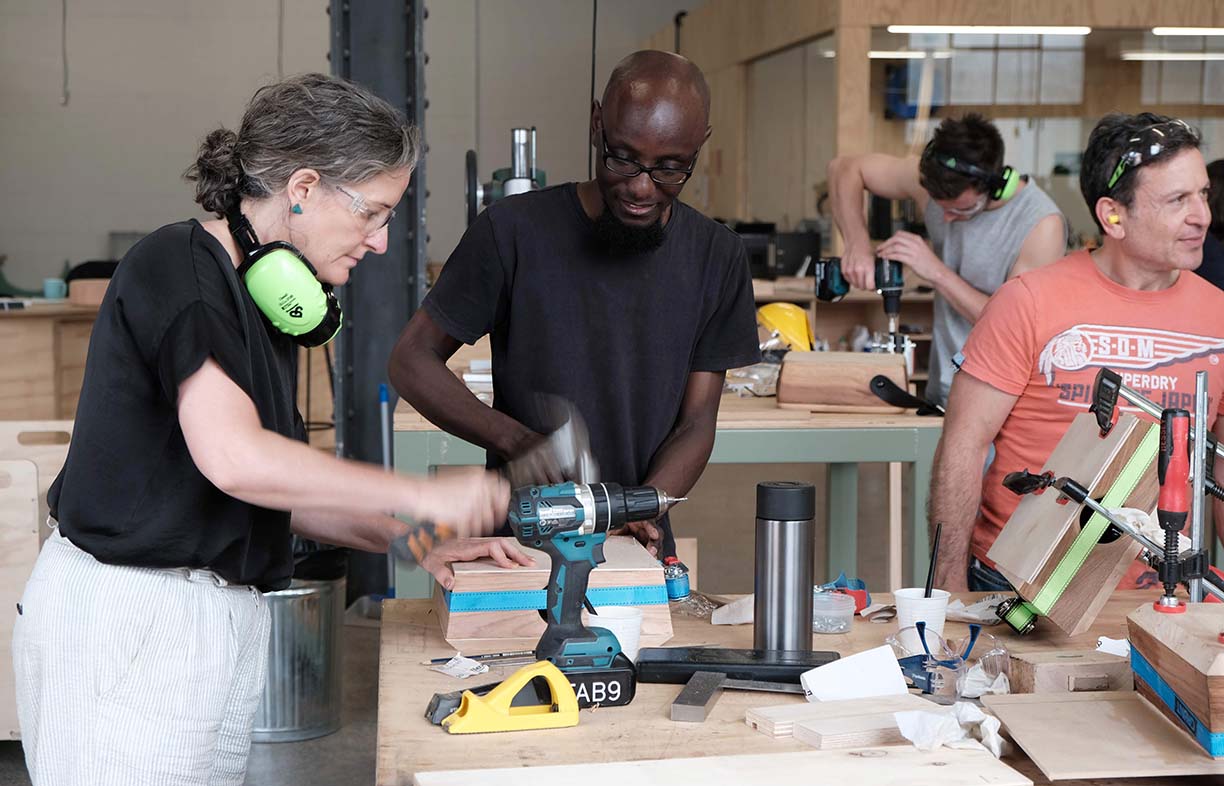 Tawanda Gadzikwa teaching a Fab9 class on how to make your own laptop cajon (a drum) in November this year. Image: Fab9

What do an intriguing boardgame, a series of kids’ science experiments and Australia’s first electric motorbike have in common? Answer: they were all born or nurtured in the five workshops that make up Fab9—the makerspace that’s drawing entrepreneurs, designers and DIY dreamers to the banks of Footscray’s Maribyrnong River.

On any day of the week other than a Monday, this bright 900 m2 workspace may be host to a lively woodworking workshop, a hushed startup meeting or dozens of creative hobbyists putting the finishing touches to a hardwood bookcase, an armchair or an African drum.

It’s a far cry from the steel and chrome towers of Silicon Valley, where the idea for “Australia’s first world-class makerspace” began four years ago.

Consumer electronics manager Hans Chang was working for the flash memory company, SanDisk, when he started using a local makerspace to experiment with the idea of 3D printing thumb-drives, just as Gillette recently did with razor handles. “I spent a lot of weekends tinkering with the possibilities,” says Hans. “But I think I was about five years ahead of my time!”

The glacial development of new ideas at SanDisk wore Hans down and, in 2014, he started looking for other locations that might benefit from his newfound passion for makerspaces.

Although Hans had no connection with Melbourne, other than a short trip here when he was in college, he’d read a lot about auto plants closing down which led him to make a scouting trip to Melbourne in 2015. “Melbourne was an obvious choice,” he says. “I knew there was a lot of great engineering talent here, but also that several car manufacturers were shutting down, and there were going to be a lot of engineers out of work.

“I had a feeling that a big tree was about to fall down—and there would be a lot of nutrients around to help new shoots grow.”

With confidence in his plan, Hans sought an audience with the biggest makerspace advocate of all: Dr Evan Malone, founder of the 1250-member US makerspace chain, NextFab Studio. After a presentation in Philadelphia in early 2015, Dr Malone agreed to become an angel investor in Hans’s Australian venture.

His arrival in Melbourne could not have been better timed. The Victorian government was in the process of setting up LaunchVic, its new startup agency, which immediately saw Fab9 as an ally to help local hardware founders prototype and build new products. Recognising Fab9 as a “project of importance”, the agency funded the makerspace to the tune of $1 million.

The funds enabled Hans to buy or lease a range of equipment usually available only to big manufacturers and research labs, including laser cutters, 3D printers, and a $150,000 Trident CNC router—a high-tech behemoth that can cut, shape or pattern virtually any material to millimetre-fine precision.

These modern machines can help anyone with a good idea and a modicum of handiness to become an instant innovator. Just ask Simon Matthee, a baker from the Macedon Ranges, who’s been using Fab9’s laser cutter to fashion his own version of the bestselling boardgame, Settlers of Catan.

“I’ve recreated a few popular boardgames before, but it’s always involved lots of laborious cutting and carving by hand,” says Simon. “At Fab9, I can bring my designs in on a flash drive and create hundreds of intricate, interlocking pieces on the laser cutter, just using plywood and acrylic. 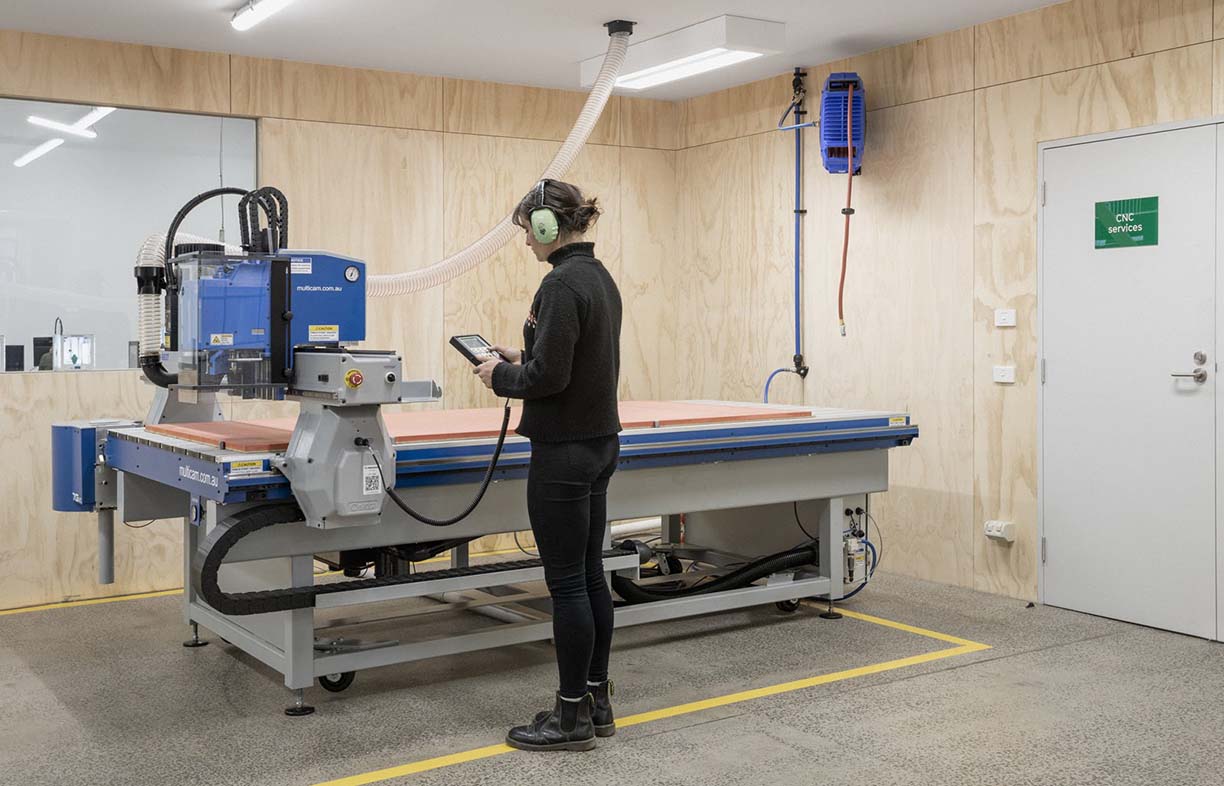 Fab9 houses five customised fabrication labs—for woodworking, routing, electronics, digital fabrication and assembly—which are all equipped with a range of hand and power tools, as well as advanced industrial machines including benchsaws, thicknessers, laser-cutters, 3D printers and industrial sewing machines. Pride of place is a $150,000 Multicam Trident Series 3000 CNC router, pictured here. With a high-powered spindle, tangential and oscillating knives, and all manner of drill bits and cutting tools, this high-spec monster is capable of cutting, shaping and decorating virtually any kind of material, from wood and metal signboards, to aluminium composites, foam packaging, plastics, soft metals, textiles or leather.

“You have access to this amazing equipment, but, more importantly, you also have these technicians who are incredibly skilful and helpful. I can go in there with an idea and, after a five-minute conversation, I know the best way of doing it. It’s like having your own experts on tap!”

Another member is Dennis Savic, a go-getting 27-year-old Ford engineer who’s been making waves in the motoring community this year as the brains behind Australia’s first high-performance electric motorcycle.

Dennis is currently gearing up for commercial production of his three-model C Series, including the head-turning 80 hp Alpha—capable, he says, of accelerating from 0 to 100 km/h in just 3.5 seconds. While this will eventually be a mass-production vehicle, Dennis says that, for now, Fab9 provides the perfect place for testing and fine-tuning his motorbikes.

“As we’re pre-seed, it doesn’t pay for us to lease an entire factory just yet, when we’re basically working nights and weekends,” says Dennis. “At Fab9, we have a semi-permanent space in the metal workshop with our own bench and bike stand, and plenty of space.

“It’s perfect for us because it gives us a spacious workshop, with great equipment, friendly staff and complete security. Plus it’ll cost us less than half of what it would cost to rent a similar standalone factory space.”

For entrepreneurs with major production potential like Dennis, it’s also appealing to have access to Hans Chang and his growing ‘black book’ of startup advisors and investors.

Hans says his eventual goal is to become an “end-to-end hardware incubator”, where entrepreneurs can complete their prototypes and connect with manufacturers, marketers and venture capitalists who specialise in moving projects through the minefield between concept and commercial reality.

To support more founders, Hans has set up a show-n-tell night for seasoned designers and engineers to share their ideas and prototypes, whether they were built at Fab9 or not.

“We’re slowly becoming a watering hole where all sorts of creative animals come together,” says Hans. “We all thrive around each other’s ideas. We respect each other’s IP, of course, but it’s all about sharing—sharing ideas, sharing skills and knowledge, sharing connections in the broader community.”

This sense of community is central to Fab9’s raison d’être. As well as in-house expertise and support for big ideas, Hans and his team provide an environment where even the most modest DIY hobbyist can come and learn new skills.

The growing list of courses and workshops at Fab9 range from beginners classes in carpentry and laser-cutting, to weekend upholstery camps and six-week ‘immersions’ in classic woodworking techniques. Depending on which experts are in town, there are also classes for specialist projects; at present, there are weekly classes on building your own mini synthesizers and djembe drums, and a monthly foray into the many digital possibilities of the Arduino platform. 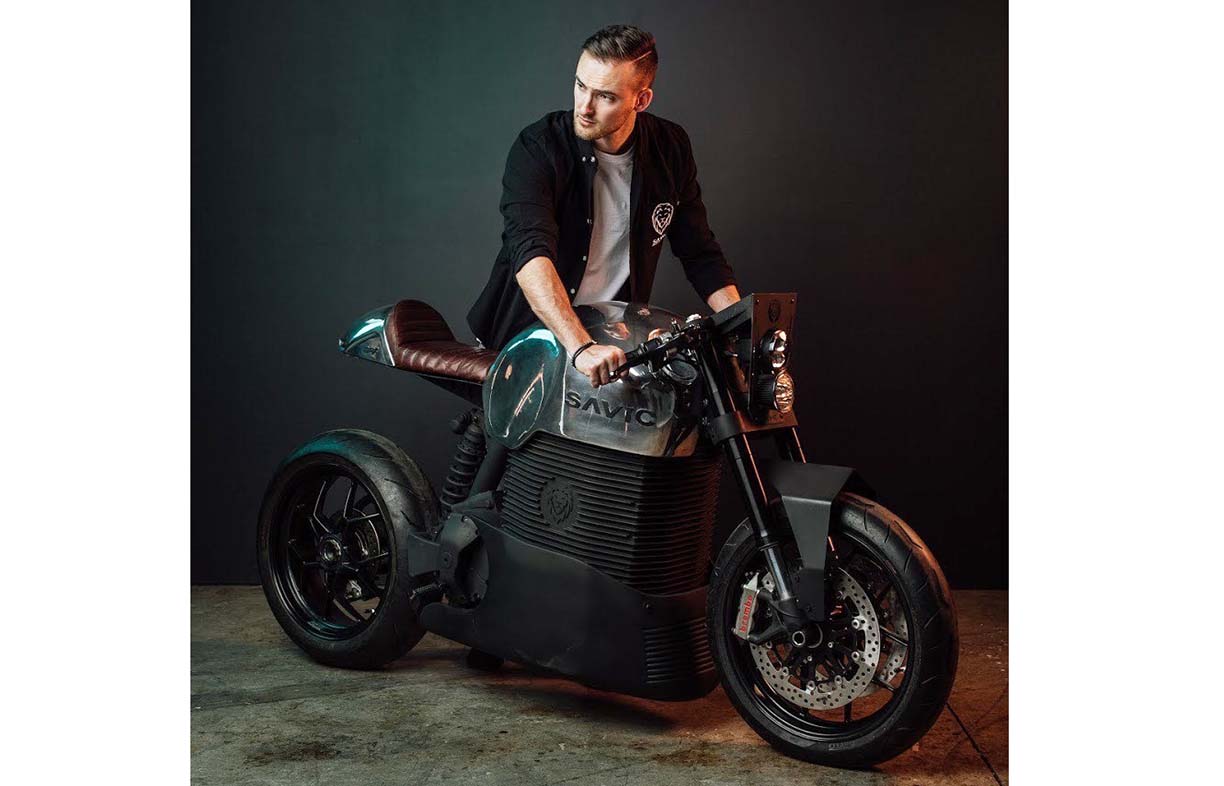 Dennis Savic with his prototype high-performance electric motorcycle, currently being tested and fine-tuned at the Fab9 makerspace. Image: Fab9

Around the world, there’s a growing weight of academic research that points to the benefits of makerspaces as social spaces—places that bring people together to work on projects, share ideas, and return us all to our “making roots.”

“Schools and universities have long known about the benefits of makerspaces for promoting students’ creativity and collaboration,” says Fab9’s operations manager, Michelle Thomas. “But for busy adults, I think they provide even greater benefits, as a place to unwind, learn new skills and create things you never knew you could.”

Michelle Tabet, an urban strategist whose company, Left Bank Co, has been involved in some of Australia’s largest creative infrastructure projects, believes public facilities like Fab9 are critical for inner-city suburbs that are attracting a growing number of “creative workers”.

“Our libraries are being asked to do more and more with constrained resources, which can only really cater for hobbyists,” says Michelle. “More serious inventors and makers need a space for making and access to increasingly complex machinery, which they often can’t afford as individuals.

“Having makerspaces like Fab9 that are accessible to everyone clearly provides a critical creative and wellbeing outlet for the whole community.”

The science of making

Dr Lorien Parker is an award-winning molecular biologist and medical researcher who recently turned her attention to making the magic of science more accessible to Australian children, and she’s using Fab9 to help.

The vehicle for Lorien’s inspiration is SciencePlay Kids, a novel initiative based at the Footscray Community Arts Centre, which offers lessons, teaching kits, experiments, school incursions and community programs, all aimed at making science more engaging for children aged 2 to 12. From messy experiments with fidget-spinners to interactive drawings that light up with conductive ink, these experiments are designed to be safe, engaging and exciting.

“I used to be limited by what I could buy at Bunnings and make in my backyard with a drop-saw,” says Lorien. But with Fab9, she’s been able to explore new possibilities.

“The techies at Fab9 are all really inventive and keen to help,” says Lorien. “We’ll be trying to laser-cut something, and they’ll say ‘why don’t you use the router, or tweak the design like this?’ That’s the beauty of being here.”

Lorien says she got lots of ideas after attending Fab9’s laser-cutting workshop and is looking forward to attending one of its mini-synthesizer workshops. “There are endless possibilities for making science more magical … If you can use science to explore art, sport, literature or even politics, your children’s engagement will grow exponentially. Kids naturally love science—you just have to make it a bit magical for them.”

Makerspaces, and the more electronics-oriented hackerspaces, have been popping up all over the world. Here in Australia you will find them at many local libraries, universities and schools, as well as independent makerspaces in many cities and some towns. Along the same lines as makerspaces are men’s sheds, where guys (and girls) get together to build things, from cars to furniture and everything in between. We have compiled a brief list of separate makerspaces, hackerspaces and men’s sheds, plus some other resources to get you started.

Author:
Ralph Johnstone
Ralph earns his keep as a writer and editor, principally in the public and not-for-profit sectors, and enjoys telling the stories of marginalised people and others who struggle to be heard— including asylum seekers, the elderly and people living with disability.

Ralph has been supporting Fab9 with their public promotions. Fab9 is located at The Dream Factory in Footscray and has membership options from $99/month to $399/month. fab9.com.au 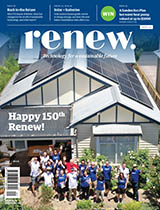