Australia can have an electricity grid entirely run by renewable energy by 2030, according to a new research paper by Renew, formerly the Alternative Technology Association (ATA).

The paper, 100% Renewable Grid by 2030, says the target can be achieved by accelerating the installation of wind and solar power by 80% backed up by pumped hydro energy storage facilities and extra transmission lines.

The paper comes as Australia’s Energy Ministers prepare to debate the merits of the National Energy Guarantee at the upcoming COAG Energy Council meeting in Hobart on Thursday. Renew is urging Ministers to speed up the pace of grid transition to 100% renewable energy.

“Electricity from new-build coal-fired power stations would likely cost between $81 and $182 per megawatt hour. This becomes a range of $102 to $203 once we allow for hidden health impacts and climate impacts,” he said.

“In a fully renewable electricity grid, electricity would cost about $93 per megawatt hour. This includes the cost of building energy storage and extra transmission to manage intermittency.”

Mr Reddaway said the cost of renewable electricity was already in the lower range of the estimates for new-build coal-fired generation, even if coal’s hidden costs were ignored. Renewable energy costs would fall further in the future.

“Australia should prepare a proper plan for 100% renewable energy, and implement it,” he said.

“Decisions should not be left to separate companies driven by short-term profits because this might lead to a poor overall system.”

Renew’s forecasts towards a fully renewable grid in the national electricity market are based on recent research by the Australian National University. The paper considered recent trends and developments in projects such as Snow Hydro 2.0

Renew is a not-for-profit organisation that exists to enable, represent and inspire Australians to live sustainably in their homes and communities. 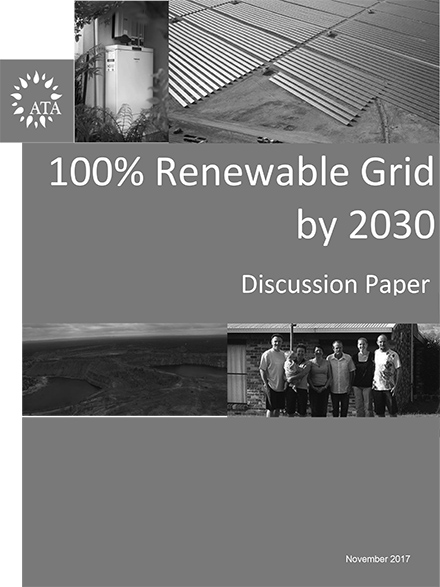