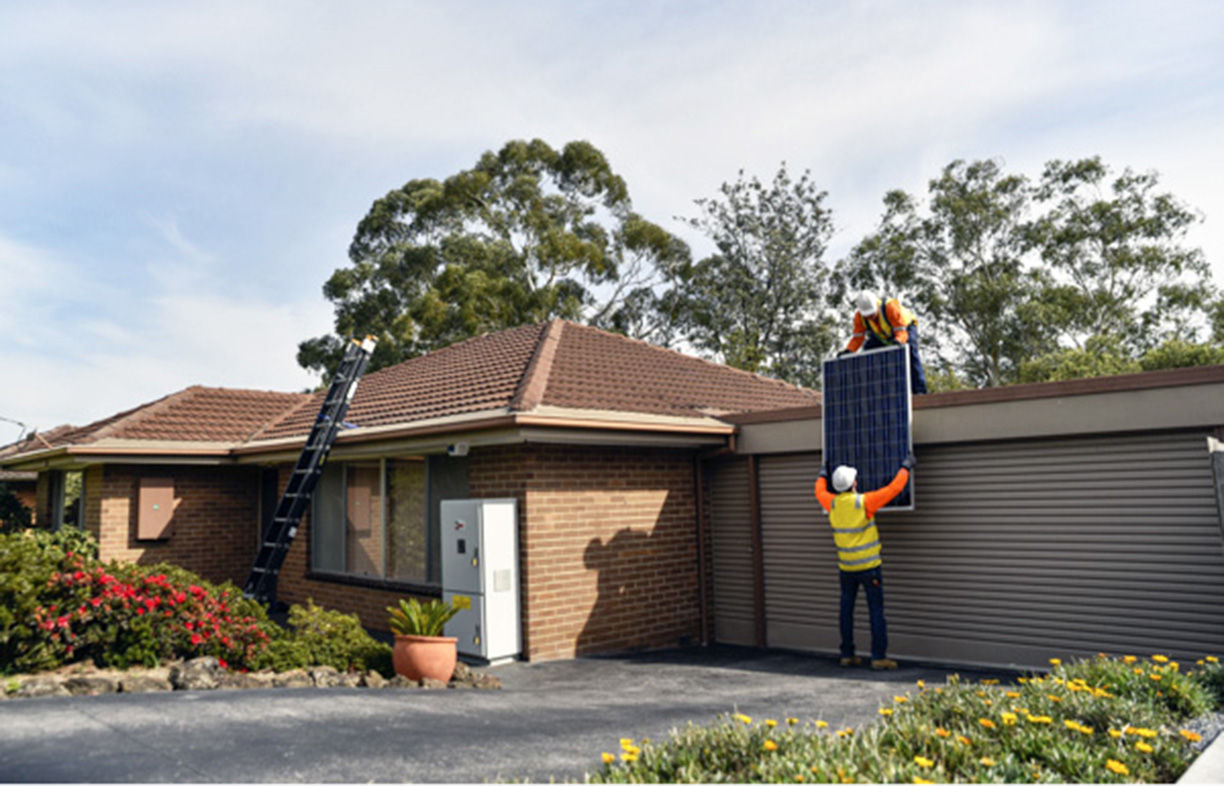 Getting ready for the solar panel installation as part of the mini-grid trial in Mooroolbark. Image AusNet Services.

In an Australian first, network provider AusNet Services is rolling out a solar + storage mini-grid trial in Mooroolbark, in Melbourne’s east.

Of the 16 homes on the chosen street, 14 will each have between 3 and 4.5 kW of solar panels and a 10 kWh battery storage system installed, with a cloud-based monitoring and management platform to optimise power flows across the mini-grid and to provide demand management support to the network.

The two-year trial was announced in April and was made possible with funding from the Demand Management Innovation Allowance. Participants don’t pay for the equipment and, at the end of the trial, get to keep their panels and inverter (but the control system and battery storage go back to AusNet Services).

As at end August, all houses have solar panels, inverter and battery storage installed, enabling data gathering on energy generation and usage patterns. The control system should be in by end October, which is when testing can begin in earnest. Testing will include deciding when to charge and discharge the batteries, and at what rate, based on current and forecast customer usage and PV generation as well as the network requirements. A single objective (e.g. minimising the overall peak demand on the mini-grid) can be implemented in a number of ways, so they will be developing and testing different approaches. The stabilising device and switching equipment that enable the mini-grid to be islanded (isolated from the rest of the network) will be installed towards the end of this year.

The group of houses will operate as a mini-grid from a control and electrical point of view, but the metering and billing arrangements are unchanged. To enable financial offsetting of one participant’s generation against another’s usage would require different meters to be installed—with a parent meter for the mini-grid and sub-meters for each house—so instead they will be modelling the potential financial effects.

Two households were unable to participate in the trial; however, this will provide fortuitous real-world data for where there is less than 100% opt-in—testing how the mini-grid can serve the energy needs of these houses without having their energy contribution in the mix. AusNet Services’ Distributed Energy and Innovation Manager Justin Harding explains, “Those houses will simply appear as extra loads in the mini-grid. For example, if we are trying to reduce the net demand of the mini-grid to zero at the connection point to the main grid, all houses would need to export a small amount of energy to offset the non-participants’ load.”

Simone and Joel Beatty make up one of the households participating in the trial. When they purchased their home five years ago, Simone says they noticed that a lot of the new houses being built were having solar installed, and it was something they were interested in, but hadn’t been able to afford. So when AusNet Services came knocking on their door with news of the trial, Simone says they were “definitely excited.” As well as looking forward to seeing how it all works, and the impact on their electricity bills, Simone says they have also benefitted from the information provided by AusNet Services—how they can log in to a web portal to monitor their electricity usage and ways in which they can be more energy efficient. She says they have “definitely already altered some behaviours.” And not only has there been an educational side effect of having the technology installed, it has given the neighbourhood something in common to talk about and get excited about. Simone says “everyone seems very positive about it” and adds that friends and family are jealous!

This trial follows a three-year battery storage trial by AusNet Services that tested how residential batteries can reduce customer’s maximum demand for electricity and support the network. Justin Harding says that there will likely be an “evolution of trials” into the future. This Mooroolbark trial has a strong customer learning and technical focus; the next step could be a larger project with more of a commercial focus, looking at how best to structure finances and customer agreements.

Aims/benefits of the trial:

Best of both? Community battery trial in WA

A cutting-edge residential battery trial underway in the new Perth suburb of Alkimos allows residents to generate solar electricity and benefit from access to a ‘virtual storage’ battery system.

It has a number of aims: to reduce energy bills for participating households and improve network efficiencies by ultimately reducing connection costs. However, the most interesting and important aspect of the trial is Synergy’s ‘time of use’ billing product called the Peak Demand Saver plan.

The plan works by offering a three-part tariff for network energy, with different energy charges for peak daily (4pm to 8pm), off-peak day (midnight to 4pm) and off-peak evening (8pm to midnight). The time-of-use energy tariffs are designed to encourage households to minimise consumption and maximise returns on their solar PV investment—but without the need to invest in their own battery storage.

This new-style product means Alkimos residents pay a fee each month to have access to the community-scale battery storage. Those who store solar credits during the day draw on them first during the peak daily period, and then for the evening off-peak without incurring any additional costs, in much the same way they would their own battery. During the day households use their own solar energy.

“It’s everybody’s battery to use. Customers pay $11 per month to use it, and then we calculate their usage over a 60-day billing period,” said Synergy.

“Anything they put into the batteries is theirs to draw on at peak times at no additional charge. And whatever they have left in the battery after the 60-day billing cycle is purchased from them at a 7 cents per kWh [feed-in tariff] rate. Because it is ‘virtual’ storage you can pretend it is your own battery, it’s just your neighbours are pretending it’s their battery too.”

So far, 65 residents have opted to participate in the trial since it began in April 2016 with the aim that 100 households will take part over the four-year trial period. Before residents join the trial, Synergy analyses their historical consumption to ensure the tariff suits their usage patterns.

“However, we’ve already had customers who want to participate even though they are not necessarily going to be better off, because they want to be part of the first shared battery trial in Australia,” said Synergy.

The trial will cost around $6.7 million and is backed with a $3.3 million Australian Renewable Energy Agency grant, and when launching the trial ARENA CEO Ivor Frischknecht said community-scale battery storage held great promise. “A new [housing] development like this might actually need less of a connection, or a smaller connection [to the electricity network]. That means lower costs for those people that are buying new lots and less investment into poles, wires and transformers,” he said. 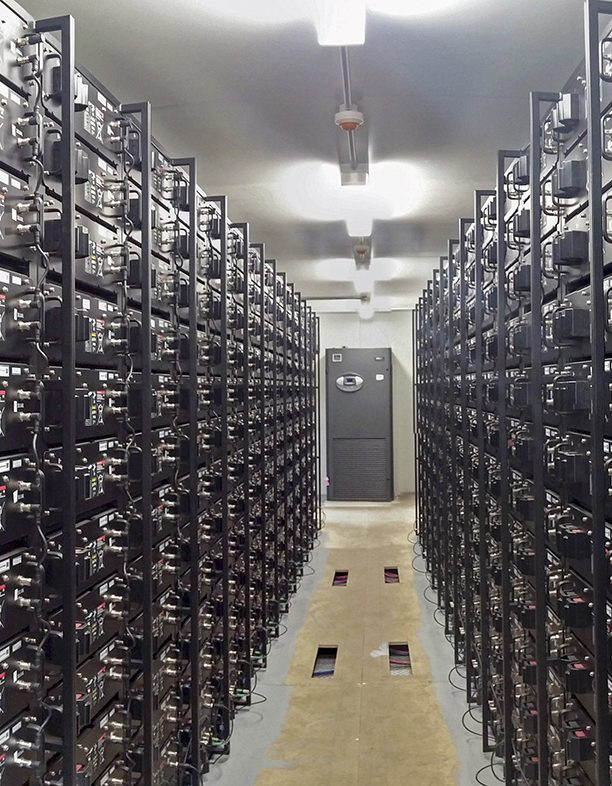 This article was first published in issue 137 (Oct-Dec 2016) of Renew magazine. Issue 137 is an off-grid and hybrid special. 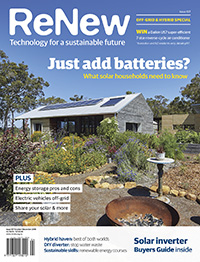