PV recycling – Where do all the panels go? 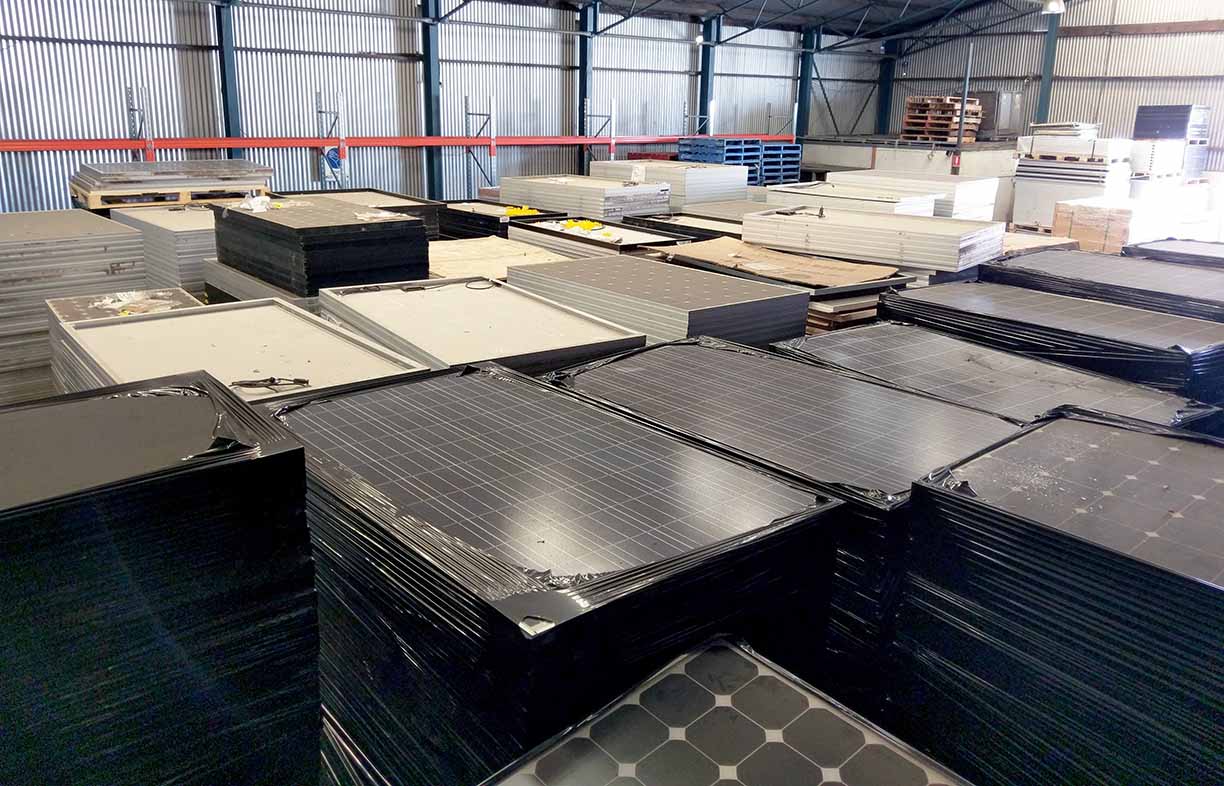 The solar revolution has brought many environmental and, increasingly, economic benefits. But each photovoltaic panel is also a future item of waste. So what do you do when a panel comes to the end of its useful life? Moreover, what do you do with billions of them? Eva Matthews investigates.

Assuming that today’s panels are typically 270 W to 300 W, this equates to a current global total of at least 1.1 billion panels—and given the early panels were just 60 W, this number is likely to be higher in reality. That’s a mind-boggling figure! And it’s only going to get bigger, with global installed capacity projected to reach 4500 GW by 2050.

At some point (let’s assume 25 years, the standard warranty period), all of these panels will come to the end of their useful lives … and then what? Given a standard panel weight of 18 kg, that’s roughly 20 million tonnes of potential waste to manage.

Panels may also be retired before the 25 years is up. Leaps in technology may lead to systems being upgraded early and a significant number of panels (roughly 10%) fail early due to damage during manufacture, transport or handling.

Unless properly managed, all this potential waste becomes a monumental problem. To date, unusable solar panels have often ended up in landfill, along with many thousands of tonnes of electronic waste (e-waste) despite programs to divert the waste for recycling.

PV panels contain small amounts of hazardous substances. These will only leach out if the panels are broken up—unfortunately, this is pretty much guaranteed to happen when they are deposited in landfill. In small amounts, the toxicity may be negligible, but when you’re talking millions of tonnes of panels, the danger of contamination is a significant concern. Silver, tin and lead (particularly in older panels) are the hazardous components of mono- and polycrystalline silicon panels (estimated at 50% to 60% of the market); indium, gallium, selenium, cadmium, tellurium and also lead are found in thin-film panels. 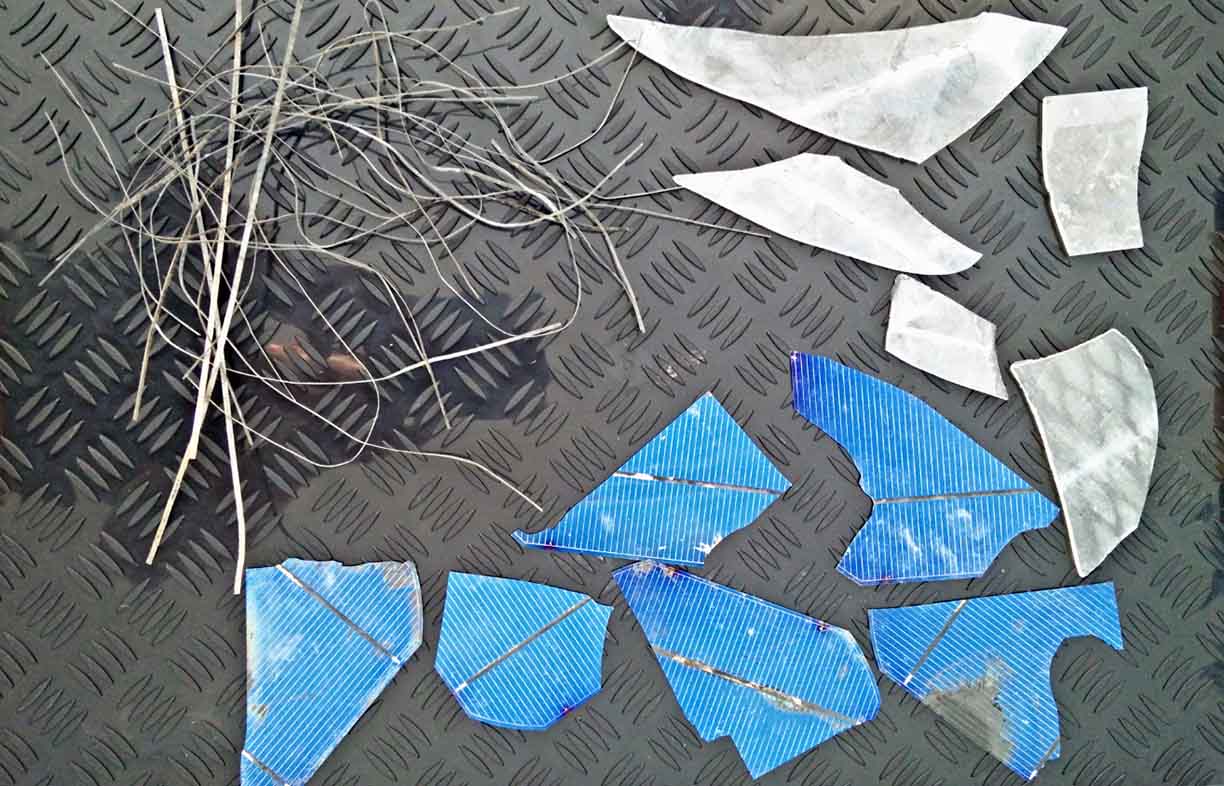 Currently 85% to 95% of a panel can be reclaimed and recycled. Some damaged or early-fail panels can be repaired and resold on the secondhand market or to developing countries at reduced prices, allowing access to solar technology to those who might otherwise not be able to afford it. Glass, copper, lead, aluminium and the hazardous semiconductor materials can be reclaimed through a mix of mechanical and chemical processes that have relatively low environmental impact, and either melted down for recycling or sold on as raw materials to be used in the creation of new solar panels and other electronics, reducing the embodied energy going into their manufacture.

Not only does the reclaiming/recycling approach make environmental sense, it’s worth big money. The most recent reports place the value of the global yield of recovered raw materials from solar panels at US$450 m by 2030, and in excess of US$15 b by 2050.

Thankfully, as a result, a PV recycling industry has emerged internationally—see the box on PV Recycling Worldwide.

But what’s happening in Australia? As part of its National Waste Policy, the federal government enacted the Product Stewardship Act 2011, designed to reduce the amount of hazardous waste going to landfill as well as increase recycling and recovery of valuable materials. The National Television and Computer Recycling Scheme (NTCRS) was launched in 2011, aiming to increase the recycling rate of TVs and computers to 80% by 2021–22. It’s been a successful approach, with the NTCRS exceeding its target for 2014–15 by 5%.

Each year, as a requirement of the act, the Minister for the Environment publishes a list of additional product classes to be considered. For 2016–17, the product list included a class that covered PV cells, inverter equipment and system accessories such as batteries, for domestic, commercial and industrial applications, in recognition that “the volume of photovoltaic system equipment reaching end-of-life is expected to sharply increase in coming years to become Australia’s largest electronic waste growth stream.” A review of the Act, including consideration of the 2016–17 product list, commenced in March last year and is due for completion in the first half of 2018.

Currently 85% to 95% of a panel can be reclaimed and recycled.

At a state level, South Australia was the first government to ban e-waste from landfill in 2012, alongside investment to boost recycling infrastructure. Their definitions of e-waste are designed to support the NTCRS, however, so PV components are exempted from the ban to date; this may change if the federal act is updated to include them.

In 2014, the Victorian government followed suit, committing to a ban on e-waste going to landfill, with regulatory measures to be in place by June 2019. At this stage, the draft definition of e-waste is “any end-of-life equipment which is dependent on electric currents or electromagnetic fields in order to work properly”. By this definition, it would seem Victorians will similarly be waiting for PV-specific bans. Other states have not yet announced any plans to ban e-waste, including PV, from their landfills.

Action on the ground

While we wait for government legislation, there are, however, options consumers can pursue right now.

The first is for panels that haven’t yet reached their end-of-life—for example, if you’re updating to a newer system. For this, there is the reuse option provided by a small secondhand market, e.g. selling your panels via eBay or Gumtree. Often, older panels will not be accredited for installation in a new on-grid system, but can be used in off-grid systems; one market is for off-grid systems used by those with recreational vehicles.

The second option, recycling, is on a much larger scale.

Upgrades during 2017 to Nyrstar’s smelter and refinery in Port Pirie, South Australia, will mean an expansion of the range of e-waste it can process, reported to include PV cells (www.premier.sa.gov.au/index.php/ian-hunters-news-releases/7288-biggest-e-waste-recycling-plant-in-australia-destined-for-port-pirie).

While we wait for government legislation, there are, however, options consumers can pursue right now.

Their approach means they can reclaim up to 95% of materials, with an aim to reach 100% recyclability. They have spent years doing R&D—with Flinders University and the University of New South Wales, as well as their own investigations—to work out how best to extract usable cells for reuse, as well as the component materials (even potentially down to the level of carbon materials, and using processes that are low-impact environmentally) that can be sold into the local supply chain for recycling into other panels or products. As Reclaim co-director Clive Fleming explains: “This is a better value-add, for us and for manufacturers as well as the environment, than melting down for other uses or exporting overseas.” Reclaim is also researching recovery processes for thin-film PV panels and, a little down the track, will be looking at inverters and the various types of batteries used in solar set-ups.

Reclaim has been working with manufacturers (six of the current 10 tier-one suppliers) to recycle panels damaged in manufacture or from failed warranty/insurance claims. For a set fee that is much lower than what it would cost the manufacturer to deal with this problem themselves, given warehousing and tipping fees, Reclaim arranges pickup of the panels they will recycle, either from the manufacturers’ premises or from the installers who have decommissioned them and recycles them using a small purpose-built facility (currently in Victoria and soon expanding to a larger facility in SA).

The exciting news is that Reclaim is committed to expanding to include a recovery service for all end-of-life panels which can be accessed by installers and consumers directly, even for older panels from manufacturers no longer in Australia; a fee, yet to be set, will be charged for this. Due to launch early in 2018, an online portal has been developed (keep an eye on www.reclaimpv.com.au for details), where consumers and installers can find their nearest drop-off centre or, if it’s too far for them to access, arrange for pick-up. At least one collection centre is planned per major Australian city. They expect this network will expand as demand increases: “It’s going to explode, we reckon, but we’ll just have to wait and see. Our system is modular, so relatively easy to scale up, and then it’s a matter of setting up more infrastructure—collection points, processing sites, etc.”

Once this new set-up is launched, Clive anticipates more manufacturers will come on board: “They have been calling us, but we’ve been holding them off until we get this infrastructure set up.” Additionally, Reclaim is establishing a new membership structure which will enable a more coordinated network (such as has been developed by PV Cycle in Europe) and will be open to installers as well as manufacturers, developers and utilities representing streams other than rooftop solar (e.g. remote facilities, solar farms, construction sites).

Reclaim has also been an active advocate for PV recycling, lobbying state governments to enact legislation prohibiting the dumping of PV waste in landfills and, at a federal level, to have product stewardship for PV that would effectively mandate recovery and recycling of this waste. “We would like legislation in place to support what we do, although it’s not necessary to what we are doing.”

PV recycling is a real win–win: manufacturers get an easy disposal service for their unusable panels and a point of difference in the market (‘we recycle’); installers save the time and fees it would cost them taking decommissioned panels to landfill; hazardous substances are contained and handled safely; the carbon footprint is reduced as cells and components are reused rather than manufactured from scratch; and, cumulatively, millions of tonnes of potential waste is diverted from landfill. We look forward to reporting on further progress, both in policy and infrastructure, next year. 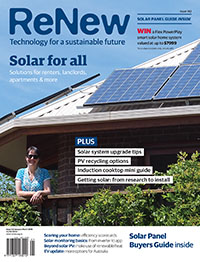