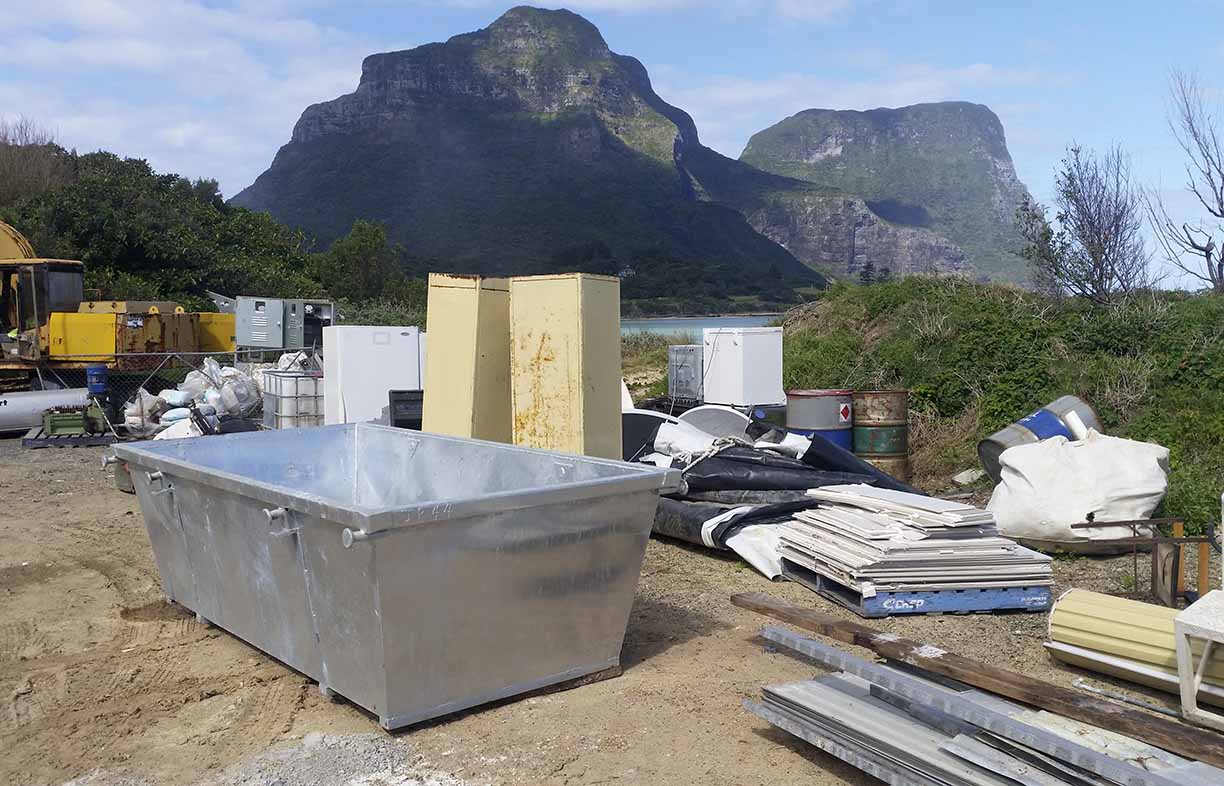 Meticulous sorting and compacting reduces the volume of waste that needs to be shipped back to the mainland. A life cycle assessment of everything brought onto the island happens “almost unconsciously” and reduces unnecessary waste.

Don Batson and Sophie Liu’s dream holiday on Lord Howe Island included a tour of the waste management facility—that’s a Renew kind of holiday! They describe the amazing work done to reduce waste on this pristine island.

When you live on a crescent-shaped island 11 km long and only 2 km across at its widest, you need to be mindful about limited resources—and as we found out, that can lead to innovative sustainable solutions for all sorts of things, including how you think about and manage waste.

Recently we were lucky enough to have a holiday on Lord Howe Island, a tiny speck in the Pacific, 600 km east of Port Macquarie, with a population of 360 plus a maximum of 400 tourists at one time. It’s an island with UNESCO world heritage status and we were drawn there to experience this pristine environment with its unique plants and animals. The last thing we expected to be excited about was the waste management setup! Yet somehow, on our third day there, we found ourselves having a three-hour tour with John, the manager of the island’s waste management facility.

From speaking with locals, we got the sense that a life cycle assessment of everything brought onto the island happened almost unconsciously, by necessity. The high cost of bringing in a product and shipping out any waste requires a less ‘disposable’ approach to purchasing. For example, to bring a new car onto the island, you must first arrange to have the old car removed.

The island also has a wonderful food cooperative— a great community and social enterprise. It offers bulk foods for sale in recycled and reusable containers, so there’s less packaging to be disposed of. This was ‘zero-waste’ heaven, with all sorts of nuts, dried fruit, grains, flours, cereals and even spices sold in bulk. They also had dairy items bought in bulk then portioned up for sale, homemade dips and locally made cakes and biscuits. We were in awe of the simple, effective system set up so customers can return empty jars and containers, which are then washed and reused. As visitors, we were actively encouraged to participate.

Recycling for tourists too

Our curiosity about the recycling systems began at our accommodation. The kitchen had three bins: one for non-recyclable rubbish, one for recyclables such as glass, cardboard and plastics, and a small bin for food waste (with pictures noting that meat scraps and fish bones could be added). Intrigued, we asked one of the staff there about the food waste: did they compost all this on site? Melissa explained that it went off for processing at the waste management facility on the island. And, she added, if we were interested we could get in touch with the manager, John, and perhaps arrange to see it.

The next day, planning our week’s activities at the information centre, we asked the helpful Bronwyn on the desk whether we could find out more about the island’s waste processing. “Of course!” was the answer, “John is my husband, here’s our home number, call tonight to arrange a tour!”—a perfect example of the friendly, hospitable nature of everyone we met on the island. 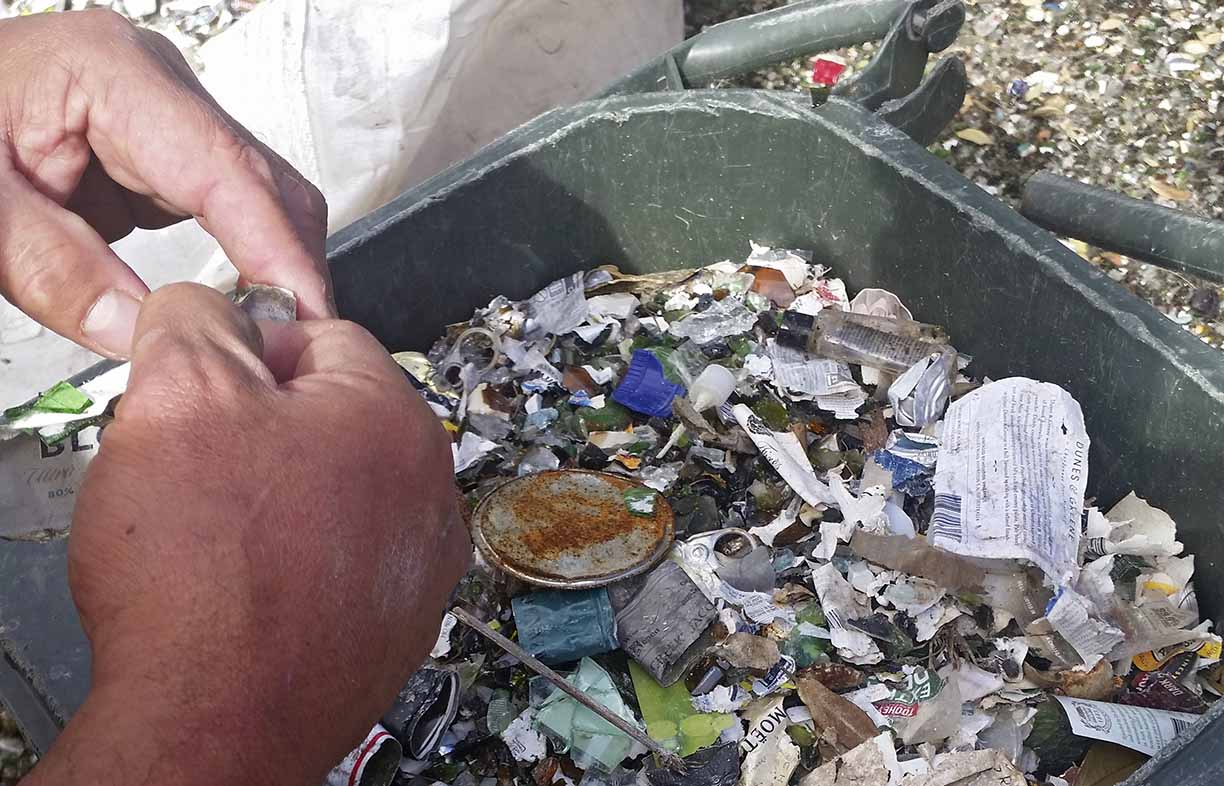 On our tour, the first thing John told us about is the pre-sorting that everyone gets involved in. Rubbish needs to be pre-sorted by the ‘disposer’; if it isn’t, you incur a higher charge. In this way, cost helps encourage desirable behaviour! Waste from the island’s tourist accommodation is sorted and checked by staff in case the guests don’t divide recyclables from landfill waste correctly.

The waste is pre-sorted into compostable, recyclable, reusable, incinerable and general streams. The four or so staff at the facility then further sort and process the waste to reduce the volume that needs to be shipped back to the mainland. All food waste, cardboard and incinerable items are processed and kept on the island. Everything else gets sent back to the mainland for recycling or landfill. Recyclables are stockpiled until enough of one type is collected to fill a boat-friendly bin, saving space and costs for shipping.

From paper waste to compost

Cardboard and paper are shredded (using a machine acquired just this year) and used in food waste processing. They first need to manually remove plastic tapes from any boxes. Wax boxes have a separate recycling stream as they can’t go through the shredder and composter—the wax clumps up and reduces the air flow. Glossy magazines are also recycled separately as they attract a rebate on the mainland.

They stockpile the large volume of shredded paper and cardboard and add it to the food waste for composting. The composter is a vertical unit with three chambers.

John outlines the recipe for the compost: 120 L of food waste and 80 L of cardboard. They previously also added gypsum or lime but found it wasn’t needed. With mixing and aeration the chambers can reach temperatures of up to 80 °C ! They use a macerator to pulverise large bones and fish before they go through the composter.

The resulting compost gets mixed with more shredded cardboard and added to the green waste. It’s then watered and the mix turned over. The processed compost waste that results is used to fill depressions or as mulch in areas outside the sensitive environs of the park preserve (which makes up 70% of the island).

As the composting machine is 16 years old, the island has funding for a new unit. There are hopes it will compost hot enough to decompose nappies, so they’ll no longer need to ship them off the island. As an added advantage, it will use less energy than the current composter. 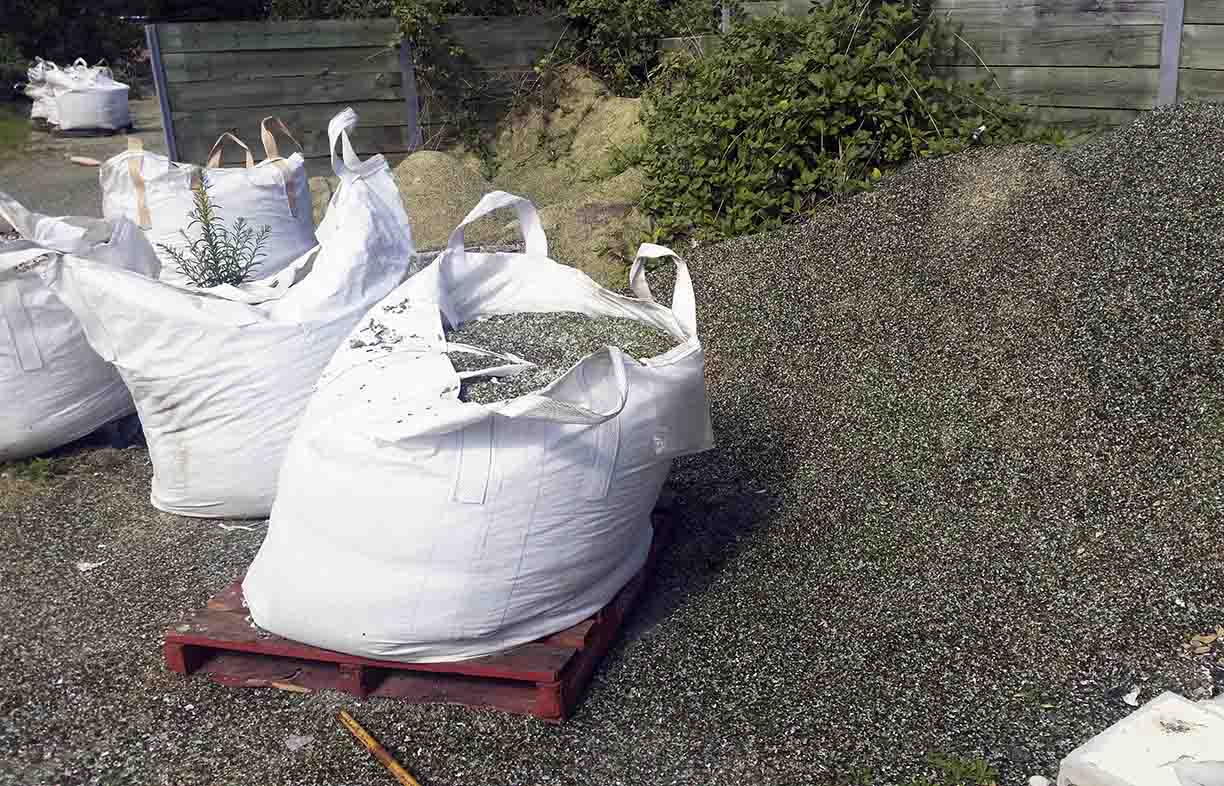 Further sorting means they can get the best value for the recyclables. Metals can attract a rebate, so they manually separate out the steel and aluminium. They also sort out the light globes, printer cartridges, batteries and plastic containers and when there is enough volume of any of these, they are baled for shipping. They strip the labels and lids off glass bottles and jars and then crush them into three grades of finer and finer particles for recycling on the mainland. Cooking oil is also sent back for recycling, and engine oil as well—it’s picked up by a company for reuse on the mainland, though they still have to pay to ship it.

Any good reusable items such as clothes or books are donated to the Red Cross (there’s free shipping for these charity items). They also separate out some items to be sold in the ‘tip recycle shop’. Bikes with serviceable parts are taken by a group on the mainland who turn them into wheelchairs and donate them to developing countries such as Sri Lanka. 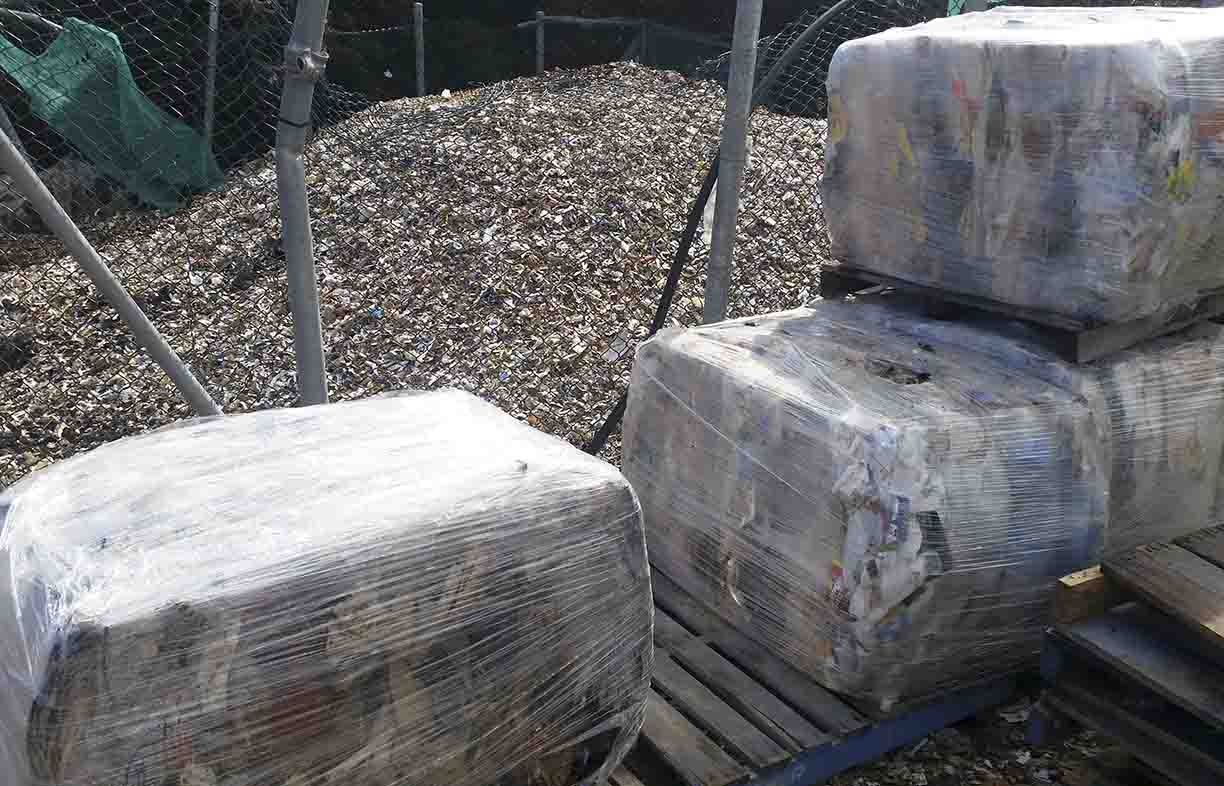 Compacted landfill waste wrapped in plastic, with stockpiled shredded cardboard in the background.

Everything else that is left as landfill waste is put in the compactor to make large blocks, which are wrapped in plastic and left in the sun to kill any flies and maggots before they are transported back to the mainland. The compactor is also used to crush the plastic recyclables into bales; plastic bags are also baled up and compressed.

Everything is meticulously sorted and packed to reduce volume. Large pieces or odd-shaped building waste are used as lids on the skip bins of materials. For example, we saw a bin of whitegoods which had been crushed or taken apart to better use space and then lidded with a flattened old water tank.

Aluminium window frames are salvaged from building waste and the window glass broken down. Steel cans from household waste are crushed into bales and added to a skip bin where steel from building demolition, such as roof gutters, can be mixed in too. Ovens, barbecues and old heaters are squashed down so their metal can be recycled. Larger items are dismantled and their components put into the correct waste stream. For example, when they pull apart a couch, the untreated timber goes to the bonfire, the metal springs go to recycling and the foam is compressed and added to landfill waste. E-waste is collected until there is enough for a pallet.

Untreated timber makes up the majority of the incinerable waste stream. It is stockpiled over a year and what hasn’t been recovered and reused is then burnt in a bonfire, to save the expense of shipping it off the island.

For some items there is not enough volume for recycling to be economically viable, such as polystyrene and tetrapaks. The scale is too small to warrant a special compactor for the polystyrene, so unfortunately this ends up in the landfill stream.

The majority of the island’s waste water is handled via regulated septic systems, and when these and grease traps are pumped out, the facility has holding tanks and filtration systems to handle the output. These include settling tanks, aeration tanks, evaporation beds, sand filters and reed beds. The evaporation beds have clear lids to enable the sub-tropical sun to speed up evaporation and also expose the contents to natural UV treatment. The final step in the treatment process for waste water is the reed beds; for the solids, they pass through the composter.

Three times a year, audits are conducted over a two-week period to calculate the amount and types of waste being disposed of, and set the rates for waste disposal for domestic and commercial users. The rates include a flat fee, but the majority of charges are volume-based. Some locals told us that they’d saved money and reduced trips to the centre by giving their food scraps to a neighbour with chickens—and they were receiving eggs in exchange for their contribution!

The more readily recyclable your waste is, the cheaper it is to dispose of. While clean rubble is taken for free (as it can be used for roadworks to fill in any gaps or holes), a mix of metal and wood with building rubble will mean more handling by the facility staff and therefore a larger fee. In another example, John mentions that one of the tourist accommodation facilities has their own glass crusher for bottles so they can reduce their volume and hence cost. In such a small community there is also the opportunity to educate hospitality staff to sort the waste and remove bottle lids first to improve the ease of recycling. They can even tell when new staff or a new chef starts at a restaurant, as the format and volume of the rubbish changes. It doesn’t take long though and everyone is humming to the same waste management tune.

It’s a pity that we on the Australian mainland aren’t also in tune with this successful waste management approach. We could learn a lot from this little island and its approach to reducing waste and improving recycling (with a landfill diversion rate of over 80% compared to 62% for NSW in 2012/13). It may be a necessity on such a small island with high shipping costs, but it’s also something that the islanders are clearly proud of and happy to be involved in.

It could even be a case study for the rest of the population: Earth is an island too, and it’s all we’ve got! 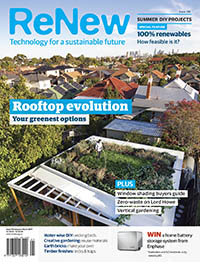