Switching from gas to electricity for heating, hot water and cooking can favour your hip pocket. But what about emissions?

Knowing whether electric or gas appliances are more or less emissions intensive for households is complex. In the past, ‘natural’ gas was considered the go-to option for cooking, water heating and space heating from both a cost and an environmental perspective. But with modern, higher efficiency electric appliances such as reverse-cycle air conditioners, heat pump hot water systems and induction cooktops, and with greater penetration of renewable energy in our electricity grid, what is the lowest emission fuel source for households today?

Currently, there is limited information for consumers on how to reduce their carbon footprint from household appliances. In response, Renew has undertaken an in-depth analysis comparing emissions from space heating, hot water and cooking when powered by gas or electricity. The results of this new study further strengthen the case for home appliance electrification, following on from previous work by Renew looking at the economics of gas versus electricity.

From economics to emissions

In 2018, Renew undertook a detailed analysis of the economics of household gas versus electricity use (www.bit.ly/EvsG_report), which demonstrated that in many cases households would be much better off financially with a switch to efficient electric appliances when replacing old appliances at the end of their life, or when building new.

This new analysis extends that economic study to consider emissions. It applies the relevant emission factors for gas and electricity in each state to the appliance energy loads developed in the economic study.

Modelling emissions in the Australian energy market is a challenging task. The electricity mix in the national electricity market (NEM) can change at any given time based on demand. Similarly, the natural gas network is interconnected and includes both traditional gas fields and coal seam gas (CSG) extractors.

To establish an estimate, a state-based greenhouse gas (GHG) emissions rate was determined using the National Greenhouse Gas Accounts Factors as at July 2018; this is the national reporting device for emissions rates across the economy.

This figure was then applied to modelled annual energy consumption for heating, hot water and cooking appliances in 16 different locations in the NEM. The energy consumption data came from Renew’s previous study on the economics of gas versus electricity for appliance replacement scenarios.

Table 1 shows the appliance types modelled for different household types. Appliances were selected to provide the same level of heating, hot water and cooking performance, whether from gas or electricity.

For example, a small household using gas for heating was modelled as using a wall furnace and one portable unit, except in Victoria and the ACT where a ducted 50 MJ unit was used (as ducted gas heating is more common in these places). The same household type using electricity for heating was modelled as using two reverse-cycle air conditioners, a 7 kW and a 3 kW unit.

In line with the economic report, space heating was not modelled for Brisbane due to the low need for mechanical heating and the low take-up of gas heaters.

Table 1. Appliance types modelled for each of the household types.

Attempting a study such as this comes with challenges, such as finding a balance between the need to maintain accuracy and the sheer complexity of modelling emissions on our energy network. Unfortunately, this meant that assumptions and averaging that occur in official reporting of emissions had to be carried over to our modelling.

For example, there is a considerable question mark over the accuracy of Australia’s officially reported GHG emissions from the gas industry. Indeed, finding a generally accepted accurate rate of emissions for gas extraction, transport and usage was one of the main challenges in this study.

For simplicity, this study does not attempt to calculate the GHG emissions of the household’s entire energy usage. Because it focuses on the relative emissions of specific appliances, we looked only at the energy usage of the appliances in question. 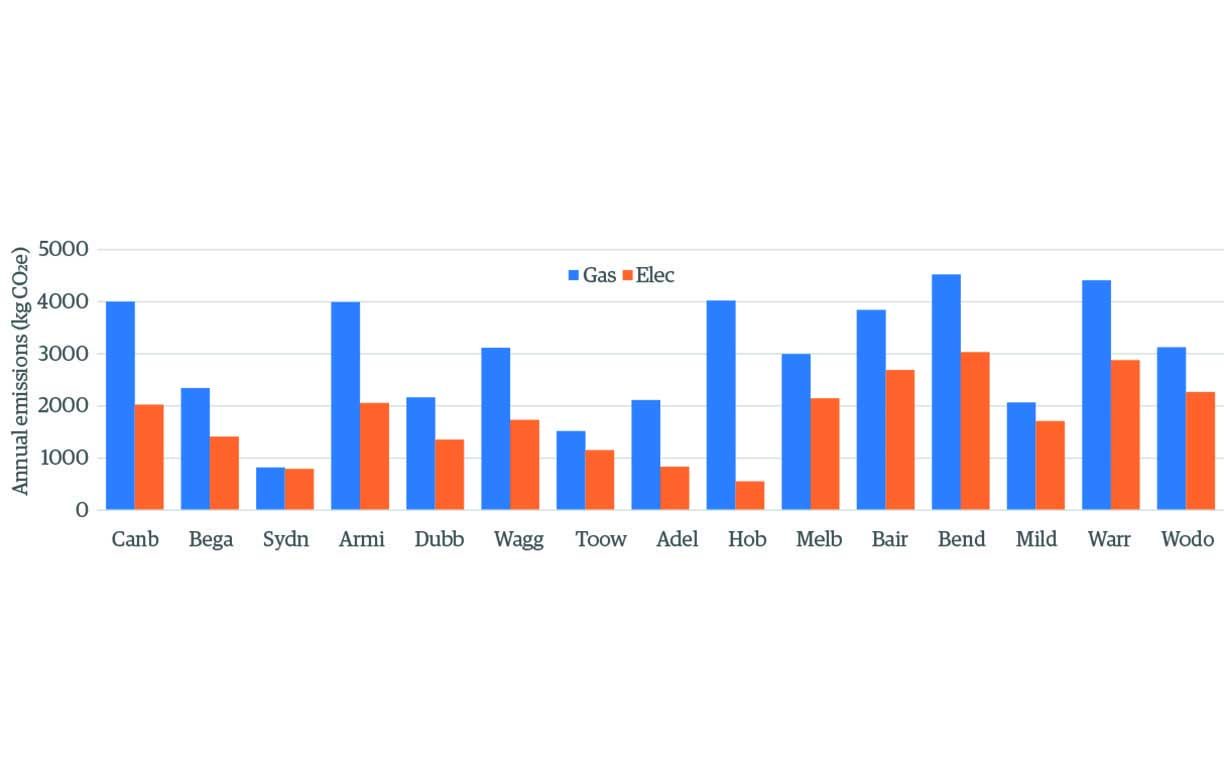 Figure 1. The reduction in emissions in medium-sized homes for electric space heating compared to gas is significant in all but one location. 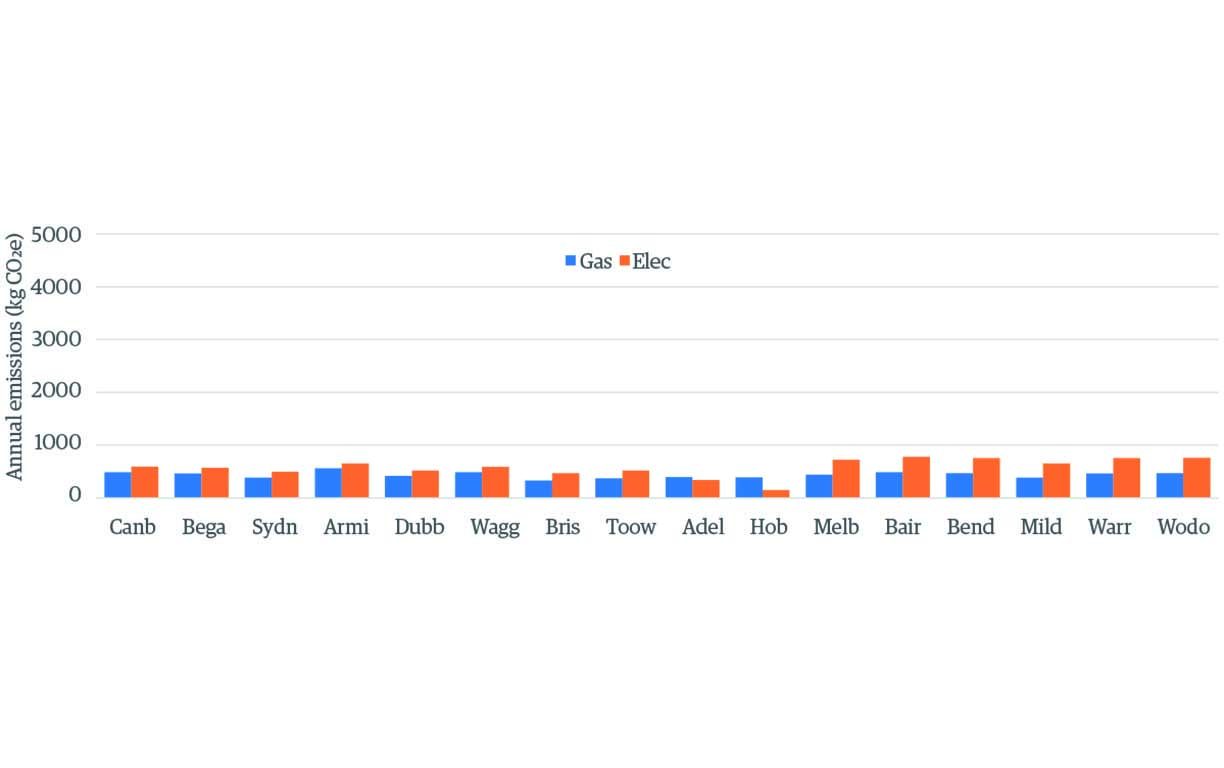 Figure 2. Differences in emissions for gas and electric water heating in medium-sized homes. Electric hot water gives a small emissions reduction in Adelaide and a significant one in Hobart, but a small or moderate increase in other locations. Similar results apply to cooking. 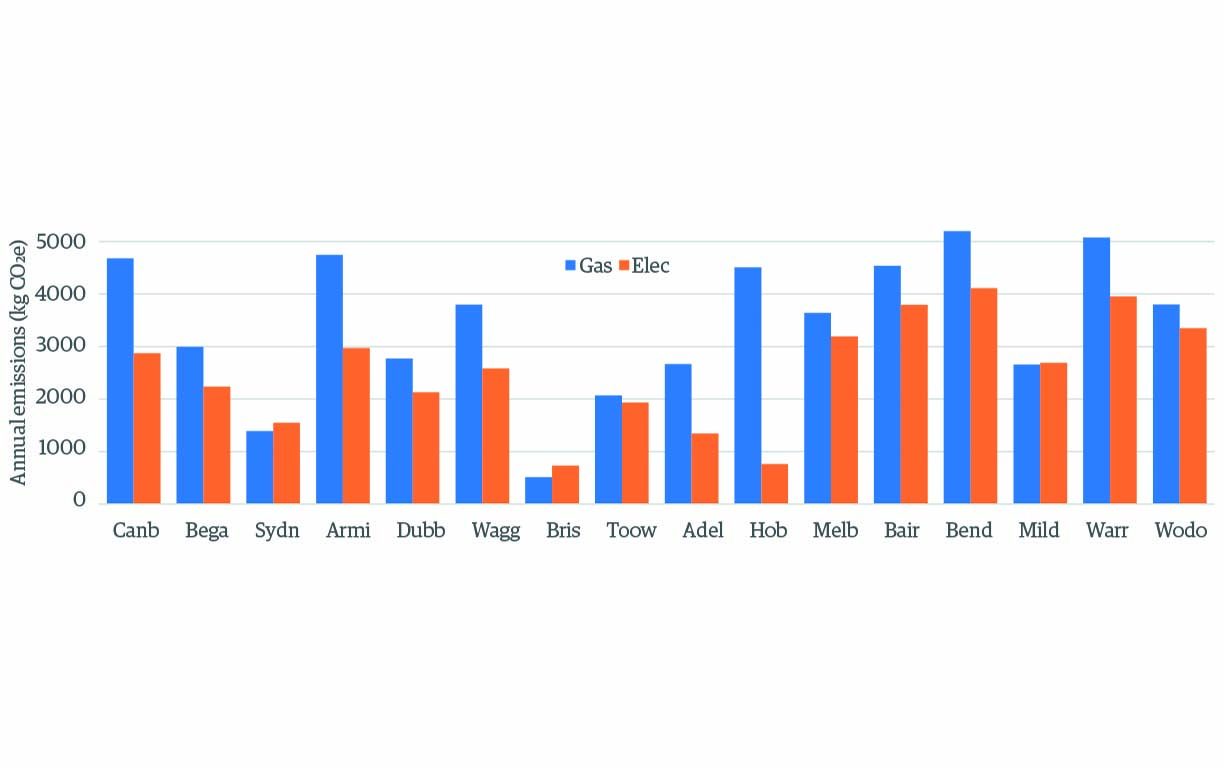 Figure 3. When combining electric space heating with any combination of electric water heating and cooking, there is a significant reduction in emissions impact in most locations. This graph shows the outcomes for medium-sized homes going all-electric for heating, water and cooking compared to the gas alternatives.

The findings generally support the case for electrification across all household types in most locations. This is due in large part to the emissions savings that can be gained by using reverse-cycle air conditioners instead of gas ducted or stand-alone systems for space heating. Their heat pump technology will always use energy more efficiently than burning natural gas, and heating volumes are high enough to make a substantial difference in emissions. This was even true for most of Victoria, a state with high space heating requirements due to climate and high emissions from brown coal electricity generation (Figure 1).

Emissions savings from electric water heaters and cookers were seen in a few locations, but in most places replacing just a water heater or cooking appliance with a new electric appliance will deliver marginally higher emissions than a new gas water heater or cooker (Figure 2). Electric water heaters and cookers delivered the best performance in states with low emissions-intensive electricity generation such as South Australia and Tasmania. However, it should be noted that the difficulty of establishing accurate emissions intensity of gas casts doubt over any marginally better performance for gas (see also ‘Problems with estimating gas emissions’).

Crucially, in most places (excluding Sydney and Brisbane, and small or medium homes in Toowoomba and Mildura), replacing a water heater or cooker with an efficient electric unit in conjunction with switching to reverse-cycle air conditioning for space heating will result in significant emissions savings compared to using equivalent new natural gas units (Figure 3). Any marginally higher emissions from electric water heating and cooking appliances are more than offset by the savings that electric space heating provides.

In one of the strongest findings, typical homes in Adelaide can halve their heating, cooling, and hot water emissions by using electric rather than gas appliances for all three. In Hobart the savings are more than 70%, reflecting the greenness of the grid.

For new homes with a 6 Star energy rating, the results are more marginal as energy use for heating (and cooling) is much lower. This highlights the importance of home insulation in lowering your carbon footprint. Similarly, smaller dwellings had lower emissions impact overall, regardless of the appliance mix (Figure 5). This demonstrates that, ultimately, reducing consumption is the best way to reduce your emissions impact.

As mentioned above, recent studies have called into question the accuracy of the measurement and reporting of GHG emissions from the natural gas sector, and emissions are likely higher than those given in the National Greenhouse Accounts used in this research.

So-called ‘fugitive emissions’ are released into the atmosphere throughout the process of extraction, processing and distribution of natural gas. These are not just unintended leaks or losses from network infrastructure, but also intentional releases from equipment such as pressure valves. Natural gas is primarily comprised of methane, which when released into the atmosphere before combustion is far more potent in terms of warming than carbon dioxide, which is released post-combustion. 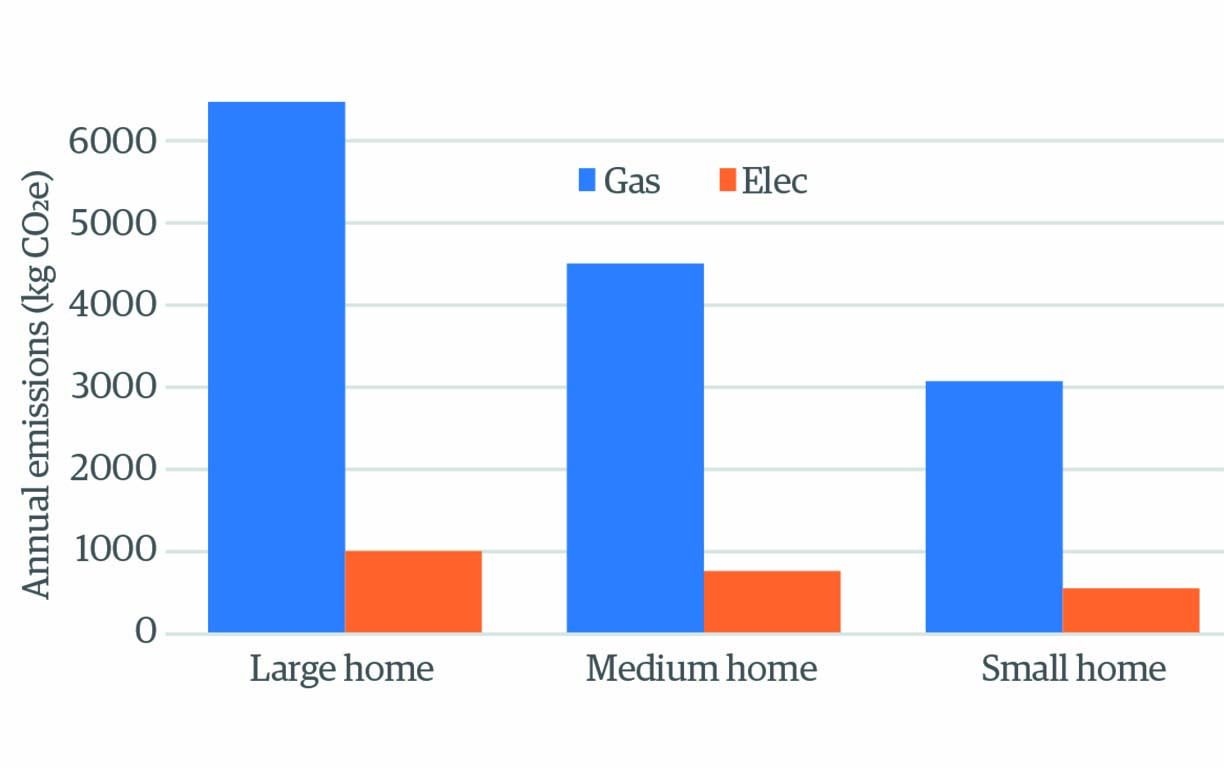 Figure 4. Emissions are much lower for electric appliances in all household types in Tassie—a sign of things to come on a greener national grid.

A 2013 study into the US natural gas industry found that methane emissions were underestimated by a factor of around 1.5. As a result, the EPA increased their official estimates of methane emissions from the upstream oil and gas production sector by 134%. The revision was largely due to previously undetected periods of abnormally high emissions throughout the supply chain; these were only identified with more rigorous testing regimes and new measurement techniques such as satellite imaging. Australia has seen no such attempt to increase measurement accuracy. The United Nations has requested that Australia improve its methodologies for the purposes of international reporting requirements.

Future emissions for gas vs electricity

Emissions from electricity generation are expected to reduce by at least 8% of 2017 levels by 2020. This is in the absence of future policy measures to reduce emissions at the state and federal levels and is therefore a conservative estimate.

Given the long lifespan of major household appliances, choosing to electrify when it is time to replace old units will position households to take advantage of this future trend. It will also enable consumers to make the most of existing or future home generation and storage (such as solar panels and batteries) to power heating, hot water, and cooking appliances; natural gas appliances have no such potential.

What it means for consumers

Switching all appliances to electric rather than natural gas will lower emissions in all locations except Sydney, Brisbane, and small and medium homes in Toowoomba and Mildura, where emissions will rise slightly. However, even in these locations it is likely that the continued decrease in the emissions intensity of the electricity grid in the near future will lead to some emissions saving over the lifetime of a new electric appliance; and the likelihood that official gas emissions (used in this study) are underreported may mean that the emissions outcome of a switch to electric is already neutral or slightly positive.

For those just switching space heating, choosing new reverse-cycle air conditioners for space heating rather than gas appliances will save significant emissions in most locations in the NEM and, as established in Renew’s economic report, most consumers would also stand to save money by making this switch.

Fitting out a new home as all-electric is likely to be emissions-neutral or emission-saving compared to a dual-fuel fitout—if not immediately, then in the near future. 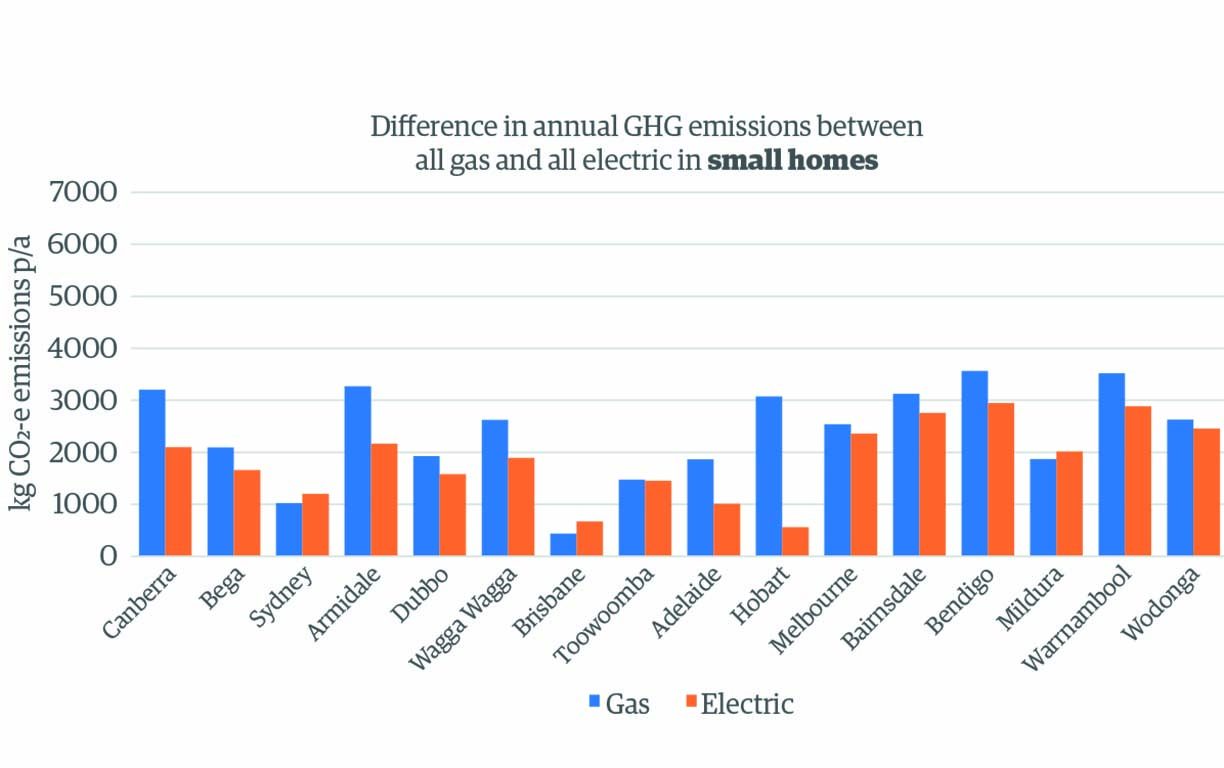 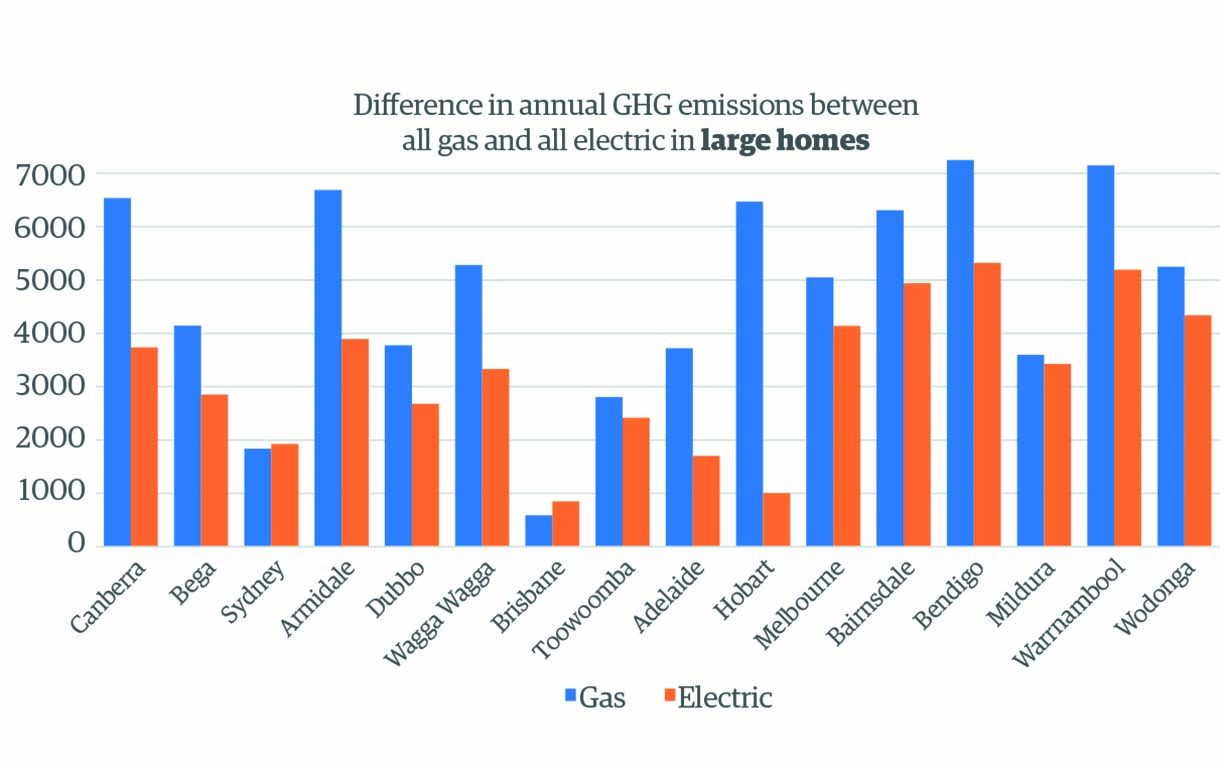 Figure 5: The emissions reduction benefit (compared with gas) of the higher energy efficiency of heat pumps increases with the size of the system and heating needs. Thus the relative and absolute emissions difference between electric and gas appliances increase with dwelling size.

Residents of Hobart who wish to lower their carbon footprint should not be connected to natural gas, as clean hydro power in Tasmania makes natural gas appliances far more emissions-intensive than electric units (Figure 4). This is a sign of things to come on a greener national grid.

Rooftop solar is another way to decrease emissions in conjunction with electrification of appliances. Improving home insulation and ensuring that new builds have a high energy efficiency rating is also a sure way to reduce your carbon footprint: reducing overall energy consumption is a guaranteed way of lowering emissions.

Investing in a low-emissions future

Renew’s research, along with existing studies and academic literature on household fuel choices, demonstrates a strong case for home electrification. The data from this study shows that throughout the NEM, most households would generate fewer GHG emissions when heating with efficient reverse-cycle air conditioning instead of gas units. Although gas hot water and cooking appliances still produce lower emissions than their electric equivalents in most areas, the difference is increasingly marginal and, because the emissions intensity of electricity networks will continue to decrease into the future, households making the switch to electric appliances today are investing in a low-emissions future.

The full report will be published on the Renew website in the near future.

Rory Anderson
Rory is a recent Master of Public Policy graduate with a strong interest in climate policy, who conducted this study as part of his final policy and research project placement at Renew in 2018. Additional work by Dean Lombard and Keiran Price, Renew Energy Analysts. 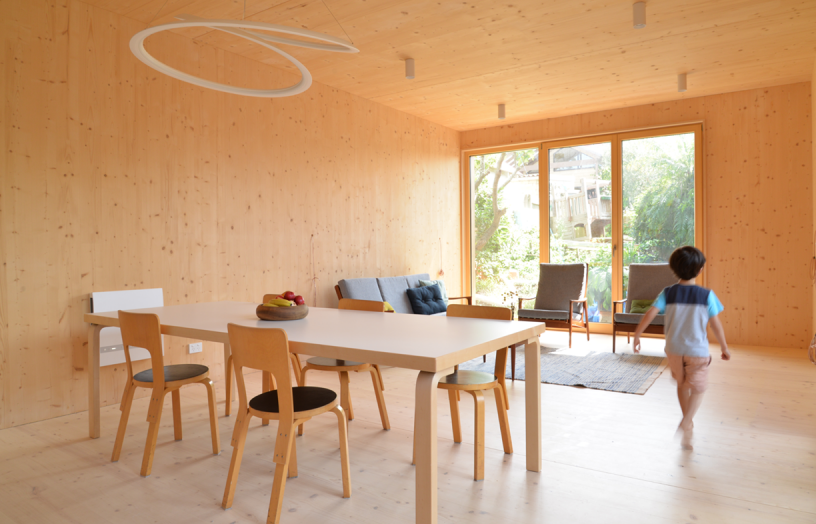 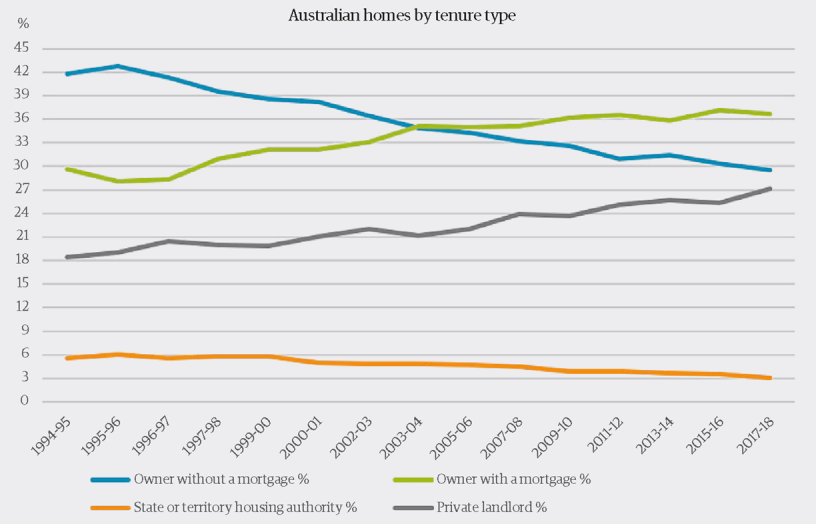 A new lease on sustainability 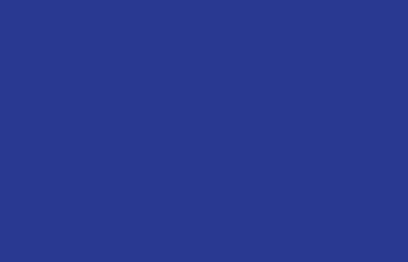