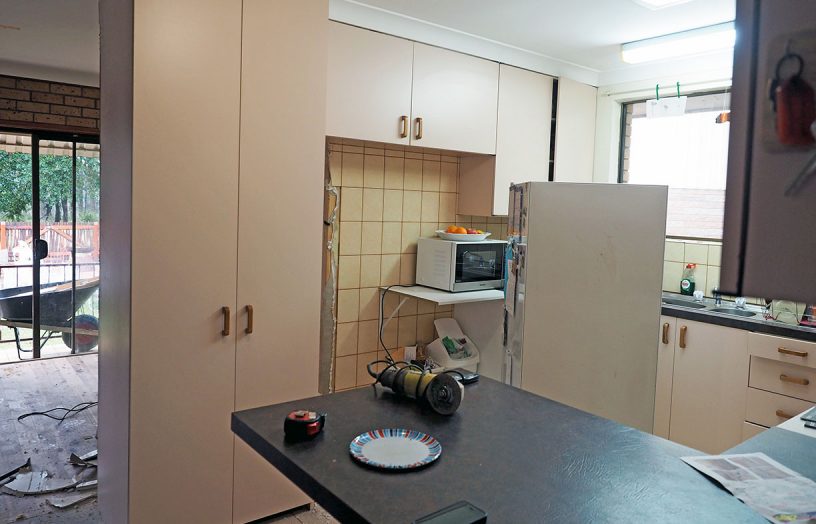 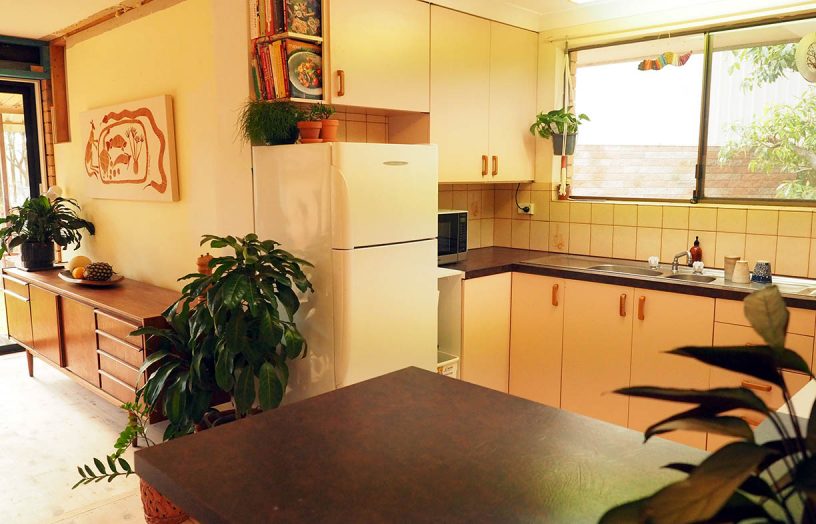 (Left) Before: the kitchen with the pantry that blocked the view to the garden and made the entryway narrow and the kitchen dark. Image: Katie Moon (Right) After: with the pantry removed, the kitchen is brighter and more open. A restored sideboard was added to provide extra storage. Image: Mitch Lightfoot

Should you reuse a functional but dated kitchen? What do you do with a concrete path removed from your garden? Katie Moon describes how she and her partner Tom Brewer went about upgrading their family home.

We bought our first home 18 months ago on the south coast of NSW. It’s a double-brick, three-bedroom, tiled-roof house with aluminium windows, well suited to its salty environment. It’s perfectly functional, yet, to be able to live the semi-self sufficient life we’ve always aspired to, we decided that we’d like to make a number of changes to the property.

Ever since, we have been engaging in a delicate dance of choice-making, which has involved educating ourselves about the quality, function and composition of different materials; understanding the ethical (and not so ethical) production of different goods; and renovating with as small a footprint as possible. Unfortunately, the system hasn’t felt like it’s been geared in our favour—information can be absent or confusing, ethical choices can be completely outside of our budget and performance of individual materials can be difficult to prioritise when they only comprise a small change to our otherwise moderately-performing house.

We’ve also had some disappointing experiences: some products that we spent quite a lot of money on because of their environmental credentials have not lived up to expectations (e.g. we purchased some high-performing electrical items and half of them have had to be replaced). Due to shading from a neighbour’s house and trees, we were also unable to justify solar power and have come to the disappointing conclusion that we’re unlikely to be able to take advantage of passive solar heat gain.

But we have had some excellent wins and found some great workarounds. It helps immensely that we share values around how we want to live, so we’ve been able to invest our budget in ways that are meaningful to us. We are starting to experience some momentum from this meaningful investment, particularly in terms of making choices that fit with the simple reduce–reuse–recycle model, which has served to increase the ease of our decision-making, decrease our spending and remind us of what we consider important.

After many discussions and much research, we’ve decided to keep the original kitchen. The kitchen works, and while perhaps not ‘on trend’, we have found through our renting years that older-style kitchens can work very well, in terms of function and design.

It can be hard to practise what you preach though, denying yourself things like easy-slide drawers. But we also consider that even just a little hardship, like having to reach into dinky corner cupboards, can be a useful reminder that life doesn’t have to revolve around convenience. 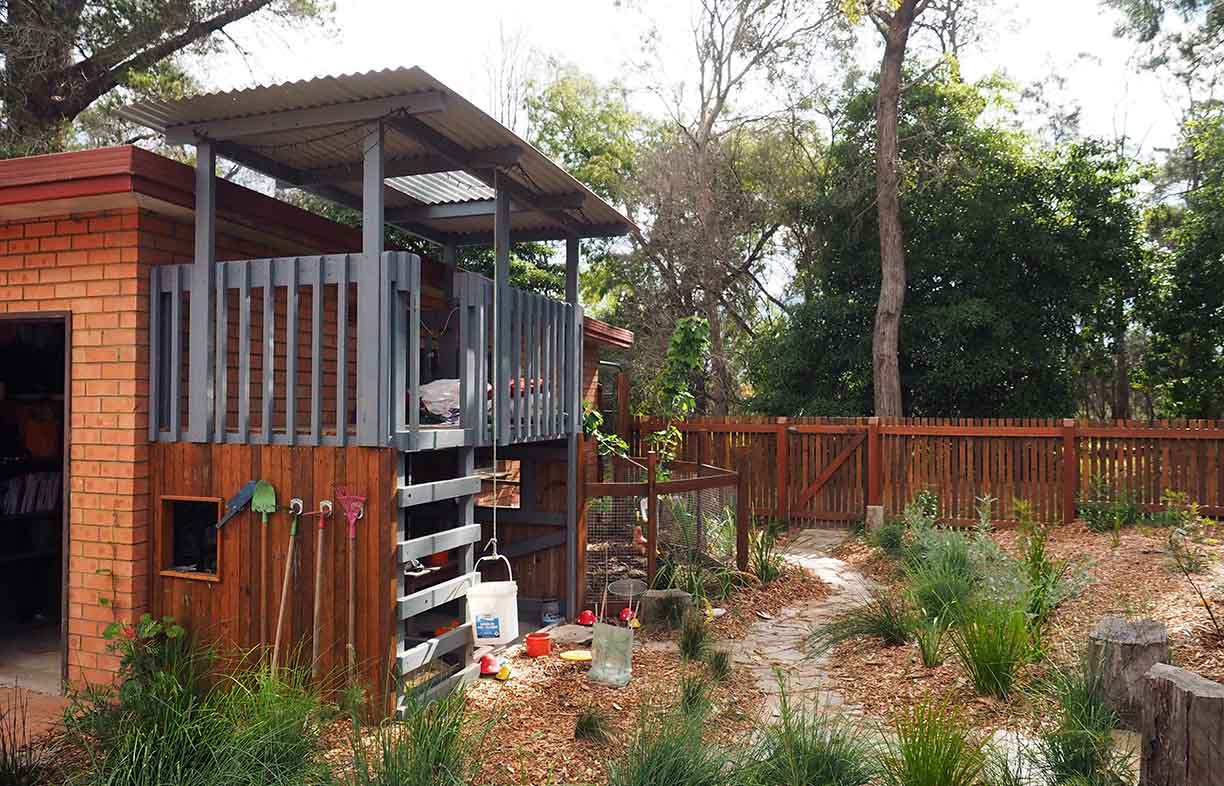 Instead, we’ve been able to freshen up the kitchen starting with removing the pantry. This both opened up the space and provided views to the garden. We then reorganised and rejigged—we created a small cookbook shelf from the end of a cupboard that was exposed after removing the pantry; restored an old Parker sideboard (which was painted black) that we picked up for $35 at a local charity shop to add extra storage to the kitchen; made some DIY hanging planters for the kitchen window and placed some foliage-rich plants and herbs on the benchtops to bring in some greenery; and put up some photos of our travels with the kids on the walls.

I also worked with my parents to restore a mid-century timber dining table and chairs that I picked up for $70, contributing to the natural feel of the kitchen refresh. We’ve been seeking out good quality secondhand furniture as part of our upgrades— more affordable pieces that need some restoration. These small and inexpensive changes have altered the entire feel of the kitchen and quashed any desire to replace it.

Reuse in the garden

One of the first things we committed to do was establish some wicking beds in our front yard to get going on food production. We reused as many materials as we could. We purchased some plastic liner, then for the aggregate we crushed some old bricks that were lying around the property, as well as some river pebbles from along the driveway that we had removed to plant citrus trees. Next, we laid some carpet that we’d ripped up from inside. We then laid some greenwaste compost from the local transfer station before putting in our soil and erecting some second-hand steel frames to trellis our climbing plants. We water the beds less than once a month and have been able to grow all sorts of vegetables over all seasons.

Next, we were keen to remove the 100 m2 of concrete that took up half of the backyard. Although we really wanted to make this task our first, the cost of hiring an excavator and the landfill fees scared us off for several months. Serendipitously, we drove past a concrete recycling plant that’s a couple of hours from our house and enquired as to how much it would cost to have a truck and trailer collect our concrete for recycling. It turns out that it was less than $1000, which was a bargain compared to the $3000 we would have had to pay in local tip fees alone. We figured the carbon emissions from the truck would definitely be offset by the recycling of the material so that project felt like a real win-win. 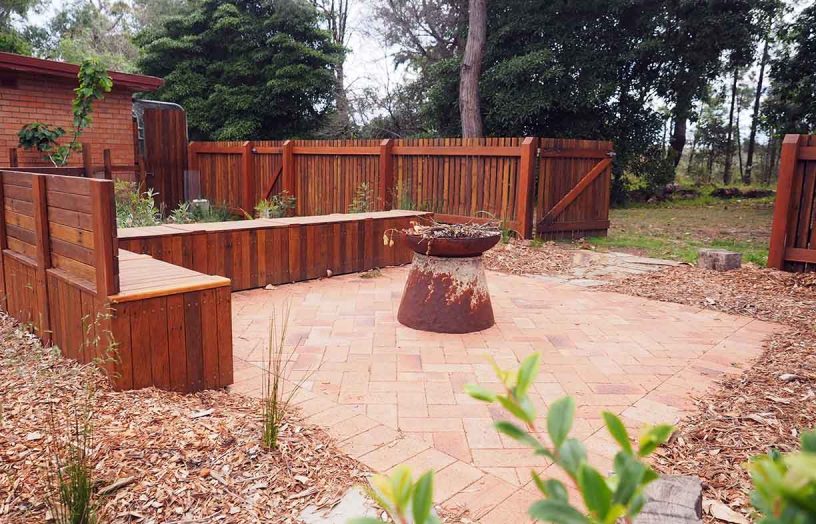 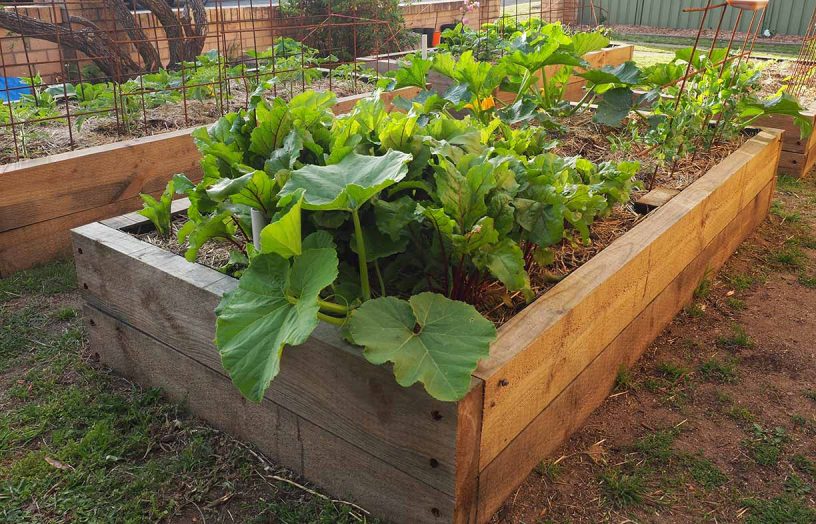 (Left) A fire pit made from upcycling a disused concrete mixing drum and a bench seat made from reused decking timbers. The back fence opens onto an adjacent reserve. (Right) The wicking beds rarely need watering, less than once a month. Images: Mitch Lightfoot

We then landscaped our backyard with almost entirely reused or upcycled materials. While we were grateful for all offers of materials, we were somewhat selective because we did want to achieve a particular aesthetic. We were gifted some local shale that we used for garden paths, we reused our friends’ pavers for both a utility and fire pit area, and we upcycled a disused concrete mixer into a fire pit by cutting the base off the drum and placing it on top of the opening.

We purchased 400 metres of secondhand timber decking for $250 that we used to build the back fence, along with locally-milled ironbark for the fence posts. With the leftover decking timber, we clad the kids’ cubby, which had been made from timbers of a wall we’d pulled down from inside the house. We painted the cubby with leftover exterior paint that was also given to us. The old cyclone wire fence we’d replaced was repurposed as a cover for our chicken coop, which includes a nesting box made from old pallets.

Finally, we were ready to plant out our native garden. We chose species that were endemic to the region and available at the local Eurobodalla Botanic Garden nursery. We took advantage of the local council ‘swap a weed for a native’ program, picking up a number of free plants. We supplemented our plant stocks with suitable species sold by local nurseries at the Moruya markets. We bought quite a number of edible natives too, including lilly pillies, saltbush, pigface and warrigal greens. It is immensely enjoyable to see the kids foraging in the garden and we were thrilled to share all of our efforts in the garden on Sustainable House Day earlier this year.

Our most recent, and biggest, project has been installing some locally made double-glazed doors and windows that allow us to look out into our garden and, beyond, to a stunning coastal river. Looking around our (still under construction) home and out into the garden is such a wonderful reminder of how our meaningful choices have allowed us to create a home that embodies our values and our labours and that, importantly, has not come at a significant environmental cost.

Author
Katie Moon is a social scientist, with a research focus on environmental stewardship.