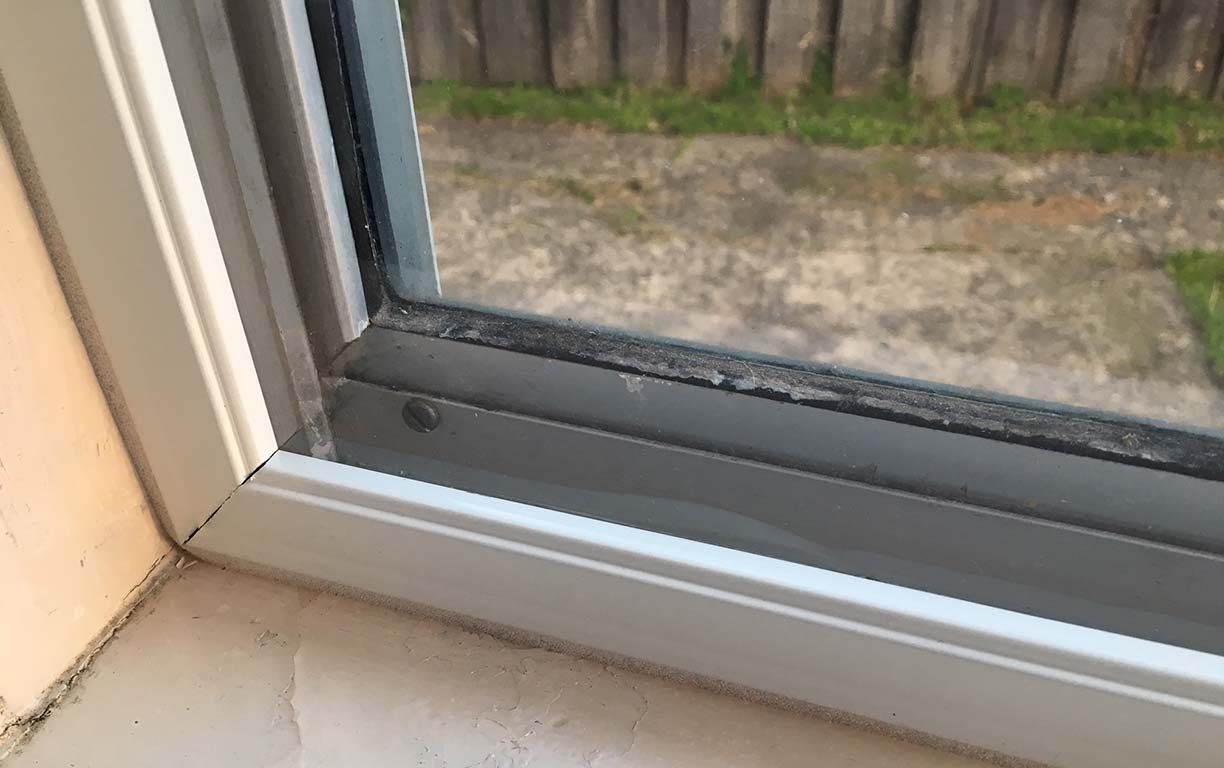 A finished frame in position. There is a gap between the film/sheet and the original glass that traps air, acting as an insulating layer. Image: Lisa Rime

Single-pane aluminium windows are great for low maintenance, but they’re absolutely terrible for letting heat in and out of the home, with both the frames and glass being very thermally conductive. In winter, the warm air inside meets the cold window and the result is usually streams of condensation which can damage the window frames and encourage mould growth.

One solution is to apply a DIY double-glazing film to the window to create an air gap that provides good insulation.

DIY double-glazing film is a clear plastic film, similar to cling wrap, which you can attach to the window frame using double-sided tape. But this approach works best for windows with timber frames—timber has a reasonable insulation value and the roughly 10 mm thickness of the frame allows an optimal layer of air to be trapped.

With aluminium windows, the frames are too thin, allowing only around 2 mm to 3 mm of air to be trapped. This is not enough to provide effective insulation, and also doesn’t do anything about the frames conducting heat. Some double-sided tape used in these kits also doesn’t adhere well to some types of aluminium finish.

So what can you do about it, especially if you’re in a rental house and can’t make any permanent modifications? You can easily build your own frames to fit inside the window sill which seal off the entire glass and frame!

You could make timber frames and finish them to your requirements (e.g. profile with a router, paint, stain, varnish). This will improve the appearance of old aluminium frames and provide great insulation value.

But making frames from scratch takes time and skill. A much cheaper and simpler way is to use an off-the-shelf material like flyscreen framing. This is easy to cut, join and ‘glaze’, and is quite cheap to buy.

My friend Lisa Rime has had great DIY success using these frames with clear tablecloth sheeting to insulate the windows of her rental house in Hobart. You can apply the same concept using window film, even applying a layer to each side of the frame to triple glaze your windows. The tablecloth material is stronger than the window film, but isn’t as clear or wrinkle-free.

This approach is also rental friendly by not applying any adhesives or fasteners to the dwelling, and the frames can be easily and quickly removed or modified if necessary.

They are also suitable for people considering more expensive double glazing options (using glass or acrylic secondary glazing layers, or replacing the windows with double-glazed units) to see how much of a difference double glazing will make.

If the film or vinyl is applied well it can last several years, but it can easily be damaged—however, replacing it is cheap and easy. Also, because the film is flexible, it provides none of the soundproofing benefits of rigid double glazing. 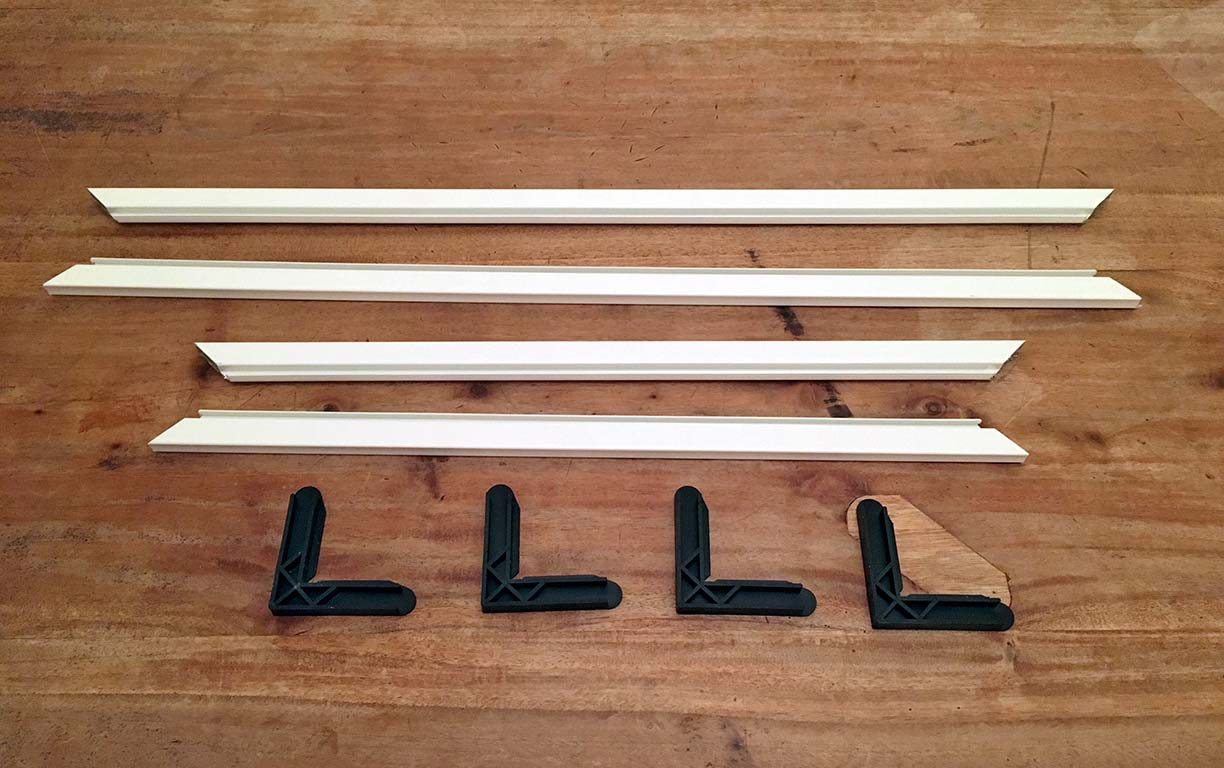 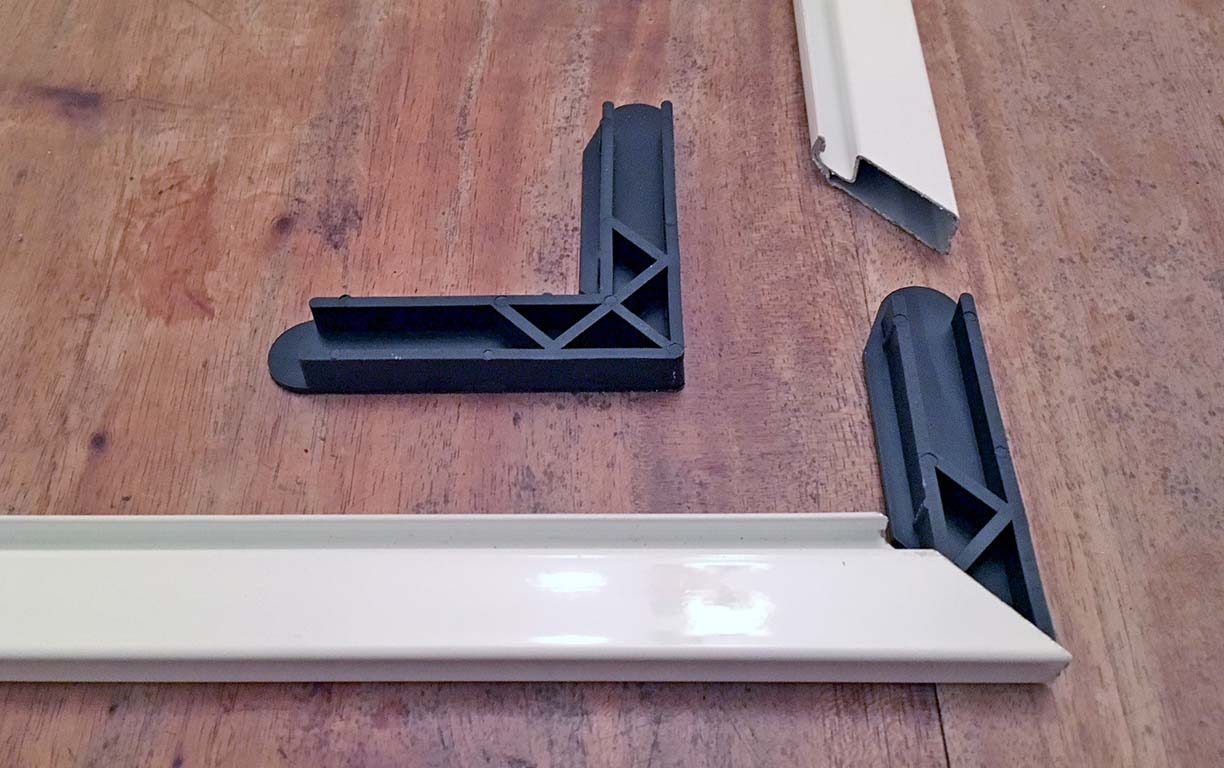 After measuring all four sides of the cavity, cut your frame pieces to size. The plastic corner pieces push inside the aluminium frames. Images: Lisa Rime

This approach uses thin vinyl tablecloth sheeting or window film as a double-glazing layer on the inside of the glass window. The vinyl or film layer is attached to a flyscreen frame that is ‘friction fitted’ into the window cavity. This method of frame construction will work for windows that:

Start by estimating and purchasing the right quantity of materials.

Carefully measure the window(s) you wish to fit and calculate the quantities of the flyscreen frame and vinyl/film you will require. Don’t just add up the total length of flyscreen framing and buy that much. Flyscreen framing comes in 2.5 m lengths which you will need to cut down to fit, so there will be some wasted offcuts. With a bit of sketching and basic maths you can add up the lengths required to use as much of each 2.5 m piece as possible, reducing waste.

If purchasing vinyl, take care that it doesn’t touch the floor or any dusty surfaces as it will pick up dust easily. It’s easiest to transport when folded very loosely.

First, work out the exact length for each of the frame pieces. To do this, measure the window cavity at the point where you want the frame to sit; the ideal position is about 10 mm to 20 mm out from the glass. Measure the four sides individually—this is particularly important in older houses where window frames may not be square.

The frame pieces have a gutter on one side, which you want on the inside edge of the frame once it’s constructed. Cut each piece of frame to the required length with a hacksaw and a mitre box allowing for about a 3 mm to 4 mm gap between the inner edges of the window cavity and the outermost tips of the flyscreen frame lengths, and cutting the ends at a 45 degree angle, so that the gutter is on the inside edge. A mitre box helps with getting the angle right: it’s a three-sided box which is open at the top and the ends, wide enough to accommodate the width of the material to be cut. Slots cut in the walls of the box at the angle at which the cut is to be made (usually 45 and 90 degrees) guide the saw.

Push the corner pieces into the end of each frame piece to join them together. Take it to the window cavity to check how it fits before continuing. It should be able to sit within the cavity without friction, but with no more than a few millimetres clearance between each edge and the window cavity.

Now do either step 3a or 3b, depending on whether you are using vinyl or window film.

3a. Attach the vinyl sheet

Clean up your work surface or move to a clean one. The vinyl is prone to electrostatic charge and will attract dust very easily but is hard to clean.

Lay your frame down flat with the gutter facing upwards. Lay the vinyl on the top and flatten it out. Cut around it so that you have 50 mm or so extra material around the frame.

A good technique is to put the first peg in the middle on one side (tucking the excess vinyl under the frame as you go), then in the middle on the opposite side, then do the same for the last two sides. Next pull at the corners and peg from the centre pegs out to the corners. 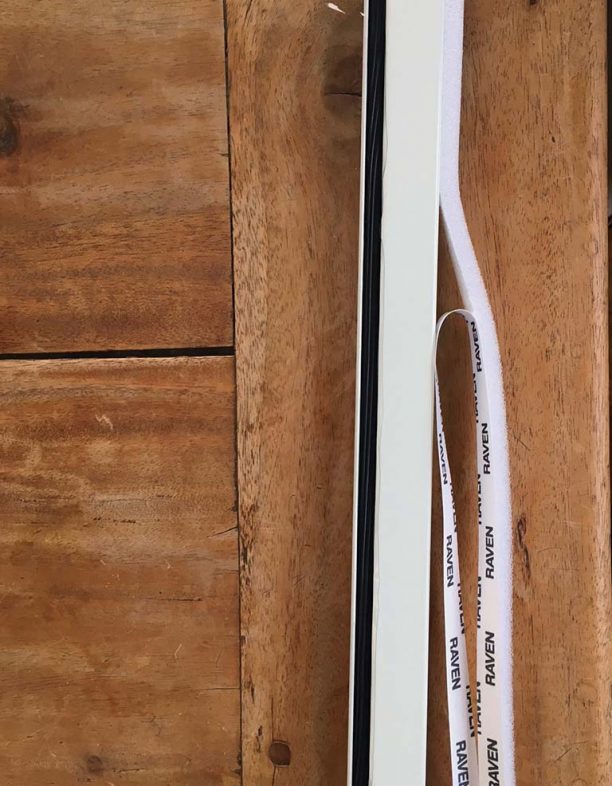 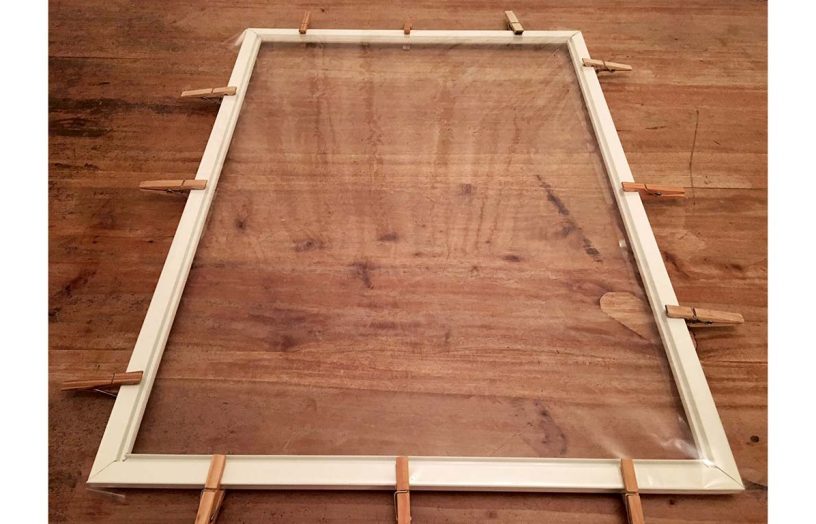 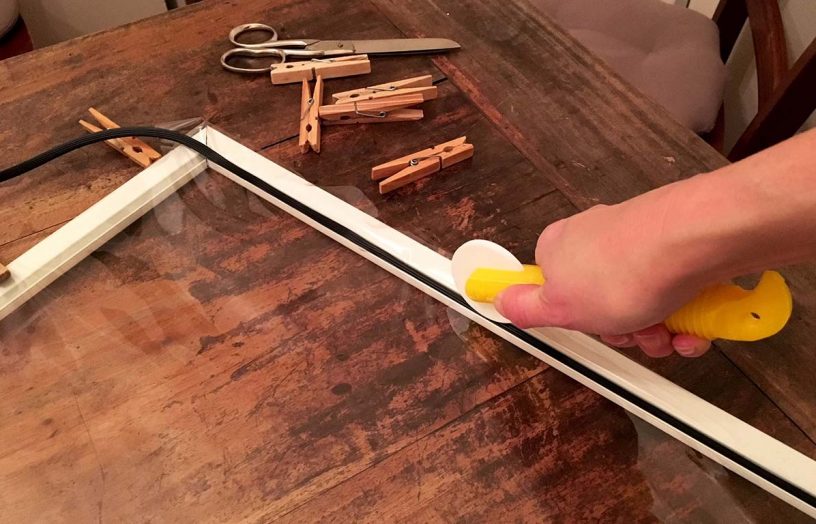 For the vinyl sheet method, you lay the sheet over the frame and hold in place with pegs. Then lock the sheet into place using the flyscreen spline. For the window film method, you stick it to the frame with the supplied double-sided tape instead. Lastly, you attach adhesive weather seal foam strip around the entire perimeter of the frame. Images: Lisa Rime

Now it’s time to put in the spline rubber. Start at a corner and work along the shortest edge first. Use the spline roller to push the spline into the gutter so that the vinyl is held firmly in place. Remove the pegs as you go. When you have made your way around the entire frame, trim the remaining spline off.

Trim off the excess vinyl with scissors, but leave a tab of vinyl at the centre of each side. These tabs can be handy for adjusting and removing the frame from the cavity later on.

3b. Fit the window film

Clean up your work surface or move to a clean one. Lay your frame down flat with the gutter facing upwards.

Make sure the frame is clean and grease-free so the tape adheres well. Wipe down with some methylated spirits if necessary. Allow to dry properly before applying tape.

Unfold the film ensuring that layers are not stuck together and cut roughly to the size of your frame, allowing at least 20 mm extra on all sides. You can trim the excess later.

Remove one side of the backing paper from the double-sided tape and stick the tape to the frame, making sure there are no gaps where the corners join. Before removing the other backing paper, press down with the back of a spoon to ensure the tape is firmly attached to the frame.

Stick the film to the tape, repositioning and stretching the film to ensure there are no wrinkles attached to the tape. Wrinkles and slack within the window frame are not a problem. Most people find it easiest to roll up the film, stick one edge and gradually unroll it down the frame.

Remove any remaining wrinkles with a hairdryer by starting in a corner and working methodically across the window, taking care not to touch the film with the dryer. Trim off any excess film beyond the line of the tape with sharp scissors or a craft knife.

If desired, turn the frame over and repeat on the other side for extra insulation.

4. Seal the edges of the frame

Stick the window and door foam to the outer edge of the frame, working your way around the entire frame.

5. Fit the frame into the window

Gently push your finished frame into your window cavity so that it creates a space between the new frame and the glass of 10 mm to 20 mm. It should fit so that the foam is pressing firmly against the window reveal, sill and head, creating an airtight seal.

If you are making frames for corner windows, foam gap filler rod can be pushed into the corner to take up the space between the two frames so that they sit firmly in place. It is available in various diameters to suit different windows.

Authors
Glenn Newman
Glenn has worked at the EnviroShop for more than 12 years and has qualifications in Renewable Energy Technologies and Building Design. He’s also been a rental tenant in many terribly inefficient houses for more than 25 years.
Lisa Rime
Lisa is an artist who lives with rheumatoid arthritis in Hobart. Her invention is a product of her family’s need to live in the cold climate on a low income—amid a state-wide rental housing crisis. In the past, Lisa has designed, drafted plans for and built a sustainable pole-house in Tasmania.