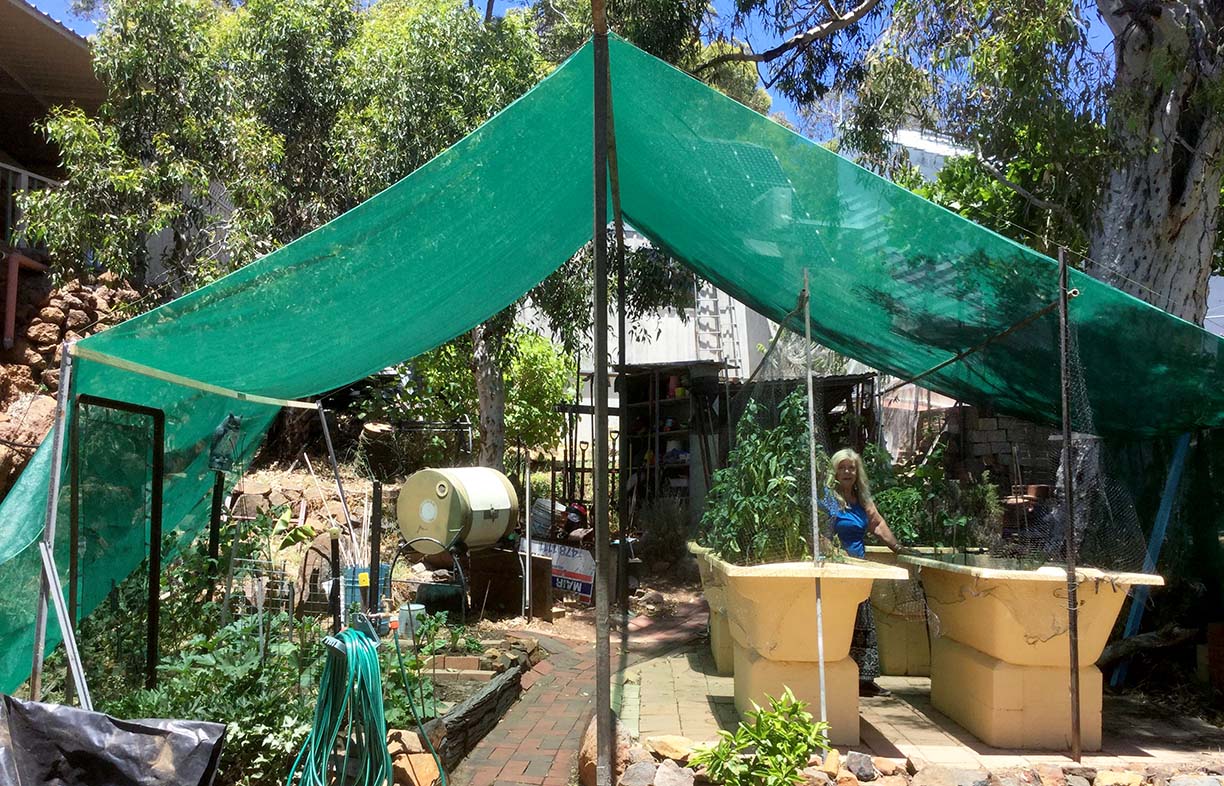 The all-season vegie tent is 4 m high at the ridge line, meaning it has worked well in both summer and winter.

One reader, Brian Mollan, describes his solution to the problem of summer scorching of his vegies—and it can even be left in place in winter.

Our vegie patch was getting scorched by the West Australian summer sun, such that no vegies survived the summer.

We needed shade and we settled on providing a shade-cloth ‘tent‘ for the vegies. Here’s how we went about it.

When we bought the block on which we built our house, there happened to be some old two-inch (in old money) water pipes lying near the bottom boundary fence. As an avid recycler, I said, “they’ll come in handy someday.” And 45 years later, they did—as the uprights for our vegie shade tent.

I used the two 4 m long pipes as the uprights for the tent. When mixing the concrete for the base of one of these uprights, I used the nearest available water which was in a watering can. Only later, when my partner asked what happened to the contents, did I discover that it contained liquid fertiliser. There is no indication that this has had any adverse effect on the strength of the concrete!

I used one of the two 5 m long pipes as the ridge line. I had also been storing a couple of old scaffolding joints that “would come in handy someday” and I used these to join the uprights to the ridge line.

The shade cloth came in a standard width of 3.66 m and I used an 8 m length. I used the other 5 m piece of pipe to form the top of  one side wall and I bought a suitable bit of timber to create the other. The side wall frames were braced either to convenient trees or by using available star pickets or metal tubes. I had been “looking after” long lengths of old copper electricity cable and I used this  to brace the ridge line and side by tying them to suitable bracing points—these will never rust or rot like rope.

To provide strength and flexibility for the shade cloth, I secured the bottoms of the side walls to timber battens. I held down the ends of one side wall batten with old trampoline springs (that “would come in handy someday”), while the other I weighted down with a couple of bricks. However you do it, just make sure the cover is tied down securely and can’t be ripped off in a high wind; star pickets should be driven at least 500 mm into the ground.

The shaded area ended up as 3.66 m x 6.8 m. The original intent had been to remove the shade cloth in the winter. However, the height of the ridge line (4 m ) and the north–south orientation allowed winter sun into the vegie patch, so the shade cloth has now been permanent for a couple of seasons. It creates a beneficial microclimate that is noticeably cooler and the soil retains moisture better. Incidental benefits are that the shade cloth keeps off gum leaves, twigs and possum poo emanating from a large, nearby wandoo tree.

The vegie tent has survived very strong winds and storms and enabled near year-round vegie production. Although I’m in no doubt that it could be improved, I would challenge anyone to construct it using so much recycled material!

Author:
Brian Mollan
It’s all Al Gore’s fault—after seeing his film, An Inconvenient Truth, Brian started on a journey. Now his transport is electric, he has 11 kW of solar PV, 22 kWh of batteries and he currently stores 12000 L of rainwater.